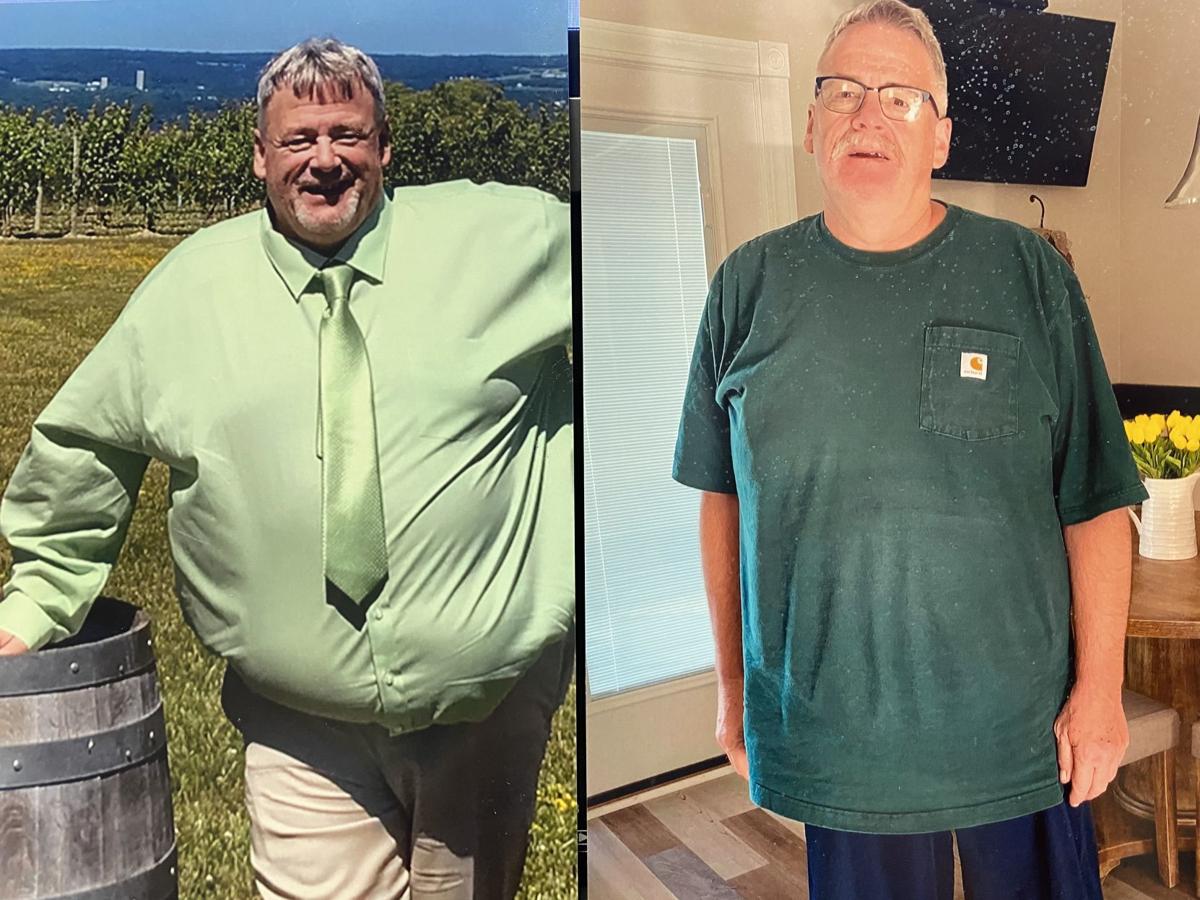 This before-and-after shared by Guthrie shows how David Park has changed with his 100-pound weight loss. 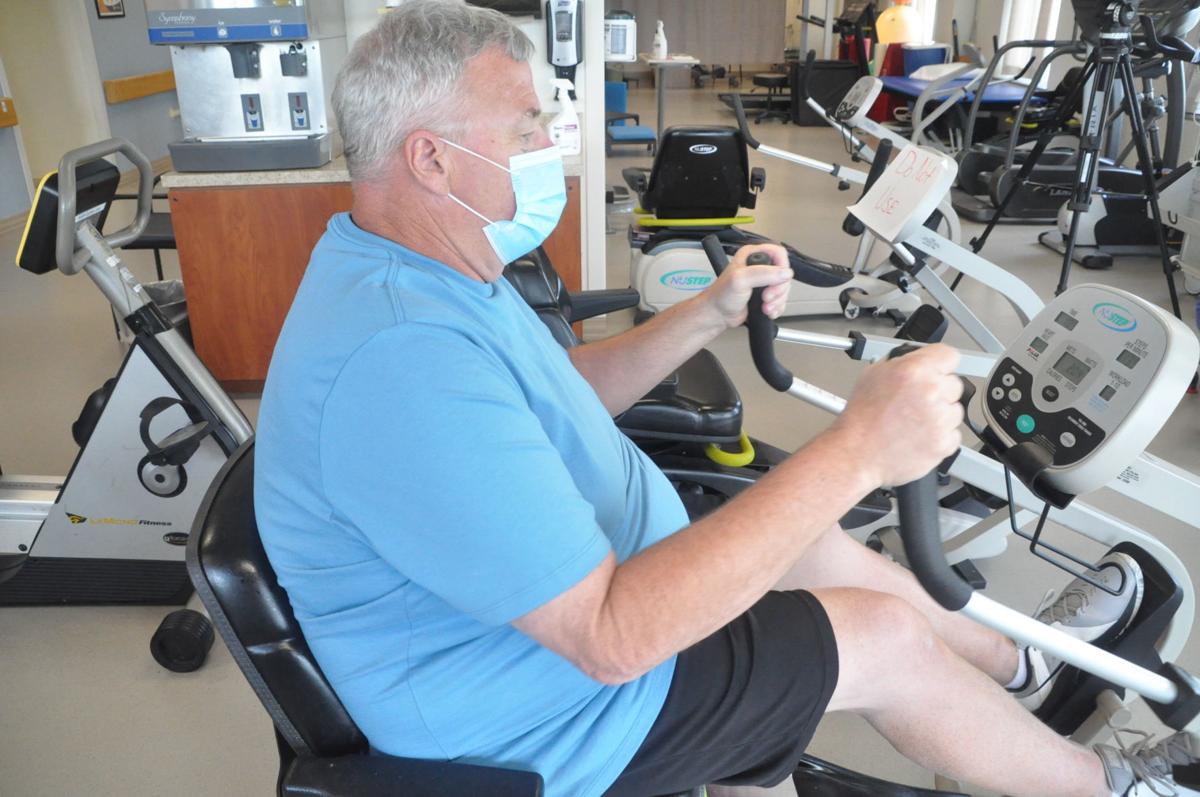 David Park is pictured exercising on one of the machines in the Guthrie Robert Packer Hospital Cardiac Rehabilitation department. 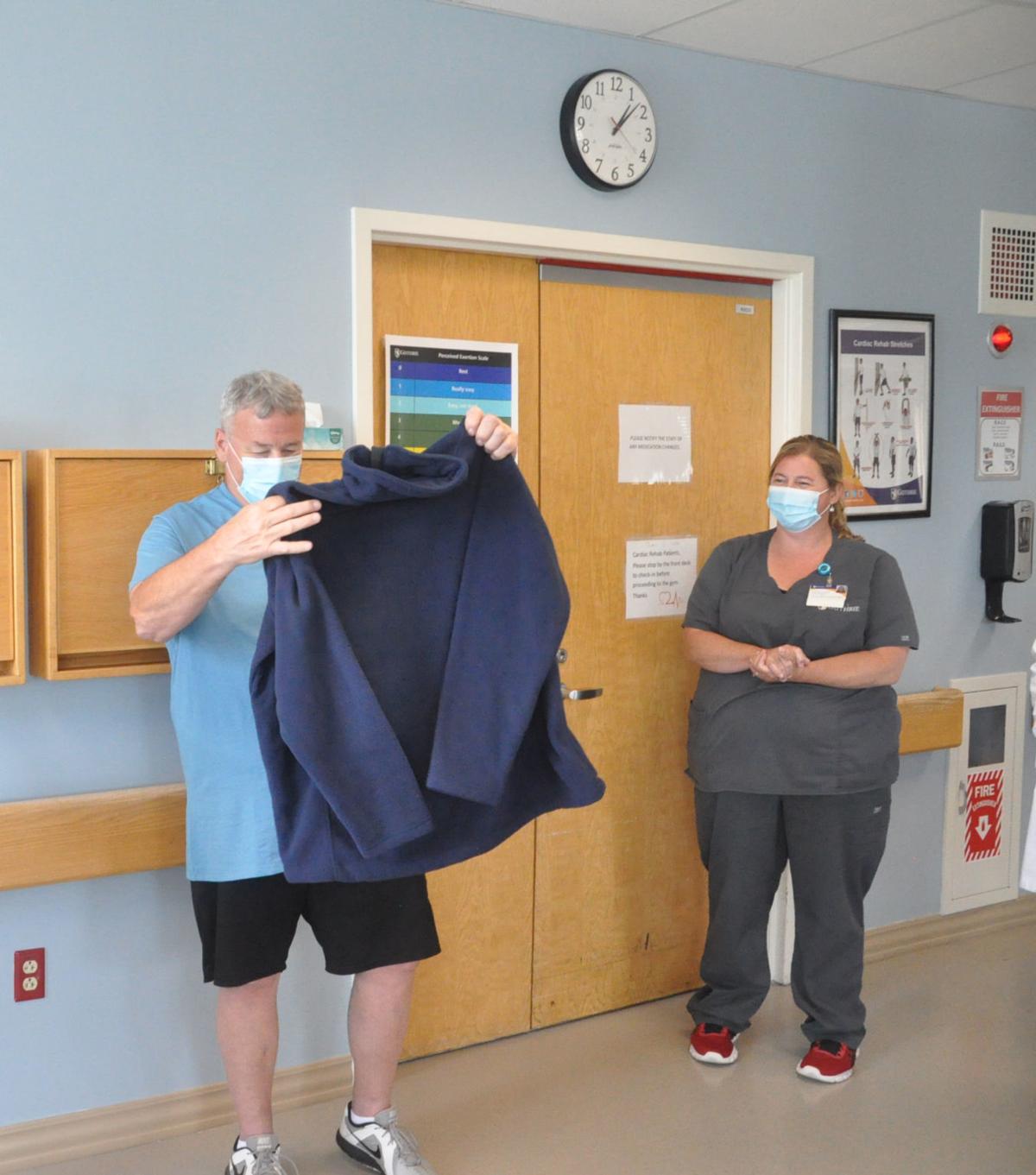 David Park checks out a fleece he was gifted during a celebration of his 100-pound weight loss in the Guthrie Robert Packer Hospital Cardiac Rehabilitation department as Laura Meagley, an exercise physiologist and team leader, looks on.

This before-and-after shared by Guthrie shows how David Park has changed with his 100-pound weight loss.

David Park is pictured exercising on one of the machines in the Guthrie Robert Packer Hospital Cardiac Rehabilitation department.

David Park checks out a fleece he was gifted during a celebration of his 100-pound weight loss in the Guthrie Robert Packer Hospital Cardiac Rehabilitation department as Laura Meagley, an exercise physiologist and team leader, looks on.

SAYRE — South Waverly resident David Park says before starting his weight loss journey 13 months ago, he would have to take three or four breaks while pushing his mower across his small lawn.

“I was exhausted,” he said. “Now I’m mowing our yard, I’m mowing my two neighbors’ yards without stopping at all.”

That was while weighing in at 357 pounds. Park is now just over 100 pounds lighter, which was cause for recent celebration inside the Guthrie Robert Packer Hospital Cardiac Rehabilitation department.

It all began with “a very blunt conversation” with primary care physician Dr. Carli Yeager-Hall, who remembered telling him, “It doesn’t seem like you want to live.”

Before that conversation, Yeager-Hall said Park didn’t seem willing to listen. After it, she said they’ve enjoyed a great doctor-patient relationship that has included setting weight loss goals and follow ups to help reach those goals.

“And he’s just been doing fabulously over the past year,” she said.

Before the weight loss, Park also had to have two heart surgeries. The first stent was put in three years ago by Dr. Sudhakar Sattur.

“I lost a bunch of weight, but then got stupid and had to have a second procedure done,” he said, noting that he had put on 30 pounds in about six weeks. During that time, Sattur remembered that Park was not doing well and wasn’t happy.

It was after that second surgery — combined with the stern conversation with Yeager-Hall — that Park knew he had to do something or he wouldn’t be around much longer.

Shortly after starting his weight loss journey, Park said he retired from Global Tungsten and Powders Corp. after 37 years with the company, which both freed up time to dedicate to his health and reduced his stress level.

Now, in addition to working out in Cardiac Rehabilitation twice a week, Park is an avid walker who can be seen all around the Valley — even in the winter, which is his favorite time of the year to walk.

“When I started, I was going a half mile and it was just killing me,” he said. “Now I’m up to averaging six to eight miles every time I walk.”

The first 30 pounds came off easy, as it can with anyone who is overweight, Park pointed out. The remaining weight has been much more difficult, with Park aiming for two pounds each week. Even when he reaches his goal of 220 pounds — his heaviest in high school — Park has no plans of stopping.

Because of his weight loss achievement, Yeager-Hall uses Park as an example for her other patients. And now at the age of 62, Park says anyone can do it if they put their mind to it.

“There’s days that I don’t feel like walking, but I go walking and I feel great when I get done, I feel like I’ve accomplished something. Don’t let your mind tell you that you don’t want to do it today or you can’t do it today, because you can.”

Helping inspire him along the way has been his wife Deb, along with department RN Jill Bernett, and exercise physiologists Paul Cuda and Laura Meagley.

They, along with the doctors and other staff, were there to cheer him on during the celebration. For Park, it meant a lot to have them all there.