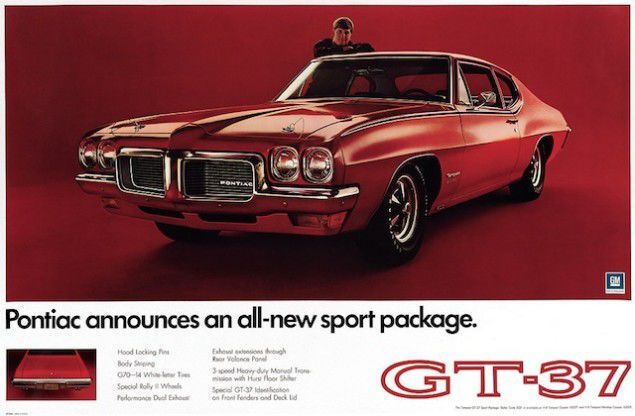 Advertisement for the powerful 1970 Pontiac T-37 and GT-37, which were stripped down GTOs with optional GTO engines. 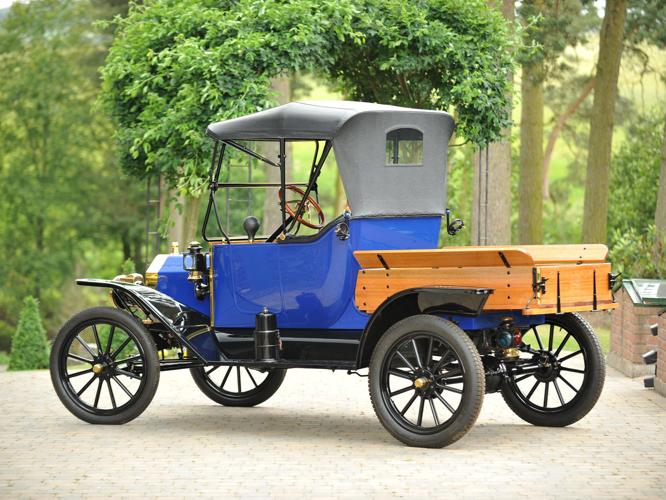 The Ford Model T was many times re-worked into a pickup truck thanks to homemade efforts and then via a box kit made available from Ford. Check the trivia portion of today’s column to find out how the Model T became known as the first ever “Pick up.” 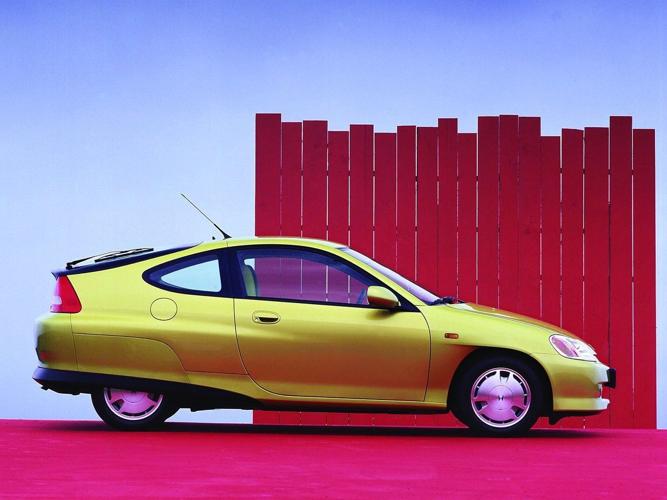 The Honda Insight was the first mass produced and available to consumers when it debuted in 1999.

Advertisement for the powerful 1970 Pontiac T-37 and GT-37, which were stripped down GTOs with optional GTO engines.

The Ford Model T was many times re-worked into a pickup truck thanks to homemade efforts and then via a box kit made available from Ford. Check the trivia portion of today’s column to find out how the Model T became known as the first ever “Pick up.”

The Honda Insight was the first mass produced and available to consumers when it debuted in 1999.

Q: Greg I like to read your nostalgia columns very much. How about your opinion on the electric car’s today and in the future? Thanks, Dave D., Rhode Island.

A: Dave, I’ve been receiving lots of letters on electric cars lately. The first mass produced and commercially available hybrid cars in the USA were the 1999 Honda Insight followed by the 1999 Toyota Prius seven months later. Prius was a four-door sedan style unlike the Insight’s two-door, two-passenger format. Both came with electric motors and an internal combustion engine to assist in keeping the batteries charged. These electric hybrids allowed recharging the batteries when driving, called the regenerative braking process. Granted, it was early hybrid electric technology, but still, in my opinion, a solid theory even these 22 years later.

Fast forward and we arrive at the more advanced plug-in hybrids, which allow more miles to travel on “all-electric” and the advantage of plugging in at home to recharge the larger battery packs. If the battery is low, and falls below enough power to get you home, there’s always the internal combustion engine working in tandem to eliminate any “stuck on the side of the road: situations.” Although the miles available to drive in all-electric mode is still limited, these plug-in hybrids can fulfill the needs of many consumers.

Fast forward again, and we arrive at today’s totally electric plug-in electric cars, led by the Tesla and produced by many manufacturers in recent years. I give Elon Musk of Tesla a big pat on the back for leading this booming industry that features cars that can go 300-miles or more between charges.

Although I fully support all-electric plug-in vehicles, there are major concerns. Because of this sometimes crazy push for instant “no fossil fuels” gratification by what I’ll call the “Green Energy Gang,” the current power grid capabilities (still powered mostly by coal and natural gas) and an administration that clearly supports this “no fossil fuel” endeavor is a prime example of putting the cart before the horse. When it comes to electric car infrastructure, and realizing that solar panel and windmill farms just won’t supply enough energy at this time, reassessing the mandates to force the sale of more electric cars might well be a worthy cause. In combination with “no fossil fuel” activist ideology and horrific world events, we need to step back and further assess our energy realities and current recharging station infrastructure.

For now, I’m still recommending hybrid electric cars and more R&D going in to this technology alongside the all-electric vehicle charging infrastructure. That little 4-cylinder engine backup will be the difference between getting home or spending hours at a re-charge station or worse, sitting on the side of a road. Thanks for your inquiry Dave.

Was there ever a Pontiac T-37 Tri-Power?

Here’s the really rare info: there were 10 1970 1/2 Pontiac G-37s built that came with a three two-barrel carb Tri-Power 350-V8 under the hood. I also remember High Performance Pontiac magazine did an article on these cars sometime in the late 1980’s.

My T-37 was a different as it had carpet and not the usual rubber floor mats. It didn’t have chrome, except for bumpers and door handles. The window trim was stainless steel and as you mentioned in your previous T-37 column, the G-37 was a stripped down GTO.

Back then Pontiac was trying to get the Tri-Power carburetor setup into racing, but it didn’t happen so they took spare GTO, Lemans and Tempest parts to build only 10 G-37s with the 350 Tri-Power engines. These cars out performed the ’70 GTO and Pontiac couldn’t have another car compete with the GTO, so Pontiac made sure the rest of the cars mostly came with 6-cylinder engines or the basic 350-V8 with the 2-barrel carb.

Mine had the Tri-Power removed when it somehow got out of California and sold in Altus, Oklahoma. Again this G-37 came from the Fremont Plant and the dealer in Oklahoma remembered my car. The 10 Pontiac G-37 Tri-Power cars were 2-door post designs and painted around doors and quarter window instead of using chrome strips.

I still have the original bill of sale and Tempest owner’s manual. I sold mine in 1999 and then in 2009 it was restored with the exception of adding a chrome strip below the doors. Also the colors were slightly lighter than the factory colors.

I saw your article on the T-37 and liked it and am now looking at purchasing a ‘71 GT-37 with the 400 engine. Thank you for your article as I just found it and wanted to give you the info I had on the 350 Tri-Power. Thank you, Michael Trail, sent from my iPhone.

However, I’m not saying these 10 cars didn’t exist. Back in the 1960s and early 1970s, Pontiac was known for performance and was the very first to introduce the midsized muscle car with its 1964 GTO, which featured a 389-V8 with a Tri-Power option. Pontiac also played around with certain cars that were never publicized, and your T-37 Tri-Power is surely one of them. However, I just can’t find any info on these 350 Tri-Power cars. I’d love to see that original bill of sale and perhaps a copy of the magazine article. If you can send a copy of either one I’ll follow up.

Q: Greg you may know this bit of trivia, but in case your readers don’t here’s how the truck would come to be called a pick-up truck.

Because the Ford Model T was affordable, a lot of farmers bought them. The farmers then realized that if they cut the back of the car off and bolted in some boards they could haul the many items a farmer produced and farm equipment needed. They would not need to hook up the horses to a wagon as they did prior.

Next, the marketing folks from The Ford Motor Company realized this could be a whole new market by building a truck that was ready for farmers use. However, Henry Ford wanted nothing to do with adding to or changing his beloved Model T. Still, the marketing guys were finally able to convince Henry to let them build a truck “Box” in kit form that could be added to the Model T. This eliminated the farmers from making a homemade version out of wood.

The challenge was to get the box kit to the farmer as most car dealers were located in a city or large town and not in the rural farming areas. Shipping the Box Kit via railroad was the answer as the rails would go through every small town in America. Once the Box Kit arrived at the rail station, the station manager would “ring up” the farmer and tell him he had a “Pick Up” and to come and get it.

As their Model Ts were still a car, once the farmers added the box kit they used the term “Pick Up” to explain that their Model T had the functional addition. Now you know the story — behind the story. Keep those columns coming, Randy Lawton, Berwick, Pa.,

A: Thanks Randy for the trivia. It’s ironic that even though Henry Ford didn’t want to build a pickup, to this day the Ford F-Series is one of the best selling pickups in the world. I remember the many “Farm Truck” pickups advertised in the newspapers back in the 50s and 60s that were stripped down, “work only” trucks, unlike today’s luxury pickups that offer everything when it comes to modern technological wonders. Thanks again for your email (Note: Randy Lawton is a car show and car cruise promoter and owner/driver of a winning late model stock car now driven by his son).

Greg Zyla is a syndicated auto columnist who welcomes reader questions on car nostalgia, collector cars and motorsports at greg@gregzyla.com.

After COVID hit more than two years ago, the options for remote work exploded. After all, it appeared a necessity as we navigated lockdowns to try and prevent the virus’ spread. Now that society is moving forward, the availability of remote work continues to be a reality in some industries. That’s why we want to know what you think about working remotely. Do you believe people are less productive or more productive if given the chance to work from home, as long as it is applicable to their specific job?