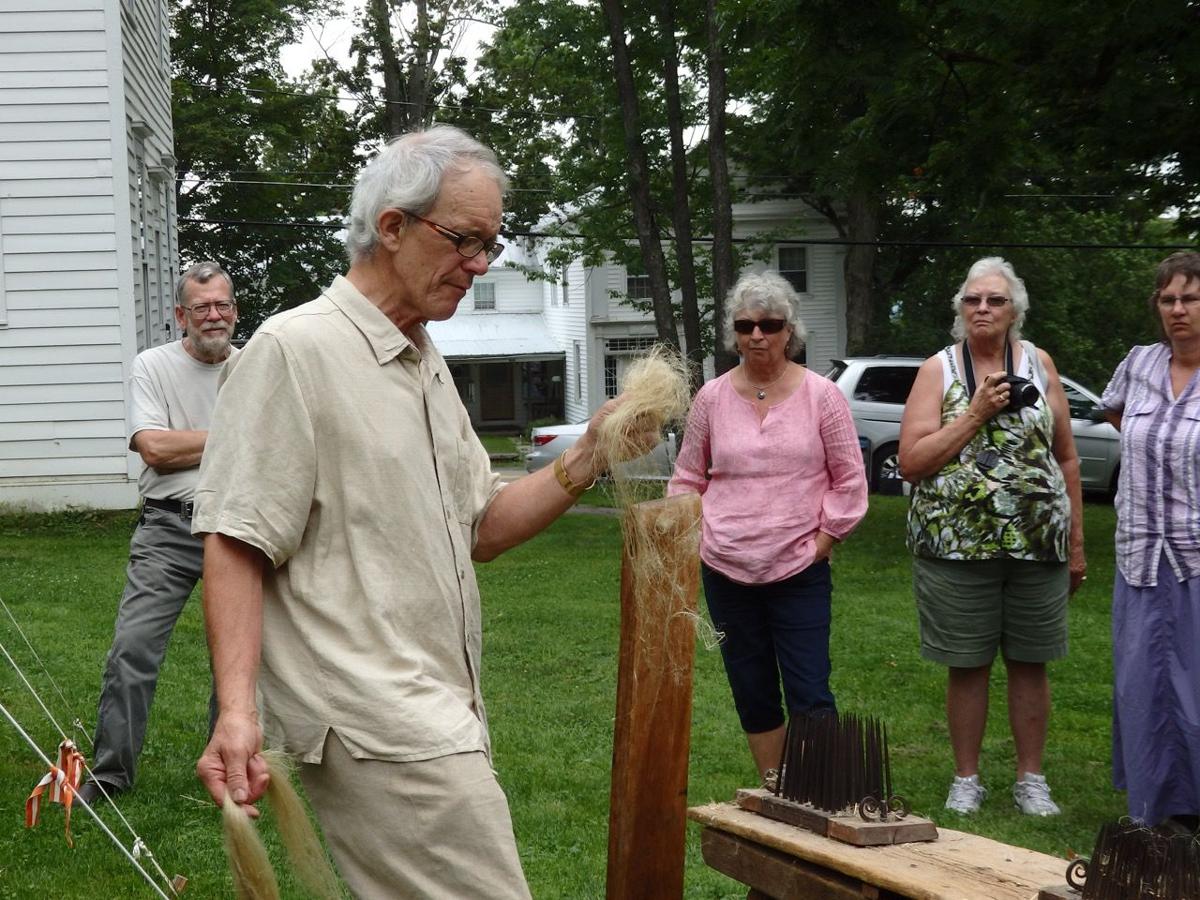 Submitted Photo/Ruth TonachelJohannes holding a handful of “tow” in his left hand and some fine long flax fiber in his right. 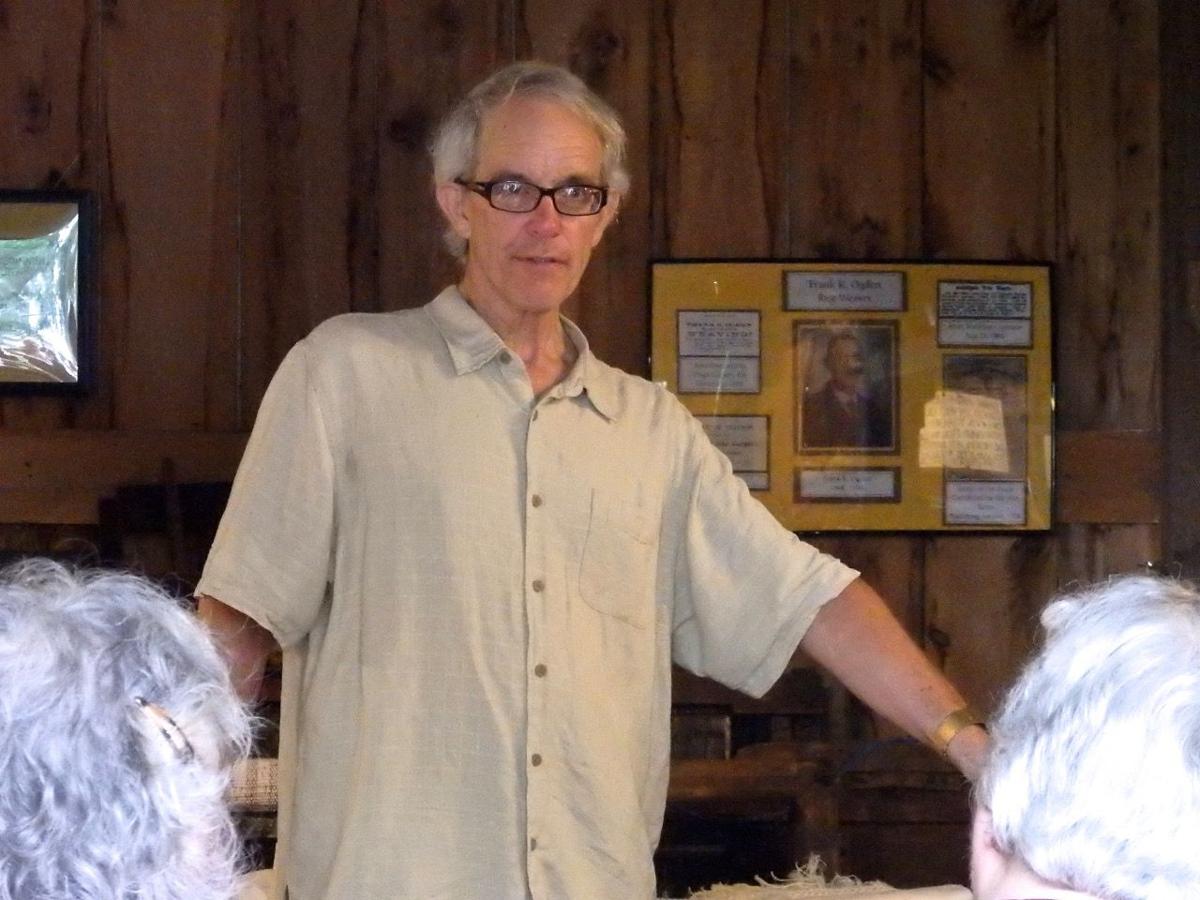 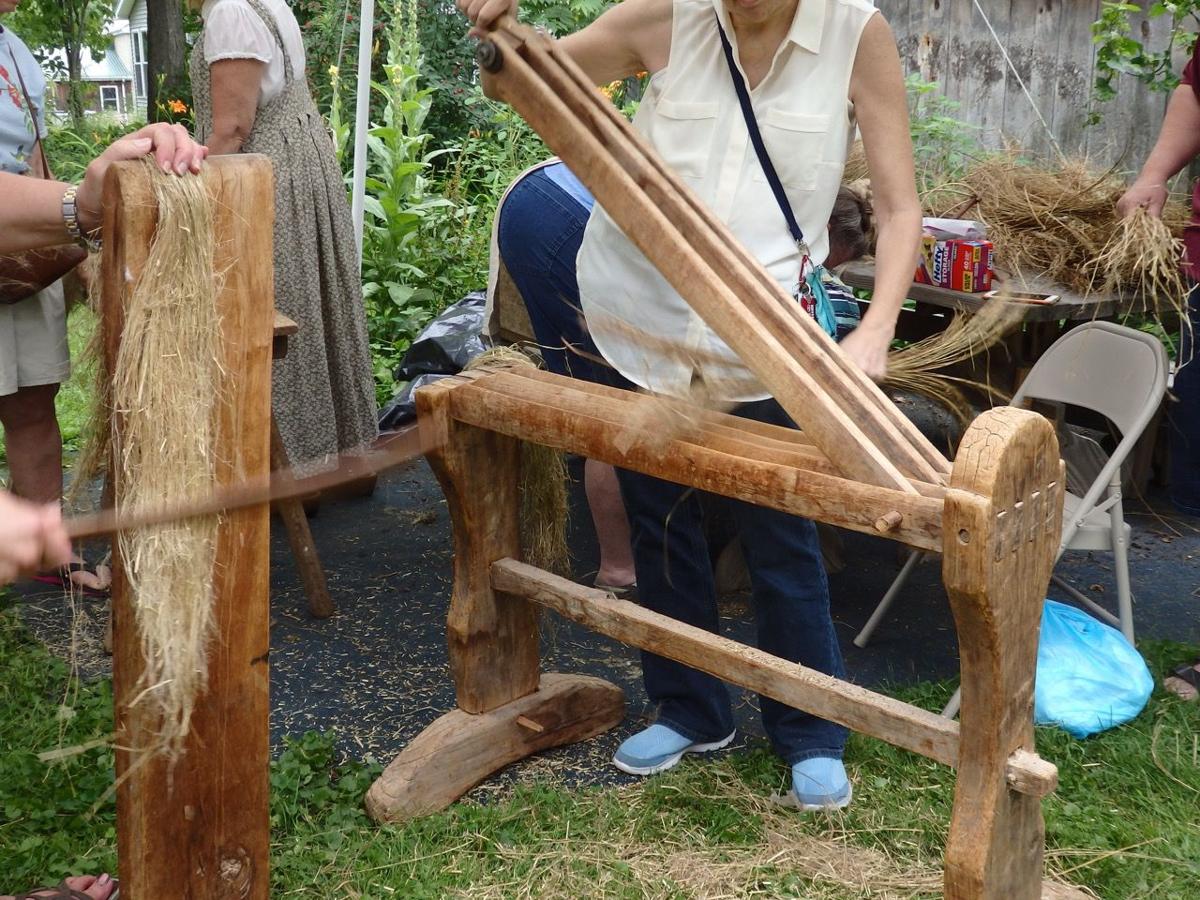 Submitted Photo/Ruth TonachelParticipants using the flax brake (right) to crush plants and the skutching blade (left) to detach the outside chaff from the fiber. 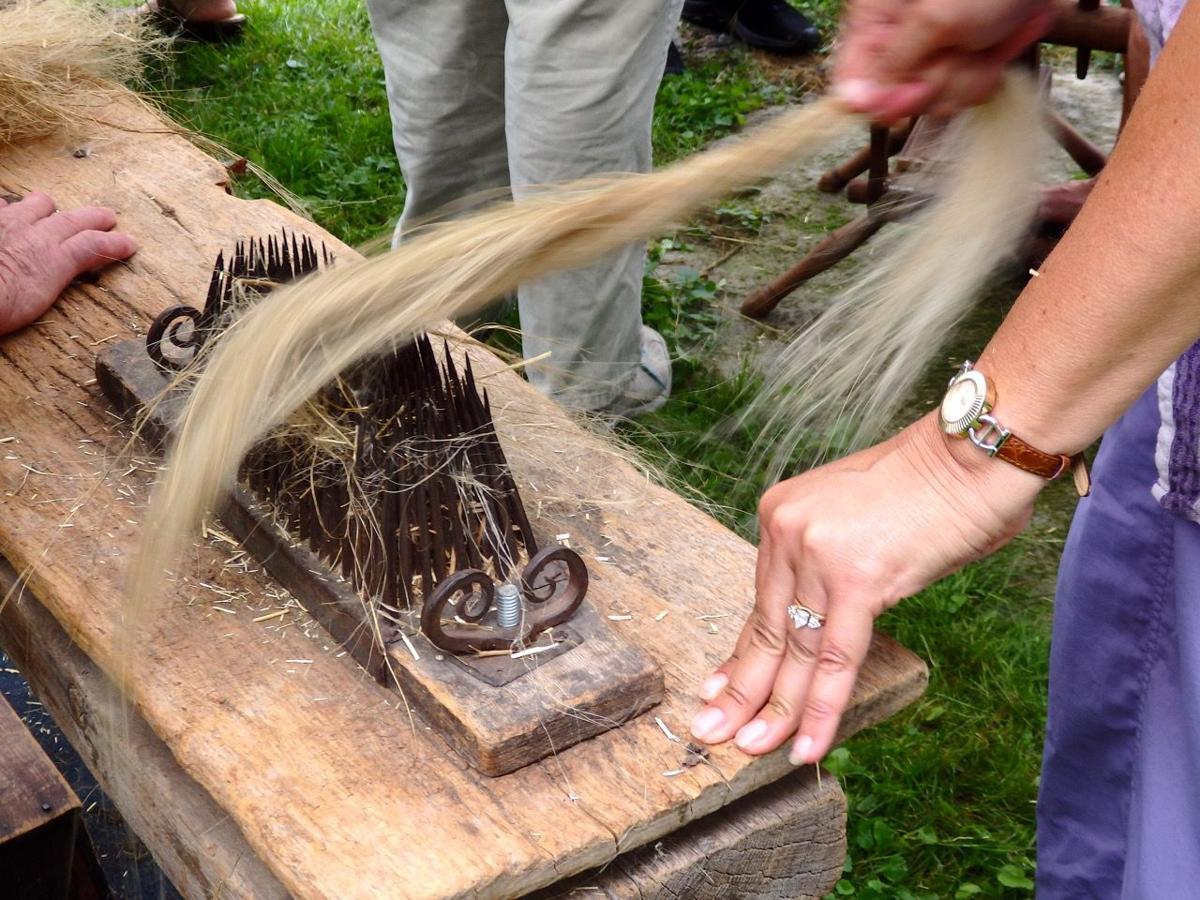 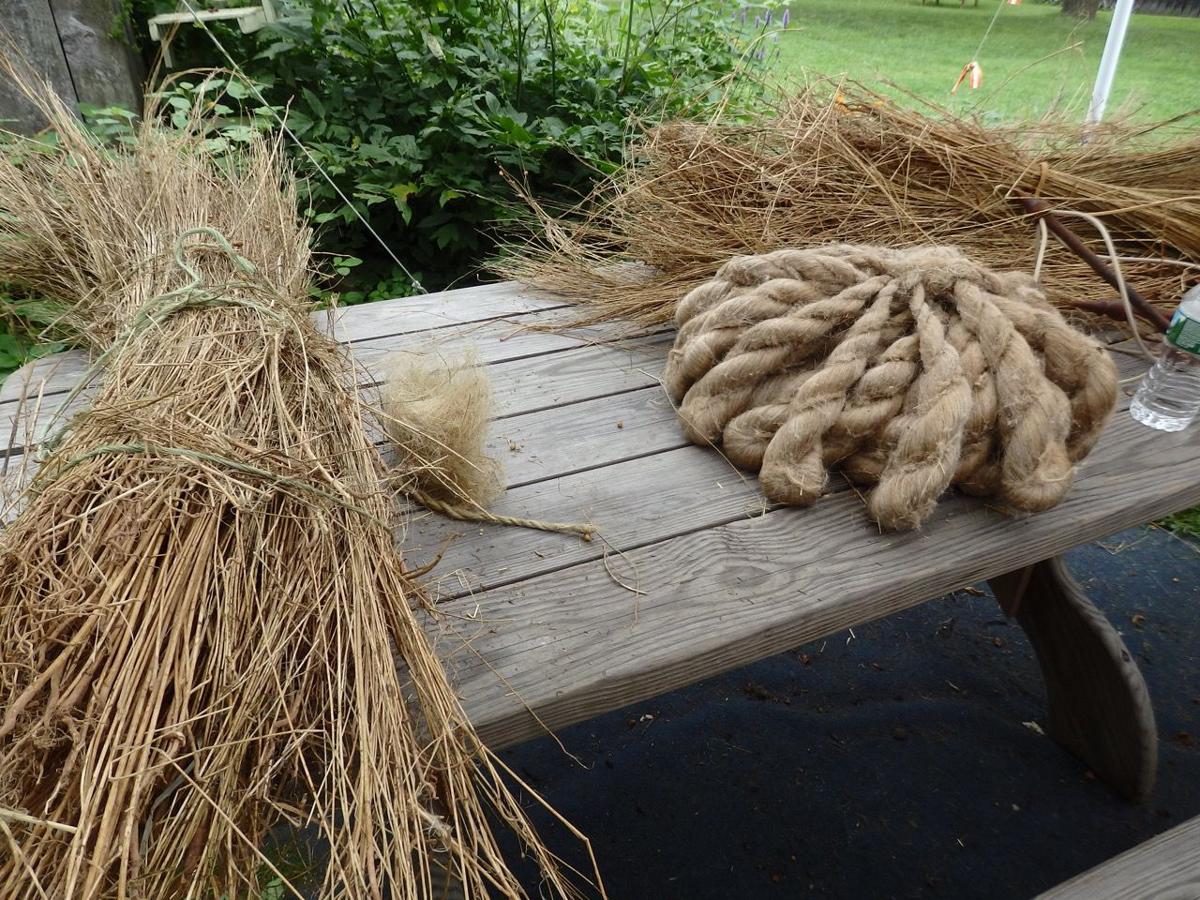 Submitted Photo/Ruth TonachelOn the left, flax plants after retting and ready for processing. On the right is a bundle of “stricks” of twisted flax fiber ready for spinning.

Submitted Photo/Ruth TonachelJohannes holding a handful of “tow” in his left hand and some fine long flax fiber in his right.

Submitted Photo/Ruth TonachelParticipants using the flax brake (right) to crush plants and the skutching blade (left) to detach the outside chaff from the fiber.

Submitted Photo/Ruth TonachelOn the left, flax plants after retting and ready for processing. On the right is a bundle of “stricks” of twisted flax fiber ready for spinning.

Renowned flax and linen expert Johannes Zinzendorf has been a student of flax growing and processing, and linen making, for over 25 years. He is co-author of “The Big Book of Flax,” a compilation of many lessons learned with Zephraim de Colebi (formerly Christian Zinzendorf) as they pursued the art of making linen clothing from seed to shirt. The two authors have been giving presentations and doing demonstrations for many years as they have learned more and more. Johannes is a warm and witty speaker overflowing with knowledge.

On a perfect late July Saturday, the Home Textile Tool Museum (HTTM) in Orwell hosted Johannes with small part of his collection of tools and artifacts relating to flax and linen. A lively, engaged audience of 26 participants learned about the history and processing of the flax plant — the raw material used in making linen. In addition, each participant was invited to process a handful of dried flax plants using tools from the 1800s. Some had brought spinning wheels to turn the fiber into thread.

Flax is the oldest known plant fiber used by humans. Linen is probably the oldest textile in the world. The history of flax growing spans the globe. The earliest known flax fiber was found in a cave in what is now the Republic of Georgia and is believed to be about 30,000 years old. Fishing nets and twine were among the first uses of flax fiber.

The oldest known linen fabric was found in southeastern Turkey and dates to about 8000 B.C. Areas of known ancient production include Israel, southwestern Russian and Egypt. The Vikings and the Romans both developed the art of processing flax and used it in many ways. The Shroud of Turin has engendered debate for centuries regarding its age and the images on it — but there is no question that it is a piece of woven linen made from flax.

By the late Middle Ages and the Renaissance, the basic flax processing tools that are still used today had been developed. Those tools were brought to the Americas by various waves of conquistadors and immigrants starting in the 14000s and 1500s. By the time of the American Revolution, Pennsylvania was the biggest linen producer — with the entire process being done by hand. Clothing, sheets, bags, ship sails, rope and much more were made from flax. Wool from sheep was the other common fiber and sometimes the two were mixed in a fabric known as “linsey-woolsey.”

In the late 1700s, technology designed for cotton (which has a shorter “staple” or fiber length) made it possible to more easily process cotton fiber for cloth production. Some flax fiber was chopped to fit the cotton processing technology but overall, cotton mechanization led to the decline of flax and linen production. There were some holdout areas in the USA — Stevens Linen Mill in Massachusetts and areas of Oregon continued to produce linen until after World War II but declined after that. Parts of Europe continue to grow flax but processing is mostly done in China now.

There has been a recent revival of interest in flax and linen in tandem with the local food movement and interest in the concept of “food sheds” and “fiber sheds.” [Tap Root Farms in Nova Scotia makes and sells flax milling equipment for about $100,000 if you are interested in promoting a bioregional fabric ethic.] This movement seeks to identify the sources of all that we consume and bring it back to the most local level possible. In the case of flax and linen, as the Zinzendorfs found out, this can mean rediscovering skills and knowledge that had nearly disappeared.

An overview of flax processing

Flax is a fairly easy plant to grow. It has delicate greenery and lovely blue flowers on fibrous stems. According to Johannes, flax is self-pollinating and is not bothered by any type of insect or animal pests. “Nothing eats flax,” he stated. Marilyn is the variety preferred by growers who aim to use the fiber for textile production.

The plant is pulled up — roots and all — after about two months, when the bottom third of the plant turns yellow. It is tied in bundles which are shocked to dry. Ninety percent of the dry flax plant is chaff (material that may be recycled into compost or mulch) and only 10 percent is usable fiber. All of the following steps are the process required to get from a whole dry plant to the 10 percent fiber used for spinning.

After the initial upright drying, the seeds are separated via large combs called rippling combs or by being beaten with a flail. Flax seed can be stored to plant and is also pressed to make linseed oil.

The next step — and the most critical one — is called “retting.” This is done in one of two ways and is essentially a method of allowing nature to rot the outside layer of the plant stems. In “dew retting” the plants are spread in a thin layer on the ground. The plants lie there for three to five weeks until they are silvery at both ends and make a cracking noise when broken. Johannes admitted that it took he and Christian three years to get this step right. Too much time and the plants just rot, not enough and the stems won’t break.

Alternatively, the flax can be soaked for several days in a pond or other water — a process known as “water retting” — and then dried again on the ground. Negative aspects to this method are a bad smell and possible pollution of waterways.

After retting, a “brake” is used to crush the outer shell of the plant. The brake has two sets of horizontal wooden “blades” that are slammed down on the plant to loosen the outside layer. The brake used by Zinzendorf is French Canadian.

Skutching follows. This is a process of drawing the fibers across a knife edge (again generally made of wood) to clear away more of the outer shell and debris. The edge used by Johannes at the HTTM was actually the blade of a wood machete someone brought as a souvenir from Haiti. This step can also be done with a skutching wheel — a rare implement designed in Scotland in the 18th century.

Combing is the final step in separating the long smooth fibers used to make linen. This is done with two to four graded spike “combs” (also known as hackles or hetchels). This step separates the final long fiber from the “tow” which is the shorter fiber left in the comb. Tow was used in rope making and also spun and woven into rougher linens used for wagon covers, grain bags and heavy aprons. A comb with spikes very close together to get the finest possible fibers was designed for lace makers.

After combing, the flax fibers are wound on a distaff prior to spinning. If interested, Johannes suggested YouTube videos addressing methods of getting the fiber on the distaff.

There are various spinning tools including drop and hand spindles and flax wheels which were developed in Germany in the 14th century. The actual spinning that twists the fiber into thread takes places between the two hands of the person operating the wheel so the wheel really just stretches it out and winds it onto a spindle of some sort.

The final step in processing would be weaving. Johannes demonstrated a tape loom which he said would be used in homes in Germany years ago to weave small strips. In Europe, weaving was done by itinerant professional (male) weavers who traveled from farm to farm. It took at least seven years to become a weaver. In colonial New England, looms were more common in homes and women learned to weave although there were still traveling weavers in America up until the industrialization of fabric production.

Linen is difficult to dye so the color of the fabric is generally a natural tan or golden color. Occasionally there will be stripes of blue (indigo) or browns and reds from various plants. The ease of dying cotton — and the industrial technology to process it into fabric — contributed heavily to the decline in flax and linen use.

Nevertheless, HTTM is dedicated to celebrating the many aspects of at-home cloth production so Johannes Zinzendorf and the many tools and items he brought for display was an amazing opportunity for learning. Those who attended were all very happy to have the chance to hear someone so knowledgeable, enthusiastic and honest. Further information can be found at www.Flaxforsale.com.

About the Home Textile Tool Museum

Upcoming programs at the HTTM include the Annual Wool Waulking on Aug. 12; a lecture on rag rugs by Pat Hilts at 1 p.m. on Aug. 19 and a lecture by Dick Warner on the threshing barn at 1 p.m. on Aug. 26. Pat Hilts will be holding an in-depth timber frame loom workshop from Aug. 23-25. Advance registration is required for the three-day program and there is an additional cost. The museum welcomes everyone and has ramps for all buildings.