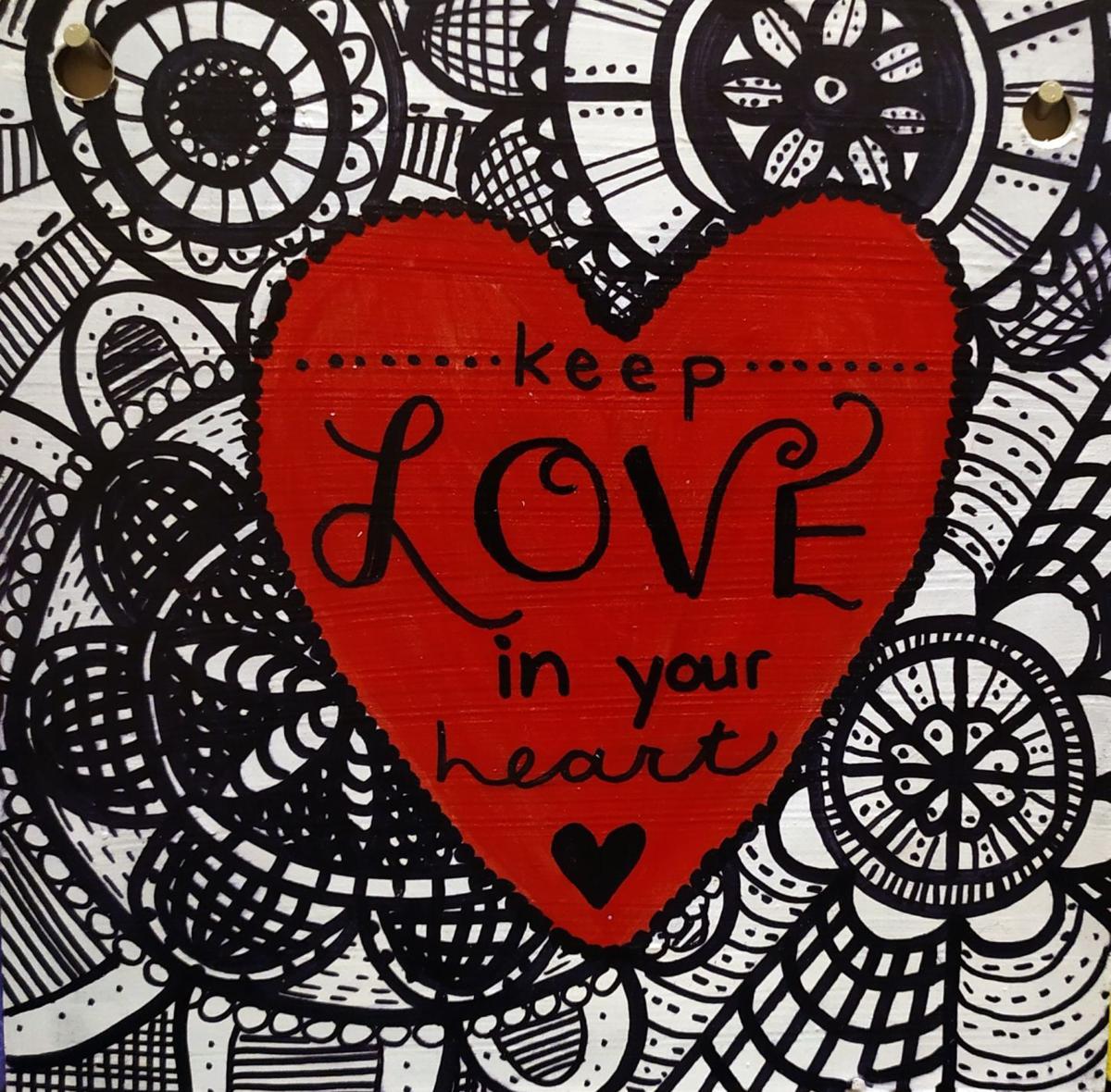 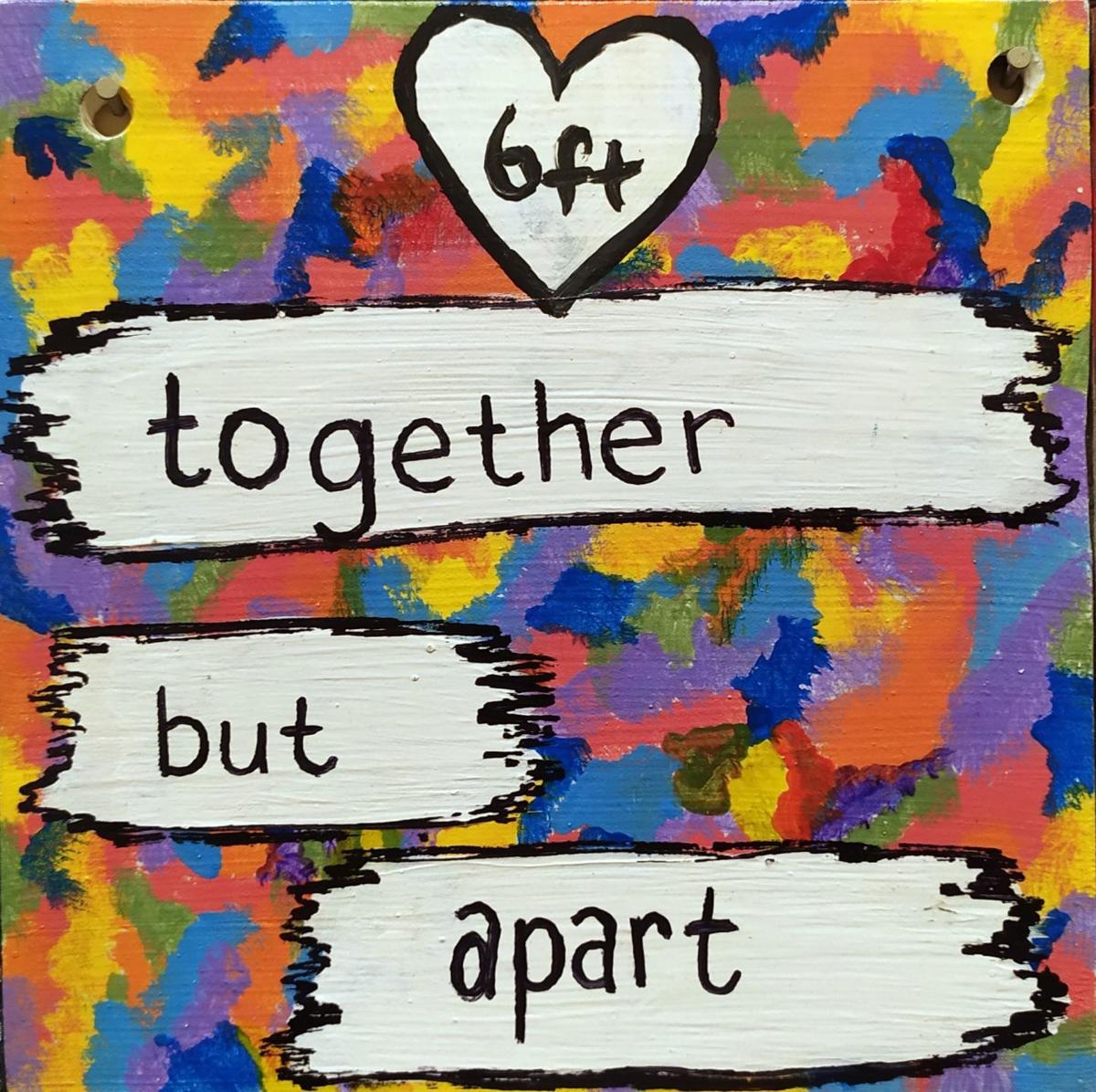 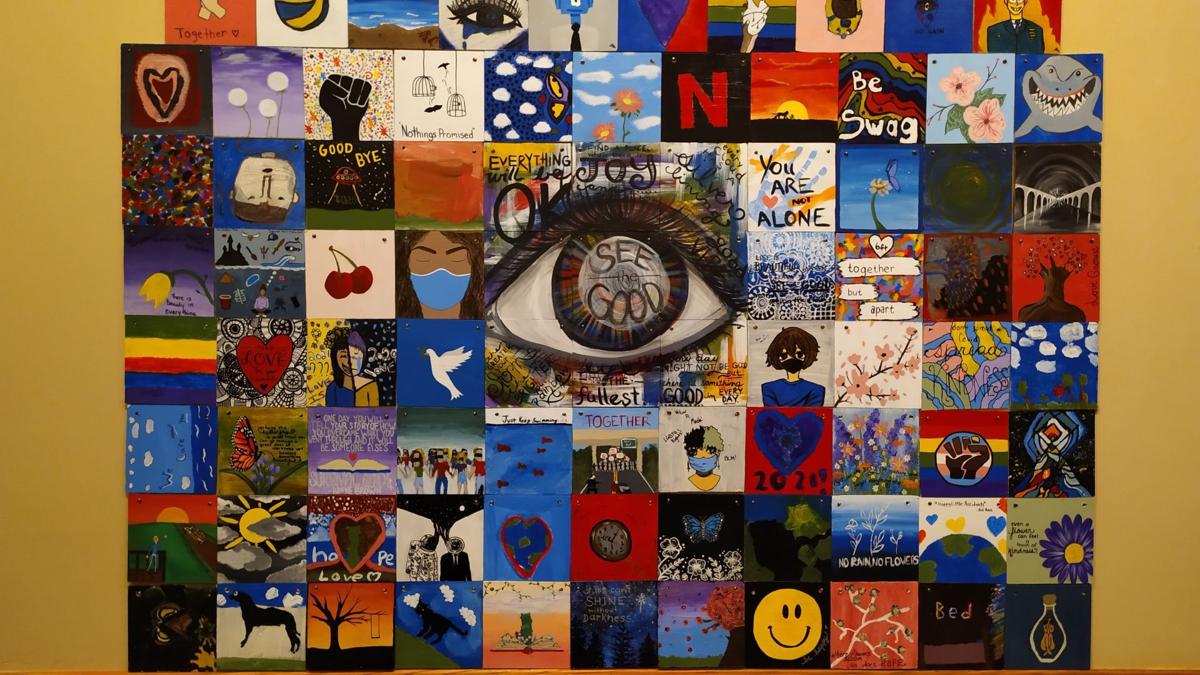 Wyalusing students produced multiple views of living through the pandemic with the chosen theme of “See the Good” as depicted of six-by-six-inch tiles forming this “Voices of Our Youth” mural, which will be on public display outside the Keystone Theatre this spring and summer. Students at other local schools are invited to join in this project and raise their voices through their art.

Wyalusing students produced multiple views of living through the pandemic with the chosen theme of “See the Good” as depicted of six-by-six-inch tiles forming this “Voices of Our Youth” mural, which will be on public display outside the Keystone Theatre this spring and summer. Students at other local schools are invited to join in this project and raise their voices through their art.

How did the pandemic and unwanted graffiti on downtown buildings converge into a project that inspired high school students to create art and, at the same time, express their feelings about the historically tough times in which we are living? They planted the seed for a project called “Voices of Our Youth” and brought to life by Shauna Case’s art students in Wyalusing who joined together in proclaiming that the key to surviving, even thriving, is to “See the Good.”

“The kids were still a little shy but once they got into it, they really blossomed,” said Case, who categorically recommends the project, sponsored and funded by the Bradford County Regional Arts Council (BCRAC), to other schools in the region.

Graffiti has become an art form in itself, but the messages being scrawled on various sections of the exteriors of the Keystone Theatre in Towanda and Sayre Theatre were far from artistic in most cases. Defacing private and public property is a crime, but it was clear that it was being done by young people with time on their hands and perhaps as an expression of frustration and anger.

Elaine Poost, BCRAC’s Executive Director, was struck by this burst of vandalism last fall and it raised the question, “What’s going on here?”

“I realized at that time that the stress of the pandemic was felt by everyone and that maybe the youth needed an outlet and needed to be heard in all of the chaotic din of what was happening everywhere,” recalled Poost.

It brought to mind a project she had seen at the Ithaca Children’s Garden where youngsters conceptualized their feelings about what they were feeling via images on slips of paper. Why not take the idea to art teachers in local school districts and have the young artists paint images on six-by-six-inch tiles that would ultimately be joined together into a larger mosaic containing rows of divergent colors and images? Each project would require the young participants to come up with a theme by “brainstorming” by considering the following prompts: their perceptions of these unusual times, influencing lives through publicly displayed art, utilizing art to communicate both viscerally and intellectually, and, finally, what the message should be.

Only Wyalusing’s Shauna Case has responded so far, and the result even surprised her. The public will be able to view the realization of this congregation of talents on a chain-link fence outside the theater in Towanda, and all schools are invited to create their own “mosaics” as spring approaches.

“A lot of the conversations we had when we were choosing our central theme of ‘See the Good’ were about the positives that came out of a difficult situation,” said Case. “Coming up with ideas for the tiles and seeing what peers were doing really helped open the students up to talking about their thoughts. Seeing that others had similar thoughts and feelings helped many kids open up. It was a really great exercise for them.”

The Wyalusing project has shown that young people see-sawing between minimal human contact and a virtual world need positive, mentally healthful discussion to stimulate artistic expression. With each tile, its creator briefly explains the message of her or his art in words, and it is reassuring to see the divergent ways they accent the positive and a brighter future.

A sandy beach facing receding dark clouds and lightning and the approach of a bright sun and golden sky signifies, in the words of Haley McGroarty, the artist, “the calm after the storm” and that “we will hopefully find peace again amongst us.” Olivia Haley’s tile shows rows of masked people holding hands, which symbolizes “that even though we have to go through many hardships during this pandemic, we can all work together and do our part so we can get better.”

It is proof that an age group hit particularly hard by the pandemic recognizes that art may be used to create a compelling message of hope during stressful times.

Art teachers who would like to know more about the Voice of Our Youth Project are invited to contact Renae Chamberlain, Director of Northern Tier Partner for the Arts, at (570) 266-2787 or NTPAIE@bcrac.org.

The Internal Revenue Service announced it will extend the federal income tax filing deadline to May 17, 2021 and the Pa. Department of Revenue has followed suit with the same deadline. Have you filed your 2020 taxes yet?