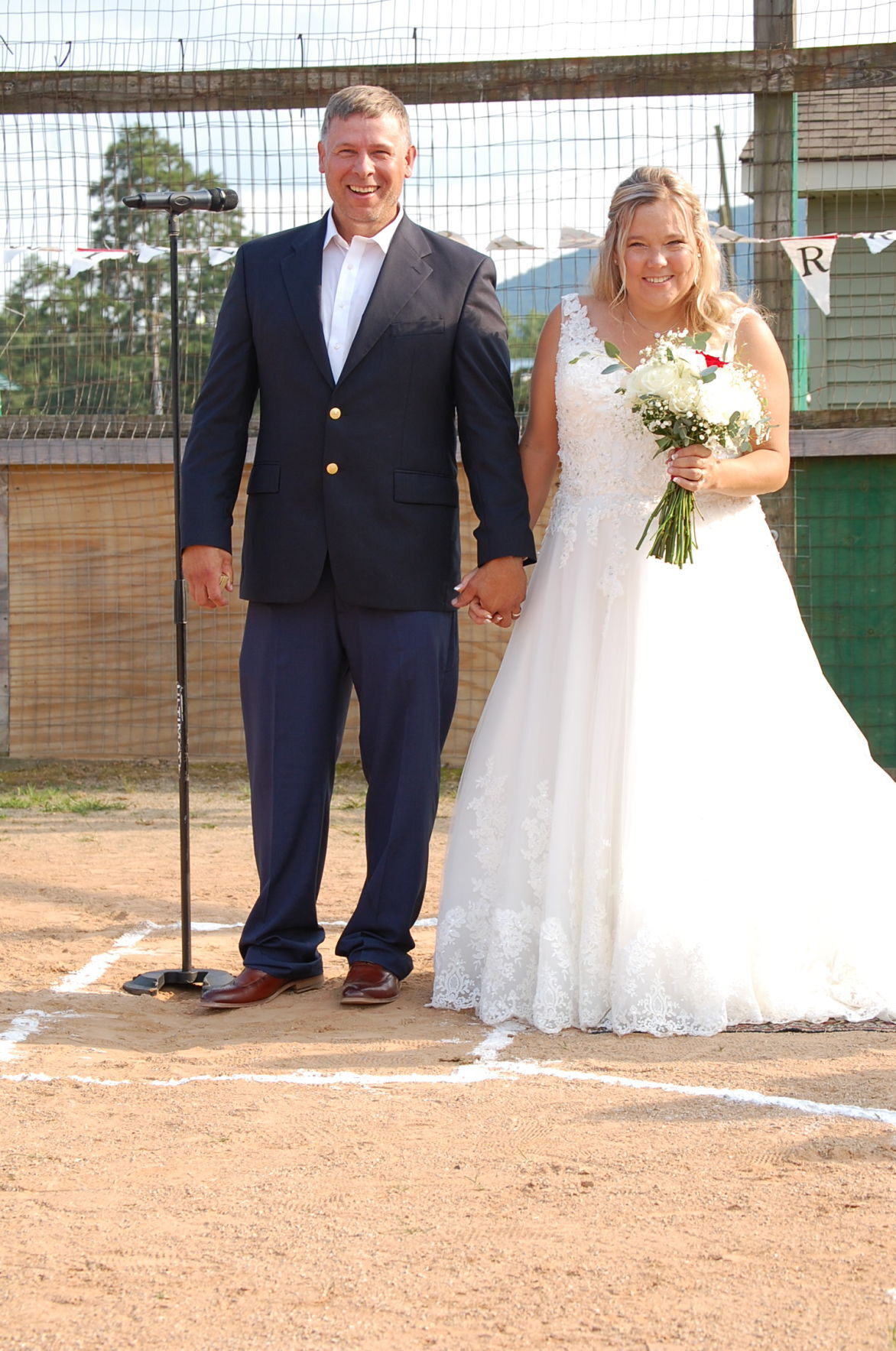 Mr. and Mrs. Vargason are presented. 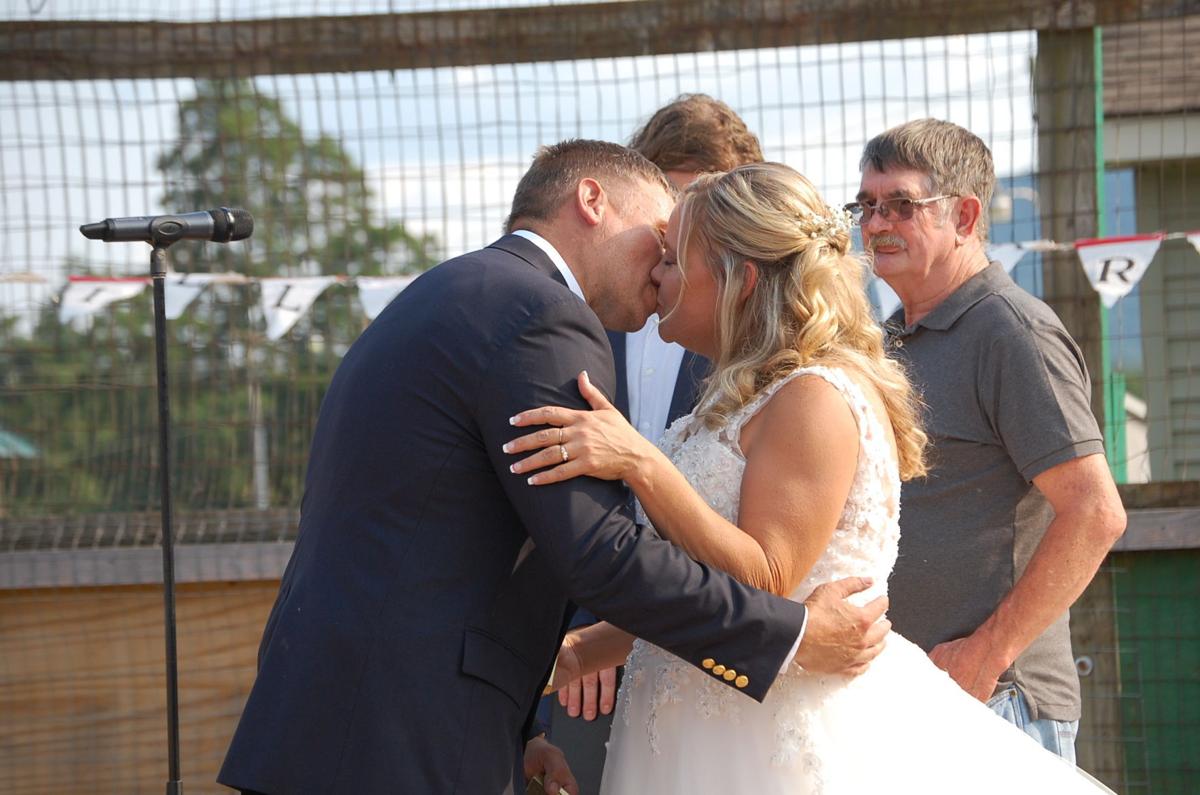 Rick and Kelly Vargason share their first kiss as husband and wife. 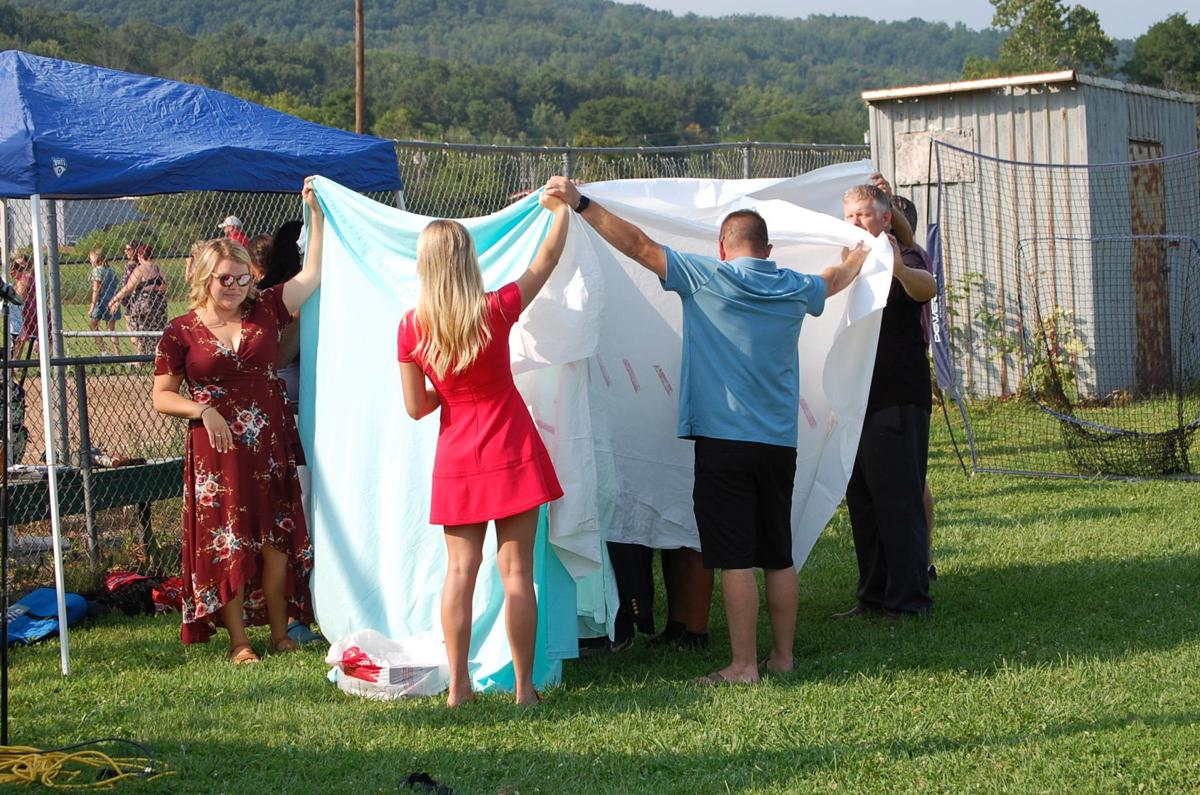 Rick Vergason was guided off the field to a makeshift changing room to get dressed for the wedding. 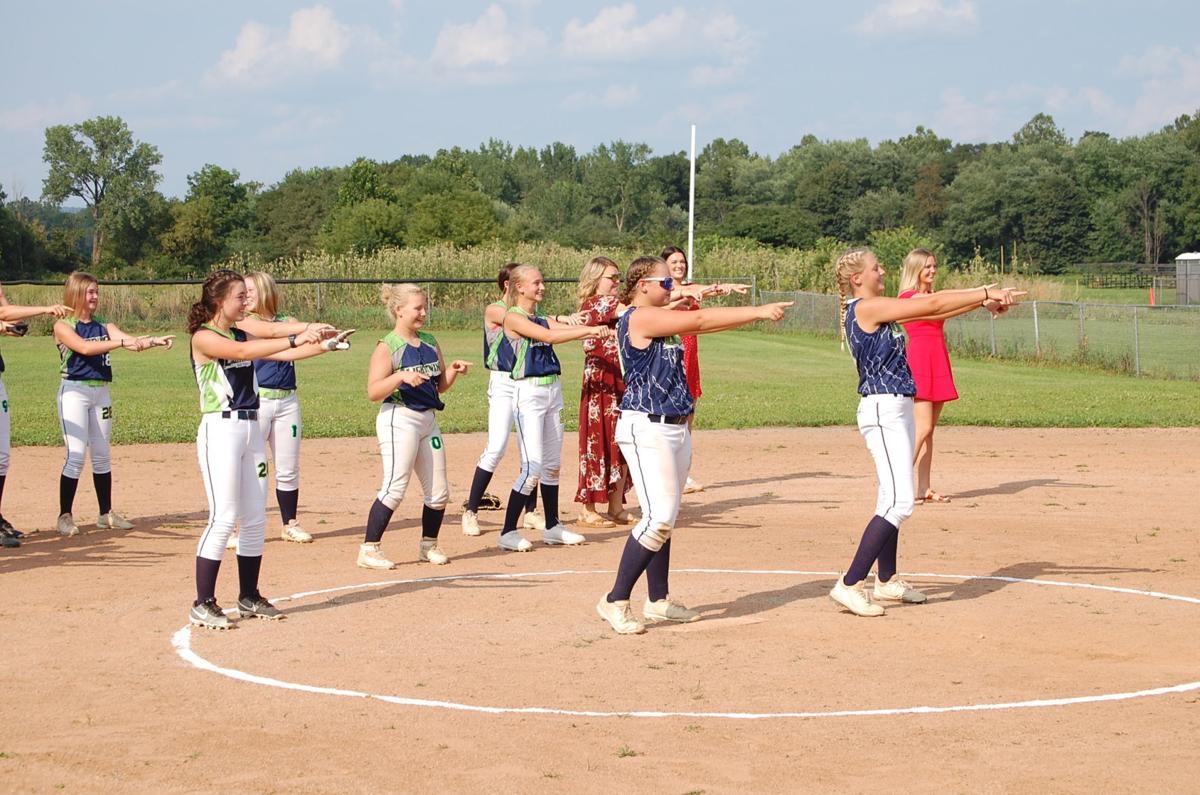 The Lady Lightning surprised their coach with a flash mob dance to Bruno Mars’ “Marry You.”

Mr. and Mrs. Vargason are presented.

Rick and Kelly Vargason share their first kiss as husband and wife.

Rick Vergason was guided off the field to a makeshift changing room to get dressed for the wedding.

The Lady Lightning surprised their coach with a flash mob dance to Bruno Mars’ “Marry You.”

MONROE BOROUGH – A flash mob wedding broke out at Mountaineer Park on Sunday, with Kelly McNally surprising her longtime fiancé Rick Vargason with an unexpected ceremony and reception in the guise of a Lady Lightning softball scrimmage.

Rick and Kelly, both natives of the area, first started dating back in 2005. They got engaged only a couple years after, but put their wedding plans on hold when Kelly experienced kidney failure.

“I’m on dialysis and I didn’t want to do a honeymoon and stuff and have to cart my machine,” Kelly said. “It’s a lot, it’s a hassle, there’s so much that goes with it.”

She noted that they are hopeful that she can receive a kidney transplant soon. But rather than keep putting off the wedding until a hopeful future date that is out of control, they decided to get married on their own terms.

“It just ended up being the right place at the right time,” said Kelly, “and we had all the right people to help and it was amazing.”

They just had to decide when and how the ceremony would take place.

“I told her, just pick the spot, the time, whatever, I’ll be there,” Rick said.

Rick and Kelly share a blended family, with Rick bringing three children from a prior relationship, Kelly bringing one, and two children that they’ve had together. The couple formed the Lady Lightning softball team in 2011 out of their love for the sport and to provide an avenue for their daughters and other girls in the community to improve in their play.

Kelly said the diamond was the perfect place to be wed in front of all their loved ones and incorporate everyone into the celebration.

“It’s kind of like our go-to place,” said Kelly. “We’re always at the ball field ... and the ball teams have become our family cause we’re with them all the time.”

Kelly’s firstborn and Rick’s youngest from his first marriage both played for the Lady Lightning back in 2011, and Rick noted how nice it was for those girls to come back and meet the players coming up through the team.

“At the time they were both 12 and now they’re 21, so it was kind of cool for them to come down and see all the younger girls and older girls,” Rick said. “They kind of combined and reminisced.”

Everything caught Rick completely by surprise, and he was the last person to know what was going on.

He explained that the team holds scrimmages throughout the season, and he received a text from one of the other coaches suggesting one more scrimmage at the end of the season to celebrate. Rick thought nothing of it and arrived at the ball field ready to warm up the team. He said he noticed the commotion in the pavilion, where preparations were being made for the reception, but he chalked it up to be someone else’s event.

“I had noticed there were quite a few over by the pavilion,” Rick said, “but they always have different events down here so I didn’t really think twice about it.”

That’s when “Marry You” by Bruno Mars started playing through the speakers and all the players took to the infield for a flash mob dance. Rick said that at that point he picked up on what was really happening.

“When I heard the tune, that’s kinda when I knew what she was up to,” he said.

Kelly said the moment that made the highlight of her day was seeing Rick’s face as he connected all the dots.

“I wanted to be there when he got that ‘holy cow’ look,” said Kelly. “I was watching him and he said, ‘did you do this,’ and I kinda shrugged my shoulders. And he looked at me and smiled and I thought ‘oh my gosh, yep, he gets it now.’”

Rick was ushered off to quickly change into his suit, and Kelly left to put on her dress. When Rick arrived back at home plate he was joined by his nephew, Mitch, who officiated the marriage. Kelly was then escorted down the third-base line by her uncle, Dale.

“Once we got on home plate and I looked at him, I was just so happy that we were finally doing it,” Kelly said. “We always wanted to, it’s just life gets in the way ... he’s definitely my soulmate and I’m so glad that we were able to do it finally.”