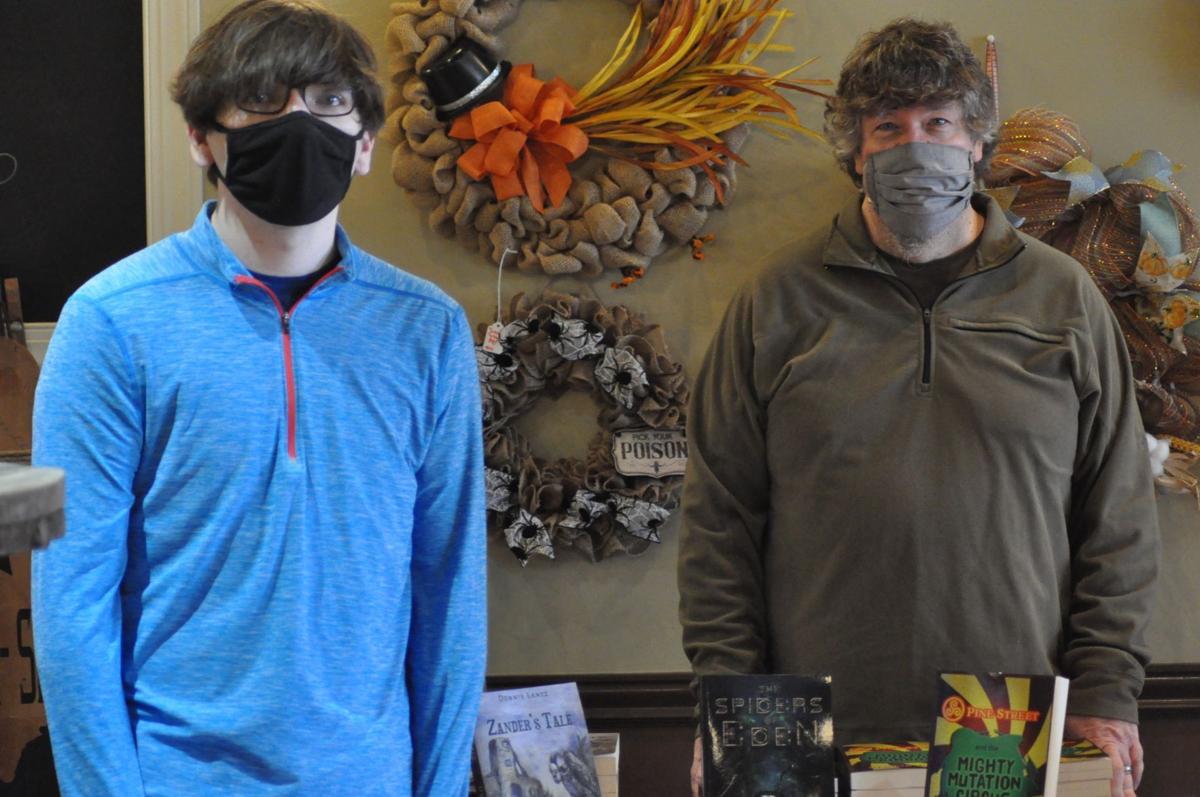 From left, Basil E. Bacorn and Dennis Lantz prepped for the book signing they had at SHEA Creations in Athens in October. BELOW: Lantz’s newly published novels. , available now. From left: “Zander’s 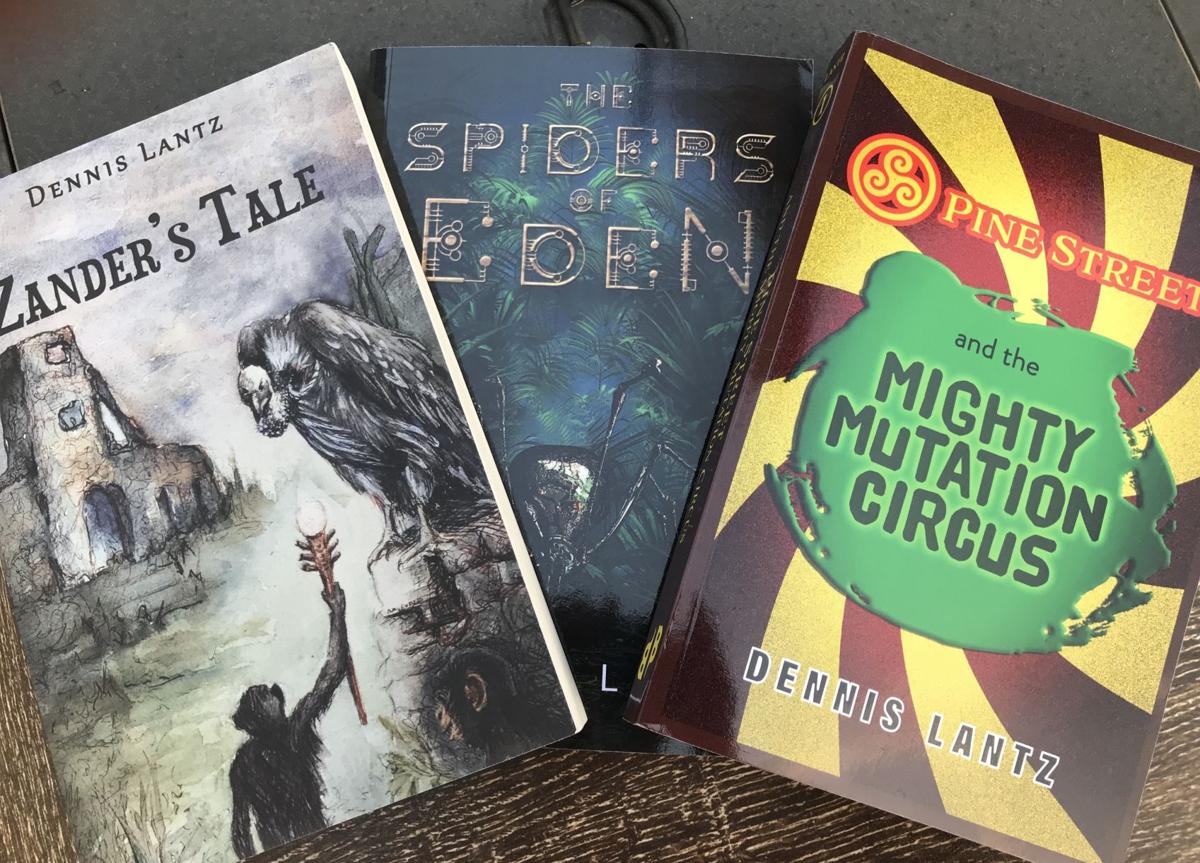 From left, Basil E. Bacorn and Dennis Lantz prepped for the book signing they had at SHEA Creations in Athens in October. BELOW: Lantz’s newly published novels. , available now. From left: “Zander’s

“My books don’t follow a particular genre,” said Dennis Lantz, newly-published author of Warren Center. His novels: “Zander’s Tale,” “The Spiders of Eden” and “Pine Street and The Mighty Mutation Circus” are all available on Amazon books and Publisher Basil E. Bacorn’s webpage.

Lantz told The Review that “Zander’s Tale” is an anthropomorphic story about a young primate who finds, what he thinks, is a magic scepter. It’s a journey through a jungle with themes of animals and transformation. “The Spiders of Eden” and “Pine Street” take a more traditional approach to the science fiction genre with the theme of an outcast in a dystopian society.

The books are best suited for young adults who enjoy reading fantasy, sci-fi and action novels. “I would call them adult stories, but “Zander’s Tale” and “Pine Street” have young characters,” Lantz said.

He thanked his friend, artist Amy May Evans, of Rome, for her work on the cover artwork and illustrations for “Zander’s Tale.”

Lantz noted that he began writing the story in late 2016 as a writing exercise to “work on the craft.” He finished the book by spring, and figured he’d keep on writing. The cover artwork for “Pine Street” was created by Bacorn. Gabriel de Leon, an intern at his publishing company, designed the cover artwork for “The Spiders of Eden.”

Bacorn told The Review that one has to consider what a story “boils down to” in the process of creating cover artwork: the themes, motifs, and characters.

“With “Pine Street,” I chose the idea of a mutation circus. On the cover, its got the alternating red and yellow stripes of the old big top circus posters. I added the green in the middle to add a science-fiction feel to it,” Bacorn said.

“Pine Street” started out as a 144,000-word novel in 2017 before Lantz decided to break it up into a three-part series. “A young runaway is swept up in the world of genetically modified animals and traveling shows,” Lantz said.

“‘The Spiders of Eden” tells the story of Jonah Pepper, a societal outcast who gets a job at a unique hunting resort,” Lantz said. “When he witnesses a murder, he suddenly becomes the prime suspect. He is hunted. In order to live, he has to rely on lessons he learned as a child.”

The “Pine Street” trilogy takes place in the same universe as “The Spiders of Eden,” but a few years have passed in between and they have separate storylines.

The books are all dedicated to Lantz’s wife, Christy.

Lantz had been undergoing the first-time writer’s slow search for an agent and publisher before getting into contact with Bacorn, who had been considering starting a publishing company. Bacorn signed a few authors to his site before Lantz sent in his submissions, and all three of his novels were published within 30 days.

Upon being published in September, “Zander’s Tale” was the most popular among buyers at first. Now, as the books gain more circulation the longer they’re out online, people are coming back to order the remaining books.

Lantz is currently working on the second part of the “Pine Street” trilogy while working as a general manager at Horn’s True Value Hardware in South Waverly. Back in the early 2000s, he also worked as a reporter in the Troy and Canton area for The Review and as the news editor for CQ News.

“As I got older I decided that I had all these dreams and ideas that I never had worked much on,” Lantz said. “So instead of picking and choosing which ones to do, I’m going to do all of them.”

The first idea he wanted to pursue under “The Healing Project” was to create his own board games. He’s currently building and manufacturing four different prototypes, which he hopes to launch in six months time. His goal with them is to bring people together creatively and play and get off of their screens for a while.

Looking ahead, Lantz hopes that “The Healing Project” will grow into a “community center where people can come to learn skills that they want to learn. Each group would have their own agenda: if someone wanted to learn how to use a saw mill, we could find a teacher to help them.”

For more information about Basil E. Bacorn Publishing of Athens, check out the website at http://publishing.basilebacorn.com.