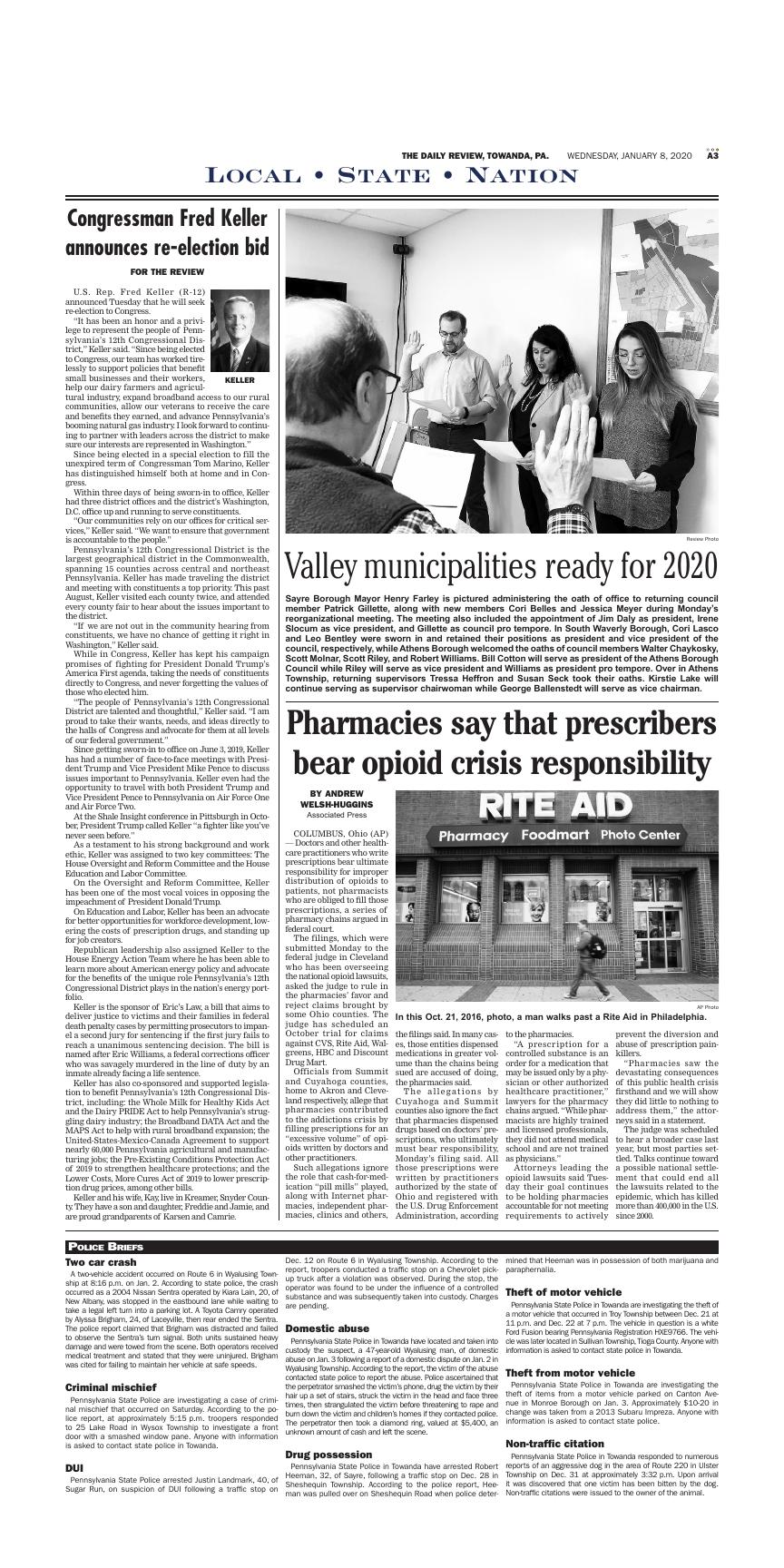 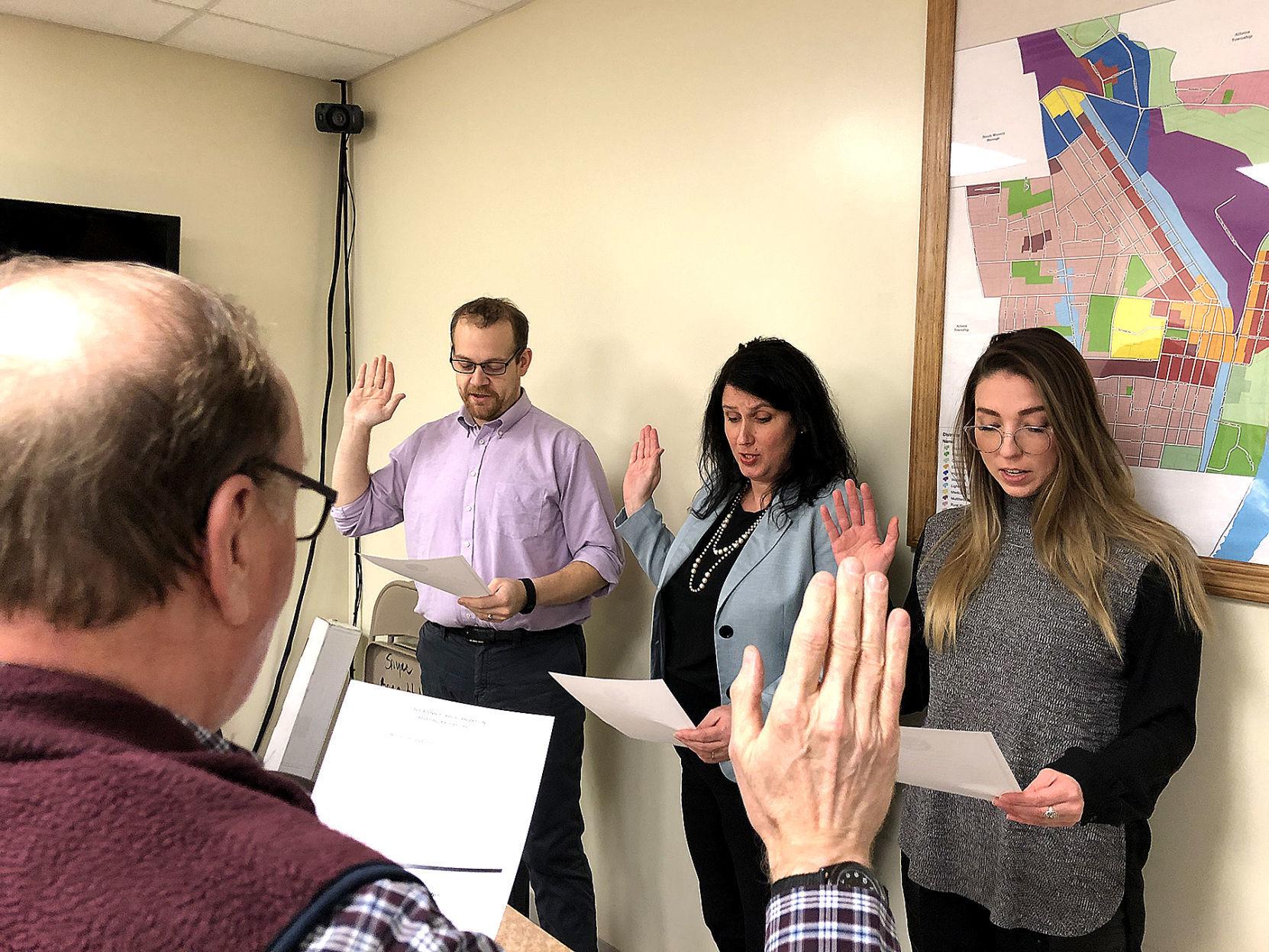 Sayre Borough Mayor Henry Farley is pictured administering the oath of office to returning council member Patrick Gillette, along with new members Cori Belles and Jessica Meyer during Monday’s reorganizational meeting. The meeting also included the appointment of Jim Daly as president, Irene Slocum as vice president, and Gillette as council pro tempore. In South Waverly Borough, Cori Lasco and Leo Bentley were sworn in and retained their positions as president and vice president of the council, respectively, while Athens Borough welcomed the oaths of council members Walter Chaykosky, Scott Molnar, Scott Riley, and Robert Williams. Bill Cotton will serve as president of the Athens Borough Council while Riley will serve as vice president and Williams as president pro tempore. Over in Athens Township, returning supervisors Tressa Heffron and Susan Seck took their oaths. Kirstie Lake will continue serving as supervisor chairwoman while George Ballenstedt will serve as vice chairman.

A two-vehicle accident occurred on Route 6 in Wyalusing Township at 8:16 p.m. on Jan. 2. According to state police, the crash occurred as a 2004 Nissan Sentra operated by Kiara Lain, 20, of New Albany, was stopped in the eastbound lane while waiting to take a legal left turn into a parking lot. A Toyota Camry operated by Alyssa Brigham, 24, of Laceyville, then rear ended the Sentra. The police report claimed that Brigham was distracted and failed to observe the Sentra’s turn signal. Both units sustained heavy damage and were towed from the scene. Both operators received medical treatment and stated that they were uninjured. Brigham was cited for failing to maintain her vehicle at safe speeds.

Pennsylvania State Police are investigating a case of criminal mischief that occurred on Saturday. According to the police report, at approximately 5:15 p.m. troopers responded to 25 Lake Road in Wysox Township to investigate a front door with a smashed window pane. Anyone with information is asked to contact state police in Towanda.

Pennsylvania State Police arrested Justin Landmark, 40, of Sugar Run, on suspicion of DUI following a traffic stop on Dec. 12 on Route 6 in Wyalusing Township. According to the report, troopers conducted a traffic stop on a Chevrolet pickup truck after a violation was observed. During the stop, the operator was found to be under the influence of a controlled substance and was subsequently taken into custody. Charges are pending.

Pennsylvania State Police in Towanda have located and taken into custody the suspect, a 47-year-old Wyalusing man, of domestic abuse on Jan. 3 following a report of a domestic dispute on Jan. 2 in Wyalusing Township. According to the report, the victim of the abuse contacted state police to report the abuse. Police ascertained that the perpetrator smashed the victim’s phone, drug the victim by their hair up a set of stairs, struck the victim in the head and face three times, then strangulated the victim before threatening to rape and burn down the victim and children’s homes if they contacted police. The perpetrator then took a diamond ring, valued at $5,400, an unknown amount of cash and left the scene.

Pennsylvania State Police in Towanda have arrested Robert Heeman, 32, of Sayre, following a traffic stop on Dec. 28 in Sheshequin Township. According to the police report, Heeman was pulled over on Sheshequin Road when police determined that Heeman was in possession of both marijuana and paraphernalia.

Pennsylvania State Police in Towanda are investigating the theft of a motor vehicle that occurred in Troy Township between Dec. 21 at 11 p.m. and Dec. 22 at 7 p.m. The vehicle in question is a white Ford Fusion bearing Pennsylvania Registration HXE9766. The vehicle was later located in Sullivan Township, Tioga County. Anyone with information is asked to contact state police in Towanda.

Pennsylvania State Police in Towanda are investigating the theft of items from a motor vehicle parked on Canton Avenue in Monroe Borough on Jan. 3. Approximately $10-20 in change was taken from a 2013 Subaru Impreza. Anyone with information is asked to contact state police.

Pennsylvania State Police in Towanda responded to numerous reports of an aggressive dog in the area of Route 220 in Ulster Township on Dec. 31 at approximately 3:32 p.m. Upon arrival it was discovered that one victim has been bitten by the dog. Non-traffic citations were issued to the owner of the animal. 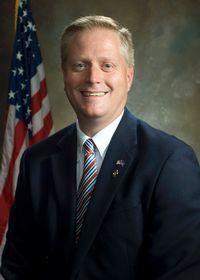 “It has been an honor and a privilege to represent the people of Pennsylvania’s 12th Congressional District,” Keller said. “Since being elected to Congress, our team has worked tirelessly to support policies that benefit small businesses and their workers, help our dairy farmers and agricultural industry, expand broadband access to our rural communities, allow our veterans to receive the care and benefits they earned, and advance Pennsylvania’s booming natural gas industry. I look forward to continuing to partner with leaders across the district to make sure our interests are represented in Washington.”

Since being elected in a special election to fill the unexpired term of Congressman Tom Marino, Keller has distinguished himself both at home and in Congress.

Within three days of being sworn-in to office, Keller had three district offices and the district’s Washington, D.C. office up and running to serve constituents.

“Our communities rely on our offices for critical services,” Keller said. “We want to ensure that government is accountable to the people.”

Pennsylvania’s 12th Congressional District is the largest geographical district in the Commonwealth, spanning 15 counties across central and northeast Pennsylvania. Keller has made traveling the district and meeting with constituents a top priority. This past August, Keller visited each county twice, and attended every county fair to hear about the issues important to the district.

“If we are not out in the community hearing from constituents, we have no chance of getting it right in Washington,” Keller said.

While in Congress, Keller has kept his campaign promises of fighting for President Donald Trump’s America First agenda, taking the needs of constituents directly to Congress, and never forgetting the values of those who elected him.

“The people of Pennsylvania’s 12th Congressional District are talented and thoughtful,” Keller said. “I am proud to take their wants, needs, and ideas directly to the halls of Congress and advocate for them at all levels of our federal government.”

At the Shale Insight conference in Pittsburgh in October, President Trump called Keller “a fighter like you’ve never seen before.”

As a testament to his strong background and work ethic, Keller was assigned to two key committees: The House Oversight and Reform Committee and the House Education and Labor Committee.

On the Oversight and Reform Committee, Keller has been one of the most vocal voices in opposing the impeachment of President Donald Trump.

On Education and Labor, Keller has been an advocate for better opportunities for workforce development, lowering the costs of prescription drugs, and standing up for job creators.

Republican leadership also assigned Keller to the House Energy Action Team where he has been able to learn more about American energy policy and advocate for the benefits of the unique role Pennsylvania’s 12th Congressional District plays in the nation’s energy portfolio.

Keller is the sponsor of Eric’s Law, a bill that aims to deliver justice to victims and their families in federal death penalty cases by permitting prosecutors to impanel a second jury for sentencing if the first jury fails to reach a unanimous sentencing decision. The bill is named after Eric Williams, a federal corrections officer who was savagely murdered in the line of duty by an inmate already facing a life sentence.

Keller has also co-sponsored and supported legislation to benefit Pennsylvania’s 12th Congressional District, including: the Whole Milk for Healthy Kids Act and the Dairy PRIDE Act to help Pennsylvania’s struggling dairy industry; the Broadband DATA Act and the MAPS Act to help with rural broadband expansion; the United-States-Mexico-Canada Agreement to support nearly 60,000 Pennsylvania agricultural and manufacturing jobs; the Pre-Existing Conditions Protection Act of 2019 to strengthen healthcare protections; and the Lower Costs, More Cures Act of 2019 to lower prescription drug prices, among other bills.

Keller and his wife, Kay, live in Kreamer, Snyder County. They have a son and daughter, Freddie and Jamie, and are proud grandparents of Karsen and Camrie. 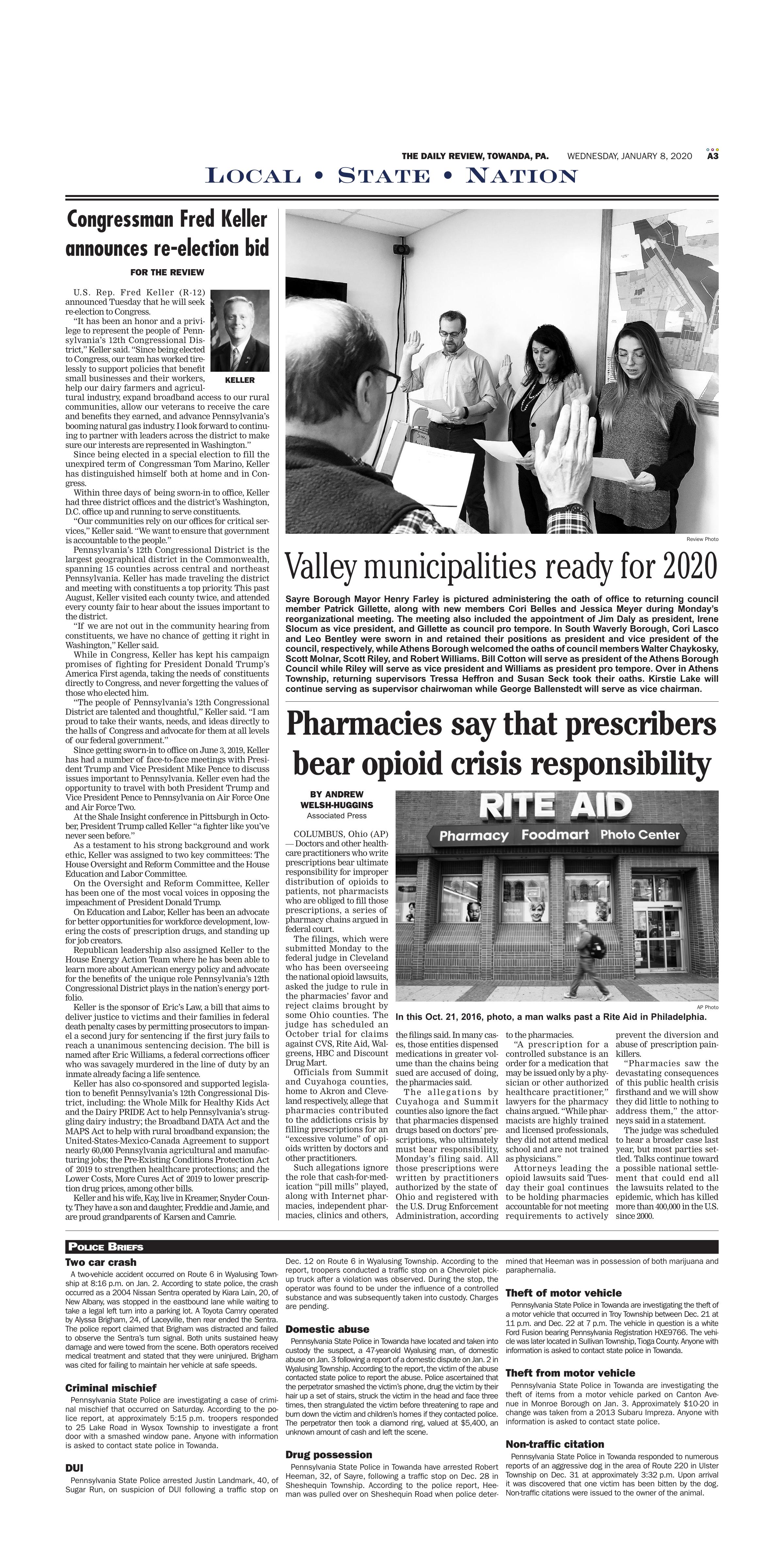