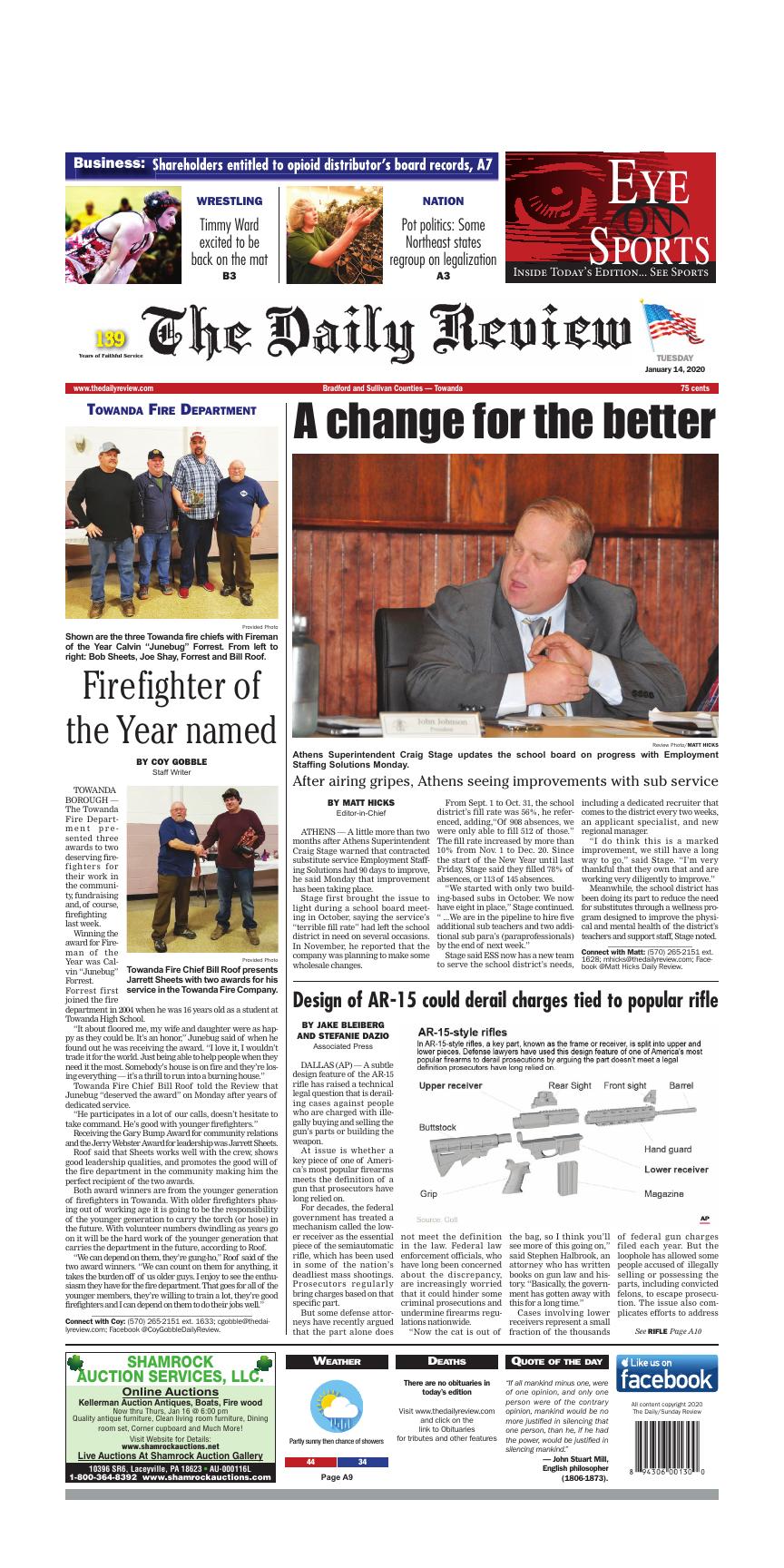 ATHENS — A little more than two months after Athens Superintendent Craig Stage warned that contracted substitute service Employment Staffing Solutions had 90 days to improve, he said Monday that improvement has been taking place.

Stage first brought the issue to light during a school board meeting in October, saying the service’s “terrible fill rate” had left the school district in need on several occasions. In November, he reported that the company was planning to make some wholesale changes.

“We started with only two building-based subs in October. We now have eight in place,” Stage continued. “ ...We are in the pipeline to hire five additional sub teachers and two additional sub para’s (paraprofessionals) by the end of next week.”

Stage said ESS now has a new team to serve the school district’s needs, including a dedicated recruiter that comes to the district every two weeks, an applicant specialist, and new regional manager.

“I do think this is a marked improvement, we still have a long way to go,” said Stage. “I’m very thankful that they own that and are working very diligently to improve.”

Meanwhile, the school district has been doing its part to reduce the need for substitutes through a wellness program designed to improve the physical and mental health of the district’s teachers and support staff, Stage noted.

TOWANDA BOROUGH — The Towanda Fire Department presented three awards to two deserving firefighters for their work in the community, fundraising and, of course, firefighting last week.

Winning the award for Fireman of the Year was Calvin “Junebug” Forrest. Forrest first joined the fire department in 2004 when he was 16 years old as a student at Towanda High School.

“It about floored me, my wife and daughter were as happy as they could be. It’s an honor,” Junebug said of when he found out he was receiving the award. “I love it, I wouldn’t trade it for the world. Just being able to help people when they need it the most. Somebody’s house is on fire and they’re losing everything — it’s a thrill to run into a burning house.”

Towanda Fire Chief Bill Roof told the Review that Junebug “deserved the award” on Monday after years of dedicated service.

“He participates in a lot of our calls, doesn’t hesitate to take command. He’s good with younger firefighters.”

Receiving the Gary Bump Award for community relations and the Jerry Webster Award for leadership was Jarrett Sheets.

Roof said that Sheets works well with the crew, shows good leadership qualities, and promotes the good will of the fire department in the community making him the perfect recipient of the two awards.

“We can depend on them, they’re gung-ho,” Roof said of the two award winners. “We can count on them for anything, it takes the burden off of us older guys. I enjoy to see the enthusiasm they have for the fire department. That goes for all of the younger members, they’re willing to train a lot, they’re good firefighters and I can depend on them to do their jobs well.” 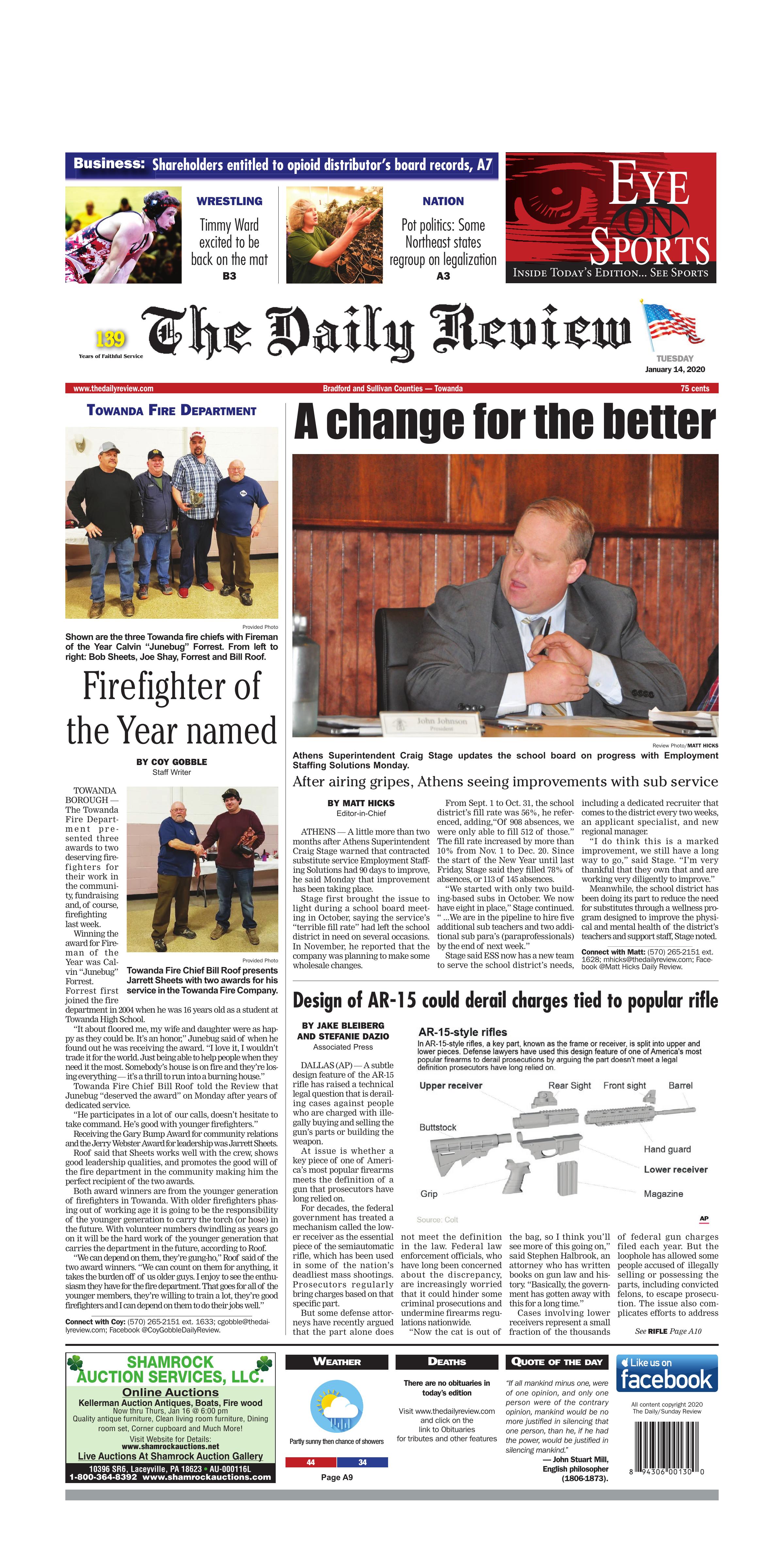