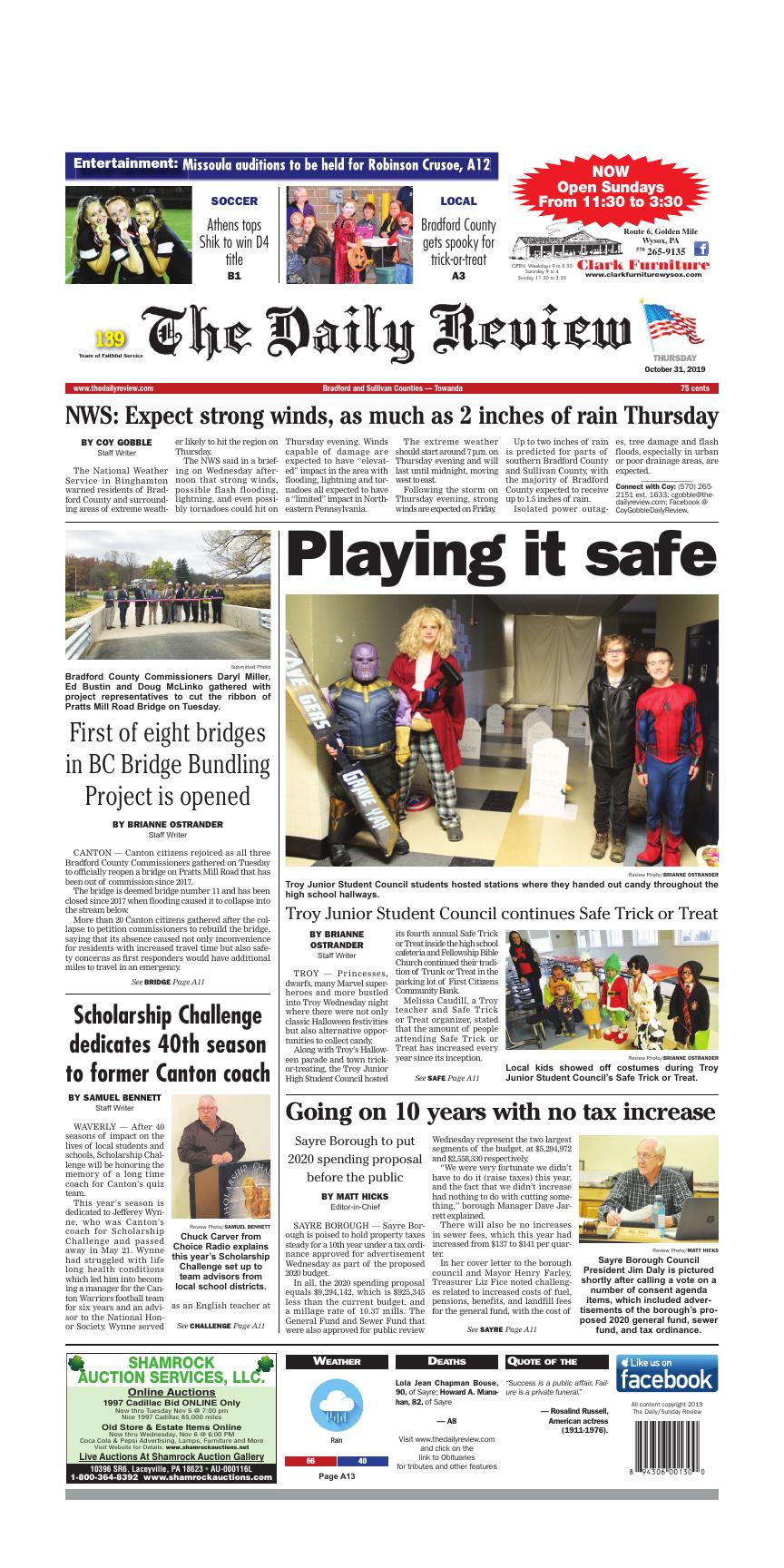 The National Weather Service in Binghamton warned residents of Bradford County and surrounding areas of extreme weather likely to hit the region on Thursday.

The extreme weather should start around 7 p.m. on Thursday evening and will last until midnight, moving west to east.

Following the storm on Thursday evening, strong winds are expected on Friday.

TROY — Princesses, dwarfs, many Marvel superheroes and more bustled into Troy Wednesday night where there were not only classic Halloween festivities but also alternative opportunities to collect candy.

Along with Troy’s Halloween parade and town trick-or-treating, the Troy Junior High Student Council hosted its fourth annual Safe Trick or Treat inside the high school cafeteria and Fellowship Bible Church continued their tradition of Trunk or Treat in the parking lot of First Citizens Community Bank.

Caudill told that 967 locals took part in the event, which is run by seventh and eighth grade students this year.

Safe Trick or Treat was initiated by Caudill after she moved to the district from Northeast Bradford where the event was held due to the largely rural layout of the area.

Caudill told that Safe Trick or Treat also provided a big event for the seventh and eighth grade students to host as they did not have any large-scale affairs like the high school student council hosts.

Safe Trick or Treat welcomes all community members into the hallways and cafeteria of the high school to collect candy from stations of student council students, partake in a spooky hallway, have their faces painted, create crafts and, new this year, to compete in a costume contest.

Caudill stated that while Troy’s costume contest is usually held prior to the parade at W.R. Croman, this year the student council teamed up with the borough to host it during Safe Trick or Treat and saw a successful turnout.

“I just expect it to get bigger and better for next year,” Caudill commented.

Caudill noted that Safe Trick or Treat serves as an option for trick-or-treating before the parade instead of the traditional town trick-or-treat which is held afterwards and can sometimes be much colder and is always held in the dark.

“We wanted to give an opportunity for the younger kids...to come out and trick or treat where it’s warm, where it’s safe, where you’re inside and you can do a couple crafts and just hang out and be warm until the parade and not feel rushed,” she said.

SAYRE BOROUGH — Sayre Borough is poised to hold property taxes steady for a 10th year under a tax ordinance approved for advertisement Wednesday as part of the proposed 2020 budget.

“We were very fortunate we didn’t have to do it (raise taxes) this year, and the fact that we didn’t increase had nothing to do with cutting something,” borough Manager Dave Jarrett explained.

There will also be no increases in sewer fees, which this year had increased from $137 to $141 per quarter.

In her cover letter to the borough council and Mayor Henry Farley, Treasurer Liz Fice noted challenges related to increased costs of fuel, pensions, benefits, and landfill fees for the general fund, with the cost of infrastructure projects and debt service providing challenges for the sewer fund.

“We sharpened our pencils and tightened up all general fund expenditures as much as possible without having to cut any services,” Fice wrote. “We have reduced but not eliminated the amount being placed in the Capital Reserve Fund, which allows us to still save for the next capital purchases. The borough manager continues to apply for grant funds, which allow for major purchases or projects to be done using minimal funds of the borough. By doing these things we were able to hold the line and no increases are required this year for our general fund.”

With the $2,558,330 sewer fund, Fice said tightening up expenditures and “an outstanding effort put into the collection of sewer fees” helped offset any increases there.

Jarrett said the borough is already looking at the financial picture for the 2021, and there is a possibility that property taxes might not have to be raised again. But by the time the 2022 budget comes around, Jarrett said, “I think it’s inevitable.”

“The concern with previous councils has always been: Are we going to get a big, proverbial punch in the nose someday? And we assured through the budget process that we will not let that happen,” Jarrett continued. “Every month, council gets this 40-some page report that tells you where you stand with every line item and we monitor it. If adjustments have to be made mid-year they are made mid-year. If budgets have to be frozen this time of year we will freeze them — we just won’t approve purchase orders. Our department heads do an outstanding job of staying within their budgets. A line item here or there might go over, but then line items that are under help balance it out.”

Jarrett noted that some measures have been implemented over the years to help offset expenditures, such as the Local Services Tax approved in 2016 that required those working within the borough to pay $52 a year. With impact fee money generated from the natural gas industry, Jarrett said the borough has been careful with its use since it won’t be around forever.

The proposed 2020 budget is currently available on the borough’s website. An official public display period will take place between Nov. 4 and 15 at the borough hall and Sayre Public Library, with a final vote from the council expected on Nov. 20.

Shown is a plaque located at the Pratts Mill Road Bridge.

CANTON — Canton citizens rejoiced as all three Bradford County Commissioners gathered on Tuesday to officially reopen a bridge on Pratts Mill Road that has been out of commission since 2017.

The bridge is deemed bridge number 11 and has been closed since 2017 when flooding caused it to collapse into the stream below.

More than 20 Canton citizens gathered after the collapse to petition commissioners to rebuild the bridge, saying that its absence caused not only inconvenience for residents with increased travel time but also safety concerns as first responders would have additional miles to travel in an emergency.

The Pratts Mill Road Bridge served as the first of eight bridges and box culverts to be replaced through the commissioners’ Bradford County Bridge Bundling Project.

“Using Act 13 impact fees the county is rebuilding key pieces of the county bridge inventory and addressing the transportation needs at a time when traditional bridge replacement funding sources are limited,” stated a press release published by the commissioners’ office.

The commissioners have worked with Larson Design Group and County Planning Director Matt Williams to “(create) a unique bridge bundling program that will maximize our ability to replace and repair our most at risk bridges.”

“By bidding bridge projects as bundles we are saving over $2 million in project cost and will fix eight bridges in less than two years,” the press release detailed.

WAVERLY — After 40 seasons of impact on the lives of local students and schools, Scholarship Challenge will be honoring the memory of a long time coach for Canton’s quiz team.

This year’s season is dedicated to Jefferey Wynne, who was Canton’s coach for Scholarship Challenge and passed away in May 21. Wynne had struggled with life long health conditions which led him into becoming a manager for the Canton Warriors football team for six years and an advisor to the National Honor Society. Wynne served as an English teacher at Canton Jr./Sr. High School and helped with many other school activities.

“Just a beloved human being who had been part of the challenge for at least 20 years and probably longer than that,” said Chuck Carver.

Team advisors, school administrators, Choice Radio staff and owner Chuck Carver were in attendance of an annual banquet on Wednesday to discuss this year’s upcoming season.

“We will kick off the 40th season of our award winning broadcast, which as you all know, is much more than a radio show,” said Carver at the banquet. “It’s a community event that encompasses — my notes say — eight counties and two states.”

“We have been told by both our state associations that this is the longest running radio program in both New York and Pennsylvania,” stated Carver. “How do you confirm that? I don’t know, but we have reached out to associations to try to confirm that. Either way, 40 years I think is pretty amazing.”

The challenge is set to begin on Jan. 25 with all the rounds being broadcast from the Patterson Auditorium at the Guthrie Robert Packer Hospital campus in Sayre. The event is open for the public to attend and the finals will air on March 14. 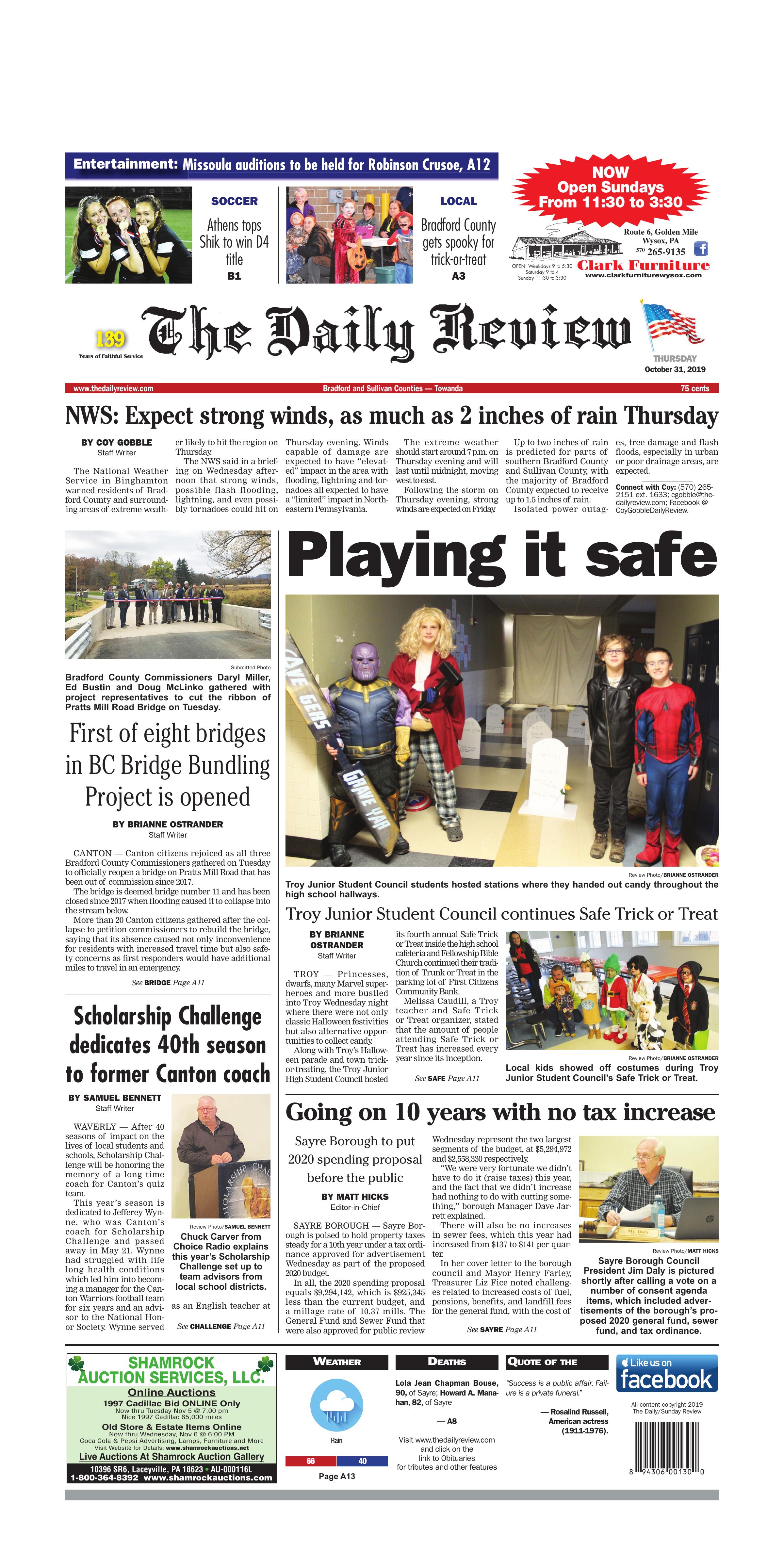