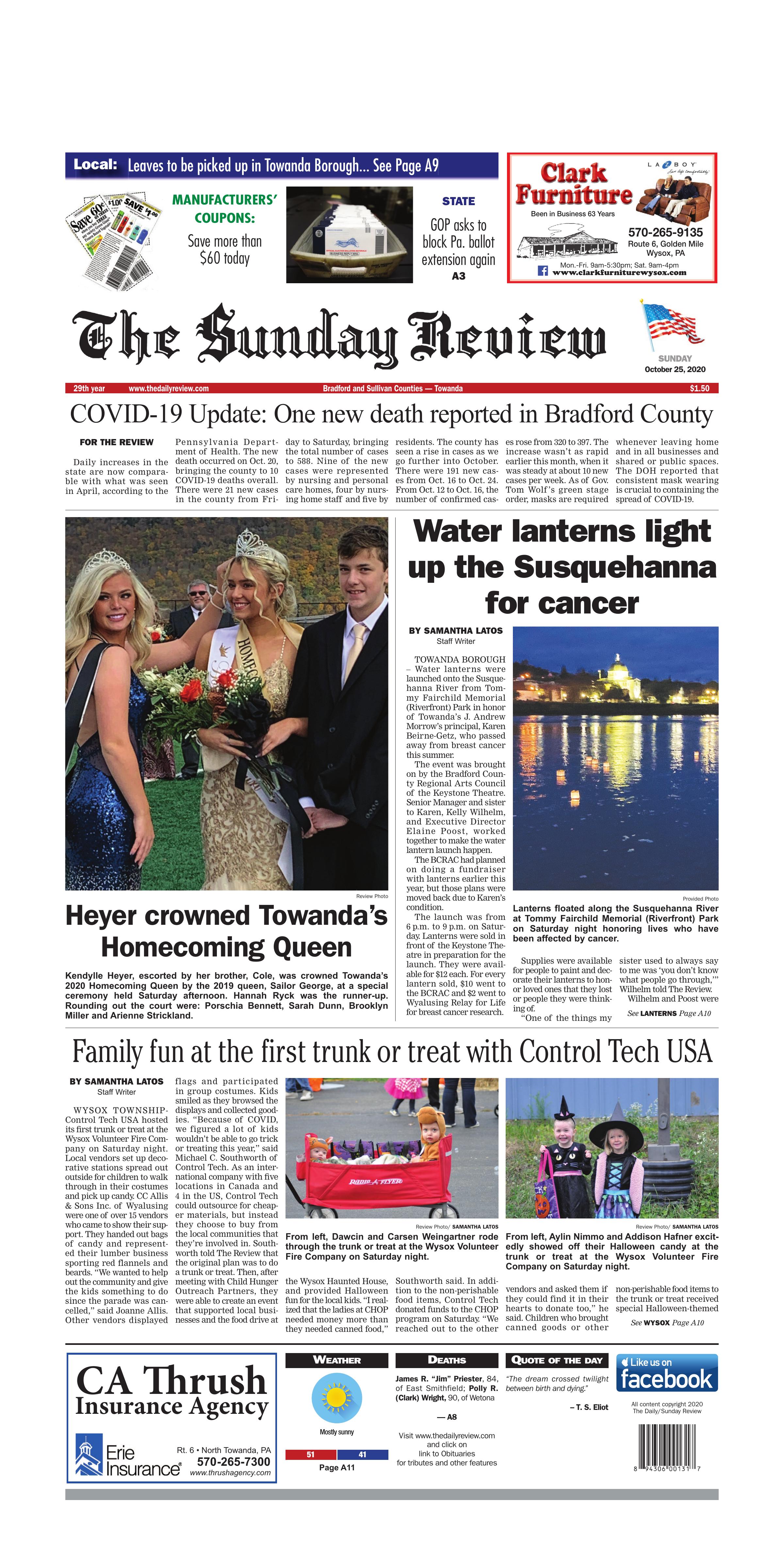 Daily increases in the state are now comparable with what was seen in April, according to the Pennsylvania Department of Health. The new death occurred on Oct. 20, bringing the county to 10 COVID-19 deaths overall. There were 21 new cases in the county from Friday to Saturday, bringing the total number of cases to 588. Nine of the new cases were represented by nursing and personal care homes, four by nursing home staff and five by residents. The county has seen a rise in cases as we go further into October. There were 191 new cases from Oct. 16 to Oct. 24. From Oct. 12 to Oct. 16, the number of confirmed cases rose from 320 to 397. The increase wasn’t as rapid earlier this month, when it was steady at about 10 new cases per week. As of Gov. Tom Wolf’s green stage order, masks are required whenever leaving home and in all businesses and shared or public spaces. The DOH reported that consistent mask wearing is crucial to containing the spread of COVID-19.

From left, Dawcin and Carsen Weingartner rode through the trunk or treat at the Wysox Volunteer Fire Company on Saturday night.

From left, Aylin Nimmo and Addison Hafner excitedly showed off their Halloween candy at the trunk or treat at the Wysox Volunteer Fire Company on Saturday night.

CC Allis & Sons Inc. of Wyalusing represented their lumber business and Halloween spirit with red flannels, fake beards and an axe at the trunk or treat on Saturday night at the Wysox Volunteer Fire Company.

WYSOX TOWNSHIP- Control Tech USA hosted its first trunk or treat at the Wysox Volunteer Fire Company on Saturday night. Local vendors set up decorative stations spread out outside for children to walk through in their costumes and pick up candy.

CC Allis & Sons Inc. of Wyalusing were one of over 15 vendors who came to show their support. They handed out bags of candy and represented their lumber business sporting red flannels and beards. “We wanted to help out the community and give the kids something to do since the parade was cancelled,” said Joanne Allis.

Other vendors displayed flags and participated in group costumes. Kids smiled as they browsed the displays and collected goodies. “Because of COVID, we figured a lot of kids wouldn’t be able to go trick or treating this year,” said Michael C. Southworth of Control Tech.

As an international company with five locations in Canada and 4 in the US, Control Tech could outsource for cheaper materials, but instead they choose to buy from the local communities that they’re involved in. Southworth told The Review that the original plan was to do a trunk or treat. Then, after meeting with Child Hunger Outreach Partners, they were able to create an event that supported local businesses and the food drive at the Wysox Haunted House, and provided Halloween fun for the local kids.

“I realized that the ladies at CHOP needed money more than they needed canned food,” Southworth said.

In addition to the non-perishable food items, Control Tech donated funds to the CHOP program on Saturday. “We reached out to the other vendors and asked them if they could find it in their hearts to donate too,” he said.

Children who brought canned goods or other non-perishable food items to the trunk or treat received special Halloween-themed gifts, like vampire teeth and festive erasers.

Southworth noted that the trunk or treat will continue for years to come. He said that next year’s event will be “even more over the top.” 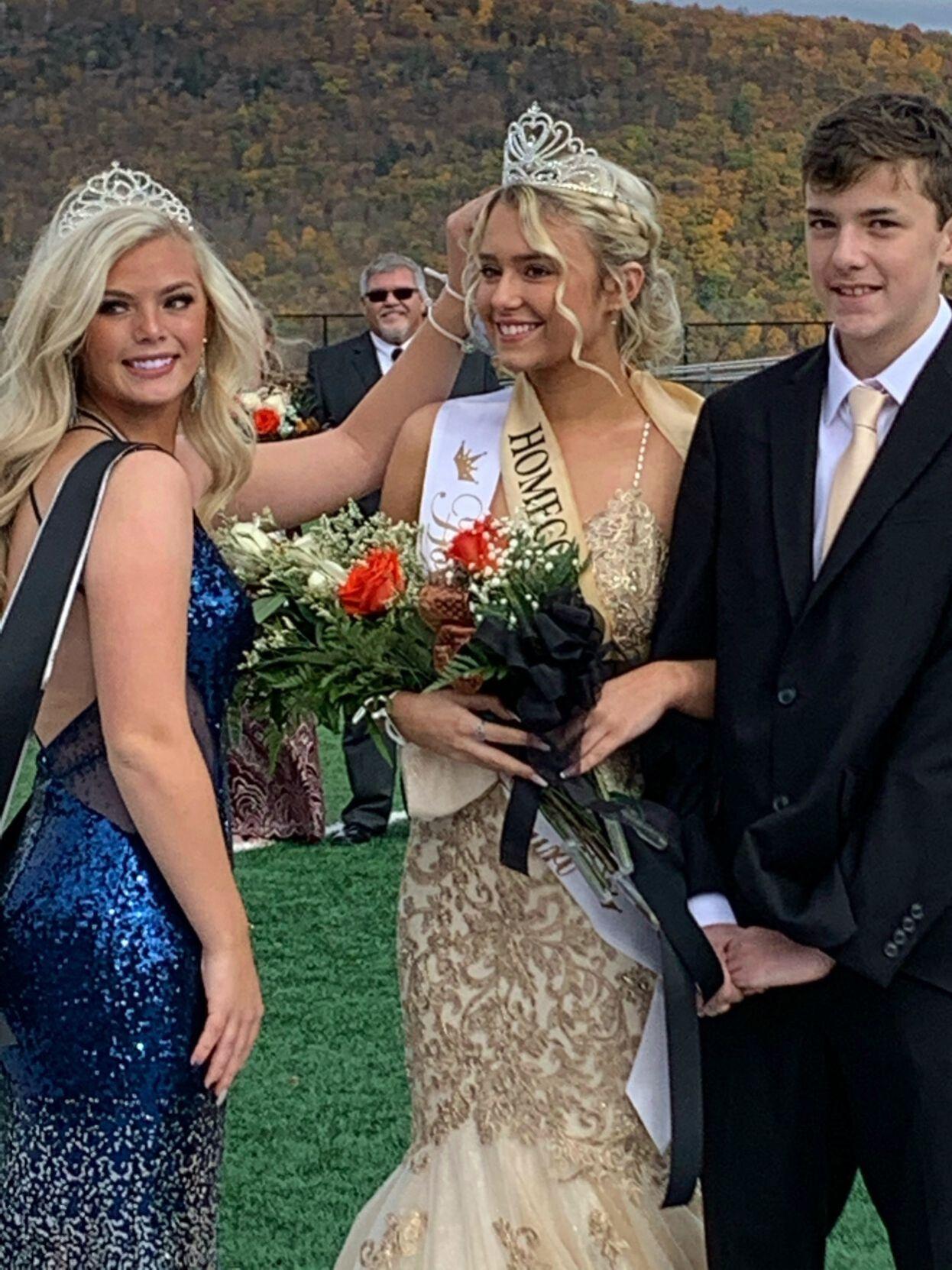 Kendylle Heyer, escorted by her brother, Cole, was crowned Towanda’s 2020 Homecoming Queen by the 2019 queen, Sailor George, at a special ceremony held Saturday afternoon. Hannah Ryck was the runner-up. Rounding out the court were: Porschia Bennett, Sarah Dunn, Brooklyn Miller and Arienne Strickland.

The event was brought on by the Bradford County Regional Arts Council of the Keystone Theatre. Senior Manager and sister to Karen, Kelly Wilhelm, and Executive Director Elaine Poost, worked together to make the water lantern launch happen.

The BCRAC had planned on doing a fundraiser with lanterns earlier this year, but those plans were moved back due to Karen’s condition.

The launch was from 6 p.m. to 9 p.m. on Saturday. Lanterns were sold in front of the Keystone Theatre in preparation for the launch. They were available for $12 each. For every lantern sold, $10 went to the BCRAC and $2 went to Wyalusing Relay for Life for breast cancer research.

Supplies were available for people to paint and decorate their lanterns to honor loved ones that they lost or people they were thinking of.

“One of the things my sister used to always say to me was ‘you don’t know what people go through,’” Wilhelm told The Review.

Wilhelm and Poost were mindful of the recent surge in COVID-19 cases in the county and opted out of serving food other than popcorn and advised social distancing. People also had the option to drive by and see the lanterns on the river.

“Even if people don’t stay for the music, the lanterns, and the movie, and if they just come for one of those elements, I’m hoping for a big turnout for the fundraiser because that’s what’s going to help people,” Kevin Doupe said.

Doupe’s performance was cancelled, and the launch was moved to 6:45 p.m.

Poost said that water lantern floats are traditionally done in memory of people, and are also done to celebrate new life and new beginnings. She noted that, in the event they didn’t sell all of the 100+ lanterns they bought, that they’d send them all off on the river anyway.

“Everybody is touched by beauty and we need a lot more of it right now,” Poost said, “The community has gone through a lot in 2020; everybody has. It seems like the perfect time to gather and do something beautiful.”

“It’s a way to recognize breast cancer awareness, promote kindness, and of course celebrate my sister,” Wilhelm said, “She implemented a lot of programs for little kids, and so we thought we’d do the free movie in honor of her.”

A drive-in style showing of “The Addams Family” was going to start at 7:30 p.m. Due to weather, the movie was postponed to Friday, Oct. 30 at the park.

Poost noted that the biodegradable lanterns were later retrieved from the water from the Towanda bridge.