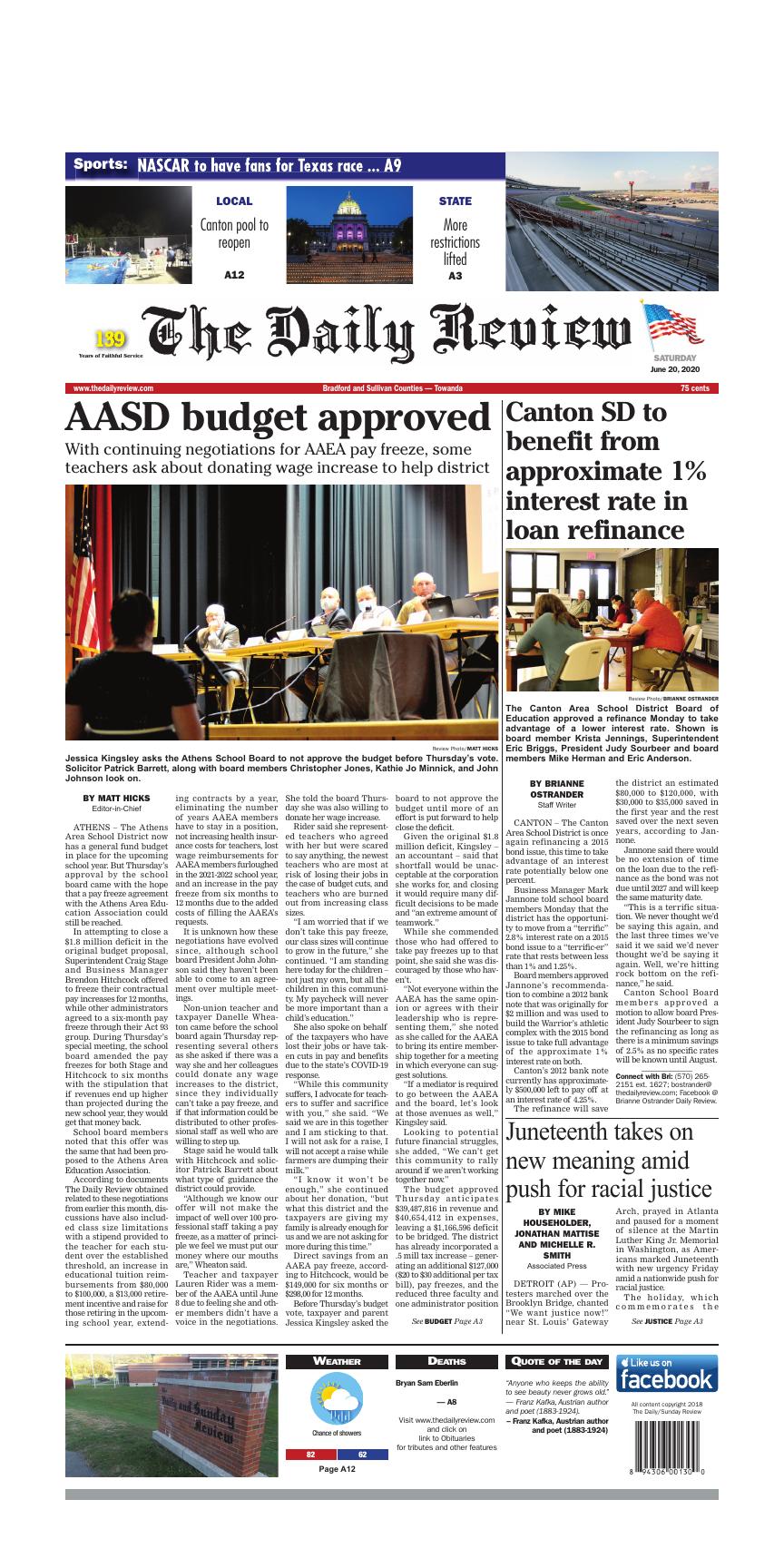 Jessica Kingsley asks the Athens School Board to not approve the budget before Thursday’s vote. Solicitor Patrick Barrett, along with board members Christopher Jones, Kathie Jo Minnick, and John Johnson look on.

ATHENS – The Athens Area School District now has a general fund budget in place for the upcoming school year. But Thursday’s approval by the school board came with the hope that a pay freeze agreement with the Athens Area Education Association could still be reached.

In attempting to close a $1.8 million deficit in the original budget proposal, Superintendent Craig Stage and Business Manager Brendon Hitchcock offered to freeze their contractual pay increases for 12 months, while other administrators agreed to a six-month pay freeze through their Act 93 group. During Thursday’s special meeting, the school board amended the pay freezes for both Stage and Hitchcock to six months with the stipulation that if revenues end up higher than projected during the new school year, they would get that money back.

School board members noted that this offer was the same that had been proposed to the Athens Area Education Association.

According to documents The Daily Review obtained related to these negotiations from earlier this month, discussions have also included class size limitations with a stipend provided to the teacher for each student over the established threshold, an increase in educational tuition reimbursements from $80,000 to $100,000, a $13,000 retirement incentive and raise for those retiring in the upcoming school year, extending contracts by a year, eliminating the number of years AAEA members have to stay in a position, not increasing health insurance costs for teachers, lost wage reimbursements for AAEA members furloughed in the 2021-2022 school year, and an increase in the pay freeze from six months to 12 months due to the added costs of filling the AAEA’s requests.

It is unknown how these negotiations have evolved since, although school board President John Johnson said they haven’t been able to come to an agreement over multiple meetings.

Non-union teacher and taxpayer Danelle Wheaton came before the school board again Thursday representing several others as she asked if there was a way she and her colleagues could donate any wage increases to the district, since they individually can’t take a pay freeze, and if that information could be distributed to other professional staff as well who are willing to step up.

Stage said he would talk with Hitchcock and solicitor Patrick Barrett about what type of guidance the district could provide.

“Although we know our offer will not make the impact of well over 100 professional staff taking a pay freeze, as a matter of principle we feel we must put our money where our mouths are,” Wheaton said.

Teacher and taxpayer Lauren Rider was a member of the AAEA until June 8 due to feeling she and other members didn’t have a voice in the negotiations. She told the board Thursday she was also willing to donate her wage increase.

“I am worried that if we don’t take this pay freeze, our class sizes will continue to grow in the future,” she continued. “I am standing here today for the children – not just my own, but all the children in this community. My paycheck will never be more important than a child’s education.”

She also spoke on behalf of the taxpayers who have lost their jobs or have taken cuts in pay and benefits due to the state’s COVID-19 response.

“While this community suffers, I advocate for teachers to suffer and sacrifice with you,” she said. “We said we are in this together and I am sticking to that. I will not ask for a raise, I will not accept a raise while farmers are dumping their milk.”

“I know it won’t be enough,” she continued about her donation, “but what this district and the taxpayers are giving my family is already enough for us and we are not asking for more during this time.”

Before Thursday’s budget vote, taxpayer and parent Jessica Kingsley asked the board to not approve the budget until more of an effort is put forward to help close the deficit.

Given the original $1.8 million deficit, Kingsley – an accountant – said that shortfall would be unacceptable at the corporation she works for, and closing it would require many difficult decisions to be made and “an extreme amount of teamwork.”

While she commended those who had offered to take pay freezes up to that point, she said she was discouraged by those who haven’t.

“Not everyone within the AAEA has the same opinion or agrees with their leadership who is representing them,” she noted as she called for the AAEA to bring its entire membership together for a meeting in which everyone can suggest solutions.

“If a mediator is required to go between the AAEA and the board, let’s look at those avenues as well,” Kingsley said.

Looking to potential future financial struggles, she added, “We can’t get this community to rally around if we aren’t working together now.”

The budget approved Thursday anticipates $39,487,816 in revenue and $40,654,412 in expenses, leaving a $1,166,596 deficit to be bridged. The district has already incorporated a .5 mill tax increase – generating an additional $127,000 ($20 to $30 additional per tax bill), pay freezes, and the reduced three faculty and one administrator position through attrition.

An additional $616,000 in revenues was added to the budget proposal from the initial draft that will be placed in reserves to help with the safe reopening of school and to make sure the district can remain flexible with learning if need be. This includes a $198,000 school safety grant, which Hitchcock said usually provides $35,000, and $495,000 from the federal Elementary and Secondary School Emergency Relief program.

Other savings measures included withholding reserve contributions for future paving and turf and track replacement at $143,000.

Hitchcock said the district is currently in a good position financially with a healthy fund balance – projected to finish the current school year at a little more than $10 million – to help weather immediate challenges. With reserves to cover about $552,000 of the $1,166,596 deficit, Hitchcock said unassigned fund balance will cover the rest.

Lonnie Stethers didn’t participate in the vote due to his resignation from the board. Kathy Jo Minnick was appointed to fill his role as school board vice president.

Stethers represented Athens Borough in the Region I seat. His term was set to expire December 2021.

Those interested in applying for the vacancy are asked to contact Christine Middlecamp, board secretary, at (570) 888-7766 ext. 4279. Applications must be submitted by 4 p.m. July 9.

The school board will meet July 14 to fill the vacancy.

The Canton Area School District Board of Education approved a refinance Monday to take advantage of a lower interest rate. Shown is board member Krista Jennings, Superintendent Eric Briggs, President Judy Sourbeer and board members Mike Herman and Eric Anderson.

CANTON – The Canton Area School District is once again refinancing a 2015 bond issue, this time to take advantage of an interest rate potentially below one percent.

Business Manager Mark Jannone told school board members Monday that the district has the opportunity to move from a “terrific” 2.8% interest rate on a 2015 bond issue to a “terrific-er” rate that rests between less than 1% and 1.25%.

Board members approved Jannone’s recommendation to combine a 2012 bank note that was originally for $2 million and was used to build the Warrior’s athletic complex with the 2015 bond issue to take full advantage of the approximate 1% interest rate on both.

Jannone said there would be no extension of time on the loan due to the refinance as the bond was not due until 2027 and will keep the same maturity date.

Canton School Board members approved a motion to allow board President Judy Sourbeer to sign the refinancing as long as there is a minimum savings of 2.5% as no specific rates will be known until August. 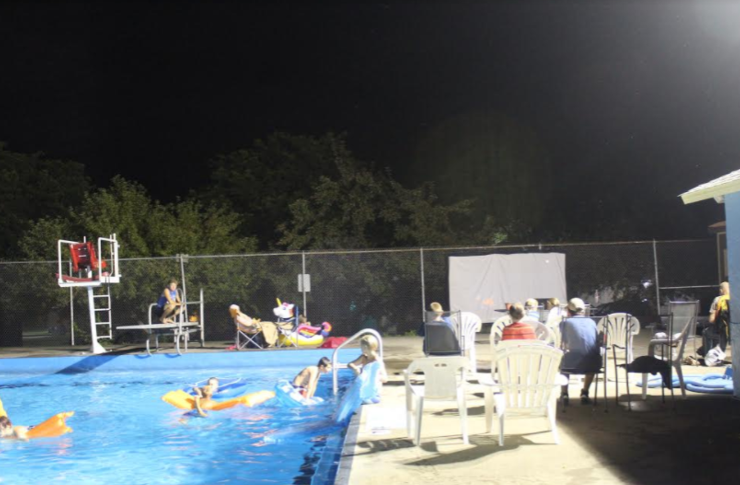 Canton pool (shown above during summer 2019) will soon be open for business - but with restrictions due to COVID-19. 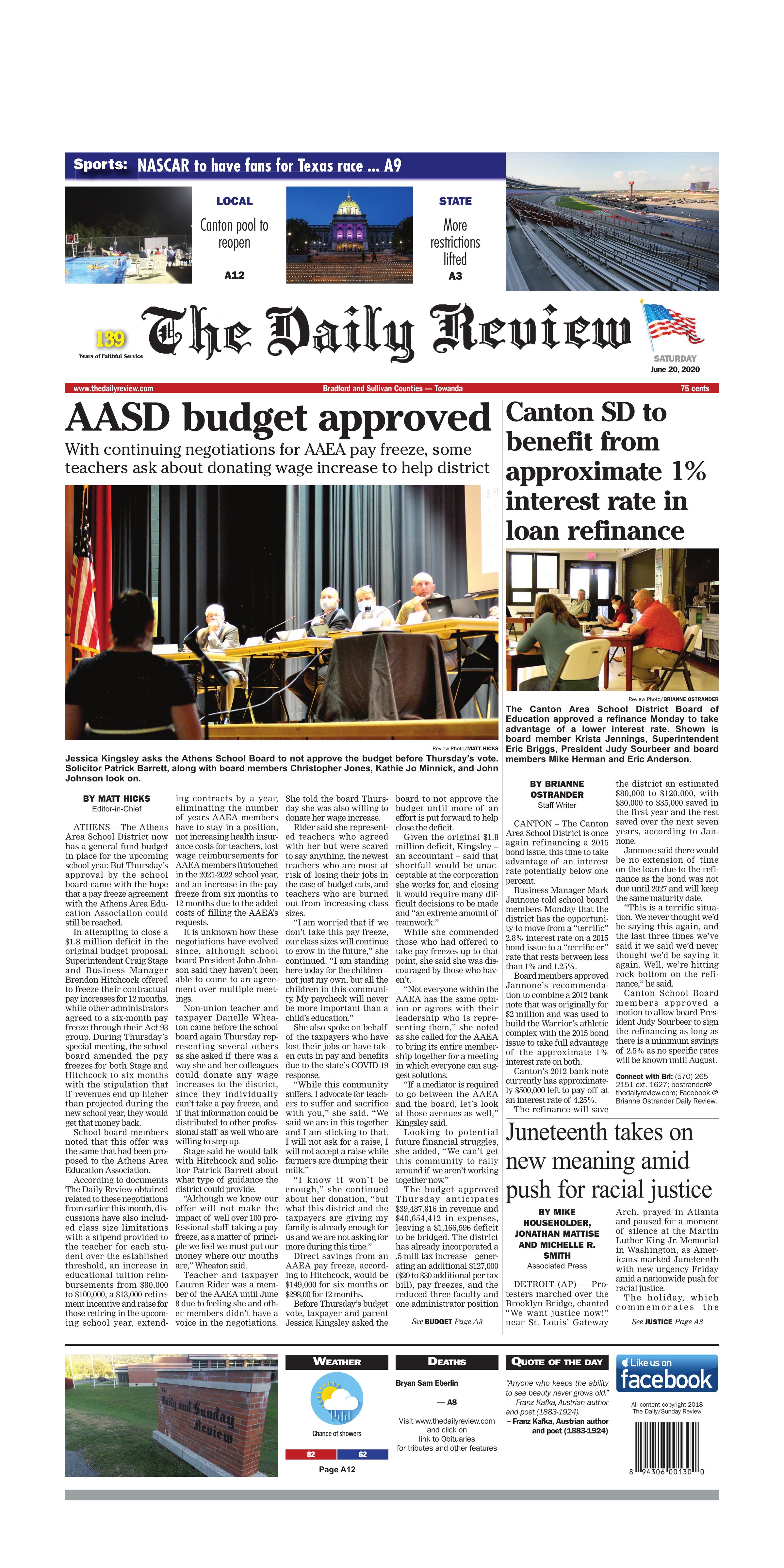