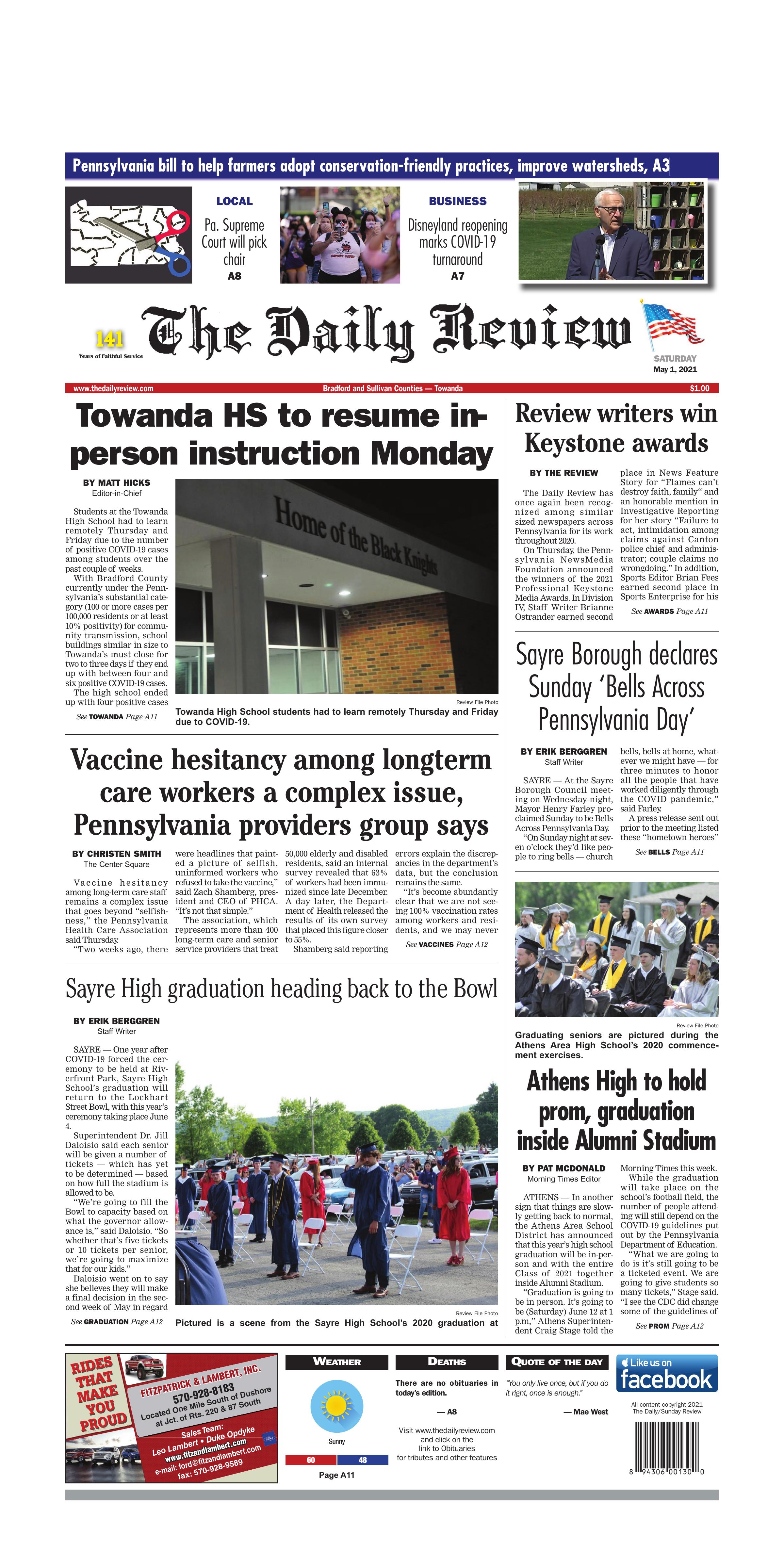 Towanda High School students had to learn remotely Thursday and Friday due to COVID-19.

Students at the Towanda High School had to learn remotely Thursday and Friday due to the number of positive COVID-19 cases among students over the past couple of weeks.

With Bradford County currently under the Pennsylvania’s substantial category (100 or more cases per 100,000 residents or at least 10% positivity) for community transmission, school buildings similar in size to Towanda’s must close for two to three days if they end up with between four and six positive COVID-19 cases.

The high school ended up with four positive cases after being notified Wednesday about two students who were last in school on Friday, April 23.

All extra-curricular activities resumed on 3:15 p.m. Friday, while in-person instruction will resume Monday.

“I cannot emphasize enough how much we need your help in keeping our buildings open. Please do not send your students to school if they are not feeling well or you have a potential COVID-19 situation that could potentially involve them. We would rather you err on the side of caution with these types of situations,” Superintendent Dennis Peachey reiterated in a public announcement Wednesday. “As a community, the key to our success is to continue working together as we strive to keep our students, faculty, and staff safe and healthy. Thank you again for working collaboratively with the district as we navigate through this public health crisis together. Stay safe and stay healthy.”

Meanwhile, Bradford County has gained two additional COVID-19-related deaths from Wednesday and Thursday after going more than two weeks without any increase. Friday’s reporting from the Pennsylvania Department of Health also included 46 new confirmed cases from these two days. The county has had 270 new confirmed COVID-19 cases over the past two weeks.

“Two weeks ago, there were headlines that painted a picture of selfish, uninformed workers who refused to take the vaccine,” said Zach Shamberg, president and CEO of PHCA. “It’s not that simple.”

The association, which represents more than 400 long-term care and senior service providers that treat 50,000 elderly and disabled residents, said an internal survey revealed that 63% of workers had been immunized since late December. A day later, the Department of Health released the results of its own survey that placed this figure closer to 55%.

Shamberg said reporting errors explain the discrepancies in the department’s data, but the conclusion remains the same.

“It’s become abundantly clear that we are not seeing 100% vaccination rates among workers and residents, and we may never see that,” he said. “[But] we should not cast immediate judgment.”

The association said its internal survey revealed many reasons why workers may have refused the vaccine, so far. Many were waiting for the Johnson & Johnson one-shot immunization, while others said their physicians advised them to delay vaccination due to pregnancy or a prior COVID-19 infection. Rumors of infertility following vaccination played a role, too, Shamberg said.

“It’s clear vaccination education in our communities, including long-term care facilities, must continue,” he said. “We stand ready to work with community groups and leaders to ensure that all front line workers and residents receive the information they need to make an informed decision.”

Distrust of the government and vaccinations, in general, persists, particularly in communities of color. Many staff and residents felt uneasy about the newness of the vaccine – a factor that’s dissipated since the first federal vaccine clinics began inside facilities on Dec. 28, 2020.

“There are personal and multipronged reasons people have not taken it,” said Kathy Derleth, the chief nursing officer for Bedrock Care in Philadelphia. “It was two weeks after federal approval that we had our clinics. It was just so new.”

Immunization rates among residents fared better on the association’s survey, with 83% of those living in nursing homes and 97% of those in assisted living and personal care facilities reported full vaccination.

As of Thursday, about 8.3 million vaccinations have been administered statewide. The department data suggests about 40% of residents are fully immunized.

Pictured is a scene from the Sayre High School’s 2020 graduation at Riverfront Park.

SAYRE — One year after COVID-19 forced the ceremony to be held at Riverfront Park, Sayre High School’s graduation will return to the Lockhart Street Bowl, with this year’s ceremony taking place June 4.

Superintendent Dr. Jill Daloisio said each senior will be given a number of tickets — which has yet to be determined — based on how full the stadium is allowed to be.

“We’re going to fill the Bowl to capacity based on what the governor allowance is,” said Daloisio. “So whether that’s five tickets or 10 tickets per senior, we’re going to maximize that for our kids.”

Daloisio went on to say she believes they will make a final decision in the second week of May in regard to how many tickets will be available.

The ceremony will also be live streamed on the school’s YouTube channel, for anyone who wishes to watch from the comfort of their own homes.

Last year the school held a “drive-in theater” style graduation in Riverfront Park due to restrictions caused by the COVID-19 pandemic.

According to Daloisio, the move back to the Lockhart Street Bowl marks a return of local tradition.

“We want to provide that tradition to the families, the community, and the seniors most (of all),” said Daloisio. “We’re going to do that with the allowable accommodations that are in place.”

The Daily Review has once again been recognized among similar sized newspapers across Pennsylvania for its work throughout 2020.

On Thursday, the Pennsylvania NewsMedia Foundation announced the winners of the 2021 Professional Keystone Media Awards. In Division IV, Staff Writer Brianne Ostrander earned second place in News Feature Story for “Flames can’t destroy faith, family“ and an honorable mention in Investigative Reporting for her story “Failure to act, intimidation among claims against Canton police chief and administrator; couple claims no wrongdoing.” In addition, Sports Editor Brian Fees earned second place in Sports Enterprise for his “Where Are They Now?” series that, as athletic events were cancelled due to the pandemic, helped fill the gap by featuring standout athletes from the area’s past. Steve Piatt also earned first place for his “Still Out There with Steve Piatt” column in the Sports/Outdoor Column category.

According to Editor-in-Chief Matt Hicks, awards season always brings a well-deserved spotlight on the work of the newspaper’s staff and contributors, even with the constant challenges of working in the public eye and the additional strain created by the COVID-19 pandemic.

“Bri, Brian, and Steve should be proud of their work, and we are extremely proud of them,” Hicks said.

“Even though this is Bri’s first time receiving awards for her work,” he added, “it’s been a long time coming.”

“On Sunday night at seven o’clock they’d like people to ring bells — church bells, bells at home, whatever we might have — for three minutes to honor all the people that have worked diligently through the COVID pandemic,” said Farley.

A press release sent out prior to the meeting listed these “hometown heroes” as consisting of “health care workers, emergency medical personnel, firefighters (and) police officers,” as well as “employees of grocery stores, pharmacies, utility workers, and other sustaining businesses who have braved the viral elements.”

At the meeting, the mayor expressed his appreciation of this act and noted that it has now become an annual event.

“I think it’s important to recognize these people,” said Farley, “and it’s the second year that this has been done.”

He noted that this declaration came from state officials. The press release indicated that “elected officials across the Commonwealth” are promoting this “statewide expression of gratitude.”

The release went on the point out the significance of the bell, which “has served as an instrument for expressing communal gratitude, camaraderie, and resolve” since the Revolutionary War.

In other news from the meeting, board member Jessica Meyer inquired about outdoor dining options for restaurants in Sayre this summer.

Borough manager David Jarrett explained that restaurants may have to seek permission from the borough, depending on the space available outside their business.

Meyer noted that a business is interested in having two spaces blocked off, as was done once before for outdoor dining.

“They had a really good time in the fall with the outdoor dining option,” said Meyer.

Jarrett said the answer depends on the extent of the request.

ATHENS — In another sign that things are slowly getting back to normal, the Athens Area School District has announced that this year’s high school graduation will be in-person and with the entire Class of 2021 together inside Alumni Stadium.

“Graduation is going to be in person. It’s going to be (Saturday) June 12 at 1 p.m,” Athens Superintendent Craig Stage told the Morning Times this week.

While the graduation will take place on the school’s football field, the number of people attending will still depend on the COVID-19 guidelines put out by the Pennsylvania Department of Education.

“What we are going to do is it’s still going to be a ticketed event. We are going to give students so many tickets,” Stage said. “I see the CDC did change some of the guidelines of wearing a mask outside now, so if the Pennsylvania Department of Education changes that, we will change to match.”

Even with capacity at less than 100 percent, Stage believes the people who want to attend will be able to get in the stadium.

Graduation isn’t the only yearly tradition the Athens Class of 2021 will get to enjoy this year as the school district has come up with a unique setting for prom.

Stage credited the class advisors, teachers and high school principal Corey Mosher with coming up with the idea for the prom inside Alumni Stadium.

The longtime Athens superintendent believes it’s important for the students to be able to celebrate at events like prom.

“Having a prom for seniors, and I think it’s going to be just for seniors, is huge because it’s the one thing they didn’t get last year. These events, while people say you’re there to learn which is absolutely true, you’re also there to experience life and have moments and memories, so I think it’s going to be fantastic for these kids to have these opportunities,” Stage said.

While prom is an important piece to any student’s high school experience, the top priority for Athens school officials was having an in-person graduation with the entire class celebrating together.

“It has been the goal since day one. It’s important,” said Stage on having a “normal” graduation. “These kids, this is the ultimate or penultimate moment for them in their high school education, before they go on to post-secondary school, to the military, to jobs, this is the last opportunity for them to come together as a class before they go off into life ... And they have to be able to do that together, all of them at one time.”