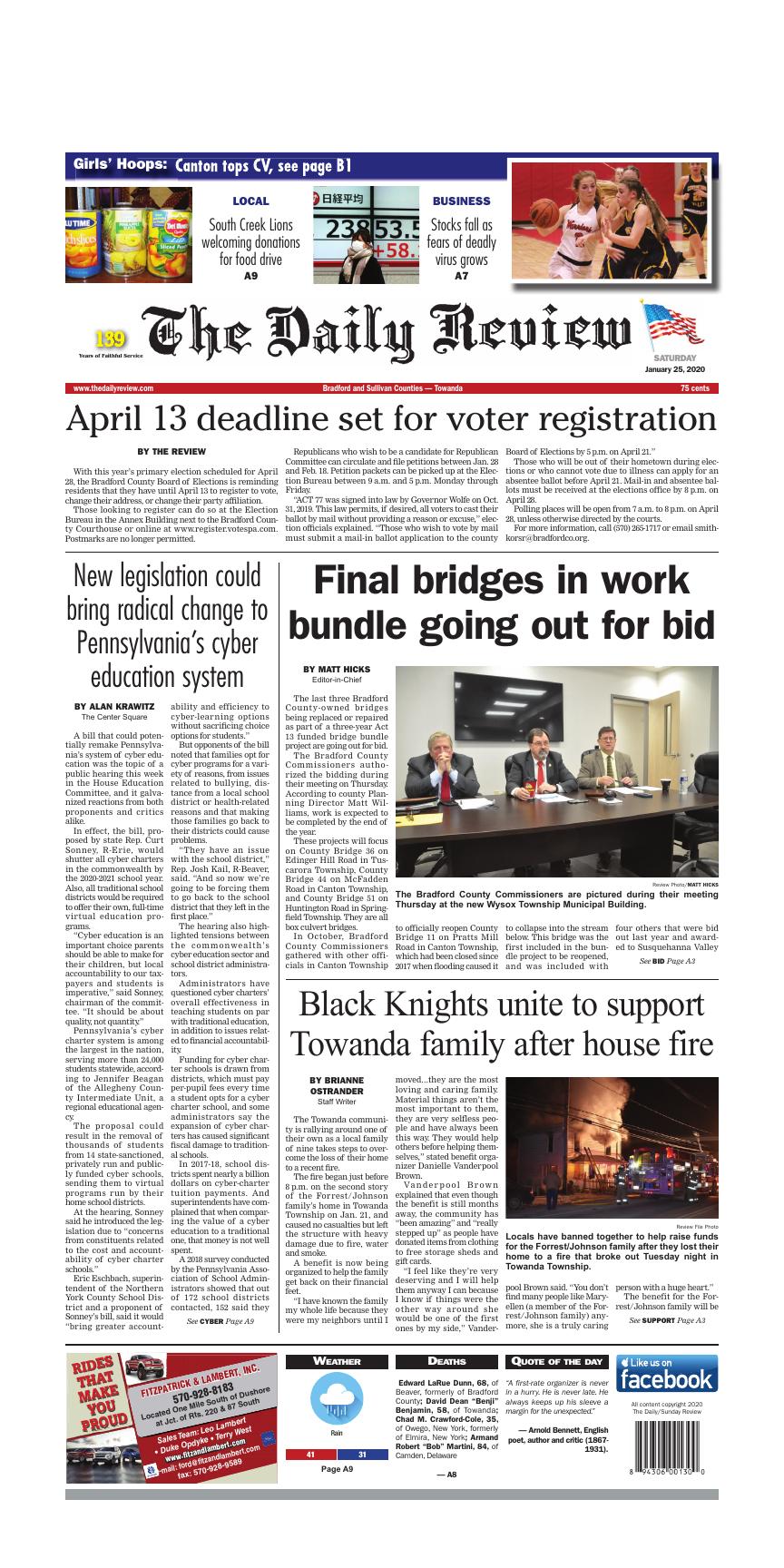 Those who want to register to vote will have until April 13.

With this year’s primary election scheduled for April 28, the Bradford County Board of Elections is reminding residents that they have until April 13 to register to vote, change their address, or change their party affiliation.

Those looking to register can do so at the Election Bureau in the Annex Building next to the Bradford County Courthouse or online at www.register.votespa.com. Postmarks are no longer permitted.

Republicans who wish to be a candidate for Republican Committee can circulate and file petitions between Jan. 28 and Feb. 18. Petition packets can be picked up at the Election Bureau between 9 a.m. and 5 p.m. Monday through Friday.

“ACT 77 was signed into law by Governor Wolfe on Oct. 31, 2019. This law permits, if desired, all voters to cast their ballot by mail without providing a reason or excuse,” election officials explained. “Those who wish to vote by mail must submit a mail-in ballot application to the county Board of Elections by 5 p.m. on April 21.”

Those who will be out of their hometown during elections or who cannot vote due to illness can apply for an absentee ballot before April 21. Mail-in and absentee ballots must be received at the elections office by 8 p.m. on April 28.

Polling places will be open from 7 a.m. to 8 p.m. on April 28, unless otherwise directed by the courts.

The Bradford County Commissioners are pictured during their meeting Thursday at the new Wysox Township Municipal Building.

The last three Bradford County-owned bridges being replaced or repaired as part of a three-year Act 13 funded bridge bundle project are going out for bid.

The Bradford County Commissioners authorized the bidding during their meeting on Thursday. According to county Planning Director Matt Williams, work is expected to be completed by the end of the year.

In October, Bradford County Commissioners gathered with other officials in Canton Township to officially reopen County Bridge 11 on Pratts Mill Road in Canton Township, which had been closed since 2017 when flooding caused it to collapse into the stream below. This bridge was the first included in the bundle project to be reopened, and was included with four others that were bid out last year and awarded to Susquehanna Valley Construction for just under $3 million.

County Bridge 31 on Robinson Road in Terry Township is also now open to traffic, Williams said, while County Bridge 18 on West LeRoy Crossroads Road is a few weeks away from reopening.

“Bridge 14 in Granville and Bridge 39 (on Fisk Road in Wilmot Township), they’re going to start demoing those bridges within the next couple of weeks,” he continued. “They just got final approval from DEP (the Pennsylvania Department of Environmental Protection) to do that.”

“(Susquehanna Valley Construction) has done a terrific job,” Commissioner Doug McLinko said. “And Matt, too, by the way.”

McLinko and Williams provided the example of the Pratts Mill Road bridge with how the county has been able to save money through bundling.

“When Pratts Mill (bridge) went down, the initial estimate we got back from the engineer was $1.1 million or so. We completed that structure for around $720,000,” said Williams. “And we’ve seen actual savings on the construction bid so far.”

Locals have banned together to help raise funds for the Forrest/Johnson family after they lost their home to a fire that broke out Tuesday night in Towanda Township.

The Towanda community is rallying around one of their own as a local family of nine takes steps to overcome the loss of their home to a recent fire.

The fire began just before 8 p.m. on the second story of the Forrest/Johnson family’s home in Towanda Township on Jan. 21, and caused no casualties but left the structure with heavy damage due to fire, water and smoke.

A benefit is now being organized to help the family get back on their financial feet.

“I have known the family my whole life because they were my neighbors until I moved...they are the most loving and caring family. Material things aren’t the most important to them, they are very selfless people and have always been this way. They would help others before helping themselves,” stated benefit organizer Danielle Vanderpool Brown.

Vanderpool Brown explained that even though the benefit is still months away, the community has “been amazing” and “really stepped up” as people have donated items from clothing to free storage sheds and gift cards.

“I feel like they’re very deserving and I will help them anyway I can because I know if things were the other way around she would be one of the first ones by my side,” Vanderpool Brown said. “You don’t find many people like Maryellen (a member of the Forrest/Johnson family) anymore, she is a truly caring person with a huge heart.”

The benefit for the Forrest/Johnson family will be held on March 8 from noon until 6 p.m. at the Towanda Fire Hall.

A dinner of baked ziti, tossed salad, bread and a choice of dessert will be available for $7.50 per person or $30 for a family of five or more with children age five and under free. A 50/50 raffle, silent auction and baked goods sale will also be held.

A bill that could potentially remake Pennsylvania’s system of cyber education was the topic of a public hearing this week in the House Education Committee, and it galvanized reactions from both proponents and critics alike.

In effect, the bill, proposed by state Rep. Curt Sonney, R-Erie, would shutter all cyber charters in the commonwealth by the 2020-2021 school year. Also, all traditional school districts would be required to offer their own, full-time virtual education programs.

“Cyber education is an important choice parents should be able to make for their children, but local accountability to our taxpayers and students is imperative,” said Sonney, chairman of the committee. “It should be about quality, not quantity.”

Pennsylvania’s cyber charter system is among the largest in the nation, serving more than 24,000 students statewide, according to Jennifer Beagan of the Allegheny County Intermediate Unit, a regional educational agency.

The proposal could result in the removal of thousands of students from 14 state-sanctioned, privately run and publicly funded cyber schools, sending them to virtual programs run by their home school districts.

At the hearing, Sonney said he introduced the legislation due to “concerns from constituents related to the cost and accountability of cyber charter schools.”

Eric Eschbach, superintendent of the Northern York County School District and a proponent of Sonney’s bill, said it would “bring greater accountability and efficiency to cyber-learning options without sacrificing choice options for students.”

But opponents of the bill noted that families opt for cyber programs for a variety of reasons, from issues related to bullying, distance from a local school district or health-related reasons and that making those families go back to their districts could cause problems.

Administrators have questioned cyber charters’ overall effectiveness in teaching students on par with traditional education, in addition to issues related to financial accountability.

In 2017-18, school districts spent nearly a billion dollars on cyber-charter tuition payments. And superintendents have complained that when comparing the value of a cyber education to a traditional one, that money is not well spent.

A 2018 survey conducted by the Pennsylvania Association of School Administrators showed that out of 172 school districts contacted, 152 said they were running a local cyber school.

John Chandler, CEO of PA Virtual Charter School, implored educators and partners at the meeting to embrace a spirit of cooperation.

“We can get much farther working together than fighting each other,” he said. He asked that cyber charters be allowed to “share in the processes” that traditional schools participate in.

Chandler also said he was opposed to the bill since it would “eliminate independently-run, statewide cyber schools from an already short list of publicly funded options.”

Hayden added that he welcomed “meaningful discussions on funding, but they must be transparent, fair, based on fact not misperceptions.”

State Rep. Josh Kail, R-Beaver, said that although cyber funding reform is needed, he questioned the bill’s potential to create a monopoly on cyber education for school districts. He also expressed concerns about limiting options left to students who would be forced to leave cyber charter schools for district-based virtual programs.

“I fail to see how taking choices away from parents in this instance is a good idea,” he said. 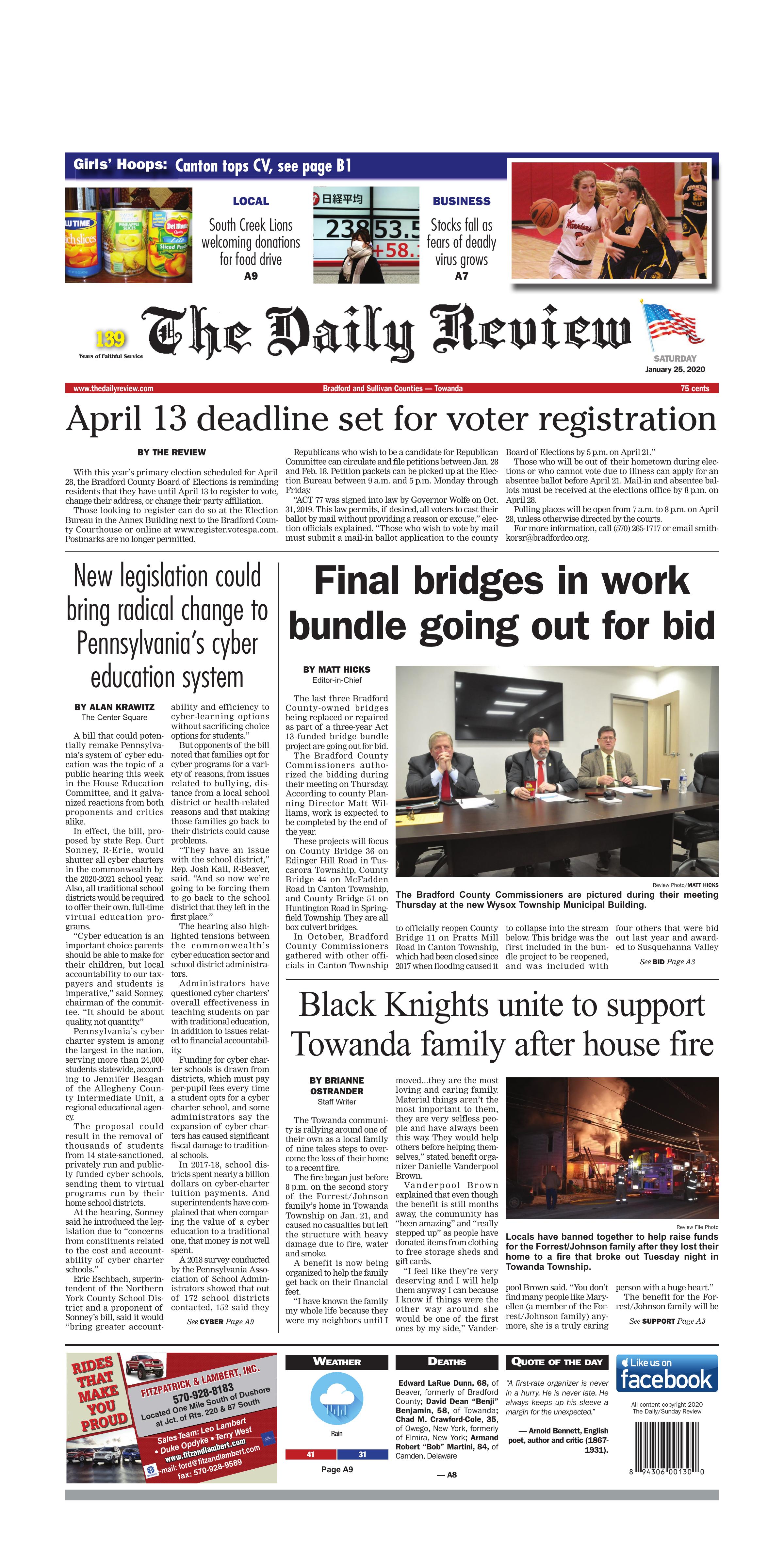