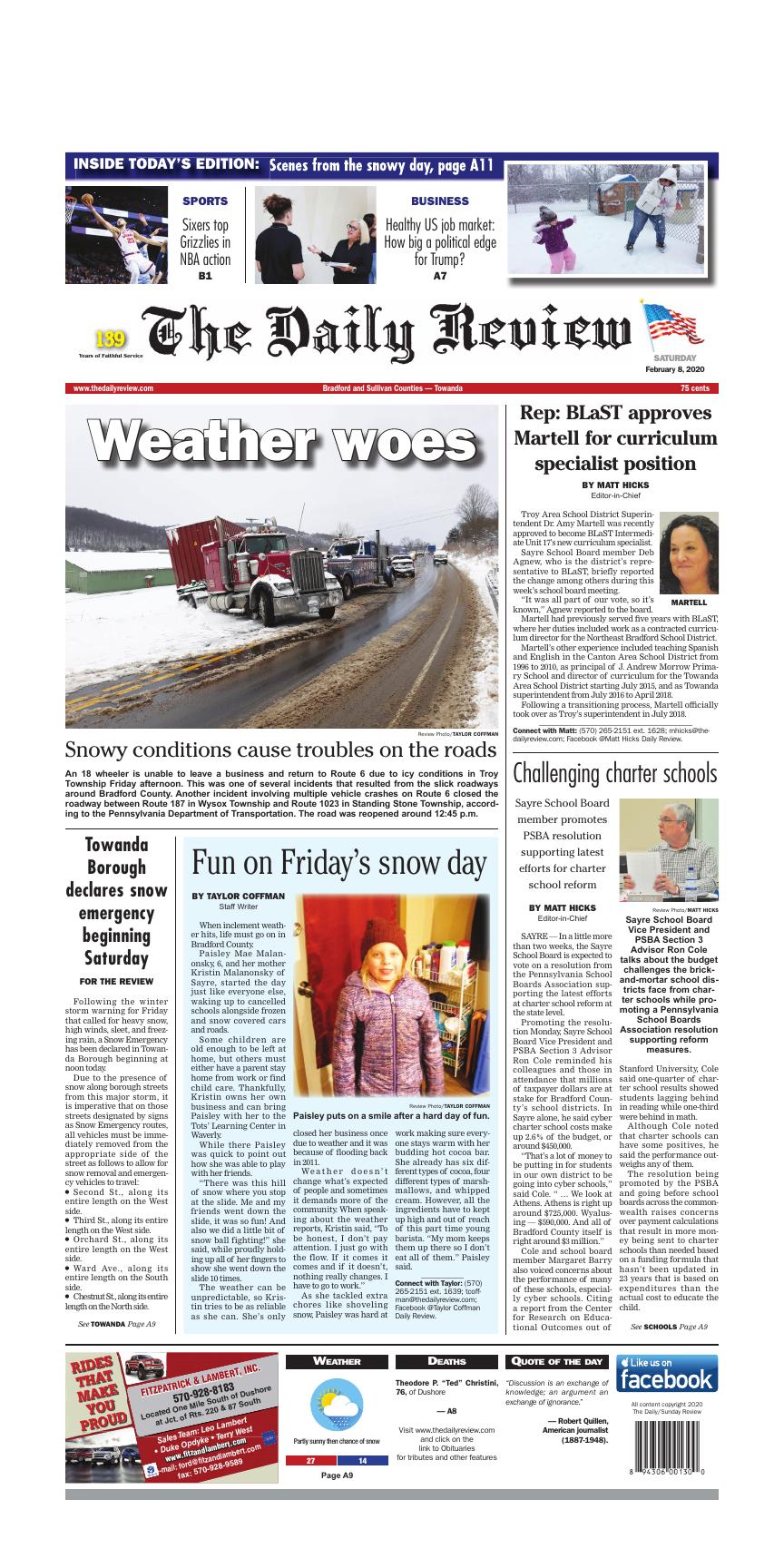 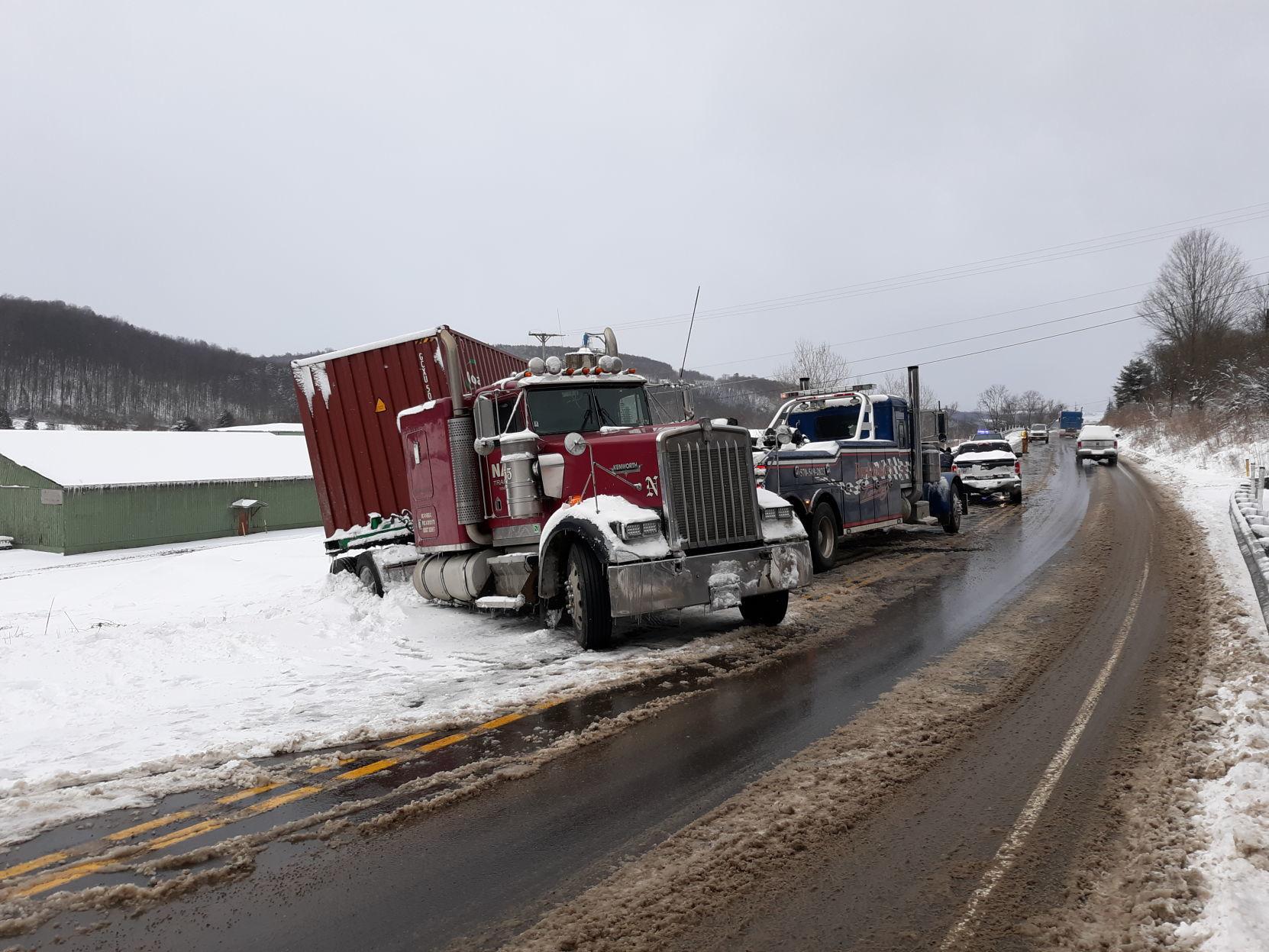 An 18 wheeler is unable to leave a business and return to Route 6 due to icy conditions in Troy Township Friday afternoon. This was one of several incidents that resulted from the slick roadways around Bradford County. Another incident involving multiple vehicle crashes on Route 6 closed the roadway between Route 187 in Wysox Township and Route 1023 in Standing Stone Township, according to the Pennsylvania Department of Transportation. The road was reopened around 12:45 p.m.

Paisley puts on a smile after a hard day of fun.

When inclement weather hits, life must go on in Bradford County.

Paisley Mae Malanonsky, 6, and her mother Kristin Malanonsky of Sayre, started the day just like everyone else, waking up to cancelled schools alongside frozen and snow covered cars and roads.

Some children are old enough to be left at home, but others must either have a parent stay home from work or find child care. Thankfully, Kristin owns her own business and can bring Paisley with her to the Tots’ Learning Center in Waverly.

While there Paisley was quick to point out how she was able to play with her friends.

“There was this hill of snow where you stop at the slide. Me and my friends went down the slide, it was so fun! And also we did a little bit of snow ball fighting!” she said, while proudly holding up all of her fingers to show she went down the slide 10 times.

The weather can be unpredictable, so Kristin tries to be as reliable as she can. She’s only closed her business once due to weather and it was because of flooding back in 2011.

Weather doesn’t change what’s expected of people and sometimes it demands more of the community. When speaking about the weather reports, Kristin said, “To be honest, I don’t pay attention. I just go with the flow. If it comes it comes and if it doesn’t, nothing really changes. I have to go to work.”

As she tackled extra chores like shoveling snow, Paisley was hard at work making sure everyone stays warm with her budding hot cocoa bar. She already has six different types of cocoa, four different types of marshmallows, and whipped cream. However, all the ingredients have to kept up high and out of reach of this part time young barista. “My mom keeps them up there so I don’t eat all of them.” Paisley said.

Sayre School Board member Deb Agnew, who is the district’s representative to BLaST, briefly reported the change among others during this week’s school board meeting.

“It was all part of our vote, so it’s known,” Agnew reported to the board.

Martell had previously served five years with BLaST, where her duties included work as a contracted curriculum director for the Northeast Bradford School District.

Martell’s other experience included teaching Spanish and English in the Canton Area School District from 1996 to 2010, as principal of J. Andrew Morrow Primary School and director of curriculum for the Towanda Area School District starting July 2015, and as Towanda superintendent from July 2016 to April 2018.

Following a transitioning process, Martell officially took over as Troy’s superintendent in July 2018.

SAYRE — In a little more than two weeks, the Sayre School Board is expected to vote on a resolution from the Pennsylvania School Boards Association supporting the latest efforts at charter school reform at the state level.

Promoting the resolution Monday, Sayre School Board Vice President and PSBA Section 3 Advisor Ron Cole reminded his colleagues and those in attendance that millions of taxpayer dollars are at stake for Bradford County’s school districts. In Sayre alone, he said cyber charter school costs make up 2.6% of the budget, or around $450,000.

Cole and school board member Margaret Barry also voiced concerns about the performance of many of these schools, especially cyber schools. Citing a report from the Center for Research on Educational Outcomes out of Stanford University, Cole said one-quarter of charter school results showed students lagging behind in reading while one-third were behind in math.

Although Cole noted that charter schools can have some positives, he said the performance outweighs any of them.

The resolution being promoted by the PSBA and going before school boards across the commonwealth raises concerns over payment calculations that result in more money being sent to charter schools than needed based on a funding formula that hasn’t been updated in 23 years that is based on expenditures than the actual cost to educate the child.

“Because the tuition rate calculations are based on the school district’s expenses, they create wide discrepancies in the amount of tuition paid by different districts for the same charter school education and result in drastic overpayments to charter schools; and these discrepancies in tuition rates for regular education students can vary by almost $13,000 per student and by $39,000 for special education students,” the resolution stated.

The PSBA also noted that the costs of charter schools continue to grow each year for school districts, and the need for reform is urgent.

The resolutions added, “School districts are struggling to keep up with growing charter costs and are forced to raise taxes and cut staffing, programs and services for their own students in order to pay millions of dollars to charter schools.”

As part of his 2020 budget proposal, Gov. Tom Wolf wants to apply the same formula for charter schools as is used for school districts, saying it would save these districts $280 million in charter school tuition.

Meanwhile, the Pennsylvania Coalition of Public Charter Schools is calling on people to voice their opposition to the governor’s plan, saying in a tweet that the $280 million cut “is discriminatory and treats (charter school students) like second-class citizens.”

“Now, more than ever, we need parents to share the story of how charter schools have changed their lives (and for parents with students on charter waitlists, we need you to share how your school district is failing your child),” the organization stated on its website.

“Now is the time to take action and make your voice heard,” the statement continued. “Gov. Wolf and his allies in Harrisburg would like nothing more than to strip families of their right to choose a public charter school for their children.”

Meanwhile, Cole said they will be doing their own outreach to state Sen. Gene Yaw (R-23) and state Rep. Tina Pickett (R-110) to look at the issue.

“We hope we can get something going down there to get some reform,” said Cole.

The resolution is expected to go before the Sayre School Board during its Feb. 24 meeting.

Following the winter storm warning for Friday that called for heavy snow, high winds, sleet, and freezing rain, a Snow Emergency has been declared in Towanda Borough beginning at noon today.

Due to the presence of snow along borough streets from this major storm, it is imperative that on those streets designated by signs as Snow Emergency routes, all vehicles must be immediately removed from the appropriate side of the street as follows to allow for snow removal and emergency vehicles to travel:

Once these sides are plowed, vehicles may move back to allow the other side to be plowed.

Additionally, all owners of vehicles in the borough are asked to immediately remove their vehicles from the street if off-street parking space is available.

This snow emergency will remain in effect until the streets and parking areas are clear.

Vehicles left in violation of this proclamation and ordinance will be subject to fines and/or towing with costs.

Borough residents are also reminded that snow may not be placed or dumped into the street and that snow must be removed from sidewalks within 24 hours after the snowfall has ended. 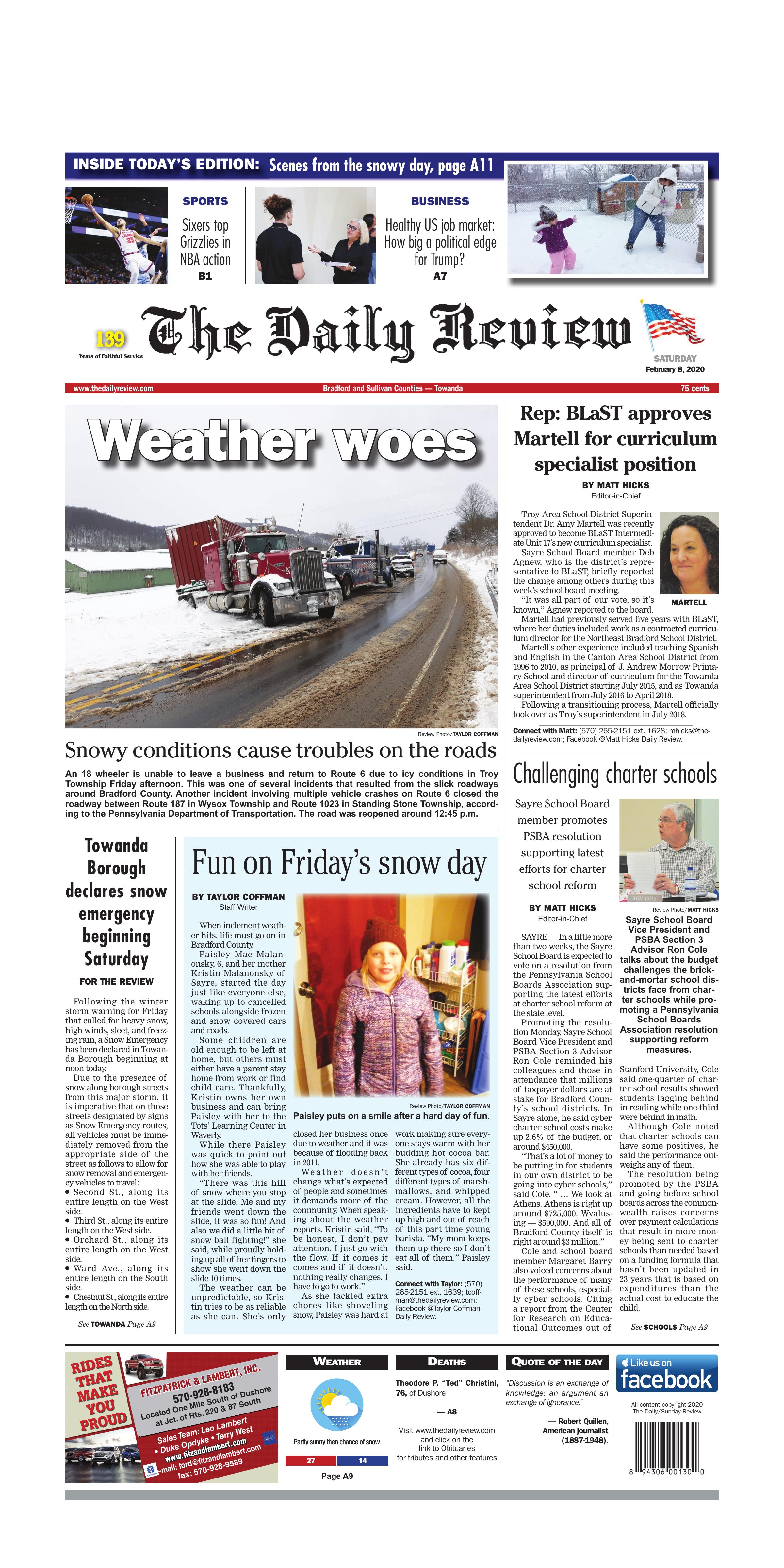