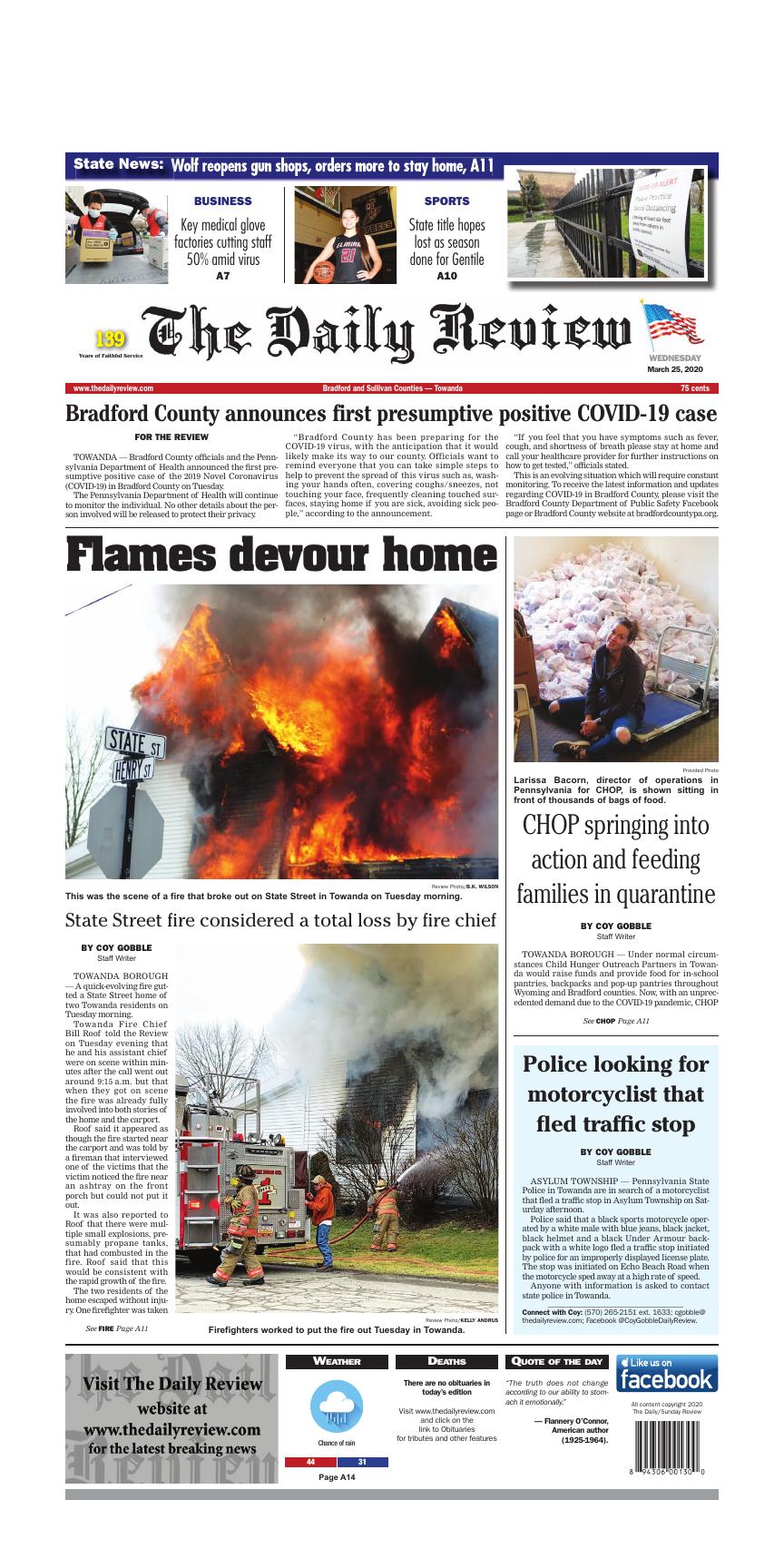 Towanda Fire Chief Bill Roof told the Review on Tuesday evening that he and his assistant chief were on scene within minutes after the call went out around 9:15 a.m. but that when they got on scene the fire was already fully involved into both stories of the home and the carport.

Roof said it appeared as though the fire started near the carport and was told by a fireman that interviewed one of the victims that the victim noticed the fire near an ashtray on the front porch but could not put it out.

It was also reported to Roof that there were multiple small explosions, presumably propane tanks, that had combusted in the fire. Roof said that this would be consistent with the rapid growth of the fire.

The two residents of the home escaped without injury. One firefighter was taken to the hospital for chest pains during the fire. Roof said that he was now home and safe.

Roof also remarked that with four departments — Towanda, North Towanda, Wysox and Athens Borough — responding, that he and his team took extra precautions to disinfect and minimize the risk of transference of the COVID-19 virus.

“We can’t risk losing a whole group of firefighters here,” he said.

Wyalusing and Troy fire departments were also on standby.

Larissa Bacorn, director of operations in Pennsylvania for CHOP, is shown sitting in front of thousands of bags of food.

TOWANDA BOROUGH — Under normal circumstances Child Hunger Outreach Partners in Towanda would raise funds and provide food for in-school pantries, backpacks and pop-up pantries throughout Wyoming and Bradford counties. Now, with an unprecedented demand due to the COVID-19 pandemic, CHOP is working harder than ever to provide food to families that need it. The non-profit has packed tens of thousands of bags of food per week that are being distributed by schools and churches in the area.

“We wanted to spring into action and provide food to the students while in this outage because first and foremost, it’s our core mission to create an entire generation that doesn’t know hunger,” said Executive Director Danielle Ruhf. “This means during school, during summer, and during emergencies. Secondly, the psychology of food insecurity spirals into a host of other issues, and we have worked very hard to begin to eliminate that sidepiece to the crisis of childhood hunger.”

With normal staff this type of production would not be possible, but thanks to an outpouring amount of volunteers and support from the community the group is feeding thousands daily.

“We have cried so many happy tears during this period,” Ruhf continued. “The community has rallied around us in unfathomable ways and we were able to ramp up from 1,700 bags a week to 18,000 bags a week quite seamlessly. We had such an abundance of volunteers and outpouring of support, and we know we couldn’t have accomplished this task otherwise.”

While the volunteer support has allowed the organization to ramp up their activities, more quarantines or an elongated version of the one currently being experienced could pose financial trouble for keeping their activities going.

“Our biggest issues at this time are how to continue to meet the needs of the community while still practicing responsible social distancing, and funding,” Ruhf continued. “For example, each bag of food (which is enough for one student for two to three days) costs us $1. Eighteen thousand bags in one week was a massive hit on our budget and the longer this draws out, the faster we will see our account dwindle.”

“This is obviously something nobody would have planned or budgeted for, but we just refuse to say no to these students.”

If anyone would like to donate to the organization one can do so at https://childhungeroutreachpartners.networkforgood.com.

ASYLUM TOWNSHIP — Pennsylvania State Police in Towanda are in search of a motorcyclist that fled a traffic stop in Asylum Township on Saturday afternoon.

Police said that a black sports motorcycle operated by a white male with blue jeans, black jacket, black helmet and a black Under Armour backpack with a white logo fled a traffic stop initiated by police for an improperly displayed license plate. The stop was initiated on Echo Beach Road when the motorcycle sped away at a high rate of speed.

Anyone with information is asked to contact state police in Towanda. 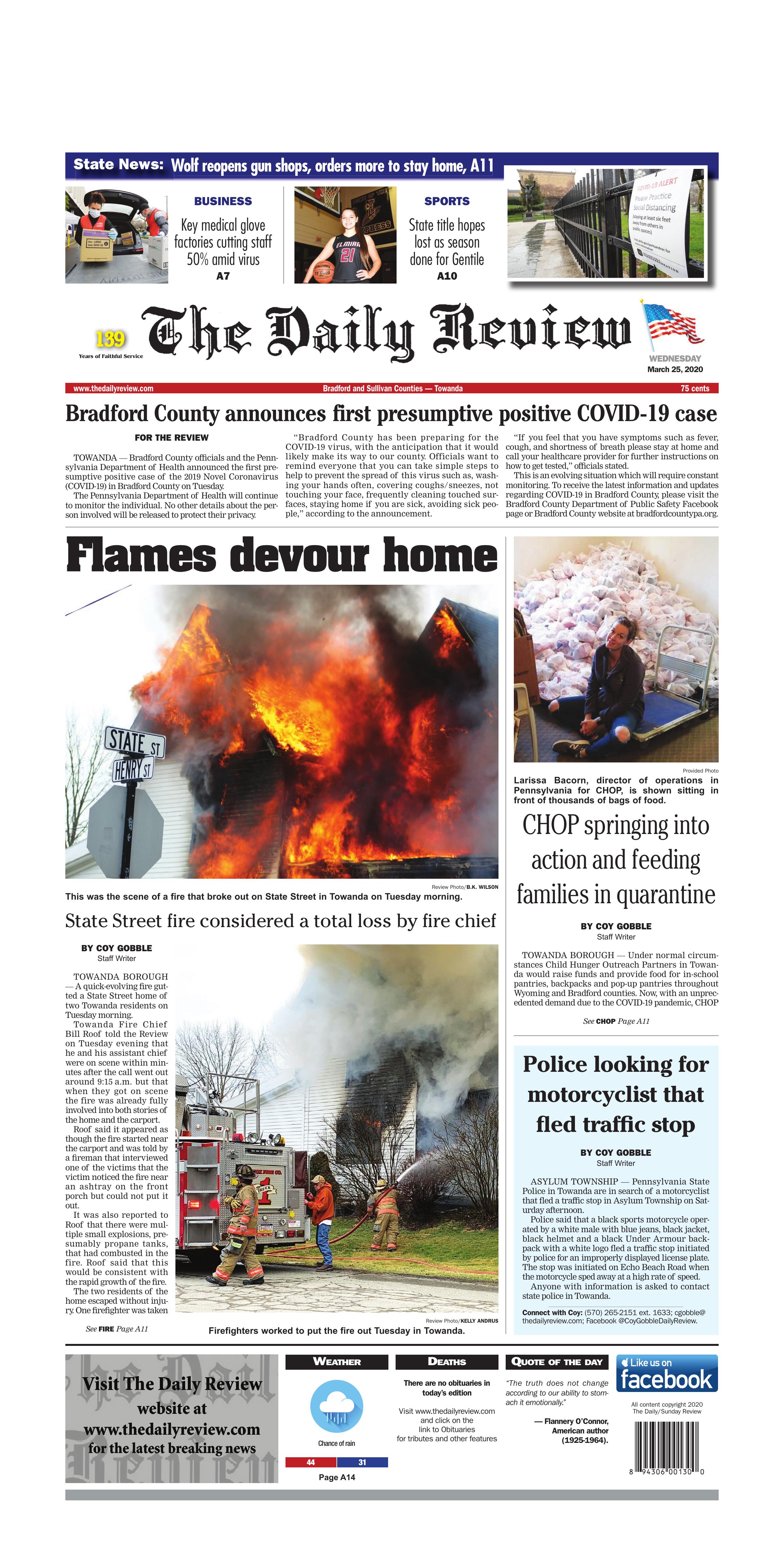