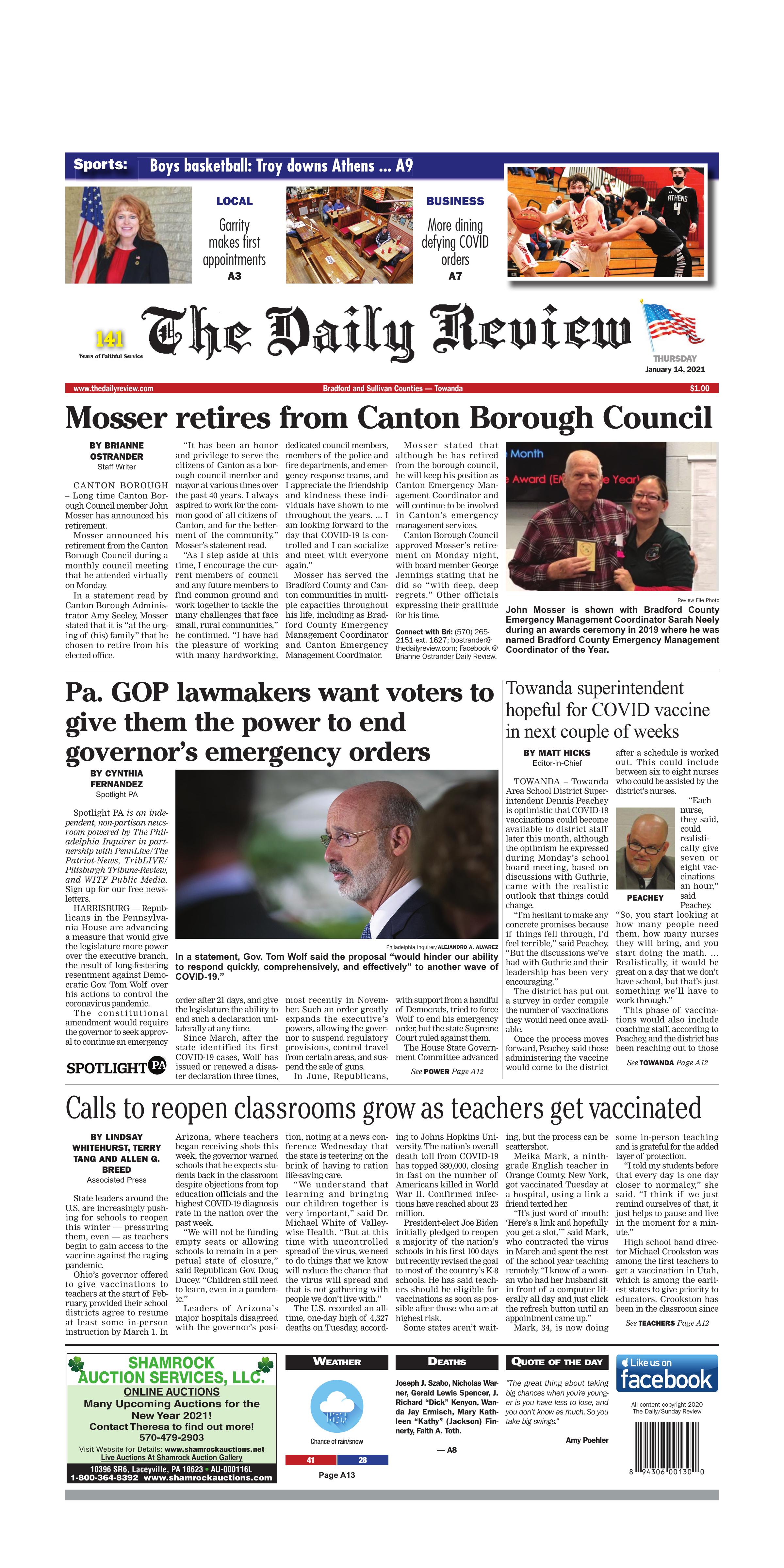 Mosser announced his retirement from the Canton Borough Council during a monthly council meeting that he attended virtually on Monday.

In a statement read by Canton Borough Administrator Amy Seeley, Mosser stated that it is “at the urging of (his) family” that he chosen to retire from his elected office.

“It has been an honor and privilege to serve the citizens of Canton as a borough council member and mayor at various times over the past 40 years. I always aspired to work for the common good of all citizens of Canton, and for the betterment of the community,” Mosser’s statement read.

“As I step aside at this time, I encourage the current members of council and any future members to find common ground and work together to tackle the many challenges that face small, rural communities,” he continued. “I have had the pleasure of working with many hardworking, dedicated council members, members of the police and fire departments, and emergency response teams, and I appreciate the friendship and kindness these individuals have shown to me throughout the years. ... I am looking forward to the day that COVID-19 is controlled and I can socialize and meet with everyone again.”

Mosser stated that although he has retired from the borough council, he will keep his position as Canton Emergency Management Coordinator and will continue to be involved in Canton’s emergency management services.

Canton Borough Council approved Mosser’s retirement on Monday night, with board member George Jennings stating that he did so “with deep, deep regrets.” Other officials expressing their gratitude for his time.

Local
Pa. GOP lawmakers want voters to give them the power to end governor’s emergency orders
Philadelphia Inquirer/ALEJANDRO A. ALVAREZ

In a statement, Gov. Tom Wolf said the proposal “would hinder our ability to respond quickly, comprehensively, and effectively” to another wave of COVID-19.”

HARRISBURG — Republicans in the Pennsylvania House are advancing a measure that would give the legislature more power over the executive branch, the result of long-festering resentment against Democratic Gov. Tom Wolf over his actions to control the coronavirus pandemic.

The constitutional amendment would require the governor to seek approval to continue an emergency order after 21 days, and give the legislature the ability to end such a declaration unilaterally at any time.

Since March, after the state identified its first COVID-19 cases, Wolf has issued or renewed a disaster declaration three times, most recently in November. Such an order greatly expands the executive’s powers, allowing the governor to suspend regulatory provisions, control travel from certain areas, and suspend the sale of guns.

In June, Republicans, with support from a handful of Democrats, tried to force Wolf to end his emergency order, but the state Supreme Court ruled against them.

The House State Government Committee advanced the proposal — written by the committee’s chair, Rep. Seth Grove (R., York) — along party lines Wednesday. The question is on track to go before voters this May during a low turnout primary.

“If the General Assembly, a co-equal branch of government, does not believe that the governor is acting properly, then the General Assembly should have a right to override that governor’s disaster emergency order,” said Rep. Russ Diamond (R., Lebanon), a frequent critic of the Wolf administration’s universal mask-wearing order.

In a statement, Wolf said the proposal “would hinder our ability to respond quickly, comprehensively, and effectively” to another wave of COVID-19.” Currently, a governor can order a 90-day disaster declaration and extend it as needed.

“Premature termination or non-renewal of the current COVID-19 disaster emergency will be disastrous for the commonwealth,” Wolf said. “It will undo all of the progress that has been made in combating the spread of COVID-19 and saving the lives of Pennsylvanians, and put the commonwealth in a poor position to address another resurgence.”

In the spring, the Wolf administration closed certain businesses to slow the spread of the virus, a move Republicans fought to overrule repeatedly. After seeing a decline in cases through the summer, Pennsylvania saw a strong surge in the fall, with daily cases peaking above 12,000.

In response, Wolf and Health Secretary Rachel Levine temporarily suspended indoor dining and school sports after the Thanksgiving holiday. That power to close businesses and restrict their actions does not come from the disaster declaration, the administration has argued, but from a seperate part of state law.

“Ending the disaster declaration would not reopen anything. It just wouldn’t,” Wolf said in June. “And anybody who says differently is wrong.”

The amendment advanced Wednesday would also enshrine in the constitution anti-discrimination protections for Pennsylvanians based on their race and ethnicity. It does not provide protections for people based on gender or sexual identity, a long-standing priority for Democrats and some Republicans.

“That specific amendment was added in the Senate,” Grove said when asked why his measure does not include LGBTQ protections. “I do not know why they did or did not add them at that time.”

Unlike a bill, constitutional amendments don’t go to the governor for approval or veto. Instead, they have to pass the legislature twice in consecutive sessions before going to voters for consideration.

Wolf said Wednesday the proposal “demonstrates that we need to rethink the very way that our constitution is amended.”

“No political party should control when and how our governing charter is changed,” he said.

The full House will return to session Jan. 25. Leadership did not respond to requests for comment on when the measure may be called up for a vote. 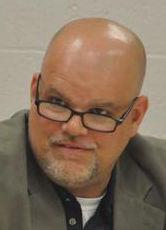 TOWANDA – Towanda Area School District Superintendent Dennis Peachey is optimistic that COVID-19 vaccinations could become available to district staff later this month, although the optimism he expressed during Monday’s school board meeting, based on discussions with Guthrie, came with the realistic outlook that things could change.

“I’m hesitant to make any concrete promises because if things fell through, I’d feel terrible,” said Peachey. “But the discussions we’ve had with Guthrie and their leadership has been very encouraging.”

The district has put out a survey in order compile the number of vaccinations they would need once available.

Once the process moves forward, Peachey said those administering the vaccine would come to the district after a schedule is worked out. This could include between six to eight nurses who could be assisted by the district’s nurses.

“Each nurse, they said, could realistically give seven or eight vaccinations an hour,” said Peachey. “So, you start looking at how many people need them, how many nurses they will bring, and you start doing the math. … Realistically, it would be great on a day that we don’t have school, but that’s just something we’ll have to work through.”

This phase of vaccinations would also include coaching staff, according to Peachey, and the district has been reaching out to those who aren’t on the faculty emailing lists.

“This is something that we’re going to leave up to each individual person to make that decision,” he noted.

According to the Pennsylvania Department of Health, the distribution of COVID-19 vaccines are currently in Phase 1A, which includes long-term care facilities and health care personnel. Schools will be included in the next phase – Phase 1B.