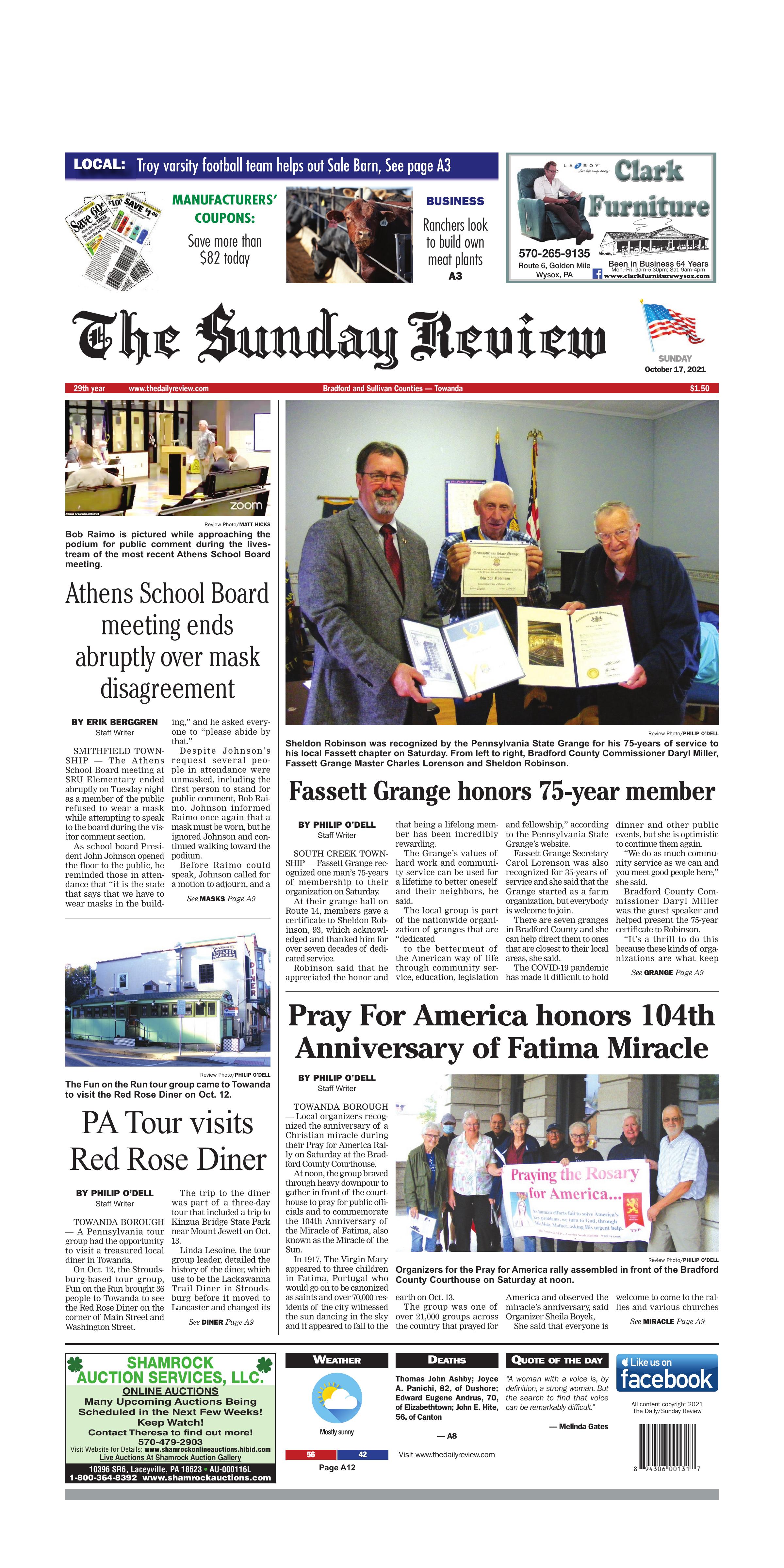 Sheldon Robinson was recognized by the Pennsylvania State Grange for his 75-years of service to his local Fassett chapter on Saturday. From left to right, Bradford County Commissioner Daryl Miller, Fassett Grange Master Charles Lorenson and Sheldon Robinson.

SOUTH CREEK TOWNSHIP — Fassett Grange recognized one man’s 75-years of membership to their organization on Saturday.

At their grange hall on Route 14, members gave a certificate to Sheldon Robinson, 93, which acknowledged and thanked him for over seven decades of dedicated service.

Robinson said that he appreciated the honor and that being a lifelong member has been incredibly rewarding.

The Grange’s values of hard work and community service can be used for a lifetime to better oneself and their neighbors, he said.

to the betterment of the American way of life through community service, education, legislation and fellowship,” according to the Pennsylvania State Grange’s website.

Fassett Grange Secretary Carol Lorenson was also recognized for 35-years of service and she said that the Grange started as a farm organization, but everybody is welcome to join.

There are seven granges in Bradford County and she can help direct them to ones that are closest to their local areas, she said.

The COVID-19 pandemic has made it difficult to hold dinner and other public events, but she is optimistic to continue them again.

“We do as much community service as we can and you meet good people here,” she said.

“It’s a thrill to do this because these kinds of organizations are what keep communities together,” he said. “It’s important for the local community, all of the municipalities and the entire county.”

The event also recognized multiple members for their years of service to the organization that included: Vern Robinson for 55 years, Echo McGovern for 50 years, Valerie Clark for 35 years, Lynn Congdon for 35 years, Fassett Grange Master Charles Lorenson for 35 years, Suzanne Niver for 30 years, Herschel Burt for 30 years and Marjorie Pellor for 15 years.

Organizers for the Pray for America rally assembled in front of the Bradford County Courthouse on Saturday at noon.

TOWANDA BOROUGH — Local organizers recognized the anniversary of a Christian miracle during their Pray for America Rally on Saturday at the Bradford County Courthouse.

At noon, the group braved through heavy downpour to gather in front of the courthouse to pray for public officials and to commemorate the 104th Anniversary of the Miracle of Fatima, also known as the Miracle of the Sun.

In 1917, The Virgin Mary appeared to three children in Fatima, Portugal who would go on to be canonized as saints and over 70,000 residents of the city witnessed the sun dancing in the sky and it appeared to fall to the earth on Oct. 13.

The group was one of over 21,000 groups across the country that prayed for America and observed the miracle’s anniversary, said Organizer Sheila Boyek,

She said that everyone is welcome to come to the rallies and various churches have attended in the past.

The rally prays for “the millions of Americans that faithfully work as public servants in local, state, and national government positions, from police officers to those in political office,” according to The National Day of Prayer’s website.

Bob Raimo is pictured while approaching the podium for public comment during the livestream of the most recent Athens School Board meeting.

SMITHFIELD TOWNSHIP — The Athens School Board meeting at SRU Elementary ended abruptly on Tuesday night as a member of the public refused to wear a mask while attempting to speak to the board during the visitor comment section.

As school board President John Johnson opened the floor to the public, he reminded those in attendance that “it is the state that says that we have to wear masks in the building,” and he asked everyone to “please abide by that.”

Despite Johnson’s request several people in attendance were unmasked, including the first person to stand for public comment, Bob Raimo. Johnson informed Raimo once again that a mask must be worn, but he ignored Johnson and continued walking toward the podium.

Before Raimo could speak, Johnson called for a motion to adjourn, and a second, at which point the board began packing up and exiting the room.

“Really?” Raimo said. “You know, I have photos of you guys wearing your masks improperly. Look at Mr. Barrett (Solicitor Pat Barrett).”

“I think the people who speak should get a little bit more respect,” Raimo continued. If you’re going to walk out, I think that’s pretty sad.”

As they were exiting, one school board member said they would listen to him if he wore a mask.

Although Raimo said he wasn’t there to go against the school board, he added, “but what you are doing is wrong. You’re not giving the parents the opportunity and the respect that they deserve. They pay your salary and they elect you, and this is what you’re gonna do?”

Raimo is also the president of the Bradford County Special Projects Group, which has hosted events featuring Eric Winter from the Prince Law Offices. Winter has argued that the school mask mandates “are overwhelmingly illegal” and wouldn’t hold up in court like other COVID-19-related mandates he’s challenged.

After the meeting Johnson said that he and the board stand by the statement that they put out during their Sept. 14 meeting, which stated that the board and the district will not be taking any action against the state’s mandates at this time.

“We just need people to understand that this is not our rule,” Johnson said. “We cannot pick and choose which rules we want to follow or not follow ... we may or may not agree with a rule, but we have to follow them.”

The September statement also recommended that residents take their concerns to their local state representatives, and Johnson himself said he has been contacting state Rep. Tina Pickett (R-110) to have his voice heard on the matter.

Johnson ended by saying that the most important factor for the board and the district continues to be the education of the students.

“We just need to educate our students,” said Johnson, “and there’s all kinds of other stuff going on that’s distracting us from that.”

During the Tuesday’s meeting, fourth grade teacher Richard Macik gave a presentation on the new touch screen digital display boards that are now standard in every AASD classroom.

Macik explained that the digital boards have their own independent operating system, but that he can also screen cast from his laptop or any other digital device.

Much more than a replacement for white boards and projectors, Macik demonstrated how the digital boards also allow students to take turns playing interactive, educational games.

According to Athens Superintendent Craig Stage, these new digital boards are now in every classroom from kindergarten to 12th grade.

The Fun on the Run tour group came to Towanda to visit the Red Rose Diner on Oct. 12.

TOWANDA BOROUGH — A Pennsylvania tour group had the opportunity to visit a treasured local diner in Towanda.

On Oct. 12, the Stroudsburg-based tour group, Fun on the Run brought 36 people to Towanda to see the Red Rose Diner on the corner of Main Street and Washington Street.

The trip to the diner was part of a three-day tour that included a trip to Kinzua Bridge State Park near Mount Jewett on Oct. 13.

Linda Lesoine, the tour group leader, detailed the history of the diner, which use to be the Lackawanna Trail Diner in Stroudsburg before it moved to Lancaster and changed its name there and eventually moved to Towanda.

“I started doing mystery tours two years ago before the COVID-19 pandemic hit,” she said. “People on the trip have no idea where they are going and they trust me to take them to see different areas that they wouldn’t normally see.”

Nostalgia is a big part of the tour guide experience and people are served Cracker Jacks on the bus and old-time candy to take them back in time for a bit, she said.

“I knew a lot of people would remember the diner,” she said. “It was nice and sentimental to see it and my husband use to eat there when it was in Stroudsburg.”

It was the first time that participants had seen the diner in Towanda and they had the opportunity to eat inside and take photos, she said.

Papers with information about the diner’s history and move to Towanda were given out to excited participants.

“They couldn’t wait to get back home and show their friends that also remember the diner,” she said.

Click and hold your mouse button on the page to select the area you wish to save or print. You can click and drag the clipping box to move it or click and drag in the bottom right corner to resize it. When you're happy with your selection, click the checkmark icon next to the clipping area to continue.