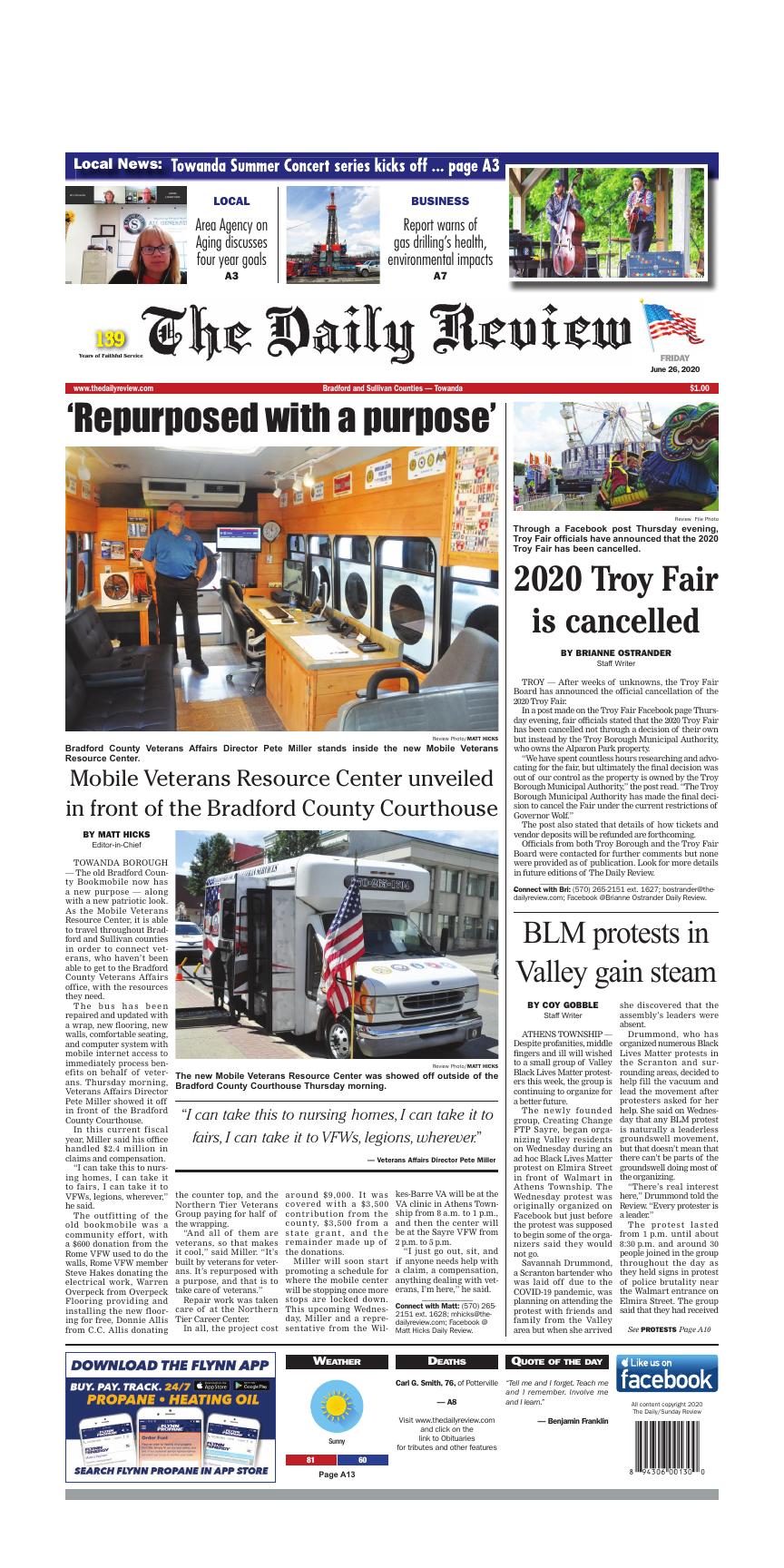 The new Mobile Veterans Resource Center was showed off outside of the Bradford County Courthouse Thursday morning.

TOWANDA BOROUGH — The old Bradford County Bookmobile now has a new purpose — along with a new patriotic look. As the Mobile Veterans Resource Center, it is able to travel throughout Bradford and Sullivan counties in order to connect veterans, who haven’t been able to get to the Bradford County Veterans Affairs office, with the resources they need.

The bus has been repaired and updated with a wrap, new flooring, new walls, comfortable seating, and computer system with mobile internet access to immediately process benefits on behalf of veterans. Thursday morning, Veterans Affairs Director Pete Miller showed it off in front of the Bradford County Courthouse.

In this current fiscal year, Miller said his office handled $2.4 million in claims and compensation.

The outfitting of the old bookmobile was a community effort, with a $600 donation from the Rome VFW used to do the walls, Rome VFW member Steve Hakes donating the electrical work, Warren Overpeck from Overpeck Flooring providing and installing the new flooring for free, Donnie Allis from C.C. Allis donating the counter top, and the Northern Tier Veterans Group paying for half of the wrapping.

“And all of them are veterans, so that makes it cool,” said Miller. “It’s built by veterans for veterans. It’s repurposed with a purpose, and that is to take care of veterans.”

Repair work was taken care of at the Northern Tier Career Center.

Miller will soon start promoting a schedule for where the mobile center will be stopping once more stops are locked down. This upcoming Wednesday, Miller and a representative from the Wilkes-Barre VA will be at the VA clinic in Athens Township from 8 a.m. to 1 p.m., and then the center will be at the Sayre VFW from 2 p.m. to 5 p.m.

“I just go out, sit, and if anyone needs help with a claim, a compensation, anything dealing with veterans, I’m here,” he said.

Through a Facebook post Thursday evening, Troy Fair officials have announced that the 2020 Troy Fair has been cancelled.

TROY — After weeks of unknowns, the Troy Fair Board has announced the official cancellation of the 2020 Troy Fair.

In a post made on the Troy Fair Facebook page Thursday evening, fair officials stated that the 2020 Troy Fair has been cancelled not through a decision of their own but instead by the Troy Borough Municipal Authority, who owns the Alparon Park property.

The post also stated that details of how tickets and vendor deposits will be refunded are forthcoming.

Officials from both Troy Borough and the Troy Fair Board were contacted for further comments but none were provided as of publication. Look for more details in future editions of The Daily Review.

ATHENS TOWNSHIP — Despite profanities, middle fingers and ill will wished to a small group of Valley Black Lives Matter protesters this week, the group is continuing to organize for a better future.

The newly founded group, Creating Change FTP Sayre, began organizing Valley residents on Wednesday during an ad hoc Black Lives Matter protest on Elmira Street in front of Walmart in Athens Township. The Wednesday protest was originally organized on Facebook but just before the protest was supposed to begin some of the organizers said they would not go.

Savannah Drummond, a Scranton bartender who was laid off due to the COVID-19 pandemic, was planning on attending the protest with friends and family from the Valley area but when she arrived she discovered that the assembly’s leaders were absent.

Drummond, who has organized numerous Black Lives Matter protests in the Scranton and surrounding areas, decided to help fill the vacuum and lead the movement after protesters asked for her help. She said on Wednesday that any BLM protest is naturally a leaderless groundswell movement, but that doesn’t mean that there can’t be parts of the groundswell doing most of the organizing.

“There’s real interest here,” Drummond told the Review. “Every protester is a leader.”

The protest lasted from 1 p.m. until about 8:30 p.m. and around 30 people joined in the group throughout the day as they held signs in protest of police brutality near the Walmart entrance on Elmira Street. The group said that they had received a lot of pushback from passersby in the form of middle fingers and profanities yelled at them.

“For every middle finger there are four or five people telling us to keep going,” Drummond said of the reception of the protest. “Some even came by and dropped of food and water for us.”

Many Black Lives Matter protests of police brutality have been diminished by authorities and local leaders saying that the groups are not locals, but outside agitators. Drummond said it’s true that she does not live in the Valley, but that she has spend a lot of time there with family and has experienced instances of racism while there.

“I’ve seen my family been called (racial expletives), ask any person of color living here if they have experienced it,” she recounted. “There’s no opinions on this. There’s right and wrong.”

She went on to say that just because the Valley and Bradford County area are predominantly white, poor and rural doesn’t mean that they cannot stand in solidarity with the Black Lives Matter movement. Police brutality, while a predominately person of color issue, still affects poor white people as well she remarked.

“They have the same enemy, a lot of them just don’t see it,” Drummond said of lower-class white people in rural areas. “A lot have the same mentality as the wealthy but suffer the same as the oppressed.”

The Creating Change FTP Sayre chapter is organizing for more protest in the future in the Valley. The group will have a dedicated Facebook page for the Sayre chapter soon and asks that anyone wishing to communicate with them do so through email, creatingchangeftp@gmail.com.

When asked what the group hopes to achieve with the protests, Drummond said she hoped they could make progress in achieving a collective consciousness of what power is with all oppressed people in the area through education.

“Education is the key,” she said. 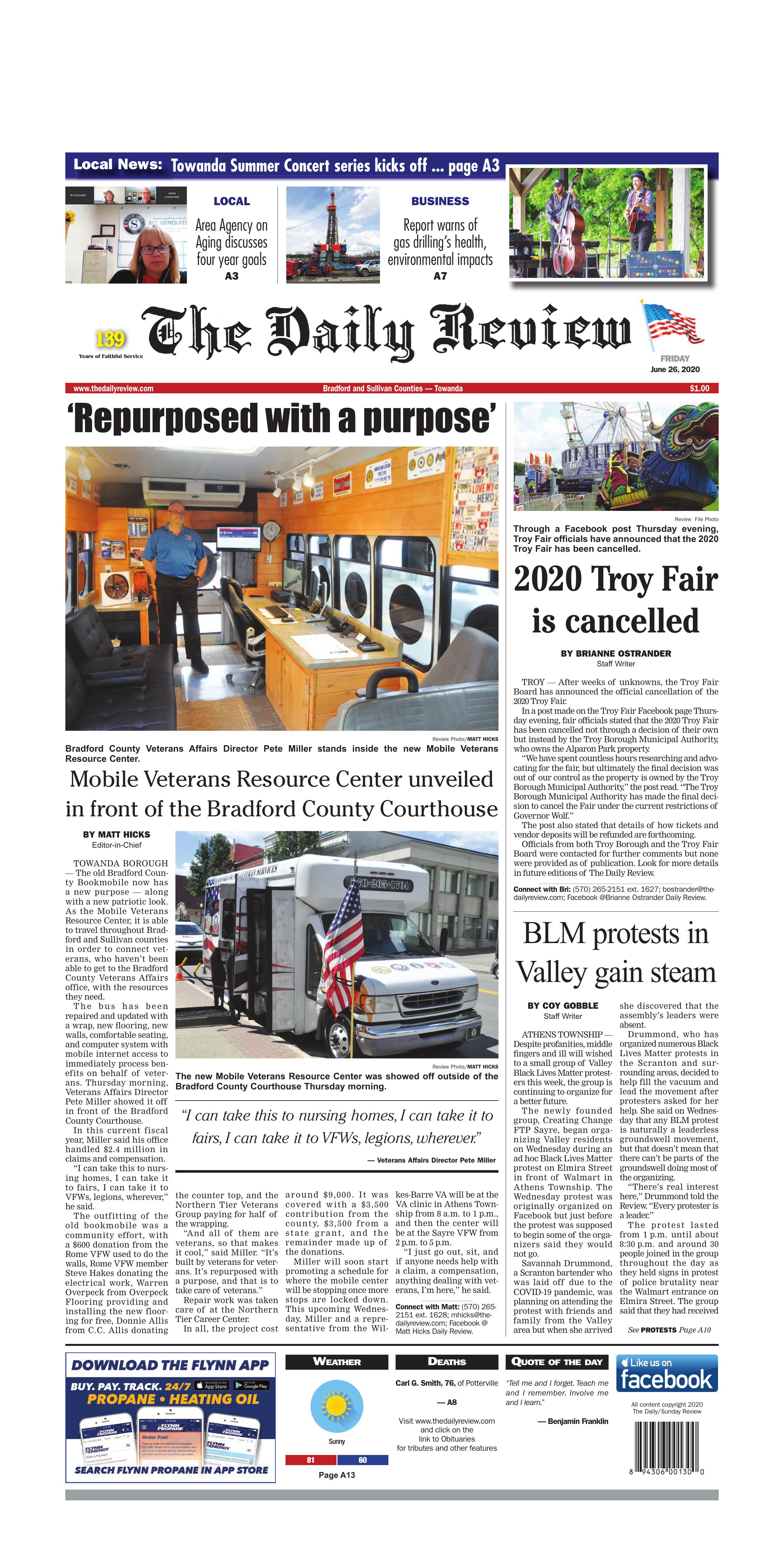