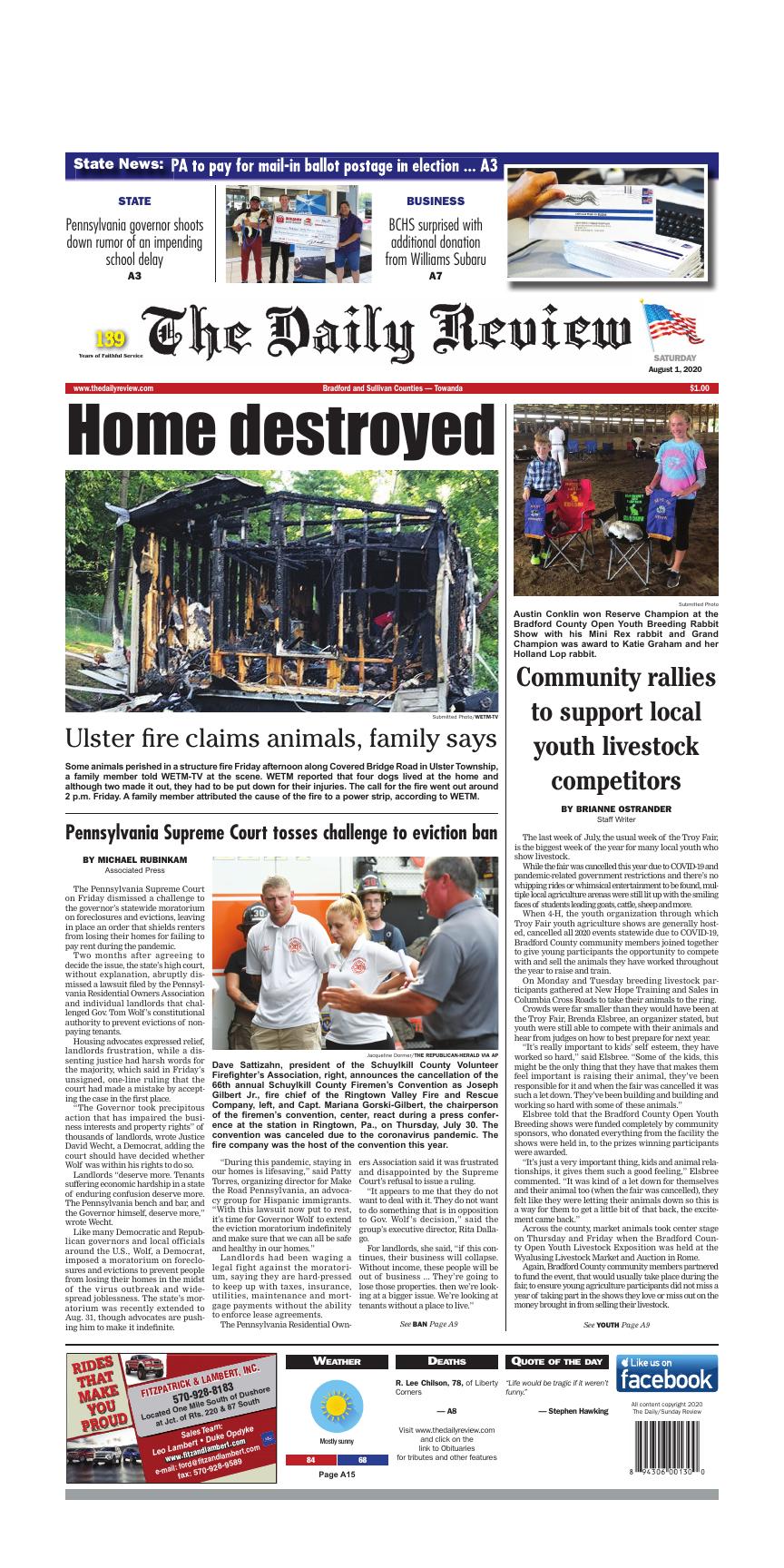 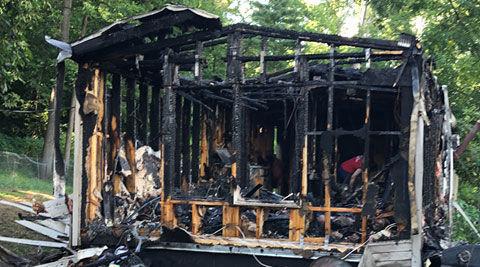 Some animals perished in a structure fire Friday afternoon along Covered Bridge Road in Ulster Township, a family member told WETM-TV at the scene. WETM reported that four dogs lived at the home and although two made it out, they had to be put down for their injuries. The call for the fire went out around 2 p.m. Friday. A family member attributed the cause of the fire to a power strip, according to WETM.

Youth market livestock show participants competed in open shows at the Wyalusing Livestock Market and Auction in Rome on Thursday and participated in a livestock sale on Friday.

While the fair was cancelled this year due to COVID-19 and pandemic-related government restrictions and there’s no whipping rides or whimsical entertainment to be found, multiple local agriculture arenas were still lit up with the smiling faces of students leading goats, cattle, sheep and more.

When 4-H, the youth organization through which Troy Fair youth agriculture shows are generally hosted, cancelled all 2020 events statewide due to COVID-19, Bradford County community members joined together to give young participants the opportunity to compete with and sell the animals they have worked throughout the year to raise and train.

On Monday and Tuesday breeding livestock participants gathered at New Hope Training and Sales in Columbia Cross Roads to take their animals to the ring.

Crowds were far smaller than they would have been at the Troy Fair, Brenda Elsbree, an organizer stated, but youth were still able to compete with their animals and hear from judges on how to best prepare for next year.

“It’s really important to kids’ self esteem, they have worked so hard,” said Elsbree. “Some of the kids, this might be the only thing that they have that makes them feel important is raising their animal, they’ve been responsible for it and when the fair was cancelled it was such a let down. They’ve been building and building and working so hard with some of these animals.”

Elsbree told that the Bradford County Open Youth Breeding shows were funded completely by community sponsors, who donated everything from the facility the shows were held in, to the prizes winning participants were awarded.

“It’s just a very important thing, kids and animal relationships, it gives them such a good feeling,” Elsbree commented. “It was kind of a let down for themselves and their animal too (when the fair was cancelled), they felt like they were letting their animals down so this is a way for them to get a little bit of that back, the excitement came back.”

Across the county, market animals took center stage on Thursday and Friday when the Bradford County Open Youth Livestock Exposition was held at the Wyalusing Livestock Market and Auction in Rome.

Again, Bradford County community members partnered to fund the event, that would usually take place during the fair, to ensure young agriculture participants did not miss a year of taking part in the shows they love or miss out on the money brought in from selling their livestock.

Fifty participants took part in the Rome show and sale.

“Once we heard 4-H cancelled the show, we felt compelled to help the youth in the community that enjoy showing their animals and to offer them a show and sale,” Michelle Harnish, owner of the Wyalusing Livestock Market and Auction stated.

A group of organizers assembled and brought the event together with only four weeks’ notice.

“Any opportunity to get youth involved in agriculture is good for the community,” Harnish said. “The youth have worked hard with their animals and we wanted them to have the opportunity to showcase them.”

Harnish added that the shows help “to inspire the generation of youth that will grow our food” and added that livestock events teach “responsibility, respect and to deal with every situation.”

Though 2020 looked much different than any show season before it for young agriculture enthusiasts, the passion, hard work and dedication they invest into their livestock showed brightly from the show rings — as did the community support that stands behind them. 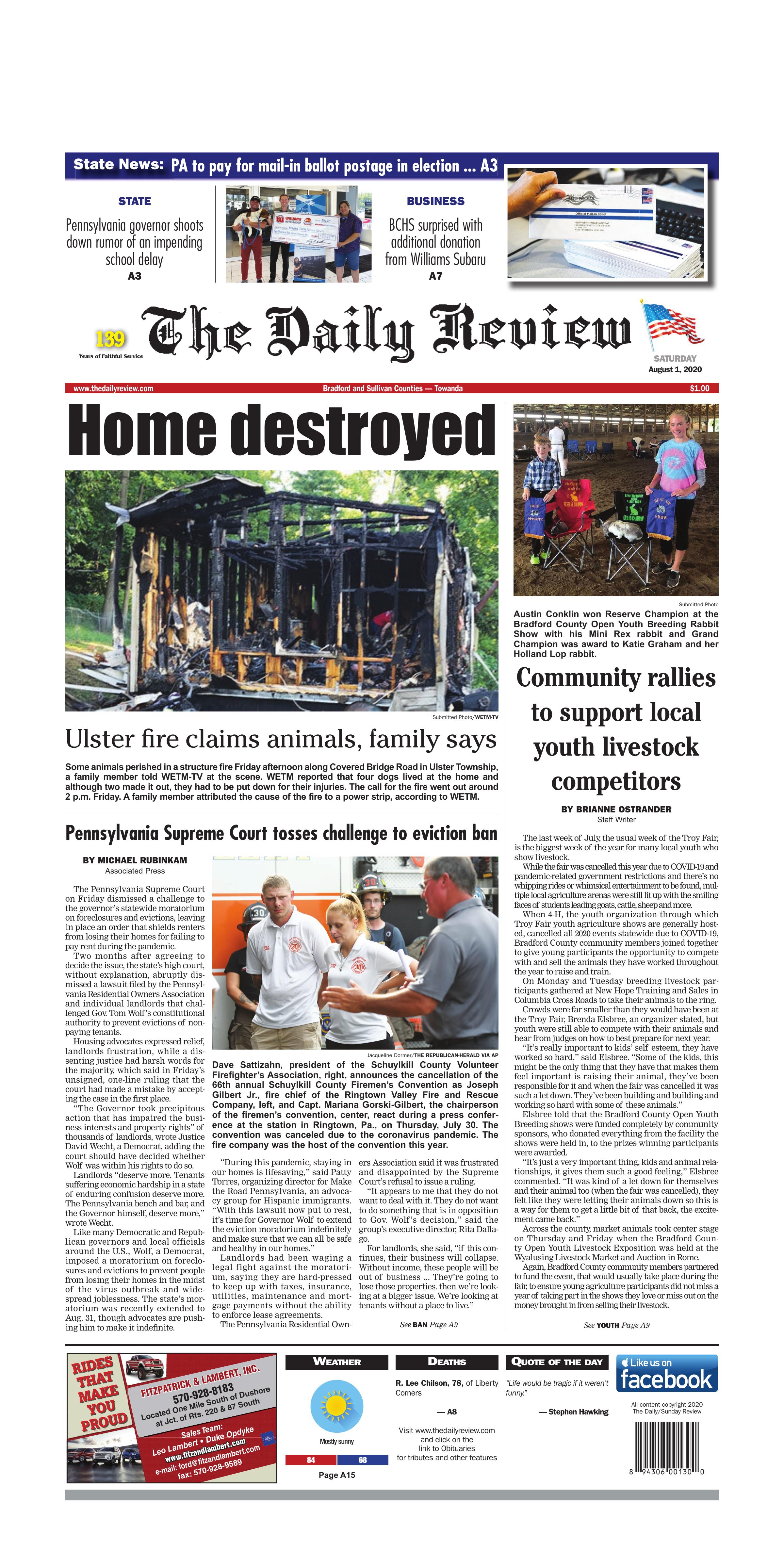