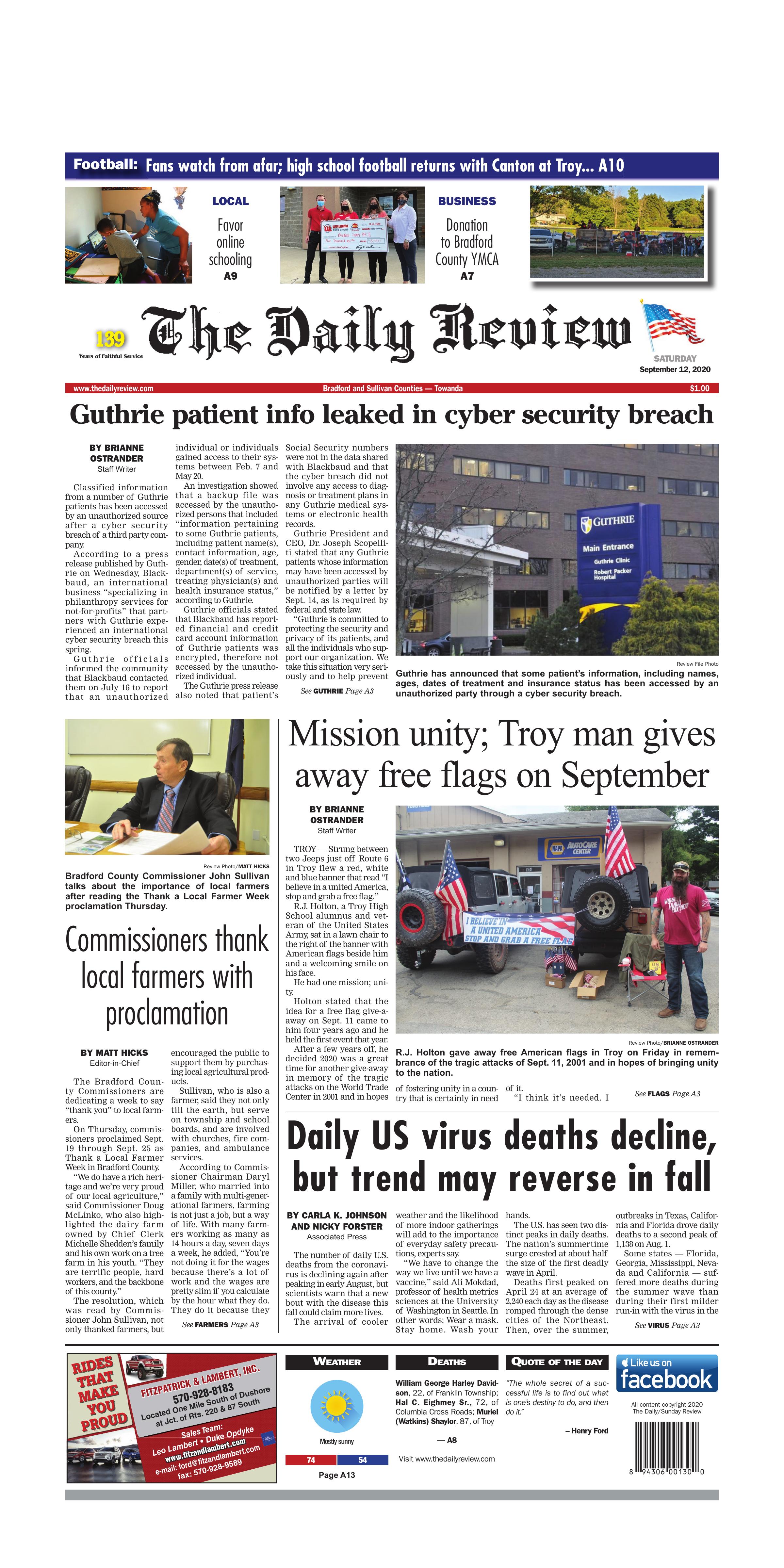 Guthrie has announced that some patient’s information, including names, ages, dates of treatment and insurance status has been accessed by an unauthorized party through a cyber security breach.

Classified information from a number of Guthrie patients has been accessed by an unauthorized source after a cyber security breach of a third party company.

According to a press release published by Guthrie on Wednesday, Blackbaud, an international business “specializing in philanthropy services for not-for-profits” that partners with Guthrie experienced an international cyber security breach this spring.

Guthrie officials informed the community that Blackbaud contacted them on July 16 to report that an unauthorized individual or individuals gained access to their systems between Feb. 7 and May 20.

An investigation showed that a backup file was accessed by the unauthorized persons that included “information pertaining to some Guthrie patients, including patient name(s), contact information, age, gender, date(s) of treatment, department(s) of service, treating physician(s) and health insurance status,” according to Guthrie.

Guthrie officials stated that Blackbaud has reported financial and credit card account information of Guthrie patients was encrypted, therefore not accessed by the unauthorized individual.

The Guthrie press release also noted that patient’s Social Security numbers were not in the data shared with Blackbaud and that the cyber breach did not involve any access to diagnosis or treatment plans in any Guthrie medical systems or electronic health records.

Guthrie President and CEO, Dr. Joseph Scopelliti stated that any Guthrie patients whose information may have been accessed by unauthorized parties will be notified by a letter by Sept. 14, as is required by federal and state law.

“Guthrie is committed to protecting the security and privacy of its patients, and all the individuals who support our organization. We take this situation very seriously and to help prevent something like this from happening again, Guthrie is examining its vendor relationship with Blackbaud and evaluating other alternatives,” Scopelliti commented.

Scopelliti also pointed out that the cyber breach was “not unique” to Guthrie and occurred at thousands of other organizations in partnership with Blackbaud.

R.J. Holton gave away free American flags in Troy on Friday in remembrance of the tragic attacks of Sept. 11, 2001 and in hopes of bringing unity to the nation.

TROY — Strung between two Jeeps just off Route 6 in Troy flew a red, white and blue banner that read “I believe in a united America, stop and grab a free flag.”

R.J. Holton, a Troy High School alumnus and veteran of the United States Army, sat in a lawn chair to the right of the banner with American flags beside him and a welcoming smile on his face.

He had one mission; unity.

Holton stated that the idea for a free flag give-a-away on Sept. 11 came to him four years ago and he held the first event that year.

After a few years off, he decided 2020 was a great time for another give-away in memory of the tragic attacks on the World Trade Center in 2001 and in hopes of fostering unity in a country that is certainly in need of it.

Holton funds the flag give-away himself, and explained that the event is not political but instead simply patriotic.

“We all get caught up in our own lives, which is understandable, I just think that we all need a reminder, not just of the events of Sept. 11 but that we are all in this together, we’re all human beings, we all have our own point of views, but there’s no reason we can’t come together,” he said.

Holton hoped community members that visited the event took away two things; an American flag and “to remember that the country is one and now, times more than ever, they need to remember that. We’re all here together.”

The Bradford County Commissioners are dedicating a week to say “thank you” to local farmers.

On Thursday, commissioners proclaimed Sept. 19 through Sept. 25 as Thank a Local Farmer Week in Bradford County.

“We do have a rich heritage and we’re very proud of our local agriculture,” said Commissioner Doug McLinko, who also highlighted the dairy farm owned by Chief Clerk Michelle Shedden’s family and his own work on a tree farm in his youth. “They are terrific people, hard workers, and the backbone of this county.”

The resolution, which was read by Commissioner John Sullivan, not only thanked farmers, but encouraged the public to support them by purchasing local agricultural products.

Sullivan, who is also a farmer, said they not only till the earth, but serve on township and school boards, and are involved with churches, fire companies, and ambulance services.

According to Commissioner Chairman Daryl Miller, who married into a family with multi-generational farmers, farming is not just a job, but a way of life. With many farmers working as many as 14 hours a day, seven days a week, he added, “You’re not doing it for the wages because there’s a lot of work and the wages are pretty slim if you calculate by the hour what they do. They do it because they love it.”

“A guy who works my farm, he got up (Wednesday) morning at 2 o’clock in the morning and he finished up the hay on our farm. (Wednesday) night he loaded up trailer to take a load of mulch hay to Reading and hoped to get down there by midnight, get three or four hours of sleep, and then bring a load back,” Sullivan explained. “I admire how hard he works.”

Miller noted that farmers are not only crucial to the local food supply, but for the supply around the world.