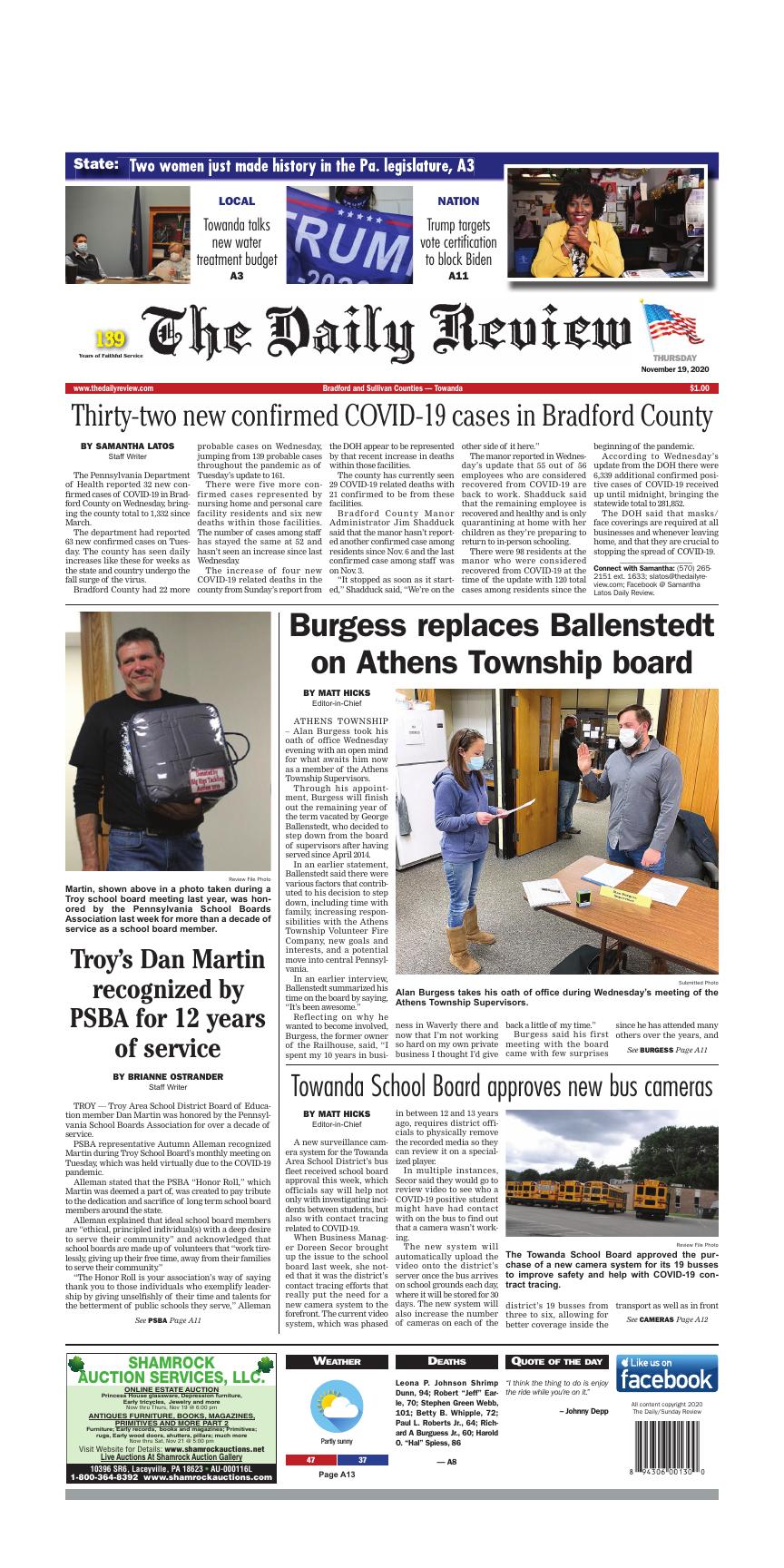 The Pennsylvania Department of Health reported 32 new confirmed cases of COVID-19 in Bradford County on Wednesday, bringing the county total to 1,332 since March.

The department had reported 63 new confirmed cases on Tuesday. The county has seen daily increases like these for weeks as the state and country undergo the fall surge of the virus.

There were five more confirmed cases represented by nursing home and personal care facility residents and six new deaths within those facilities. The number of cases among staff has stayed the same at 52 and hasn’t seen an increase since last Wednesday.

The increase of four new COVID-19 related deaths in the county from Sunday’s report from the DOH appear to be represented by that recent increase in deaths within those facilities.

The county has currently seen 29 COVID-19 related deaths with 21 confirmed to be from these facilities.

“It stopped as soon as it started,” Shadduck said, “We’re on the other side of it here.”

The manor reported in Wednesday’s update that 55 out of 56 employees who are considered recovered from COVID-19 are back to work. Shadduck said that the remaining employee is recovered and healthy and is only quarantining at home with her children as they’re preparing to return to in-person schooling.

There were 98 residents at the manor who were considered recovered from COVID-19 at the time of the update with 120 total cases among residents since the beginning of the pandemic.

According to Wednesday’s update from the DOH there were 6,339 additional confirmed positive cases of COVID-19 received up until midnight, bringing the statewide total to 281,852.

The DOH said that masks/face coverings are required at all businesses and whenever leaving home, and that they are crucial to stopping the spread of COVID-19.

Alan Burgess takes his oath of office during Wednesday’s meeting of the Athens Township Supervisors.

ATHENS TOWNSHIP – Alan Burgess took his oath of office Wednesday evening with an open mind for what awaits him now as a member of the Athens Township Supervisors.

Through his appointment, Burgess will finish out the remaining year of the term vacated by George Ballenstedt, who decided to step down from the board of supervisors after having served since April 2014.

In an earlier statement, Ballenstedt said there were various factors that contributed to his decision to step down, including time with family, increasing responsibilities with the Athens Township Volunteer Fire Company, new goals and interests, and a potential move into central Pennsylvania.

In an earlier interview, Ballenstedt summarized his time on the board by saying, “It’s been awesome.”

Reflecting on why he wanted to become involved, Burgess, the former owner of the Railhouse, said, “I spent my 10 years in business in Waverly there and now that I’m not working so hard on my own private business I thought I’d give back a little of my time.”

Burgess said his first meeting with the board came with few surprises since he has attended many others over the years, and that it felt good to be able to give back to his community in this way.

The Towanda School Board approved the purchase of a new camera system for its 19 busses to improve safety and help with COVID-19 contract tracing.

A new surveillance camera system for the Towanda Area School District’s bus fleet received school board approval this week, which officials say will help not only with investigating incidents between students, but also with contact tracing related to COVID-19.

When Business Manager Doreen Secor brought up the issue to the school board last week, she noted that it was the district’s contact tracing efforts that really put the need for a new camera system to the forefront. The current video system, which was phased in between 12 and 13 years ago, requires district officials to physically remove the recorded media so they can review it on a specialized player.

In multiple instances, Secor said they would go to review video to see who a COVID-19 positive student might have had contact with on the bus to find out that a camera wasn’t working.

The new system will automatically upload the video onto the district’s server once the bus arrives on school grounds each day, where it will be stored for 30 days. The new system will also increase the number of cameras on each of the district’s 19 busses from three to six, allowing for better coverage inside the transport as well as in front to catch anyone driving through a bus’ stop sign.

“It’s just a godsend for administration, for the school district,” said Peachey. “In terms of safety, being able to see what’s going on on that bus and being able to resolve those problems with that clear evidence that this is what took place. It’s just disheartening to have a parent call and say this took place on the bus, and when you look into it you find that the bus camera was down or didn’t see it.”

The current system requires officials to hook a laptop to one of the 19 surveillance video systems to make sure all of the cameras are working. The new system will generate reports on a weekly basis that show if a camera is malfunctioning.

The $82,704 cost is being covered partially through capital reserve funds and through $46,039 in Pennsylvania Commission on Crime and Delinquency grand funding. The district is purchasing the system through SafeFleet.

School board member Matt Tavani again voiced concerns that he didn’t want anyone outside of the district, including state officials involved with contact tracing, to have access to the footage.

Secor assured that only authorized administrators have access to video footage, and the district’s servers are secure.

“We are very very cautious,” she added. “We have parents all of the time ask to see videos and we will not allow them.”

Peachey noted that it usually takes a court order for anyone outside of the district to view the footage.

In the past, this has only happened with cases involving Children and Youth Service investigations, Secor said last week.

Camera systems will not be placed on spare busses or the district’s vans, although van drivers are able to utilize a portable system when needed in certain situations, Secor noted.

Martin, shown above in a photo taken during a Troy school board meeting last year, was honored by the Pennsylvania School Boards Association last week for more than a decade of service as a school board member.

TROY — Troy Area School District Board of Education member Dan Martin was honored by the Pennsylvania School Boards Association for over a decade of service.

PSBA representative Autumn Alleman recognized Martin during Troy School Board’s monthly meeting on Tuesday, which was held virtually due to the COVID-19 pandemic.

Alleman stated that the PSBA “Honor Roll,” which Martin was deemed a part of, was created to pay tribute to the dedication and sacrifice of long term school board members around the state.

“The Honor Roll is your association’s way of saying thank you to those individuals who exemplify leadership by giving unselfishly of their time and talents for the betterment of public schools they serve,” Alleman said.

Alleman thanked Martin for serving as a Troy Area School District Board of Education member for 12 years and stated that a certificate of appreciation will be mailed to him. 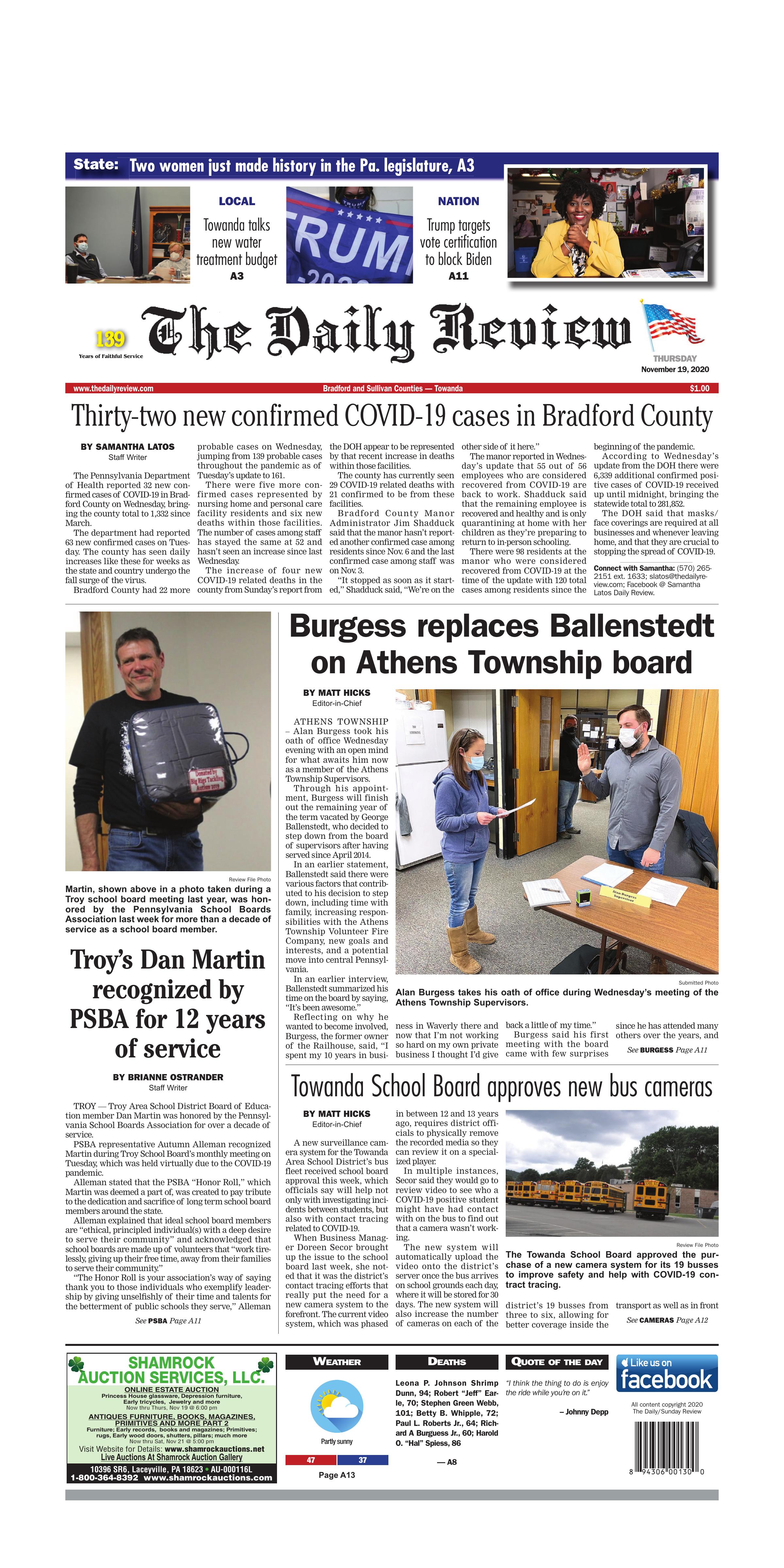