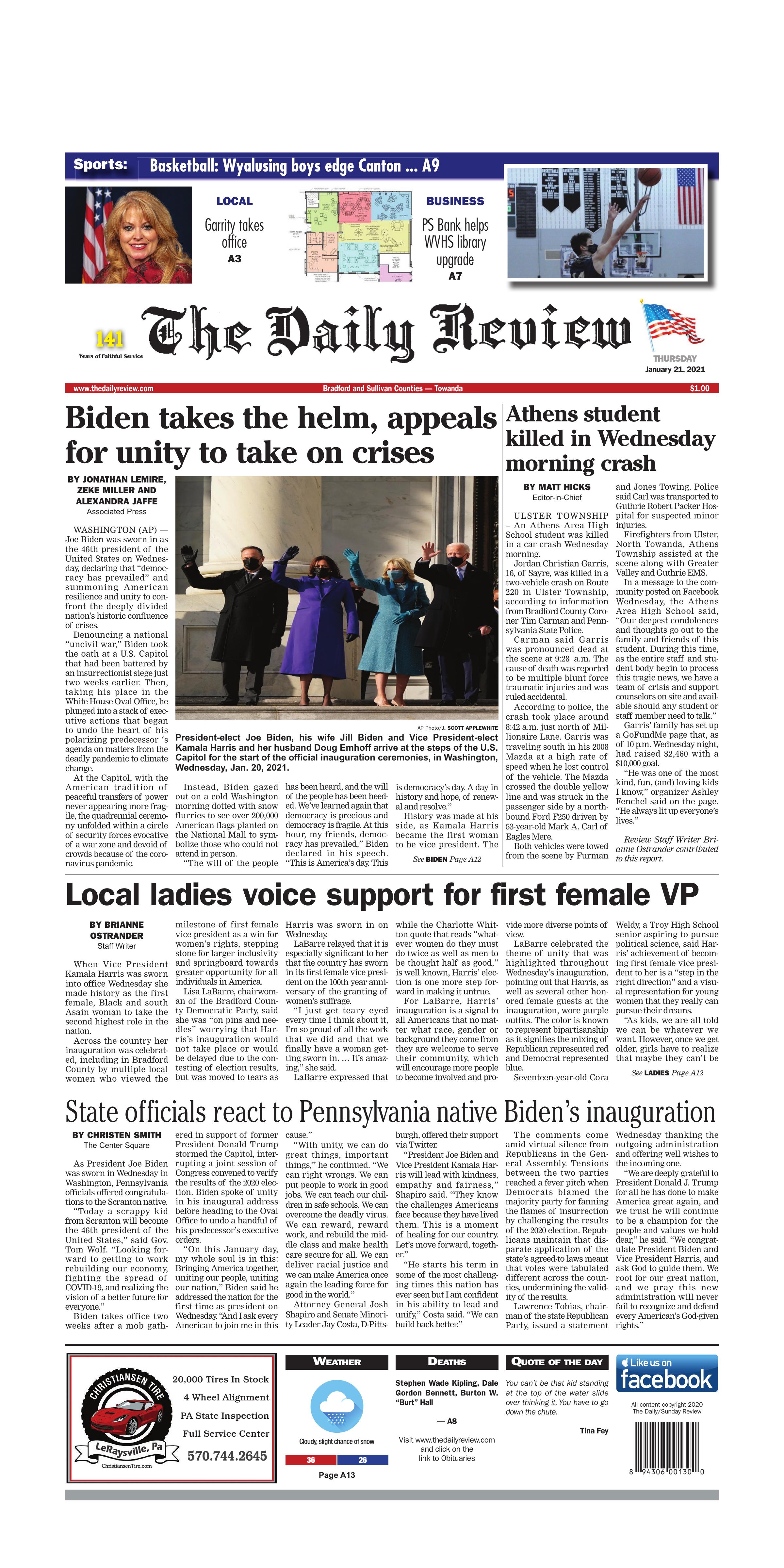 When Vice President Kamala Harris was sworn into office Wednesday she made history as the first female, Black and south Asain woman to take the second highest role in the nation.

Across the country her inauguration was celebrated, including in Bradford County by multiple local women who viewed the milestone of first female vice president as a win for women’s rights, stepping stone for larger inclusivity and springboard towards greater opportunity for all individuals in America.

Lisa LaBarre, chairwoman of the Bradford County Democratic Party, said she was “on pins and needles” worrying that Harris’s inauguration would not take place or would be delayed due to the contesting of election results, but was moved to tears as Harris was sworn in on Wednesday.

LaBarre relayed that it is especially significant to her that the country has sworn in its first female vice president on the 100th year anniversary of the granting of women’s suffrage.

“I just get teary eyed every time I think about it, I’m so proud of all the work that we did and that we finally have a woman getting sworn in. … It’s amazing,” she said.

LaBarre expressed that while the Charlotte Whitton quote that reads “whatever women do they must do twice as well as men to be thought half as good,” is well known, Harris’ election is one more step forward in making it untrue.

For LaBarre, Harris’ inauguration is a signal to all Americans that no matter what race, gender or background they come from they are welcome to serve their community, which will encourage more people to become involved and provide more diverse points of view.

LaBarre celebrated the theme of unity that was highlighted throughout Wednesday’s inauguration, pointing out that Harris, as well as several other honored female guests at the inauguration, wore purple outfits. The color is known to represent bipartisanship as it signifies the mixing of Republican represented red and Democrat represented blue.

Seventeen-year-old Cora Weldy, a Troy High School senior aspiring to pursue political science, said Harris’ achievement of becoming first female vice president to her is a “step in the right direction” and a visual representation for young women that they really can pursue their dreams.

“As kids, we are all told we can be whatever we want. However, once we get older, girls have to realize that maybe they can’t be whatever (they) want. We see all these careers that we want to go in, but we never see any representation, so those dreams die within us and we tend to stick to traditional ‘female’ jobs,” Weldy said. “For the next four years, little girls in this country will see for the first time a female vice president. A lot of people don’t understand how much of a confidence boost that is.”

Weldy feels there is still a double standard in American politics that allows women in legislation such as Alexandra Ocasio-Cortez to be “degraded’ for for actions like dancing in a college video while there are men serving in the same positions who have been accused of sexual assault. Women such as Ocasio-Cortez and Harris who have preservered through bias are role model for young women, Weldy said.

“(They) will make little girls believe they can be like them. In the coming years, we will see more women in politics. We are no longer the housewives we were less than a century ago. We now know we are strong and independent and we can make it all the way to the White House,” she added.

Weldy also celebrated Harris’s role as the first Black vice president, stating that it “represents a change in U.S. politics.”

“For too long, the American people have been represented by white, straight, cisgender, men. We are seeing a change happen, and all three branches of government are finally starting to look like America,” she said, giving examples of officials like Rachel Levine, IIhan Omar, Kyrsten Sinema and Tammy Baldwin. “Soon, the highest branches of our government will become an accurate representation of America. Even if you don’t like Vice President Kamala Harris, you have to recognize that she is breaking through centuries old barriers and is leading the charge into a new generation of politics.”

Jala Kidd, of Troy, agreed that Harris’s accomplishment is a stepping stone for more unity and equity across the nation.

“I feel that the inauguration of our first female vice president is a reflection of the people’s needs and a very positive step toward the nation feeling more united,” she said.

Kidd stated that “an outstanding number” of people chose to vote in the 2020 election and that she feels that is because “they wanted to be heard after four years of many feeling that they weren’t being heard and that they didn’t matter.”

“A female vice president knows and best relates to the needs of women and I believe she will be an strong advocate in protecting women’s rights and promoting gender equality. I believe seeing a woman hold such a position gives other women hope that they will be represented in a more positive way and their voices will continue to be heard,” Kidd said.

She feels the inauguration of Harris “validates the fact that females are just as capable as men to hold such prestigious positions and shows that change is possible.”

“I think Vice President Harris will be a role model to many young girls and women alike, a shining example that in America you can succeed regardless of your gender, race, ethnicity, or background. I think she will bring hope to those who have felt suppressed, hope that they will be heard and that policies will reflect the nation as a whole and the needs of all its’ people. Hope that the divisiveness that has been felt the last four years will soften and that equality for all is a real possibility,” Kidd said.

As President Joe Biden was sworn in Wednesday in Washington, Pennsylvania officials offered congratulations to the Scranton native.

“Today a scrappy kid from Scranton will become the 46th president of the United States,” said Gov. Tom Wolf. “Looking forward to getting to work rebuilding our economy, fighting the spread of COVID-19, and realizing the vision of a better future for everyone.”

Biden takes office two weeks after a mob gathered in support of former President Donald Trump stormed the Capitol, interrupting a joint session of Congress convened to verify the results of the 2020 election. Biden spoke of unity in his inaugural address before heading to the Oval Office to undo a handful of his predecessor’s executive orders.

“On this January day, my whole soul is in this: Bringing America together, uniting our people, uniting our nation,” Biden said he addressed the nation for the first time as president on Wednesday. “And I ask every American to join me in this cause.”

“With unity, we can do great things, important things,” he continued. “We can right wrongs. We can put people to work in good jobs. We can teach our children in safe schools. We can overcome the deadly virus. We can reward, reward work, and rebuild the middle class and make health care secure for all. We can deliver racial justice and we can make America once again the leading force for good in the world.”

“President Joe Biden and Vice President Kamala Harris will lead with kindness, empathy and fairness,” Shapiro said. “They know the challenges Americans face because they have lived them. This is a moment of healing for our country. Let’s move forward, together.”

“He starts his term in some of the most challenging times this nation has ever seen but I am confident in his ability to lead and unify,” Costa said. “We can build back better.”

The comments come amid virtual silence from Republicans in the General Assembly. Tensions between the two parties reached a fever pitch when Democrats blamed the majority party for fanning the flames of insurrection by challenging the results of the 2020 election. Republicans maintain that disparate application of the state’s agreed-to laws meant that votes were tabulated different across the counties, undermining the validity of the results.

Lawrence Tobias, chairman of the state Republican Party, issued a statement Wednesday thanking the outgoing administration and offering well wishes to the incoming one.

“We are deeply grateful to President Donald J. Trump for all he has done to make America great again, and we trust he will continue to be a champion for the people and values we hold dear,” he said. “We congratulate President Biden and Vice President Harris, and ask God to guide them. We root for our great nation, and we pray this new administration will never fail to recognize and defend every American’s God-given rights.”

Jordan Christian Garris, 16, of Sayre, was killed in a two-vehicle crash on Route 220 in Ulster Township, according to information from Bradford County Coroner Tim Carman and Pennsylvania State Police.

Carman said Garris was pronounced dead at the scene at 9:28 a.m. The cause of death was reported to be multiple blunt force traumatic injuries and was ruled accidental.

According to police, the crash took place around 8:42 a.m. just north of Millionaire Lane. Garris was traveling south in his 2008 Mazda at a high rate of speed when he lost control of the vehicle. The Mazda crossed the double yellow line and was struck in the passenger side by a northbound Ford F250 driven by 53-year-old Mark A. Carl of Eagles Mere.

Both vehicles were towed from the scene by Furman and Jones Towing. Police said Carl was transported to Guthrie Robert Packer Hospital for suspected minor injuries.

Firefighters from Ulster, North Towanda, Athens Township assisted at the scene along with Greater Valley and Guthrie EMS.

In a message to the community posted on Facebook Wednesday, the Athens Area High School said, “Our deepest condolences and thoughts go out to the family and friends of this student. During this time, as the entire staff and student body begin to process this tragic news, we have a team of crisis and support counselors on site and available should any student or staff member need to talk.”

“He was one of the most kind, fun, (and) loving kids I know,” organizer Ashley Fenchel said on the page. “He always lit up everyone’s lives.”