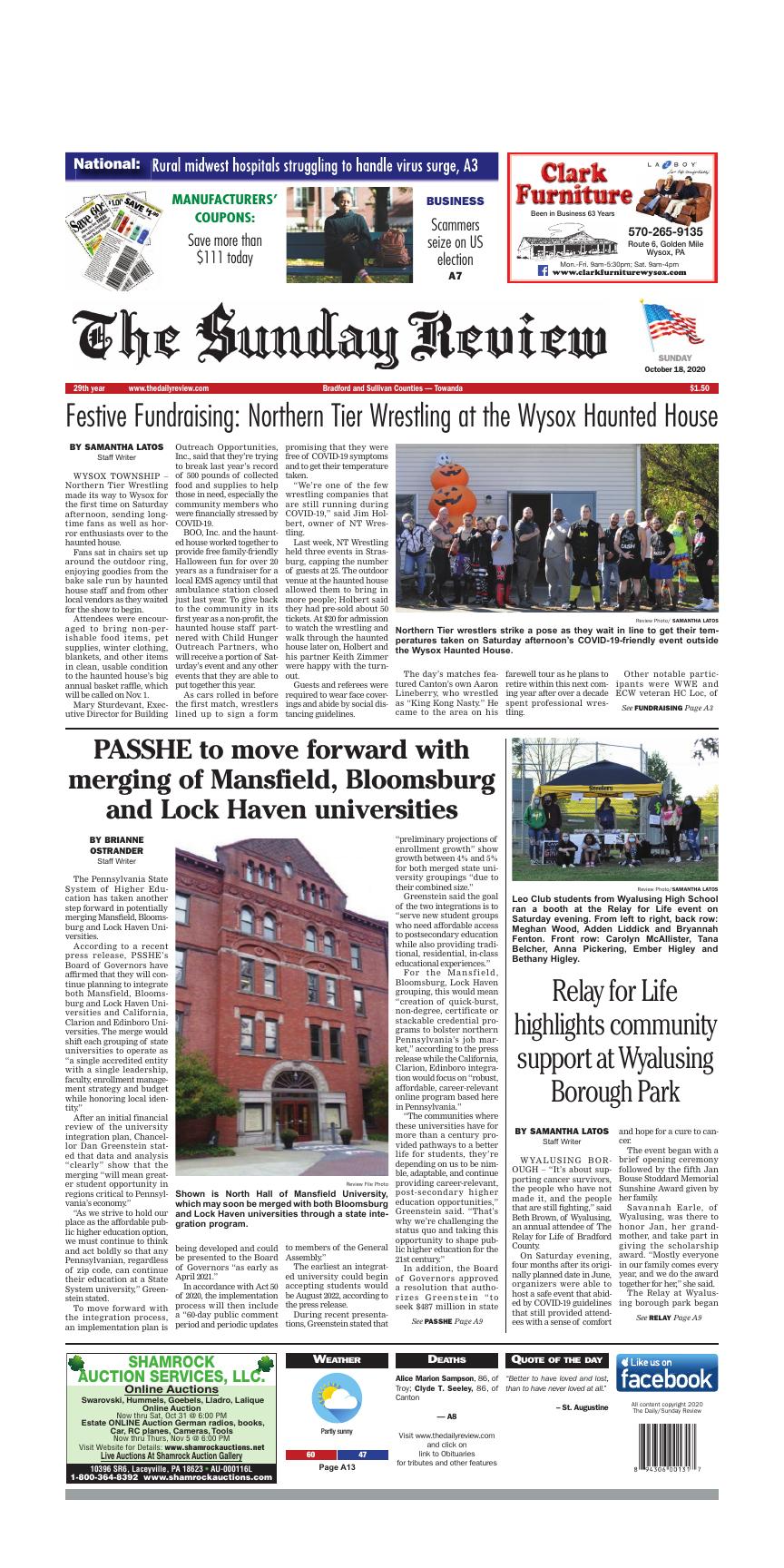 Northern Tier wrestlers strike a pose as they wait in line to get their temperatures taken on Saturday afternoon’s COVID-19-friendly event outside the Wysox Haunted House.

WYSOX TOWNSHIP – Northern Tier Wrestling made its way to Wysox for the first time on Saturday afternoon, sending longtime fans as well as horror enthusiasts over to the haunted house.

Fans sat in chairs set up around the outdoor ring, enjoying goodies from the bake sale run by haunted house staff and from other local vendors as they waited for the show to begin.

Attendees were encouraged to bring non-perishable food items, pet supplies, winter clothing, blankets, and other items in clean, usable condition to the haunted house’s big annual basket raffle, which will be called on Nov. 1.

Mary Sturdevant, Executive Director for Building Outreach Opportunities, Inc., said that they’re trying to break last year’s record of 500 pounds of collected food and supplies to help those in need, especially the community members who were financially stressed by COVID-19.

BOO, Inc. and the haunted house worked together to provide free family-friendly Halloween fun for over 20 years as a fundraiser for a local EMS agency until that ambulance station closed just last year. To give back to the community in its first year as a non-profit, the haunted house staff partnered with Child Hunger Outreach Partners, who will receive a portion of Saturday’s event and any other events that they are able to put together this year.

As cars rolled in before the first match, wrestlers lined up to sign a form promising that they were free of COVID-19 symptoms and to get their temperature taken.

“We’re one of the few wrestling companies that are still running during COVID-19,” said Jim Holbert, owner of NT Wrestling.

Last week, NT Wrestling held three events in Strasburg, capping the number of guests at 25. The outdoor venue at the haunted house allowed them to bring in more people; Holbert said they had pre-sold about 50 tickets. At $20 for admission to watch the wrestling and walk through the haunted house later on, Holbert and his partner Keith Zimmer were happy with the turnout.

Guests and referees were required to wear face coverings and abide by social distancing guidelines.

The day’s matches featured Canton’s own Aaron Lineberry, who wrestled as “King Kong Nasty.” He came to the area on his farewell tour as he plans to retire within this next coming year after over a decade spent professional wrestling.

Other notable participants were WWE and ECW veteran HC Loc, of Campbell, Mike Templar, of Elmira, and Chris Chichester of the tag team “Born to Wrestle.”

An anticipated part of the afternoon was the match between wrestlers Anarchy and Rob Cook, who had gone over 10 years without facing each other one-on-one.

“(NT Wrestling) offered to come out here and do an event to benefit us, and we are happy to have them here,” said Sturdevant.

She said that normally, by this time, the haunted house would have held multiple fundraising events, but the staff had to hold off to keep themselves and the community safe and healthy during the ongoing pandemic.

“The goal is always to bring the community together,” Sturdevant said, “We will continue to have fundraisers to keep us going, and we will also have free community events.”

Shown is North Hall of Mansfield University, which may soon be merged with both Bloomsburg and Lock Haven universities through a state integration program.

According to a recent press release, PSSHE’s Board of Governors have affirmed that they will continue planning to integrate both Mansfield, Bloomsburg and Lock Haven Universities and California, Clarion and Edinboro Universities. The merge would shift each grouping of state universities to operate as “a single accredited entity with a single leadership, faculty, enrollment management strategy and budget while honoring local identity.”

After an initial financial review of the university integration plan, Chancellor Dan Greenstein stated that data and analysis “clearly” show that the merging “will mean greater student opportunity in regions critical to Pennsylvania’s economy.”

“As we strive to hold our place as the affordable public higher education option, we must continue to think and act boldly so that any Pennsylvanian, regardless of zip code, can continue their education at a State System university,” Greenstein stated.

To move forward with the integration process, an implementation plan is being developed and could be presented to the Board of Governors “as early as April 2021.”

In accordance with Act 50 of 2020, the implementation process will then include a “60-day public comment period and periodic updates to members of the General Assembly.”

The earliest an integrated university could begin accepting students would be August 2022, according to the press release.

During recent presentations, Greenstein stated that “preliminary projections of enrollment growth” show growth between 4% and 5% for both merged state university groupings “due to their combined size.”

For the Mansfield, Bloomsburg, Lock Haven grouping, this would mean “creation of quick-burst, non-degree, certificate or stackable credential programs to bolster northern Pennsylvania’s job market,” according to the press release while the California, Clarion, Edinboro integration would focus on “robust, affordable, career-relevant online program based here in Pennsylvania.”

“The communities where these universities have for more than a century provided pathways to a better life for students, they’re depending on us to be nimble, adaptable, and continue providing career-relevant, post-secondary higher education opportunities,” Greenstein said. “That’s why we’re challenging the status quo and taking this opportunity to shape public higher education for the 21st century.”

In addition, the Board of Governors approved a resolution that authorizes Greenstein “to seek $487 million in state appropriations for 2021-22 (a 2% increase over the current year).”

PASSHE will also attempt to gain $25 million for System Redesign efforts as part of a multi-year request approved by the Board last year.

“We enjoy a collaborative, candid, and supportive partnership with the Commonwealth of Pennsylvania,” said Board of Governing Chair Cindy Shapira. “We acknowledge that the State has many challenges to confront due to the coronavirus pandemic, and we also have a strong case to make that the State System is critical to the success of Pennsylvania’s economic future. That success depends on robust support from the Commonwealth that keeps tuition low, and we look forward to further conversations with our partners about the path forward.”

WYALUSING BOROUGH – “It’s about supporting cancer survivors, the people who have not made it, and the people that are still fighting,” said Beth Brown, of Wyalusing, an annual attendee of The Relay for Life of Bradford County.

On Saturday evening, four months after its originally planned date in June, organizers were able to host a safe event that abided by COVID-19 guidelines that still provided attendees with a sense of comfort and hope for a cure to cancer.

The event began with a brief opening ceremony followed by the fifth Jan Bouse Stoddard Memorial Sunshine Award given by her family.

Savannah Earle, of Wyalusing, was there to honor Jan, her grandmother, and take part in giving the scholarship award. “Mostly everyone in our family comes every year, and we do the award together for her,” she said.

The Relay at Wyalusing borough park began at 5 p.m. and went until 9 p.m. It was at first going to be a 12-hour long event with more activities, but this year they stuck with the basics for a good Relay: opening and closing ceremonies, a survivor/caregiver walk, and the luminara ceremony.

“It means a lot to me,” said luminara team member Sherrie Smith, “I do it one-hundred percent, and I do it in memory and to honor my mom who passed away in 2013 from colon cancer.”

Smith said the luminara team is a group of friends who all love someone whose lives have been affected by cancer, and they come together every year for the Relay to do their part in finding a cure.

The luminara committee sold bags for donations at the borough park starting at 2 p.m. Each luminary bag displayed the name of a loved one whose life has been affected by cancer in one way or another.

Luminara team member Natalie Staron said that the bags sold on Saturday evening were leftover from a drive-by ceremony on Sept. 3.

The luminaries were lit around 7:30 p.m., and attendees were welcome to walk by the bags lining the fence or look from their cars in a drive-by.

“The first ribbon is in purple in honor of Timmy Ward, who is the honorary chairperson of the event,” Staron said, “He has hodgkin’s lymphoma, which is represented by purple.”

Purple t-shirts were sold at the event, and the corresponding theme was “Ready! Set! Go! For a Cure.”

After the purple ribbon was lit, the word “hope” appeared, spelled out across the right side of the field in lit luminara bags.

“The next ribbon full of lights will fluctuate through 16 different colors to honor each of the different cancers,” Staron said.

On the opposite side of the field was a surprise pink ribbon for breast cancer awareness. Attendees weren’t expecting a pink ribbon, as breast cancer is usually recognized in June. This was one of the ways that organizers helped incorporate an idea they had for the originally scheduled Relay.

Many community members came out to show their support, including the Leo Club from Wyalusing High School. They held a booth where they sold caramel apples, glow-in-the-dark face paint and t-shirts for the Relay.

Beth Trowbridge, a mathematics teacher at the high school, credited the students of the Leo Club for stepping up and participating in the event, especially with the ongoing changing of plans that come with the pandemic.

Student Bryannah Fenton said, “This event is really special because even with everything going on, we still have problems that we are trying to solve.”

“It’s about raising money for people that have cancer, and we’re all having a lot of fun while doing it. I’ve been enjoying fundraising with the Leo Club, listening to the spin choir, and everyone else that’s been performing tonight,” said student Carolyn McAllister.

Student Tana Belcher said that the event was a great place to talk about cancer, and find out how to help.

Further information about Relay for Life can be found on the American Cancer Society’s website. 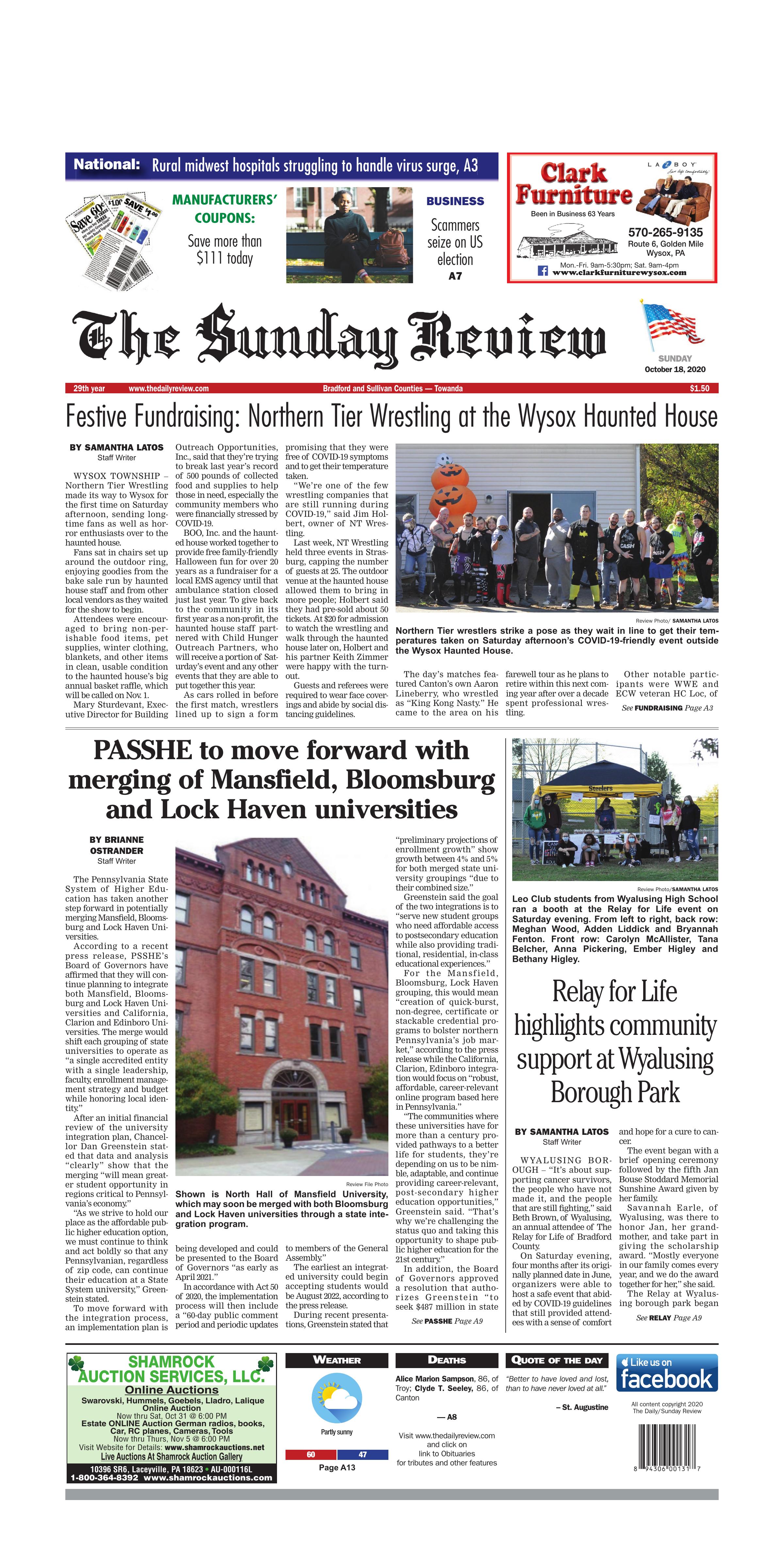