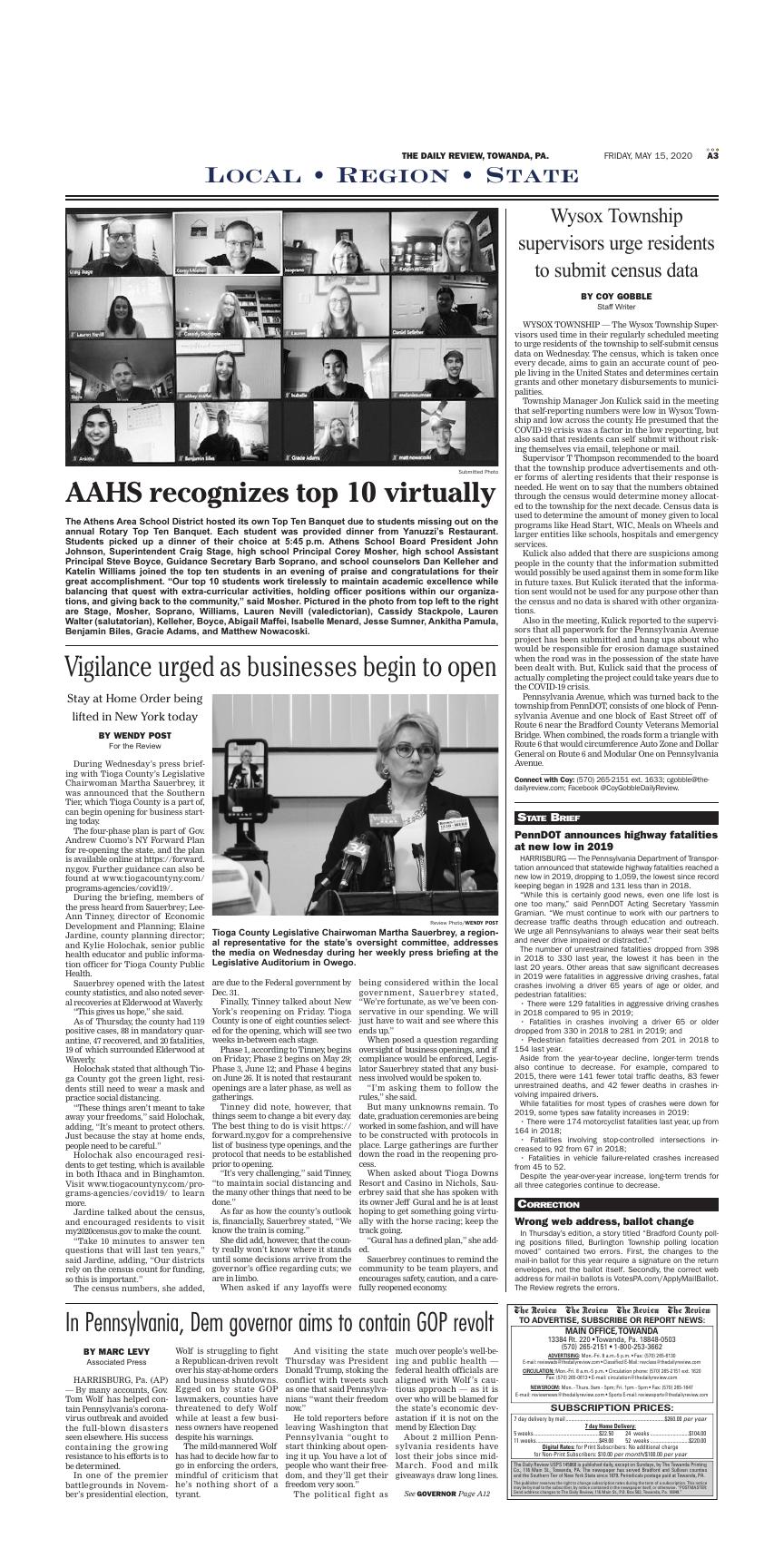 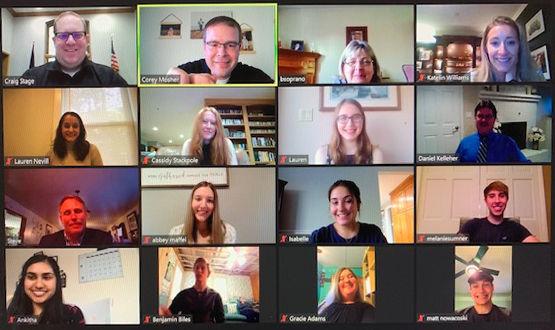 Tioga County Legislative Chairwoman Martha Sauerbrey, a regional representative for the state’s oversight committee, addresses the media on Wednesday during her weekly press briefing at the Legislative Auditorium in Owego.

During Wednesday’s press briefing with Tioga County’s Legislative Chairwoman Martha Sauerbrey, it was announced that the Southern Tier, which Tioga County is a part of, can begin opening for business starting today.

The four-phase plan is part of Gov. Andrew Cuomo’s NY Forward Plan for re-opening the state, and the plan is available online at https://forward.ny.gov. Further guidance can also be found at www.tiogacountyny.com/programs-agencies/covid19/.

Sauerbrey opened with the latest county statistics, and also noted several recoveries at Elderwood at Waverly.

“This gives us hope,” she said.

As of Thursday, the county had 119 positive cases, 88 in mandatory quarantine, 47 recovered, and 20 fatalities, 19 of which surrounded Elderwood at Waverly.

Holochak stated that although Tioga County got the green light, residents still need to wear a mask and practice social distancing.

“These things aren’t meant to take away your freedoms,” said Holochak, adding, “It’s meant to protect others. Just because the stay at home ends, people need to be careful.”

Holochak also encouraged residents to get testing, which is available in both Ithaca and in Binghamton. Visit www.tiogacountyny.com/programs-agencies/covid19/ to learn more.

Jardine talked about the census, and encouraged residents to visit my2020census.gov to make the count.

“Take 10 minutes to answer ten questions that will last ten years,” said Jardine, adding, “Our districts rely on the census count for funding, so this is important.”

The census numbers, she added, are due to the Federal government by Dec. 31.

Finally, Tinney talked about New York’s reopening on Friday. Tioga County is one of eight counties selected for the opening, which will see two weeks in-between each stage.

Phase 1, according to Tinney, begins on Friday; Phase 2 begins on May 29; Phase 3, June 12; and Phase 4 begins on June 26. It is noted that restaurant openings are a later phase, as well as gatherings.

Tinney did note, however, that things seem to change a bit every day. The best thing to do is visit https://forward.ny.gov for a comprehensive list of business type openings, and the protocol that needs to be established prior to opening.

“It’s very challenging,” said Tinney, “to maintain social distancing and the many other things that need to be done.”

As far as how the county’s outlook is, financially, Sauerbrey stated, “We know the train is coming.”

She did add, however, that the county really won’t know where it stands until some decisions arrive from the governor’s office regarding cuts; we are in limbo.

When asked if any layoffs were being considered within the local government, Sauerbrey stated, “We’re fortunate, as we’ve been conservative in our spending. We will just have to wait and see where this ends up.”

When posed a question regarding oversight of business openings, and if compliance would be enforced, Legislator Sauerbrey stated that any business involved would be spoken to.

“I’m asking them to follow the rules,” she said.

But many unknowns remain. To date, graduation ceremonies are being worked in some fashion, and will have to be constructed with protocols in place. Large gatherings are further down the road in the reopening process.

When asked about Tioga Downs Resort and Casino in Nichols, Sauerbrey said that she has spoken with its owner Jeff Gural and he is at least hoping to get something going virtually with the horse racing; keep the track going.

“Gural has a defined plan,” she added.

Sauerbrey continues to remind the community to be team players, and encourages safety, caution, and a carefully reopened economy.

WYSOX TOWNSHIP — The Wysox Township Supervisors used time in their regularly scheduled meeting to urge residents of the township to self-submit census data on Wednesday. The census, which is taken once every decade, aims to gain an accurate count of people living in the United States and determines certain grants and other monetary disbursements to municipalities.

Township Manager Jon Kulick said in the meeting that self-reporting numbers were low in Wysox Township and low across the county. He presumed that the COVID-19 crisis was a factor in the low reporting, but also said that residents can self submit without risking themselves via email, telephone or mail.

Supervisor T Thompson recommended to the board that the township produce advertisements and other forms of alerting residents that their response is needed. He went on to say that the numbers obtained through the census would determine money allocated to the township for the next decade. Census data is used to determine the amount of money given to local programs like Head Start, WIC, Meals on Wheels and larger entities like schools, hospitals and emergency services.

Also in the meeting, Kulick reported to the supervisors that all paperwork for the Pennsylvania Avenue project has been submitted and hang ups about who would be responsible for erosion damage sustained when the road was in the possession of the state have been dealt with. But, Kulick said that the process of actually completing the project could take years due to the COVID-19 crisis. 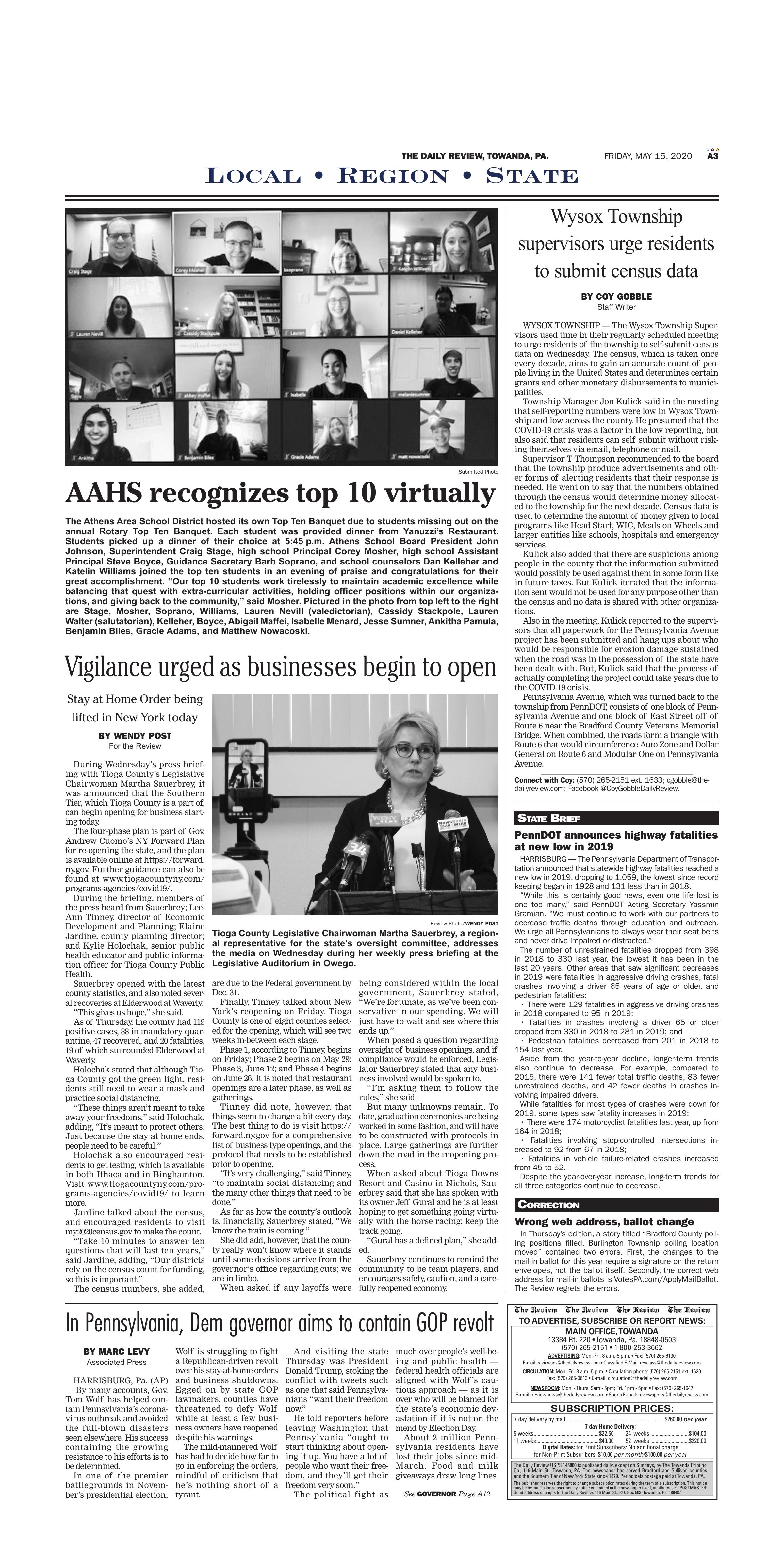