Participants test their skills in the cornhole tournament Saturday as part of the Fifth Annual Towanda Rotary Wine and Beer Festival at Mountaineer Park. 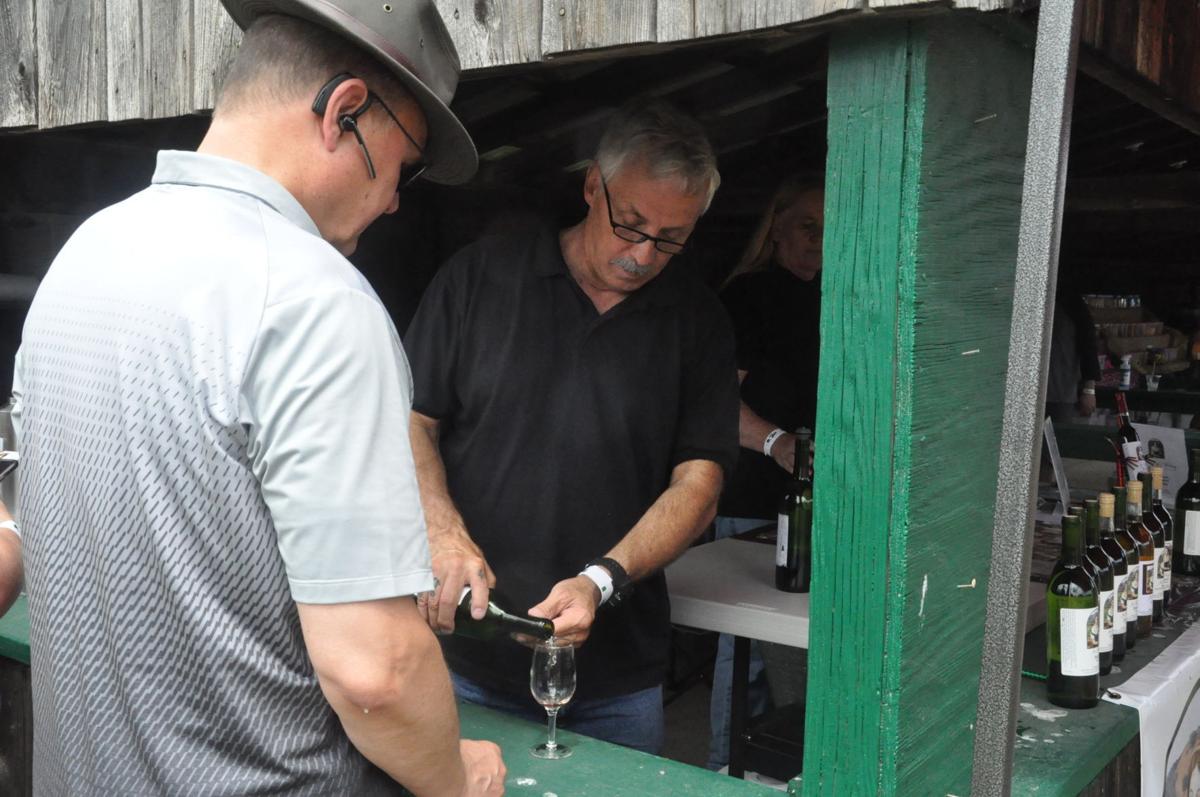 Bob O’Krogly, a wine maker at Joe Perry’s Winery in Troy along with his wife Terrie (not pictured), pours a selection for Jeffrey Hundman Saturday during the Fifth Annual Towanda Rotary Wine and Beer Festival at Mountaineer Park.

Participants test their skills in the cornhole tournament Saturday as part of the Fifth Annual Towanda Rotary Wine and Beer Festival at Mountaineer Park.

Bob O’Krogly, a wine maker at Joe Perry’s Winery in Troy along with his wife Terrie (not pictured), pours a selection for Jeffrey Hundman Saturday during the Fifth Annual Towanda Rotary Wine and Beer Festival at Mountaineer Park.

MONROETON — At one end of the Mountaineer Park grounds, bean bags flew as people tried to hit the mark as part of a cornhole tournament. At the other end, music played as many made their way through the wine, beer, and food vendors populating the Fifth Annual Wine and Beer Festival Saturday.

Each year, the event serves as a fundraiser for both the Towanda Rotary Club and the Bradford County YMCA. Originally planned for May, this year’s festival had to be delayed due to COVID-19.

YMCA board member Doreen Secor said she was excited that they could finally hold the event — and in accordance with state guidance on crowds and social distancing. This included limiting ticket sales and, in the case of the cornhole tournament, adding some distance between the sets of game boards.

Masks were also available and sanitizing stations were placed throughout the venue.

“It gives multiple opportunities for the people that are here to enjoy the day safely,” said Towanda Rotary Club President Ryan Ross.

As part of this year’s festival, the Towanda Rotary Club held a 100th anniversary celebration that included state Rep. Tina Pickett (R-110), Rotary district leadership, and some other special guests.

Ross highlighted the various community endeavors the club currently helps with, from the YMCA — including an upcoming pool day — to sponsoring a little league team and cub scout pack, helping those out of work due to COVID-19 through donations to local food pantries, and even the flowers that line the Veterans Memorial Bridge.

The Towanda Rotary Club also holds the Top 10 Banquet each year for the Towanda High School’s highest achievers. When it had to be cancelled this year, the district and Rotary partnered to deliver each student a gift basket including a gift card to replace the meal they would have received otherwise, as well as the traditional clock.

“We wanted our top 10 students to at least feel like they were still a part of what was going on,” said Ross, later adding, “It was a very long afternoon and it was hot that day, but we made it work.”

Typically, Ross said money raised through the Wine and Beer Festival helps support the local Rotary Youth Exchange program, but it was cancelled for the upcoming school year due to COVID-19.

At the YMCA, money brought in Saturday will help replace the old gymnasium floor and go toward other capital improvements, according to Secor.

Both Secor and Ross thanked everyone who came out to support both organizations.

“Without the public’s support, neither of those organizations would be able to be operational and put their money back into the community,” Secor said while also recognizing the Monroe Hose Company for providing the grounds and volunteers to help with Saturday’s festivities.

Ross invited anyone interested in Rotary to stop by one of their meetings. They meet at 12:05 p.m. each Monday at Woody’s Ale House and Grille on Main Street in Towanda.

What is your favorite pizza topping?