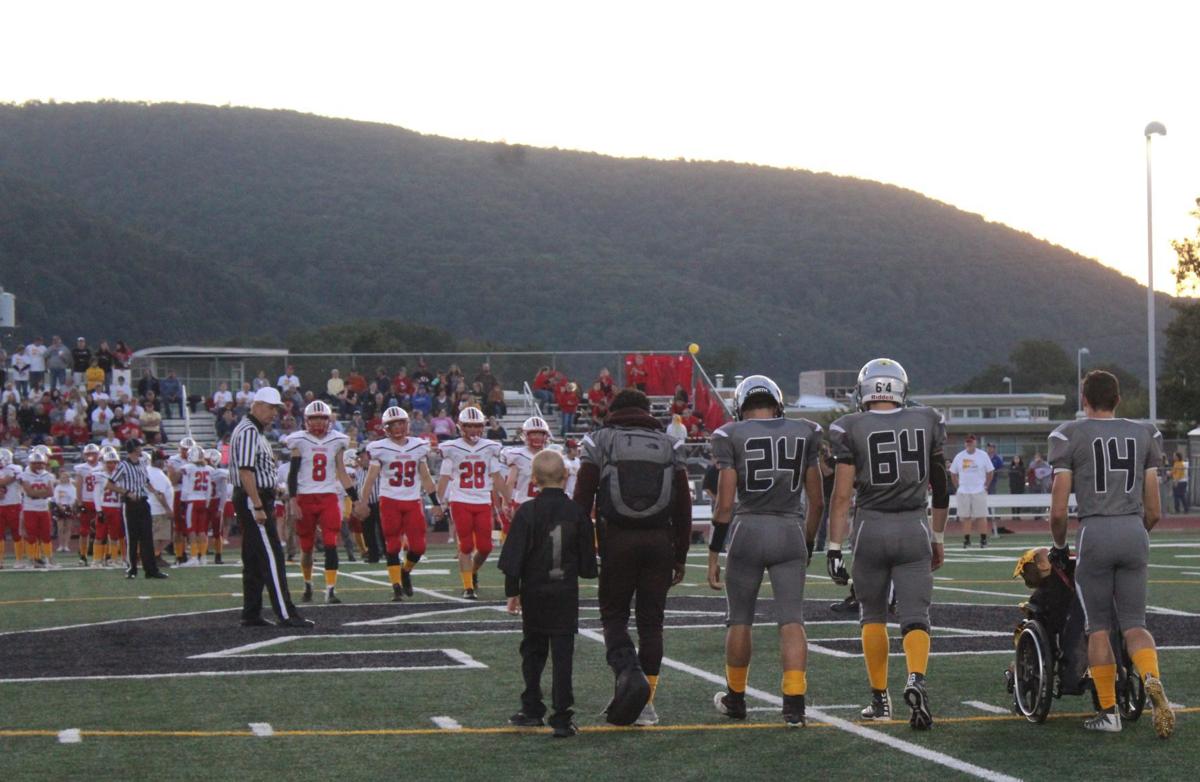 Seeley Carlin and Ariah Cooke joined the captains of the Athens Wildcats and Canton Warriors for the coin toss at Friday’s Gold Out Game. 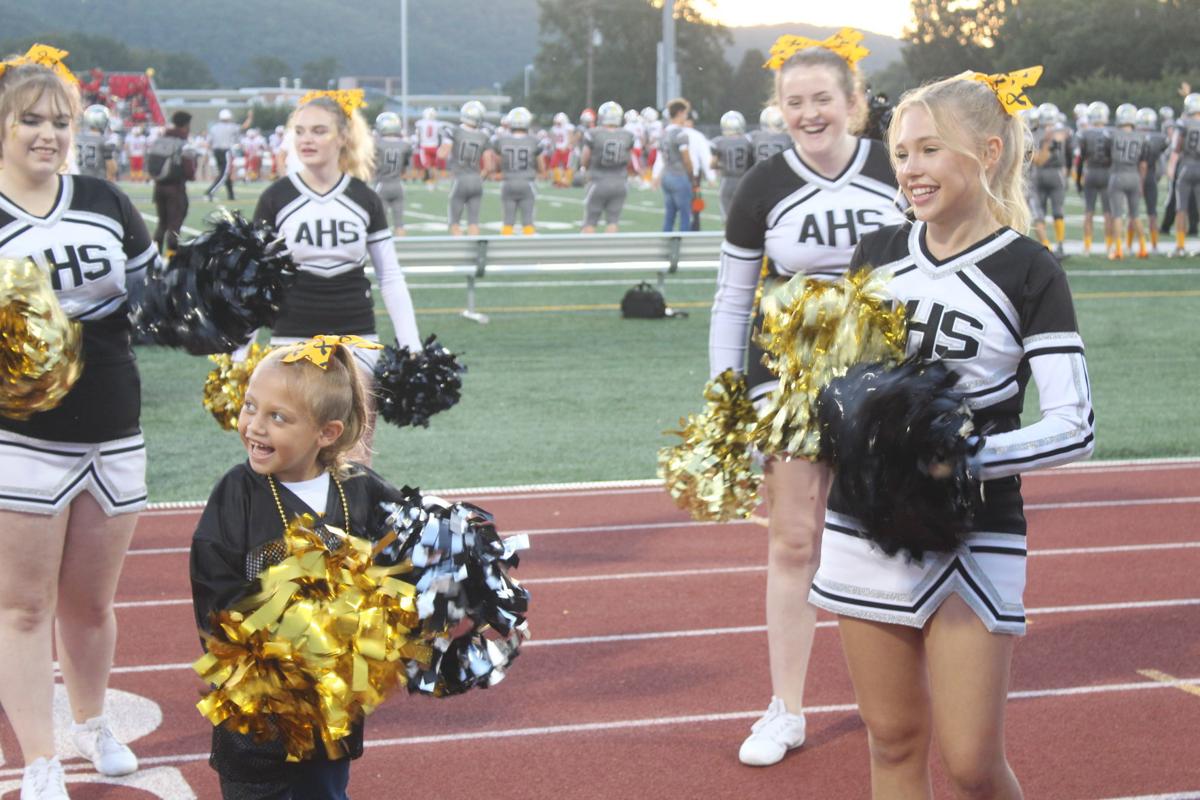 Ariah Cooke cheered with Athens Wildcat cheerleaders for part of the Gold Out Game. 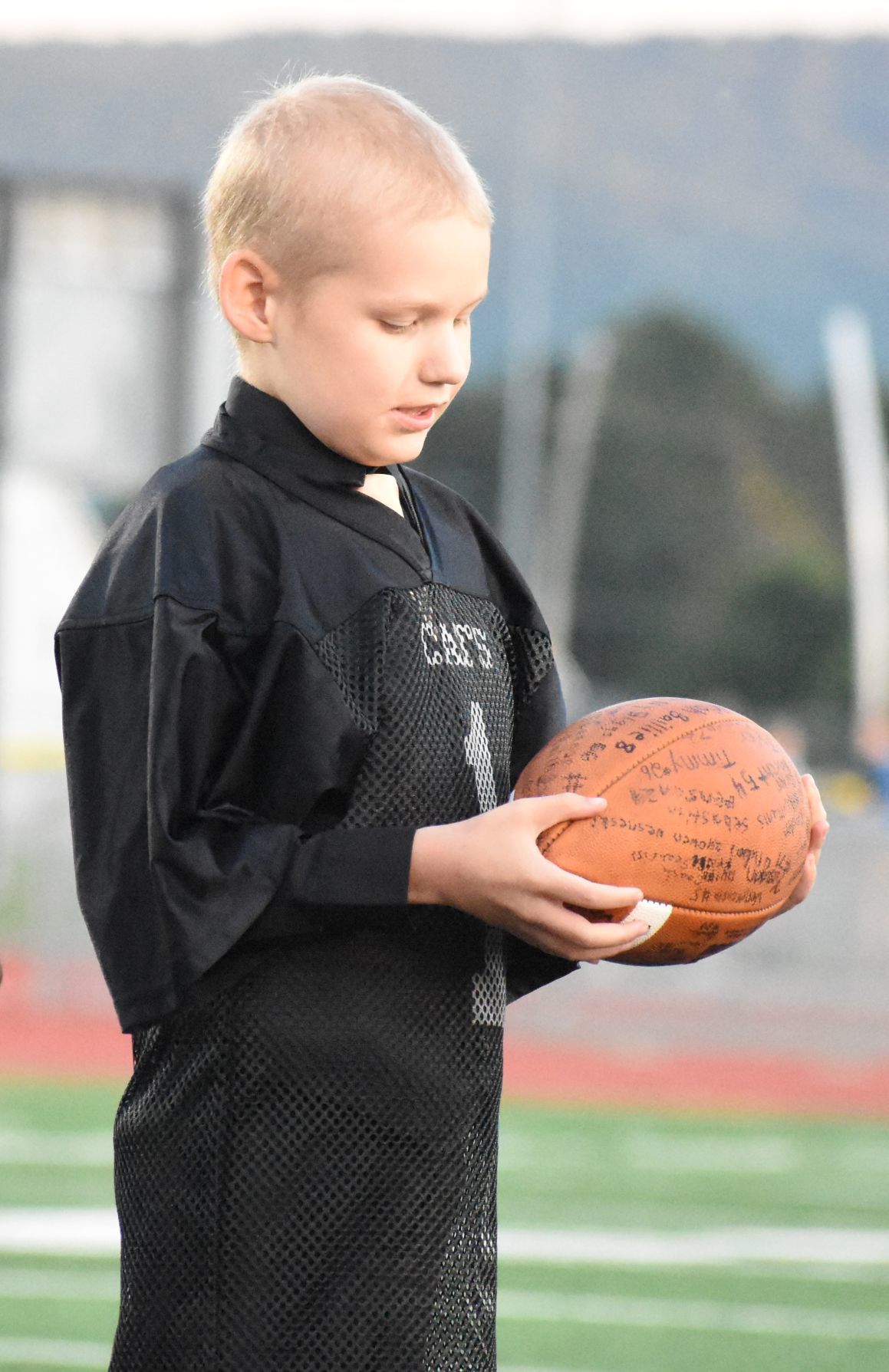 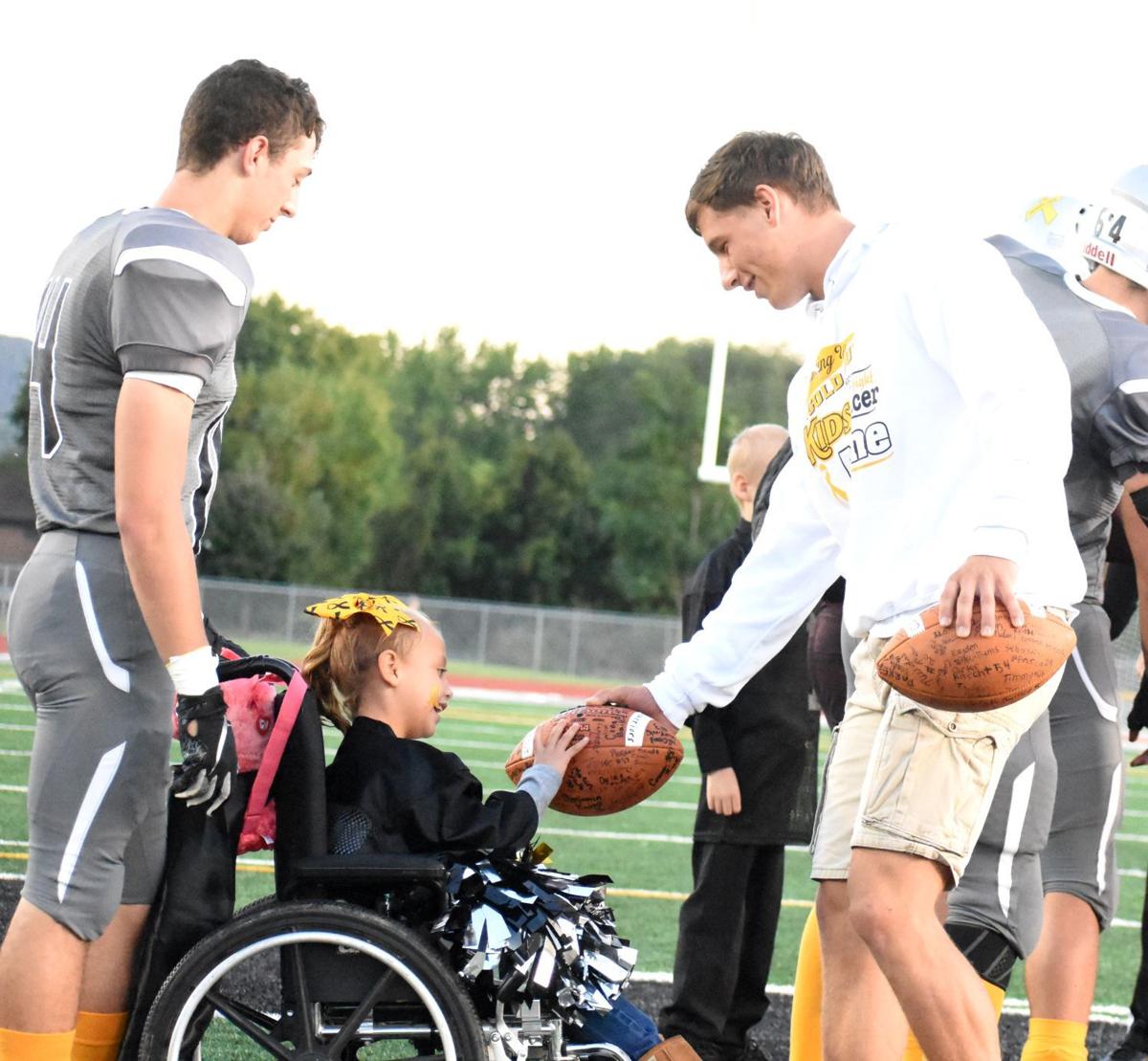 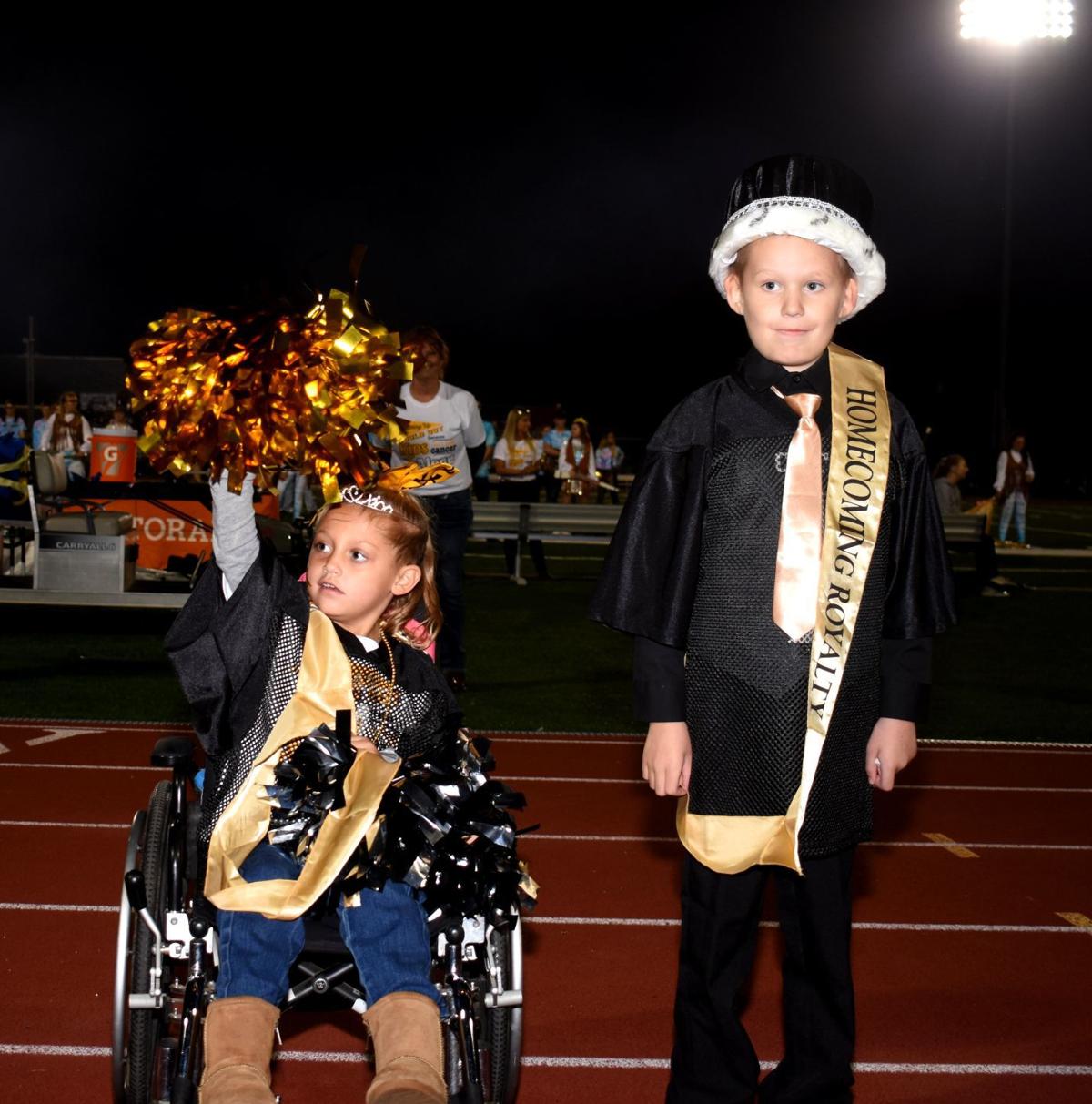 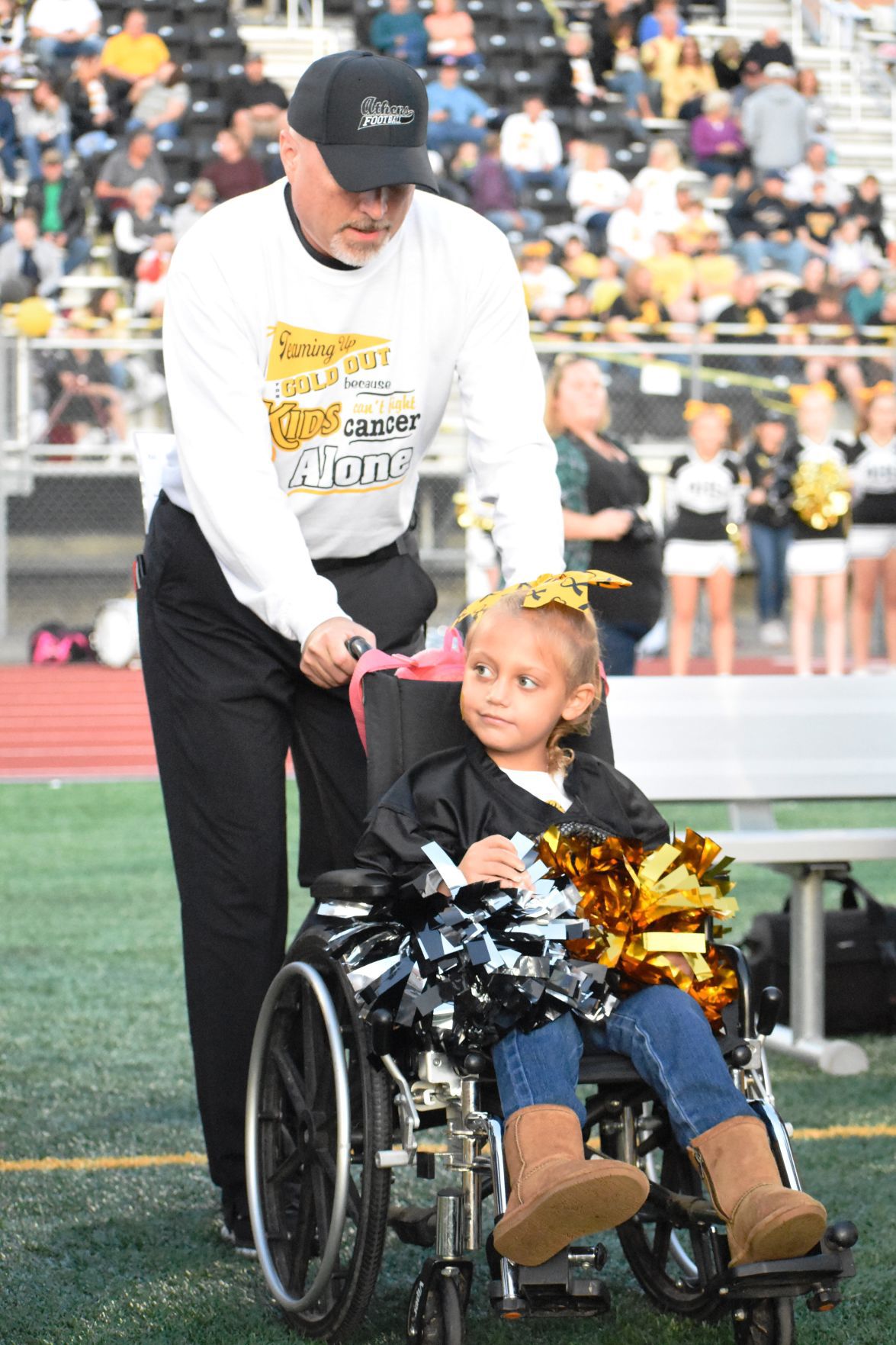 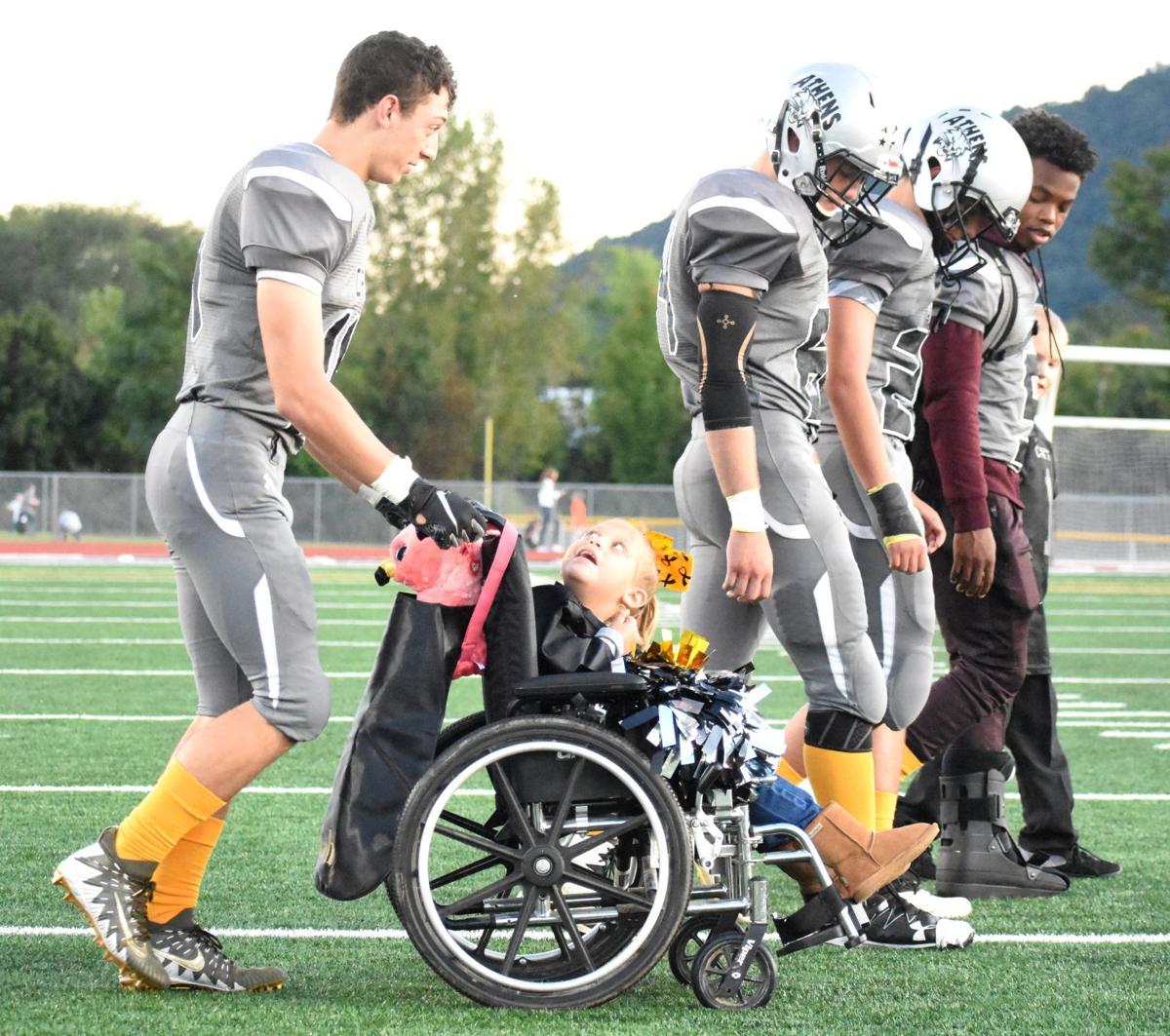 Seeley Carlin and Ariah Cooke joined the captains of the Athens Wildcats and Canton Warriors for the coin toss at Friday’s Gold Out Game.

Ariah Cooke cheered with Athens Wildcat cheerleaders for part of the Gold Out Game.

ATHENS — As captains of the Athens Wildcat football team walked to the center of the field for the coin toss against the Canton Warriors Friday night, they were joined by two special guests — Ariah Cooke and Seeley Carlin.

Small but mighty Cooke and Carlin, both elementary students in Athens Area School District, were the spotlight of a game that transformed from Athens’ Homecoming into a multi-school, multi-community effort to support the kids in their fight against childhood cancer.

The Gold Out Game brought teams and communities together in waves of white and gold T-shirts, gold and black pom-poms and ribbons, gold balloons and even golden decals placed on the helmets of not only Athens and Canton football players but also every football team in Bradford County, along with two teams in Tioga County, as they played their own games.

All proceeds from merchandise sales, a raffle, a penny war between Canton and Athens districts, a bake sale at the game and admission donations were to be donated to Carlin and Cooke’s families.

Local businesses and individuals also gathered, pitching in in their own ways to raise money for the families — be it through making donations to raffles, organizing bake sales themselves or purchasing T-shirts for their staff.

Though a total was not yet calculated Friday night, approximately $4,750 was raised through T-shirt sales, $1,080 through helmet decals, and $5,371.15 through the penny war which was won by Athens.

At half time, a group of honored guests who had overcome cancer themselves presented the Athens Homecoming Queen with gold roses and a gold balloon release was hosted afterward in honor and memory of those who have battled the disease.

Trivia facts about childhood cancer were also read over the loudspeaker throughout the Gold Out Game.

“It has been amazing, very overwhelming, amazing, beautiful, all of the good words you can think of honestly, scary, it really has been great, it really has, the community support is unbelievable,” told co-organizer Michelle Ward, mother of Timmy Ward, a Canton football player who overcame cancer last year.

Ward stated that at the beginning of planning the event, organizers ordered 500 T-shirts hoping to be able to sell all of them and ended up selling 950 and having to turn would-be buyers away.

“I didn’t expect it to get that big but it doesn’t surprise me that it got that big. Our area is so giving and all of us know each other. I don’t care if you’re from Towanda, Canton, Wyalusing, we all have friends all over the county so everybody knows everybody and not only that, childhood cancer is all over. It has affected somebody, somewhere in our county. It is well more prevalent than people would like to realize,” said co-organizer Tracey Weldy, mother of Cora Weldy, a Troy student that has overcome cancer.

Ward explained that Carlin and Cooke also participated in the first annual Rally in the Valley where they rode in Athens’ homecoming parade and were named Honorary Jr. Homecoming King and Queen.

“Their little faces, they were so excited, it was adorable and yes, the whole community has just scooped them right up, it’s awesome,” she said.

“I’m not crying, you’re crying,” stated Weldy. “I’m just so happy for them that they’re (Cooke and Carlin) getting this, I’m so happy for her that she’s getting this experience and I can’t even.”

Ward noted that experiencing the game from the position of having a survivor son allowed her even more perspective as to what it is like for a family to watch their community support them as she was not able to attend a wrestling match that was held to raise money for their family last winter due to being with Timmy in the hospital.

“People are amazing, they really are,” she stated.

Weldy explained that as the mother of a survivor herself, watching the Gold Out Game was “humbling” and that she was glad that not only would it benefit Carlin and Cooke but also serve as a healing event for other survivors in the crowd, families from as far as Wellsburg that had been impacted by childhood cancer.

Football is a favorite fall pastime in Bradford County, one often passed down through generations, enjoyed by the young and young at heart under Friday night lights.

Players, coaches, families, and kids joined Friday to show that the simple pastime can be used for so much more, that Bradford County cares and that “no kid can fight cancer alone” — and none of them need to.