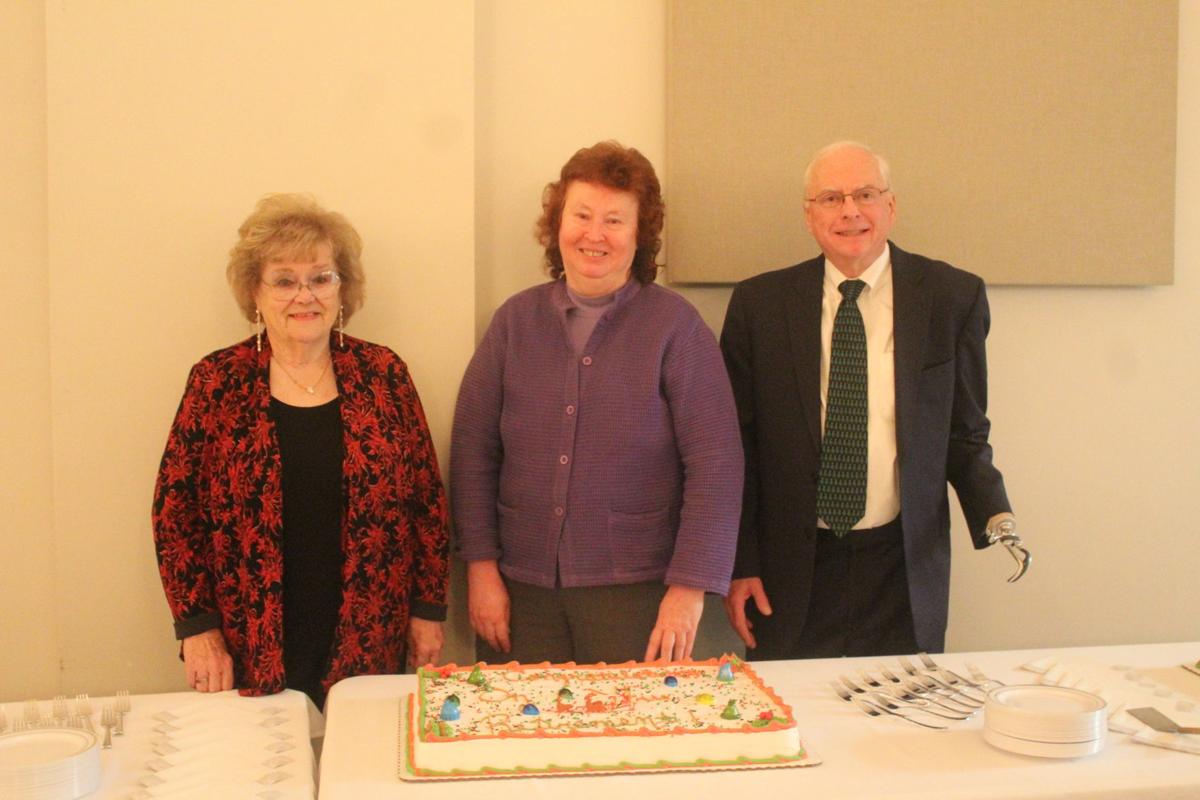 Shirley Rockefeller, Rebecca Clark and Daniel Barrett are shown at their county retirement party at Alparon Park in Troy on Friday night. 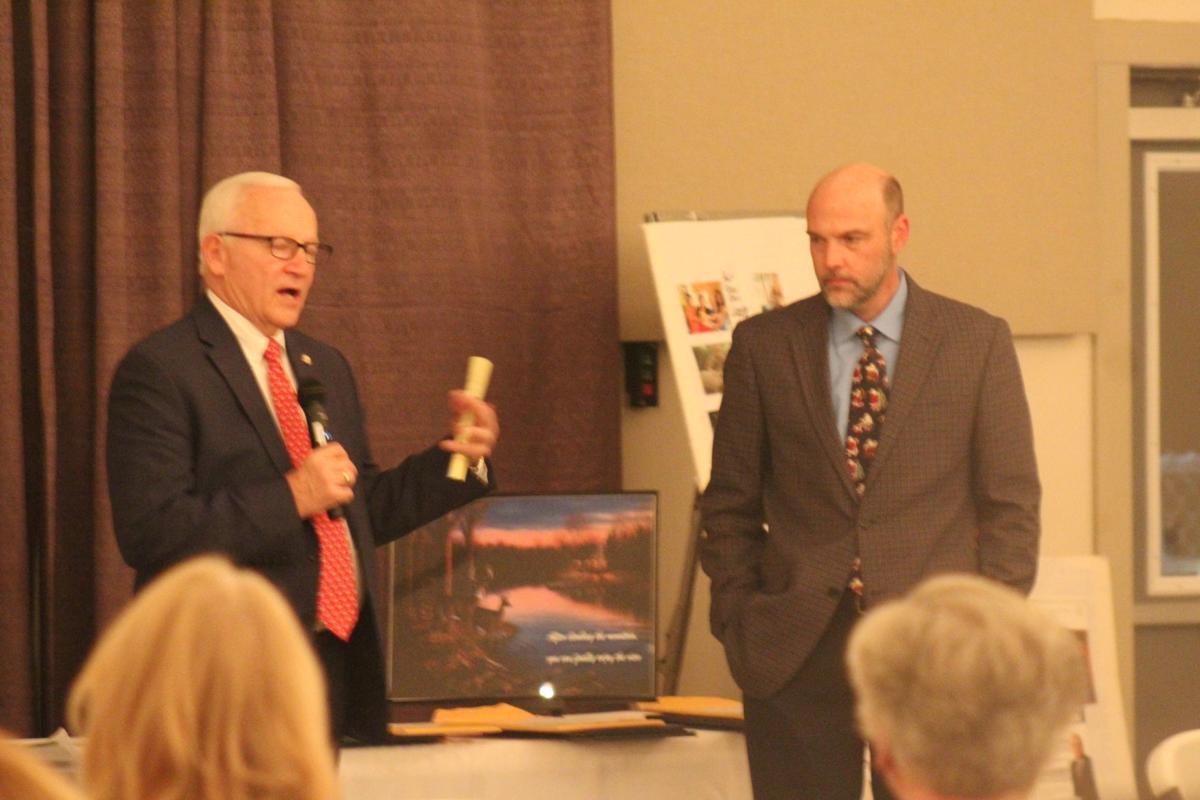 Shirley Rockefeller, Rebecca Clark and Daniel Barrett are shown at their county retirement party at Alparon Park in Troy on Friday night.

With arguably 100 years of combined public service District Attorney Daniel Barrett Esq., Bradford County Treasurer Rebecca Clark and Bradford County Recorder/Register/Clerk of the Orphan’s Court Office Shirley Rockefeller were honored with a night of dinner, cake and recognition of their accomplishments and dedication to local people.

As Barrett reflected on his career, he highlighted decades of changes, challenges and faith in God.

Barrett, who had his first encounter with the office of the District Attorney after becoming the youngest man to hold the position in Bradford County history when he was elected into the then part-time position in 1983.

Barrett said that after serving as DA in the part-time capacity until 1988 and “with a family to raise and educate” he “couldn’t consider returning to the DA’s office” from 1988 until 2007 and instead operated his own private law practice.

In 2005 the position of DA was designated to be full time and Barret ran in the 2007 election and was nominated by both parties.

Barrett noted that over his time presiding as Bradford County’s District Attorney he tried many murder and sexual crime cases, dealt with increased crime that came with the “gas boom”, prosecuted through the “bath salt crisis” and ongoing opioid epidemic and even witnessed a 2011 case be written into a Law and Order SVU episode.

Barrett was named the oldest DA in Bradford County history in 2018 and also stated that he had a front row seat to many technological advances in the court room including the introduction of “black box” evidence, the first of of video-transmitted toxicology testimony, and first use of drone aircraft photographs in trial.

“I thank every person in Bradford County because it’s been a real honor to serve you,” he said.

Barrett told of his grandfather’s lessons from the Biblical book of Ecclesiastes, that “there is a time for every purpose under Heaven” and thanked God for his wife, coworkers and others and that “times have gone very, very well.”

Clark began working with the county in January 1988, and knew the first day there that “I had found my home.”

Now, with 32 years of service coming to a close at the end of the year, including 19 years as the county’s treasurer, Clark says she has enjoyed her time.

“There’s something different to learn every day,” she explained. “On the treasurer’s side, there’s different seasons that we go through. There’s a dog license season, a hunting season, a fishing season. And then, of course, there’s the tax collection. Basically I’ve just enjoyed the work. I’ve never been inclined to look elsewhere.”

Late last year, Clark announced that she would not be running for re-election.

“I just felt it was time to move on, just time to relax, enjoy life, and take it easy,” she said.

Looking back on her career, one of Clark’s proudest moments was when she was named president of the Pennsylvania State Treasurer’s Association in 2016, becoming the first treasurer from Bradford County to achieve the honor.

“It’s very humbling to get elected to a position like that,” she said, adding that it was a year that went by quickly.

With Bradford County Auditor Matthew Allen set to take over the treasurer’s office following November’s election, Clark encouraged her successor to be his own person and make decisions independently, “which I know he will,” and to just be a hands-on treasurer.

“That’s what it takes to be successful, I feel,” said Clark.

“I’ve enjoyed my entire time here,” she added, “and am proud that I’ve been able to work with all of the different people that I’ve needed to work with.”

Rockefeller rounded out the team of retirees being honored as she has served in the Recorder/Register/Clerk of the Orphan’s Court Office since 1965.

Rockefeller stated that during her time in office she has witnessed a large leap in technological advancements with the introduction of the computer.

“We’ve accomplished so much and so (many) changes since I’ve been here,” she said.

Rockefeller recalled times when reporters would need to spend time at the courthouse copying records by hand, something she said she “can’t imagine” in today’s society and noted that the integration of computers offered ease in many areas.

Rockefeller told that her favorite part of her position has simply been “helping people” however.

President Judge Maureen Beirne issued an order for all three retirees “to have joy in whatever brings you joy the rest of your days and your retirement and I wish you personally many, many blessings” as well.

“I have been welcomed into their offices, they have been open and honest with the advice they have given me, we don’t always agree...but it’s always been a joy for me, and I really appreciate that and I know a lot of the foundation of our county and our county governments rests on your experience, the three of you,” stated Bradford County Commissioner.