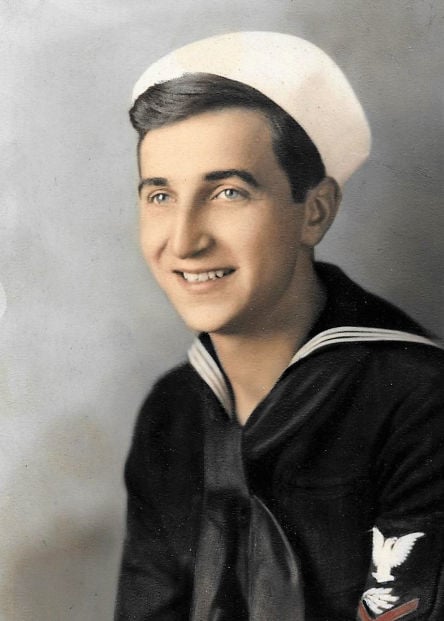 Pearl Harbor veteran Edward Stone, a Towanda native, is pictured after enlisting in the U.S. Navy. 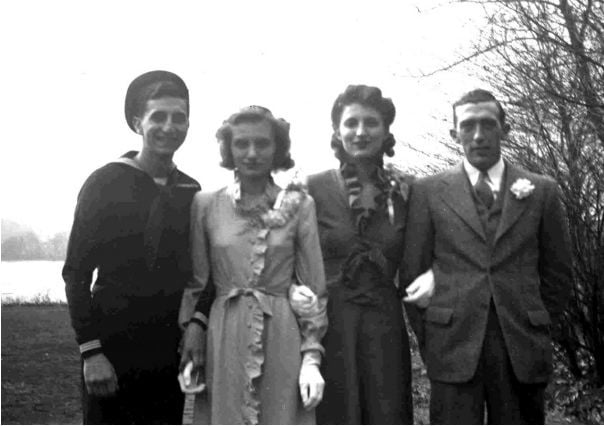 Ed and Eleanor Stone are pictured with Marge Ennis, the maid of honor in their wedding, and Francis Moger, the best man. 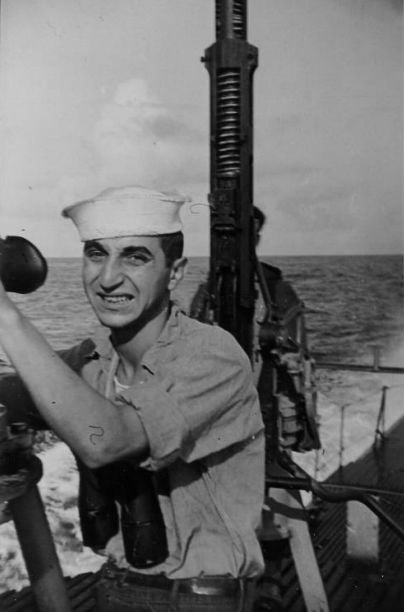 Pearl Harbor veteran Ed Stone is pictured during his time of service. 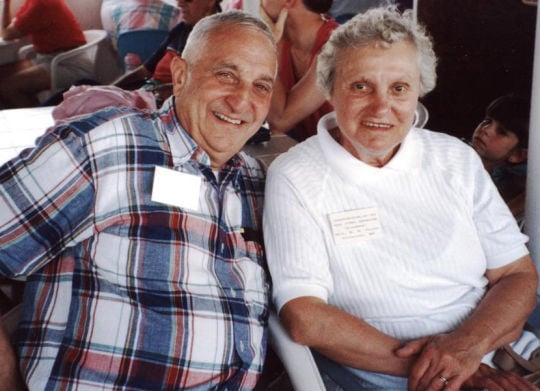 Ed and Eleanore Stone are pictured during a military reunion in Charleston, South Carolina. 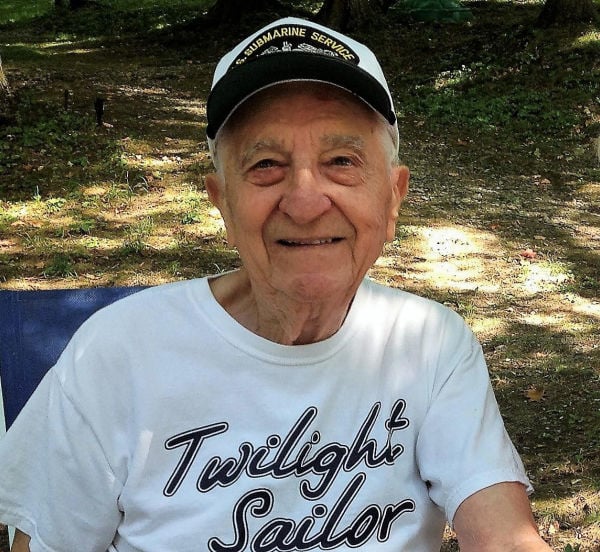 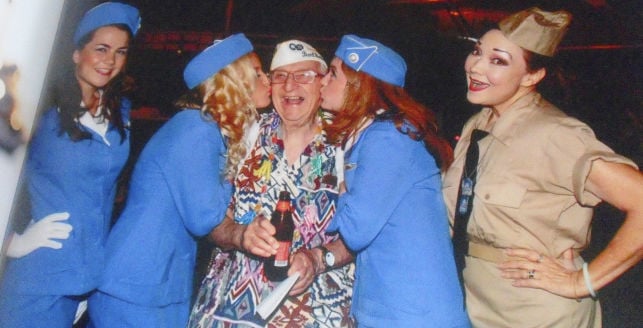 Ed Stone receives some kisses while visiting Hawaii in 2014. 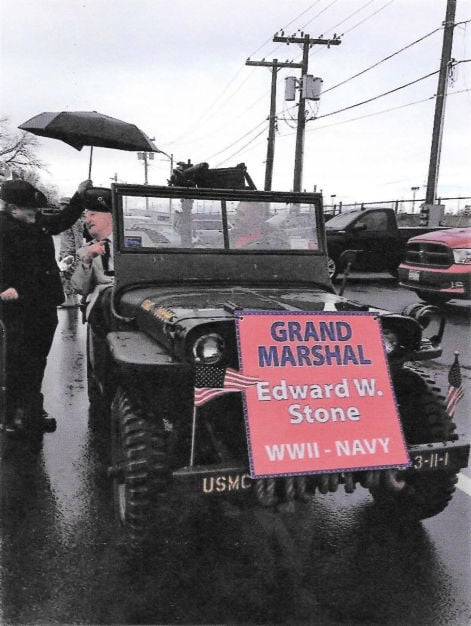 Ed Stone makes his way down the Veterans Day Parade route at the New York State Fairgrounds as grand marshal. 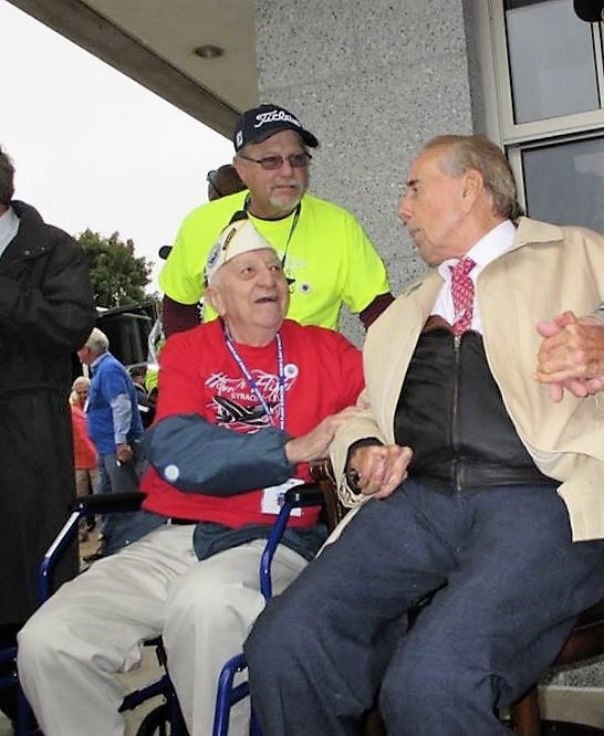 Ed Stone and his son David talk with Bob Dole.

Pearl Harbor veteran Edward Stone, a Towanda native, is pictured after enlisting in the U.S. Navy.

Ed and Eleanor Stone are pictured with Marge Ennis, the maid of honor in their wedding, and Francis Moger, the best man.

Pearl Harbor veteran Ed Stone is pictured during his time of service.

Ed and Eleanore Stone are pictured during a military reunion in Charleston, South Carolina.

Ed Stone receives some kisses while visiting Hawaii in 2014.

Ed Stone makes his way down the Veterans Day Parade route at the New York State Fairgrounds as grand marshal.

Ed Stone and his son David talk with Bob Dole.

On Dec. 7, 1941 — almost a year to the day from his enlistment in the U.S. Navy — Towanda native Edward Stone was starting his morning shift in the radio room of the USS Pyro when the man he had relieved just five minutes earlier came running back.

“Look at these funny looking planes out here!” Stone remembers his shipmate saying. “When I ducked down and looked out of the radio room door, if those planes were 100 feet off the water banking around, that would have been high. They were torpedo planes ready to go in on battleship row to drop their torpedoes.”

Stone guesses that he was among the first to spot the Japanese bombers in the infamous Pearl Harbor attack that ultimately left 2,403 service members and civilians dead and nearly 1,200 injured.

The guns on board on his ship, which dated back to World War I, wouldn’t point above 30 degrees, and exposed about a dozen men to enemy fire to even operate, so the men were called back to their normal duties.

“As soon as I got to the radio room door and opened the door — boom! An armor-piercing bomb that missed us by 12 feet caused a concussion, it caused a break in the steam line, and we lost the ship’s power for a few minutes,” he continued. “I was ordered immediately to get the old emergency radio generator going up on the boat deck.”

According to Stone, the generators normally sat unused for long times and therefore required several cranks by hand to get them running once again. However, the crew ran the generator the day before as part of an inspection, so it started right up for Stone.

That afternoon, as Stone stood ready with his 30-06 rifle, a first lieutenant called him to the boat deck to show him something.

“As we were going to the top of the ladder, he said, ‘I was on the bridge and we were being strafed, and that pilot had you right in his sights.’ In fact, he was showing me as I was running to get that emergency radio generator going, that pilot was trying to shoot me and I didn’t have any idea. I was running ahead of the bullets.”

The USS Pyro was also involved in the Battle of Midway about six months later where they supplied the destroyers.

“In fact, I went all the way through World War II and didn’t get a scratch. How about that?” he added.

Although Stone has called the Syracuse area home for close to 70 years now, he has come back to Towanda several times, mostly to visit family, and continues to reflect on his old hometown with much fondness — although times weren’t always easy.

It was in the sixth grade, at the Second Ward school, that Stone first met the girl who would become his wife of 62 years, Eleanor Ennis. He said they never dated during high school, but were in the same social group until she moved to the Altoona area during their senior year. Stone reconnected with her during his Navy leave in 1942. She passed away 14 years ago.

It was also in the sixth grade that Stone lost his mother to tuberculosis, leaving him and his older brother Hadley in the guardianship of Universalist Church minister James Herrick and his wife, who were in their 70s. Stone said his sixth grade teacher, Miss Fox, was a great help during this time.

“She was one of the best teachers I ever had,” he said.

After several years, Stone and his brother ended up in the guardianship of their mother’s bank, Citizens National Bank.

“Every time I needed a pair of shoes, clothes, or something, I had to go see the president of the bank,” said Stone. “He was primarily interested in the finances, but he did sign for me to go into the Navy after I graduated school.”

Stone had become more focused on a possible future in the Navy during high school when, as a drummer who had been playing around the area with a dance band, the cost of buying his own drum set and joining a union to get more gigs — essentially taking his musicianship to the next level — seemed too expensive. Through his interest in the Navy, Stone began learning Morse Code, and was helped along the path of achieving his amateur radio license from family friend Cecile Kahn.

Before Stone could enlist in the Navy following high school graduation in 1940, he worked two jobs — as a stock boy for J.J. Newberry’s and at John Jay Moore’s flower shop, soda fountain, and postal telegraph.

On Dec. 1, 1940, Stone was able to begin the enlistment process in Elmira, and then was sent to complete it in Buffalo before beginning training in Newport, Rhode Island.

Stone, who is now 96 years old, stays busy by sharing his stories at the Syracuse area’s schools and organizations.

These are stories about smaller ships such as the USS Shaw, which he said stands as a testament to the quality of Naval operations at Pearl Harbor and Mare Island in California.

The USS Shaw was a destroyer in a floating dry dock that had its bow blown off by an armor piercing bomb. Two months later, the ship was able to travel to Mare Island Naval Ship Yard for repair under its own power, with the USS Pyro as its convoy.

“She was back in May of ‘42 to join the fleet. How about that? That’s why I say that Navy yard, both at Mare Island and at Pearl Harbor, are great. The amount of salvage work that the Navy yard at Pearl did, it was just a tremendous job of salvage. You don’t hear about that stuff,” he said.

Stone has visited Hawaii a dozen times since the end of World War II, including a visit around this time last year. There, he said he and the family members who accompany him are treated like celebrities.

The same is true in the Syracuse area. In fact, in 2015, he served as grand marshal for the Veterans Day parade at the New York State Fairgrounds where he was honored with numerous gifts.

And as Pearl Harbor veterans and their stories become lost to age, Stone feels fortunate to be in good health for his age. He boasts that he is still able to drive, only requires four medications — one being a small daily aspirin, and his doctors are confident that he will reach the 100 mark.

“I’m very fortunate,” Stone exclaimed. “Here I am! You’re talking to me. And my memory is still damn good!”