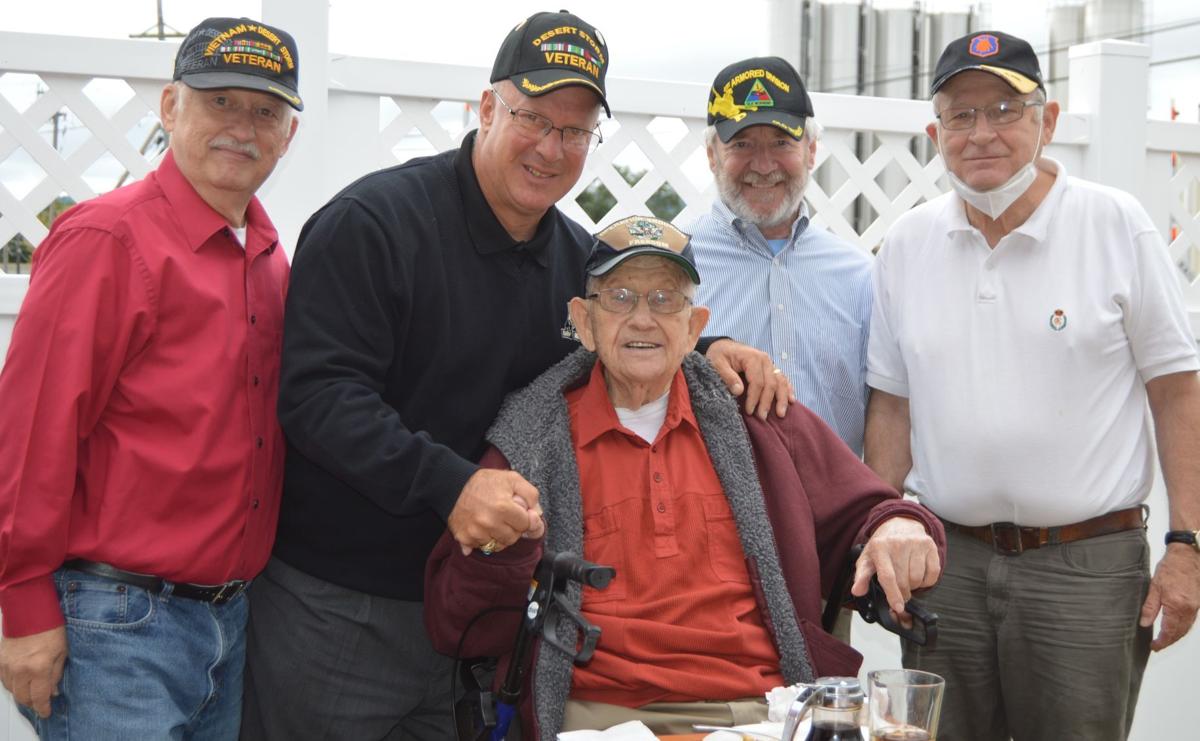 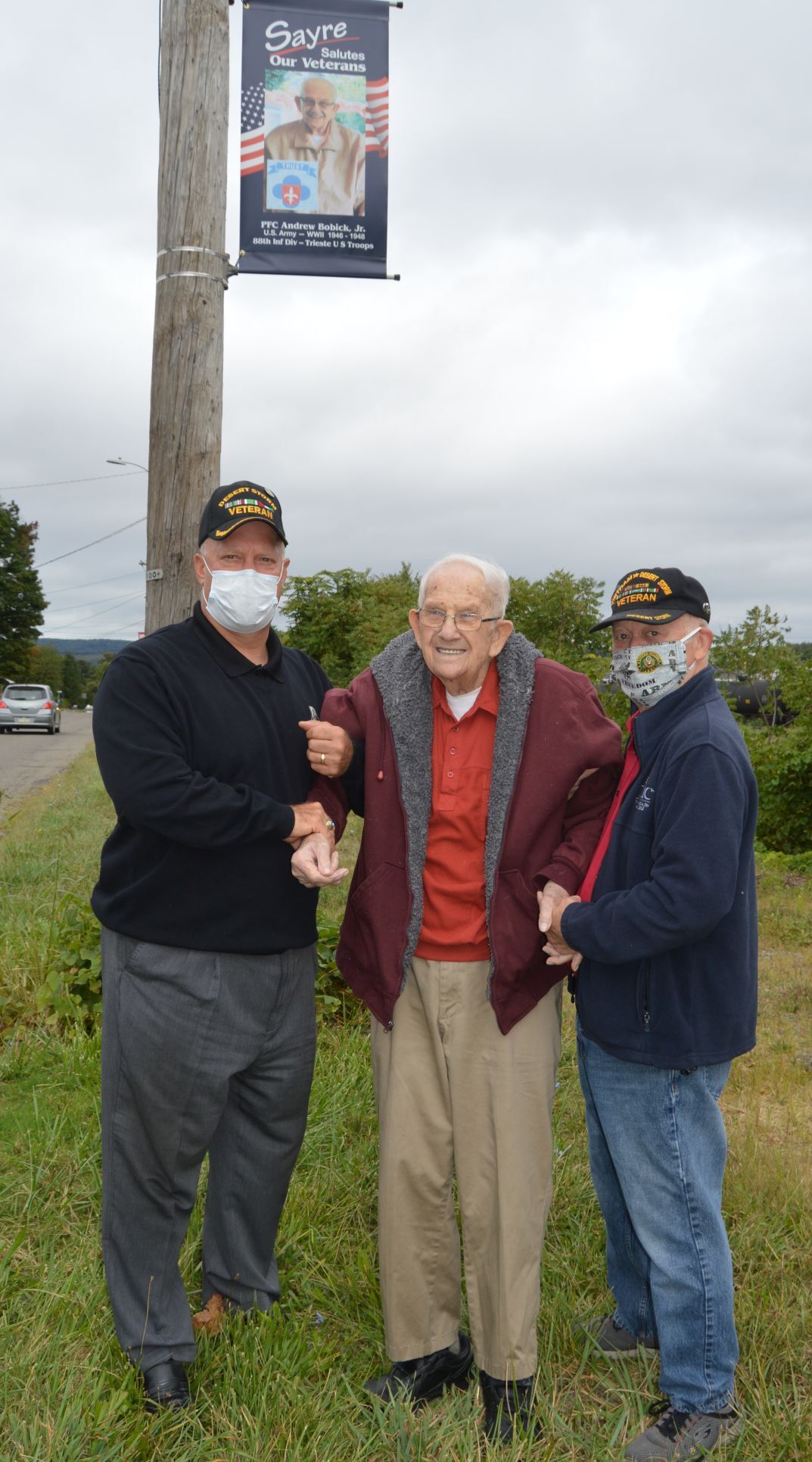 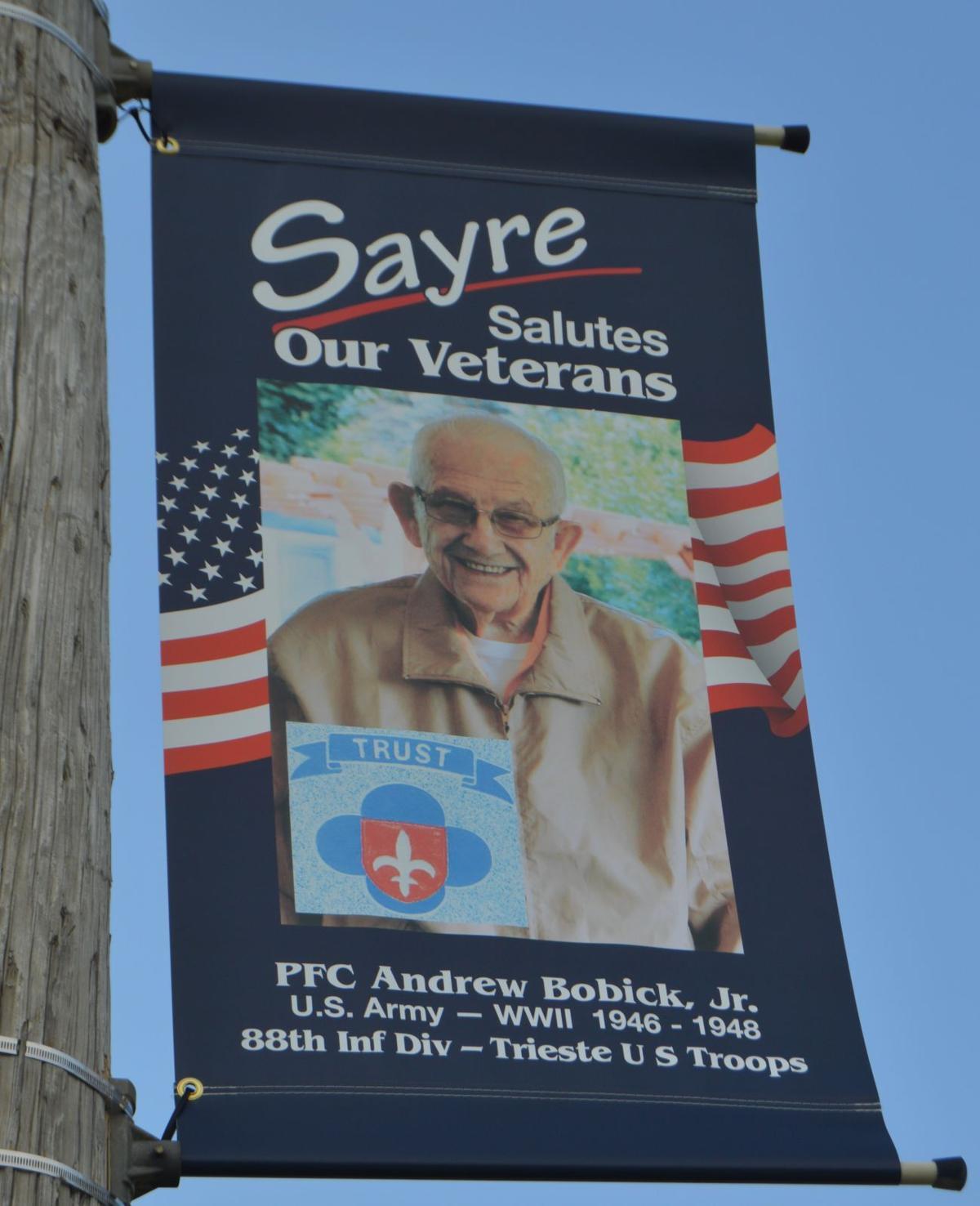 Within the community of veterans, especially wartime deployed vets, there is a strong sense of brotherhood. Among the members of that brotherhood, the highest respect is afforded to the now diminishing number of service members from World War II. It was that intense level of respect that moved three Valley wartime vets to ensure that one of the Valley’s remaining WWII infantrymen got recognized with a surprise Sayre Veterans Banner.

Andrew Bobick, Jr. was a member of the 351st Infantry Regiment of the famed 88th Infantry Division, the “Fighting Blue Devils,” as the second World War ended in Europe. Select units of the 88th were tasked to hold the Morgan Line at the wartime border between Italy and Yugoslavia. Allied commanders were gravely concerned that Marshall Josip Tito, the Yugoslav Communist leader, might make a post-war incursion into Italian territory to occupy the deep-water port city of Trieste. To thwart any such action, the Allies took units from the 88th ID, who were battle hardened after fighting and defeating the Nazis the length of Italy, to be the blocking force.

Private First Class Bobick was one of the soldiers selected for the Trieste mission. The duty was so unique that a special Army acronym and shoulder unit insignia was developed for troops assigned there. That acronym was TRUST, which stood for Trieste United States Troops, and the shoulder patch was the Coat of Arms of Trieste superimposed on the 88th Divisional patch with a TRUST scroll tab across the top. That patch is clearly visible on the corner of Bobick’s Veterans Banner now displayed on Lehigh Avenue, near Allison Street.

Unfortunately, all of Bobick’s Army photos and most of his Army 201 file were lost in the flood of 2011. However, a trio of veterans who wanted to see Bobick honored for his service were able to obtain a cherished family photo, and with the help of Sayre Borough Administrative Coordinator Kandy Ferguson and her Veteran Banner Team, were able to surprise Bobick with a morning reveal on Sept. 11. The Lehigh Avenue event was followed by an outdoor breakfast at Becky’s Diner in Waverly, attended by the three sponsoring vets, George Cowell (Army LTC), Todd Smith (Army CPT) and Daniel Polinski (Army SGM), along with former Bradford County Veterans Coordinator Gene Osmun, who had a long history of working with Bobick.

While Bobick was genuinely surprised and thrilled at the twin morning events, the four men who joined him said that the real honor was theirs.

“Andy’s service, like the service of all World War II vets, is in a league of its own,” said Crowell. “They didn’t just fight to save America; they fought to save the world!”

Gene Osmun agreed and added, “Andy has always downplayed his service. Like so many World War II vets I’ve had the privilege of working with over the years, he just felt that he was doing his duty for his country.”

Seventy-five years after the end of that awful conflict, Bobick has finally been publicly recognized for this part in it.