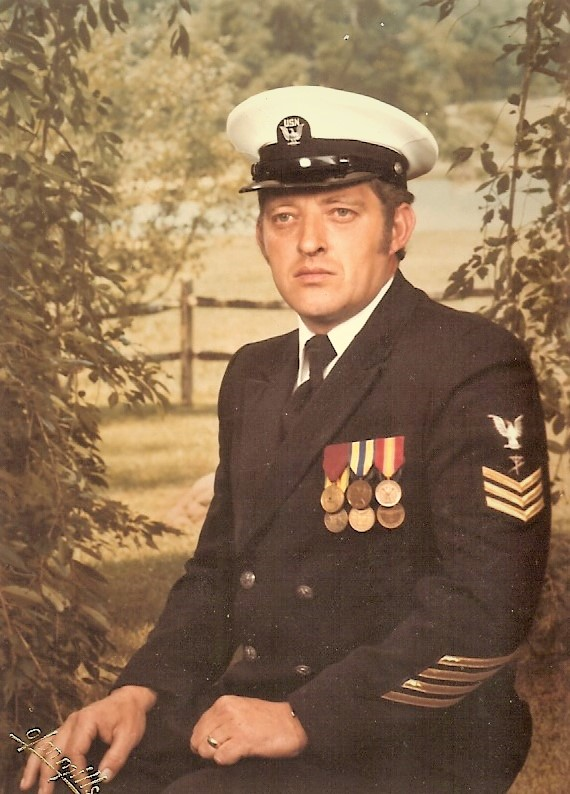 Charles Guy Babcock died unexpectedly Wednesday, 21 April 2021 at Sayre, Bradford, Pennsylvania. He was born in Sayre, Bradford, Pennsylvania to Floyd and Chrysanthemum (Bastion) Babcock on 1 November 1939. At the age of 16 he joined the U.S. Navy. He served in the U.S. Navy for close to 23 years in the aviation unit and the Sea-Bees (MCB 74) in several fronts including Vietnam. He received the following medals while in the service: Good Conduct medal, Navy Unit Commendation ribbon, Combat Action ribbon, Expert Pistol medal and National Defense Service medal. He was injured while on board ship and also shot while working on an electric pole in Vietnam. Chuck was extremely proud of his service to his country. Chuck loved deep sea fishing (especially with his best friend Douglas Allison) and hunting, a good game of horseshoes and darts. He was a millwright and electrician by trade.

On 16 Apr 1970 he married Anna Maria Gonzales. They had the following two boys, Gregory Guy (wife Sylvia and three children) and Christopher Leroy who has two children with Melissa.

On 27 Dec 2003 he married Mallory Jean Shaffer at the Covert Church, Armenia, Bradford County, Pennsylvania. With their marriage he gained three “bonus” children: April (Jesse) Stewart and their six children; Robyn Zapien (Wendy) and her three children and Jeffrey (Danielle) Reich and three children. Together they made their life in Armenia Township and gained many friends and family connections.

Besides his children, bonus children and many grandchildren, nephews and nieces, Chuck also leaves behind his loving wife Mallory and a brother, Frank (Yong) Babcock. He was preceded in death by his parents, a sister, Mary Short, a brother, Leroy Babcock, and a sister Linda VanNoy. Also, his constant companion dog, CJ. The family would like to thank his Guthrie medical team for the years of dedicated care they gave him and to the medical team who worked so hard to save him. A service to celebrate his life will be held at a later time. Arrangements have been entrusted to the Gerald W. Vickery, Jr. Funeral & Cremation Services, Inc. Troy, PA.