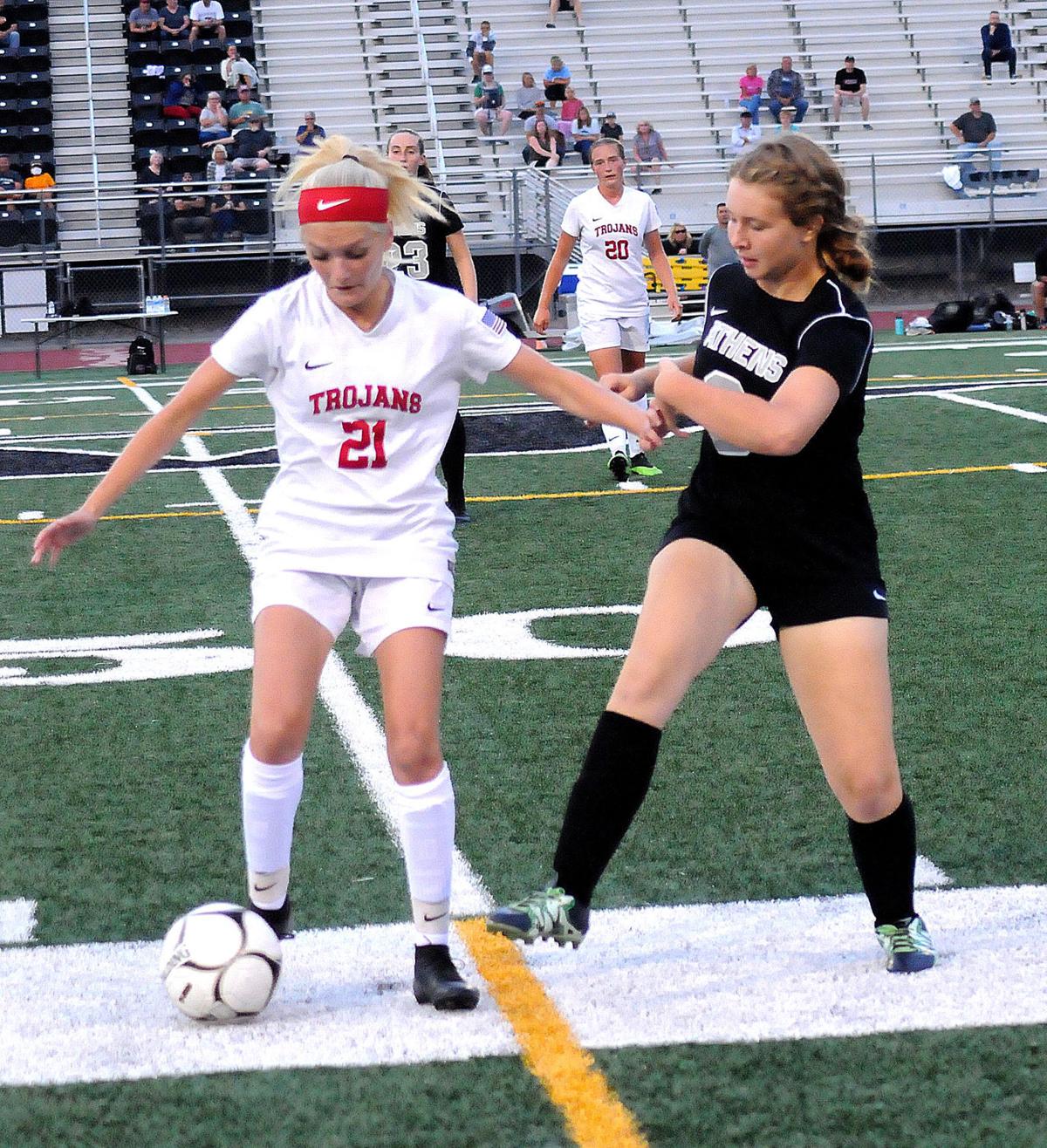 Troy’s Makenna shields the ball away from Athens’ Savannah Persun. 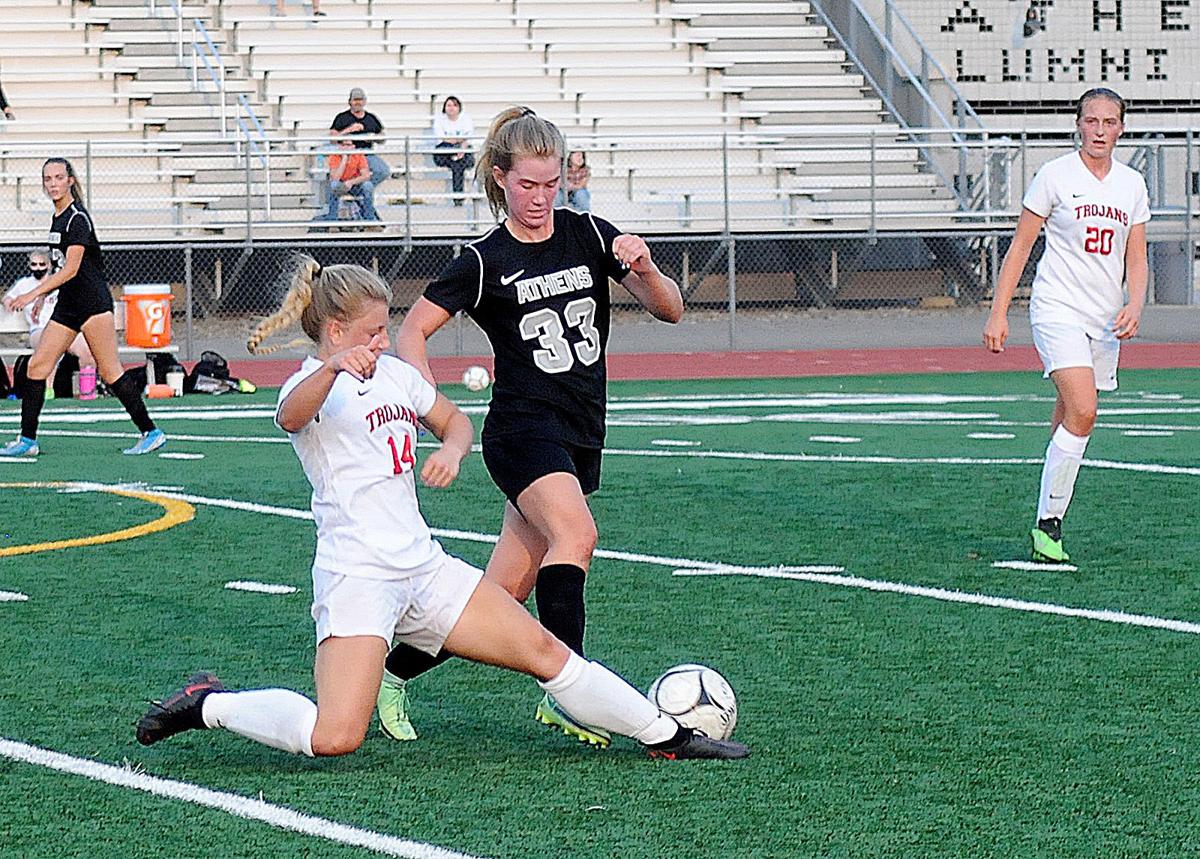 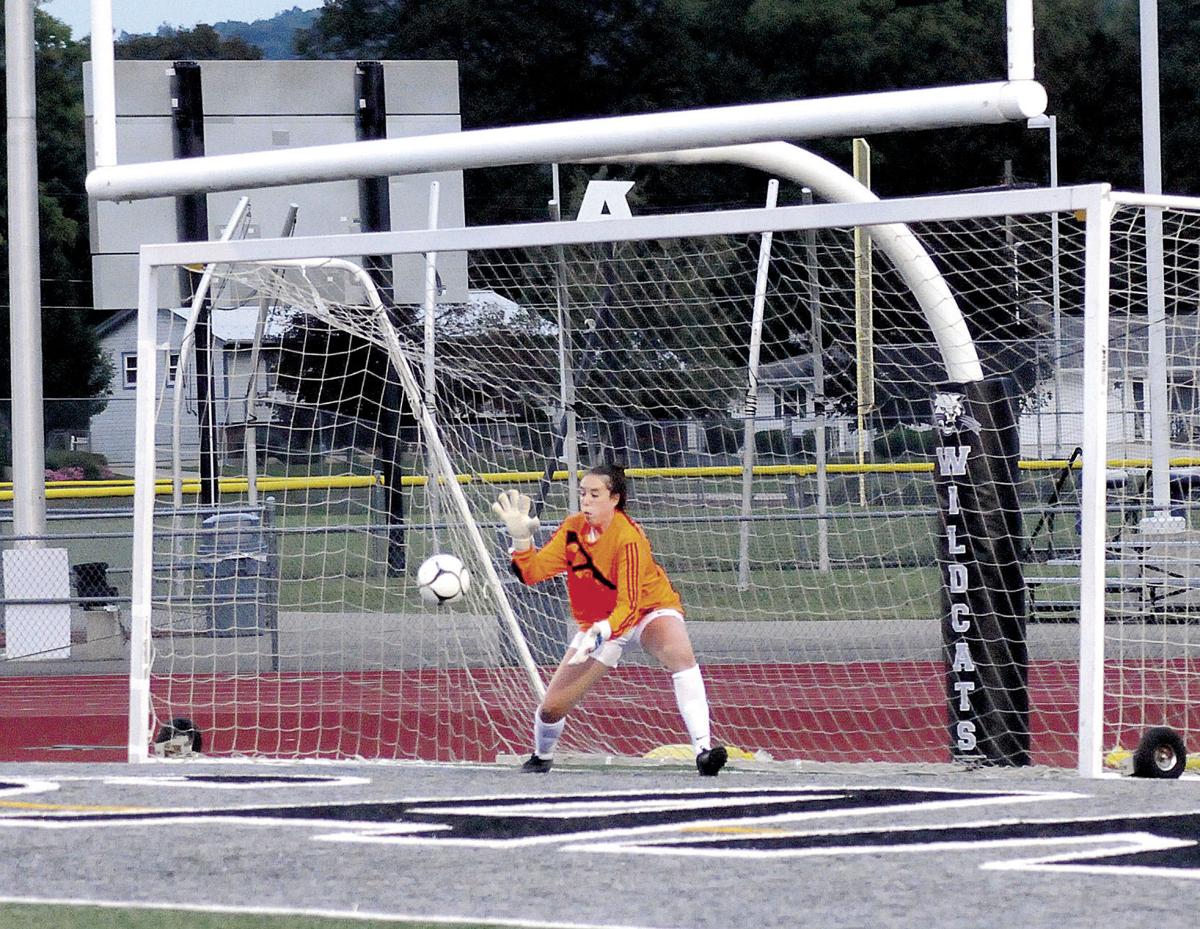 Troy's Madelyn Seeley makes a save.

Troy’s Makenna shields the ball away from Athens’ Savannah Persun.

Troy's Madelyn Seeley makes a save.

ATHENS — Down 2-1 at the half after an unlikely goal by Troy, Athens’ girls soccer team rallied the troops for a two-goal second half on the way to a 3-2 win over one of the better teams in the Northern Tier League.

Athens Head Coach Rich Pitts wants his team to be pushed. That’s why, even after his Lady Wildcats struggled a little in the first half, he was happy at the end.

“It was a great win,” said the coach after the game. “Troy’s really good. They’re always a good squad. They won a couple good games and they came in here ready to roll.”

Pitts said that his squad didn’t seem to be ready to go at first touch.

“I said before the game ‘we’re not ready’,” said Pitts. “Even in warmups, we were not mentally prepared and they took advantage of it.”

In spite of that, Athens got on the board first. Addy Wheeler advanced the ball to Ally Thoman who then found Hannah Walker. The senior connected from 13 feet to put Athens up 1-0.

The first of Troy’s goals, at the 20:52 mark of the first half, was scored by Addison Parker with an assist from Camille McRoberts.

Just 87 ticks of the clock later, Taylor Williams sent a shot from 30 yards out. It looked like Athens keeper Karlee Bartlow got her hands on the ball but couldn’t corral it and it rolled into the goal.

Athens came out with greater purpose in the second half and took the game to the Trojans. The added assertiveness paid off with 37:57 to play when Caydence Macik found Thoman on the right side of the goal for the score.

The game stayed tied until the 24:36 mark when Hannah Walker sent a nice cross to Thoman for her second tally of the game and the third Athens goal.

“I think we worked our way into the game,” said Pitts. “We were down 2-1 but I wasn’t overly worried. We knew the corrections we needed to make. The girls executed them. I was happy.”

Athens got off 10 shots to Troy’s 12. Bartlow had 11 stops in goal for Athens while her Trojans counterpart, Madelyn Seeley, had nine saves.