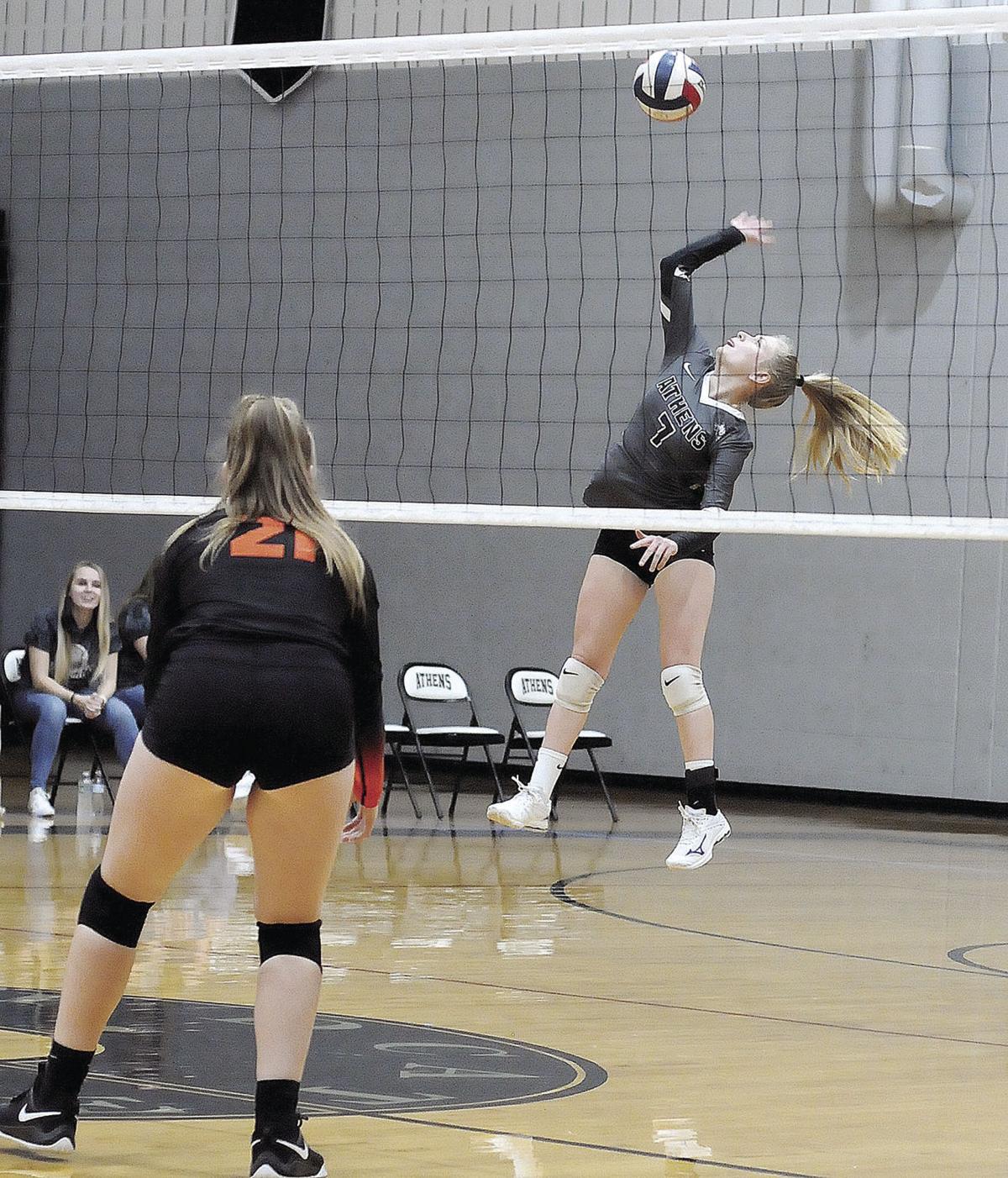 Athens’ Jenny Ryan goes up for a kill during Wednesday’s match against Towanda. 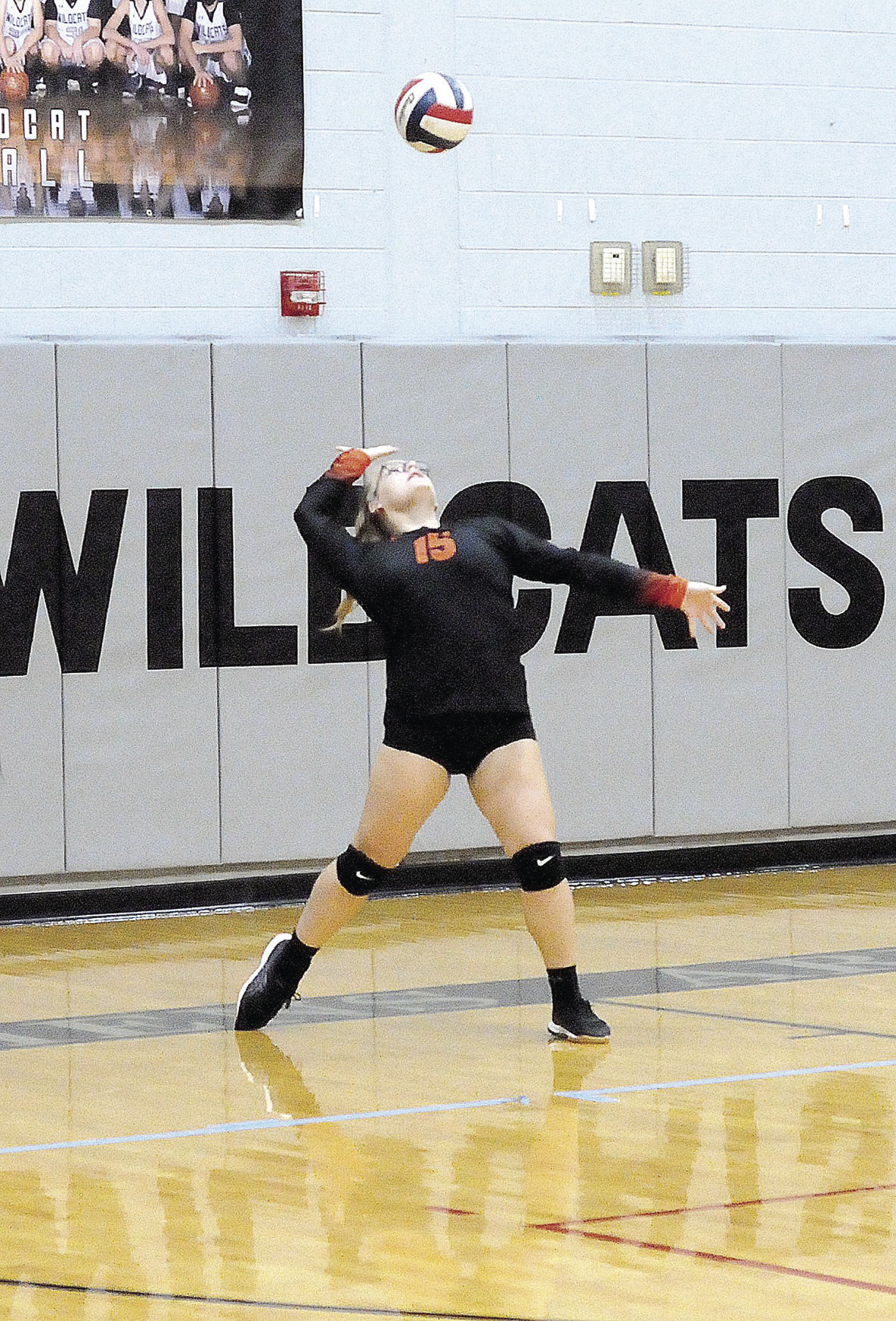 Athens’ Jenny Ryan goes up for a kill during Wednesday’s match against Towanda.

ATHENS — Looking for a fast start, Athens got exactly that then kept its collective feet to the floor board in a 25-14, 25-16, 25-20 sweep of Towanda Wednesday night.

“We’ve been figuring out some team stuff so it was really cool to see them come out the first game really fired up and ready to go,” said Athens Head Coach Heather Hanson. “Sometimes team sports can be up and down but we really put it together. It was really exciting.”

Audrey Claire served Athens out to a 7-0 lead in the first set. Paige Manchester kills — she had 21 in the match — kept Towanda hanging around for a while, but after a Braelynn Wood hit and an Ally Martin kill, Athens held a 17-6 lead and would maintain a double-digit lead the rest of the way.

Towanda got a faster start in the second set, leading 4-2 early on the strength of two Manchester kills and a Brea Overpeck ace.

Once Athens got the side out, Kassie Babcock stepped to the service line and, with the aid of a Jenny Ryan kill and an ace, reeled off three straight points for a 5-4 lead. Towanda tied it at 5-5, but the next 10 points went Athens’ way. Up 6-5, Ryan took advantage of a winning hit by Wood and an ace to put her team up 15-5.

Towanda stopped the bleeding momentarily, but a four-point Athens run made it 19-6.

Towanda fought back as Manchester took command and got within six at 21-15 but Ryan and Martin led an Athens charge for the 25-16 win.

The third set was competitive from the outset, but Towanda’s only lead was at 3-2.

For a time, the teams bounced back and forth between making big plays and errors. Up 8-7, Athens used two kills from Claire and an error to take an 11-7 lead.

The Wildcats’ advantage ranged between three and five points. A pair of Manchester kills cut Athens’ lead to 13-10 but a trio of Towanda errors left Athens up 16-10.

Still, the Lady Wildcats couldn’t get the separation in the third set they had in the first two sets as two more Manchester kills drew the Black Knights within three at 18-15.

Towanda wound get no closer, though, as Athens held on for the 25-20 win.

“The last three years it’s been where we played Towanda and win the first two games then saw Towanda win 3-4-5 and come back to get us,” said Hanson. “I didn’t say anything to the girls but I was thinking about it in the third game, like ‘oh gosh, here we go’ and they didn’t do that.”

Addison Maynard led Towanda in service points with eight and Madelyn Maynard packaged 11 digs with six points. Manchester added 10 digs and two blocks to her kills and Overpeck handed out 19 assists for the Knights.

Athens will step up in competition level tonight when the Wildcats visit North Penn-Liberty.

Kaitlyn Heeman, Joslynne Reynolds and Ashlyn Vargason led the way for Towanda with seven points each.

For Athens, Keaton Wiles had 18 assists and seven kills and Izzy Davis finished with 20 assists and 10 points with six aces.