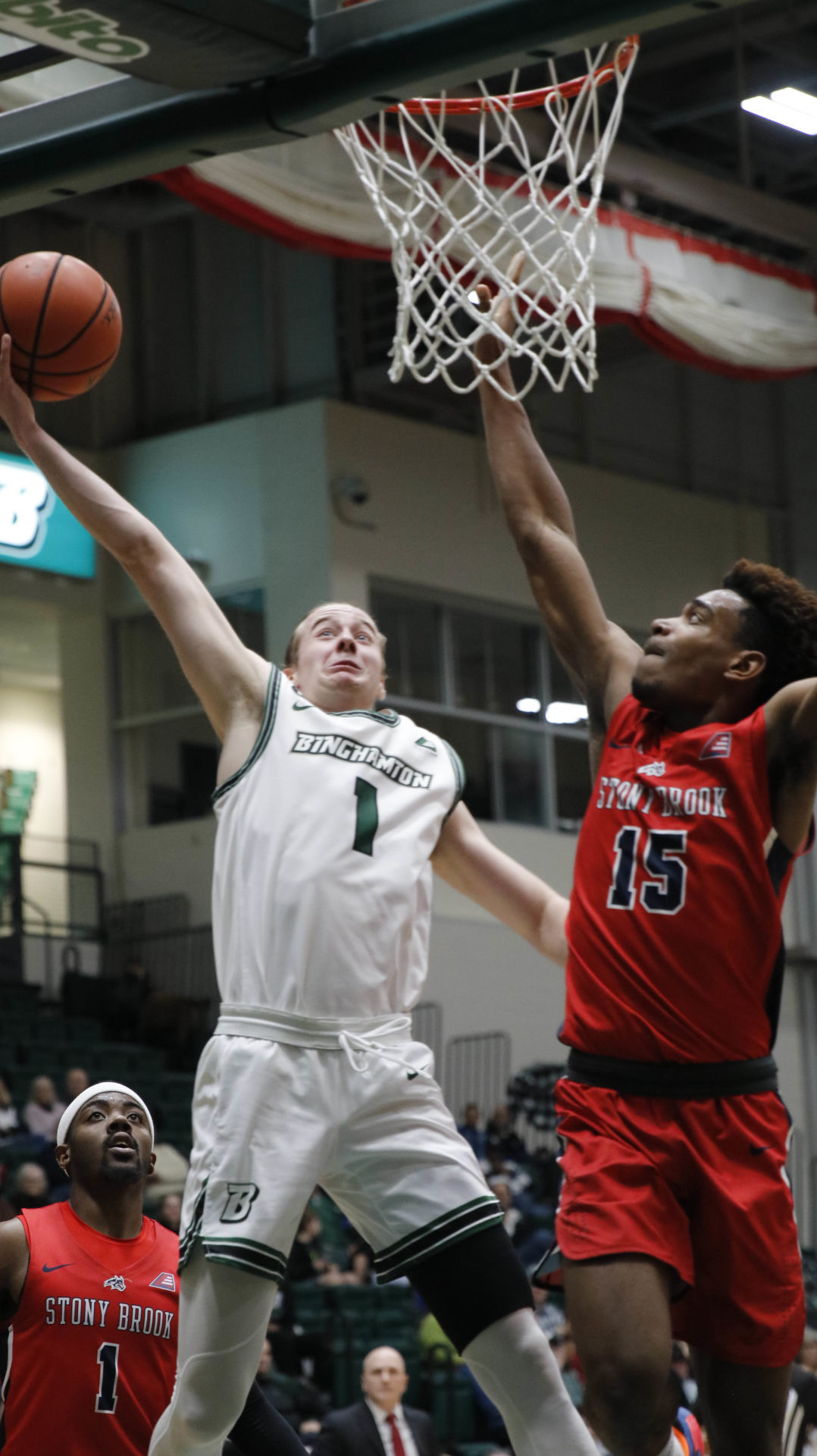 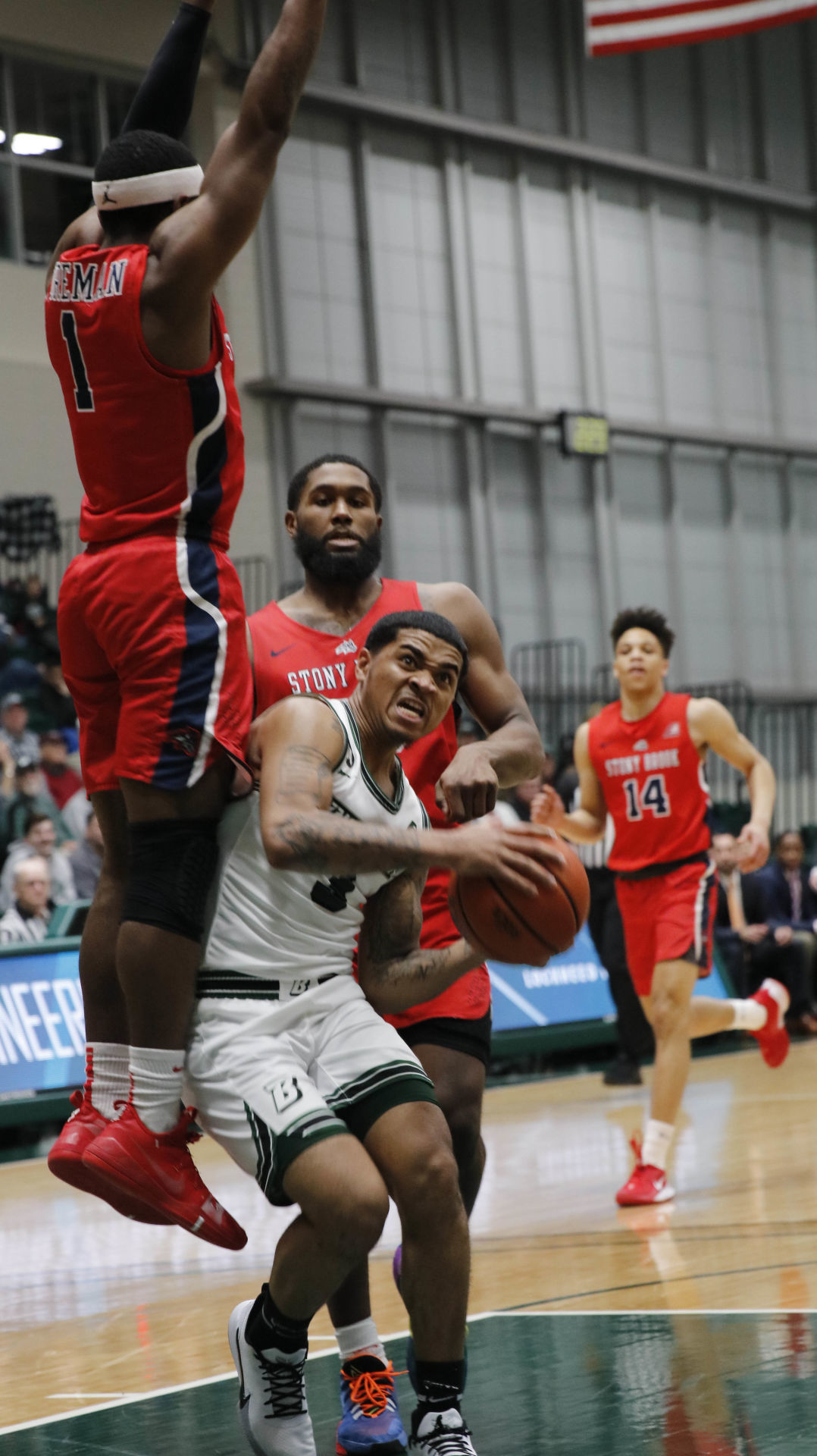 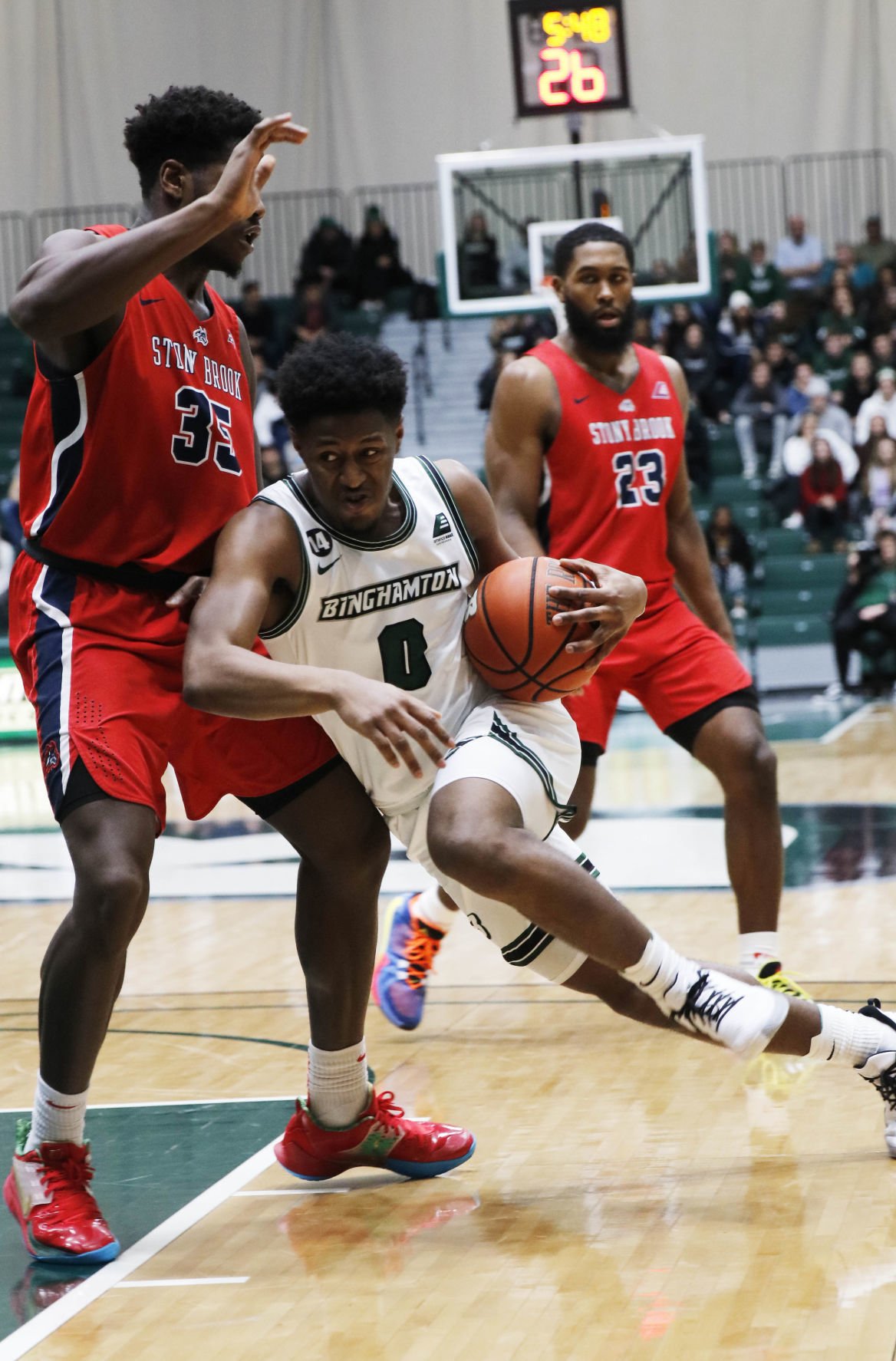 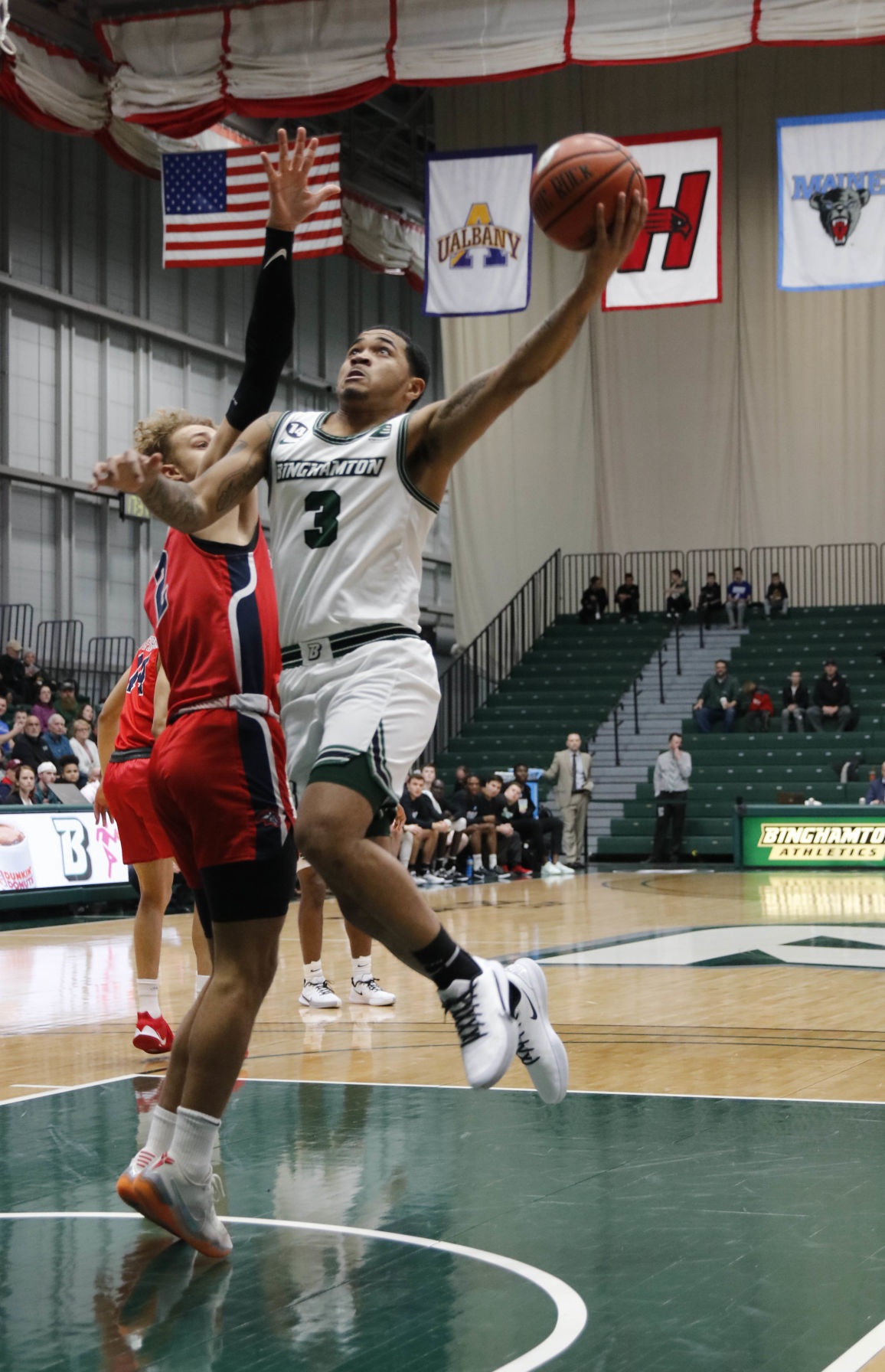 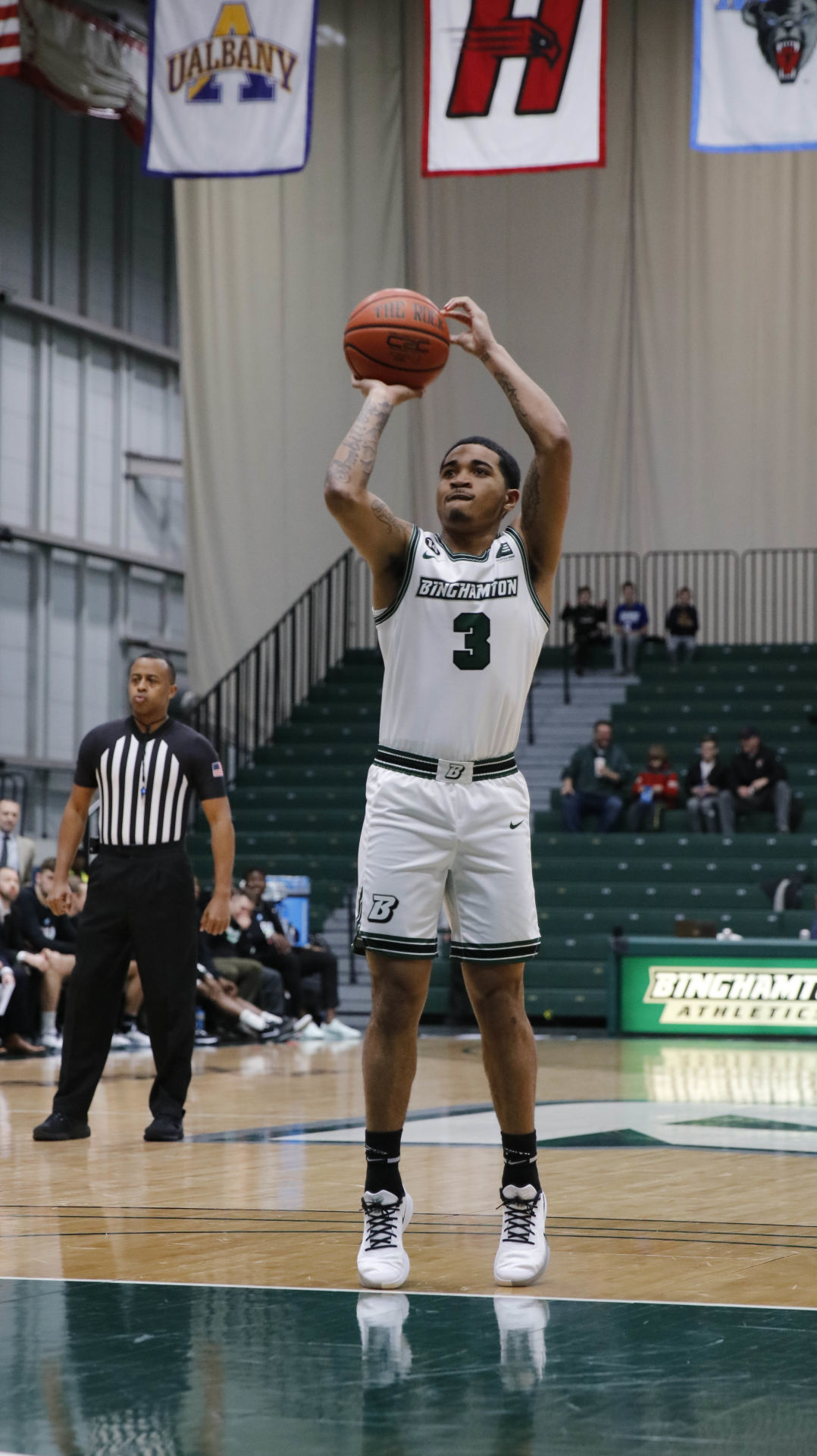 Riding a four game losing streak the Binghamton Bearcats men’s basketball team was hoping to get some momentum going their way as the always tough Stony Brook Seawolves rode into the Events Center. BU fought hard and fought early keeping the game within reach the entire night but came up short as BU’s Brenton Mills three point attempt to tie rimmed out with five seconds left.

Stony Brook stormed to 10 point lead in the first half leading 23-13 but a 11-0 run for the Bearcats to take the lead at 24-23 gave hope that this might finally be their night. Stony Brook kept the pressure on but was only able to lead BU by three at the half 34-31. In the second half BU never lead but kept it close. After Stony Brook lead by nine BU was able to get the game within one shot for the lead numerous times but just could not get the shot to drop.

A frustrated BU Head Coach Tommy Dempsey offered his comments at the end of the night: “Well its certainly never easy to lose,we are in a position now where we need everyone we can get. We had one that was in our reach tonight and it was just disappointing to not get it. I was really pleased with how we played, I thought our effort was great, I thought our execution was really good against the zone. We hadn’t seen a lot of zone this year. I was worried we would see some tonight and we did and we executed well against it especially in the second half. Our guys did what they needed to do to give themselves a chance to win and I credit Stony Brook they found a way to get out of here with a win.”

One bright spot on the night was BU Sophomore point guard Sam Sessoms hitting the 1,000 point mark for his career at BU not even halfway through his collegiate career. In doing so he became only the 7th player in the 41 year history of the America East Conference to complete the task in his sophomore year. Sessoms lead all BU scorers with 22 for the night followed by Richard Caldwell Jr. with 17 and George Tinsley with 11.

With the loss BU falls to 8-16 overall and 2-9 in the America East. Next up for the Bearcats is a tough road trip to face America East leader Vermont this Saturday, Feb. 15 with a tip off time scheduled for 2 p.m.