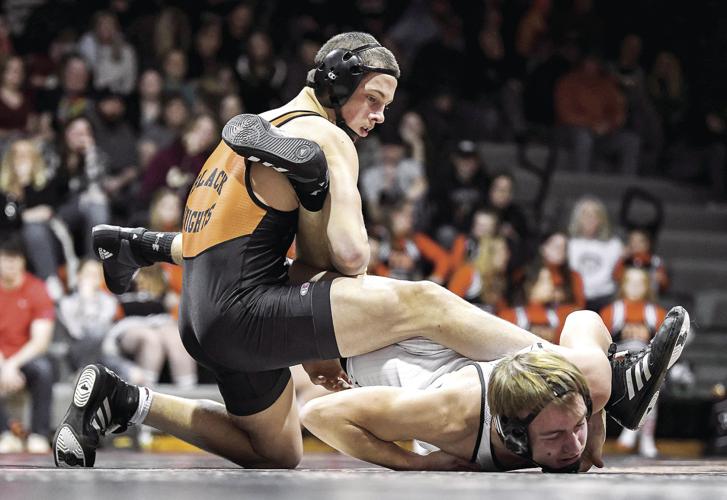 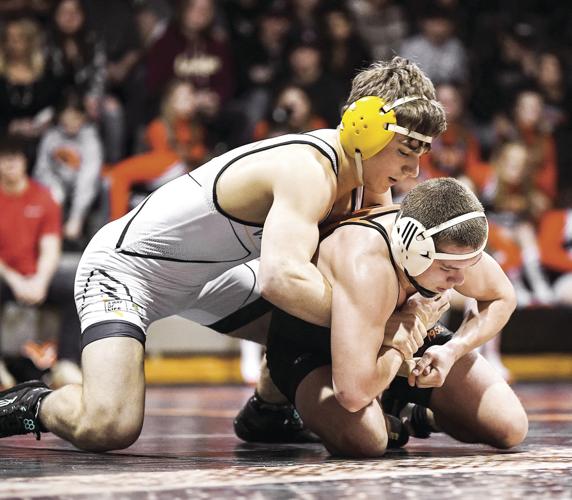 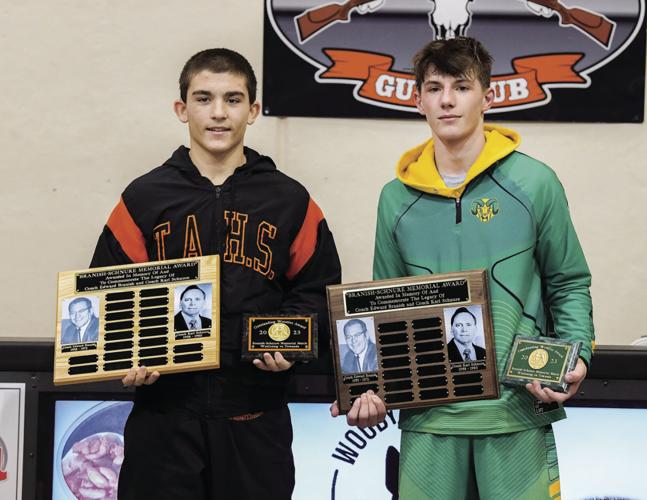 Towanda’s Rylee Sluyter, left, and Wyalusing’s CJ Carr were both recipients of the first-ever Branish/Schnure Memorial Award. The award recognizes legendary coaches Ed Branish, Towanda, and Karl Schnure, Wyalusing. Both former coaches passed away in 2022. Award winners will be chosen after each season’s Towanda and Wyalusing match by their respective coaches.

Towanda’s Rylee Sluyter, left, and Wyalusing’s CJ Carr were both recipients of the first-ever Branish/Schnure Memorial Award. The award recognizes legendary coaches Ed Branish, Towanda, and Karl Schnure, Wyalusing. Both former coaches passed away in 2022. Award winners will be chosen after each season’s Towanda and Wyalusing match by their respective coaches.

TOWANDA — The Towanda Black Knights won the final three bouts on Saturday night as they earned a 40-27 win over rival Wyalusing to retain the Standing Stone Trophy for a second straight year.

Trailing 27-25 with three bouts remaining, Towanda sophomore Rylee Sluyter picked up a huge fall over Jonathan Earle at 133 pounds to put the Knights in front 31-27.

Towanda standout Riley Vanderpool followed that up with a pin of his own at 139 pounds, and Chase Geurin closed things out with a 6-5 decision over Cade McMicken at 145 pounds.

The match started at 152 pounds where Wyalusing’s Ayden Hunsinger got a 6-1 decision over Aiden Miller.

Jace Gunther responded for Towanda with a 13-3 major decision over Ethan Vanderpool at 160 to put the Knights up 4-3.

Towanda sophomore standout Mason Higley continued his big season with a pin of Jordan Lamb at 172, and Sawyer Robinson followed that up with an 8-5 win over Alex Hunsinger at 189 to put the Knights in front 13-3.

Wyalusing answered back with a pin from Zach Fenton over Tristan Conklin at 215 pounds, but Audy Vanderpool decked Michael Newman at 285 to counter for the Knights.

With Towanda leading 19-9, Wyalusing stormed into the lead with pins from Isaiah Harvey at 107 pounds and Cole Patrick at 114 to make it 21-19 in favor of the visiting Rams.

Towanda regained the lead with a forfeit win for Anthony Rifenbark at 121, but Wyalusing got back on top when CJ Carr pinned Hayden Space at 127 to make it 27-25 with those three bouts left.

“I thought it was a hard fought match,” Towanda coach Bill Sexton said. “I thought Wyalusing wrestled very well tonight, they always do, and we always wrestle tough against them. It doesn’t matter what our records are ... we both showed up and wrestled really hard tonight.”

A new tradition began on Saturday night with the first annual Branish/Schnure Memorial Awards being given out to one wrestler from each team.

The award honors former coaches Ed Branish (Towanda) and Karl Schnure (Wyalusing). Both men, who passed away last year, helped put their respective programs on the map in the NTL, District IV and the entire state.

With his big time win at 133 pounds, Sluyter earned the first-ever award for the Black Knights.

“That’s a big match,” Sexton said. “That’s why he got the Branish/Schnure Award tonight. He went on the mat for a pivotal match. We both needed to win it, he went out and won the match. Two kids that are having good years, pretty evenly matched (bout), he took it to the next level and was able to get us the big points.”

With his pin at 127, Carr was Wyalusing’s recipient for the Branish/Schnure Award.

Towanda will host Athens, while Wyalusing is set to take on Williamson at home tonight.

Will you be watching Punxsutawney Phil on Groundhog Day, Thursday, Feb. 2?