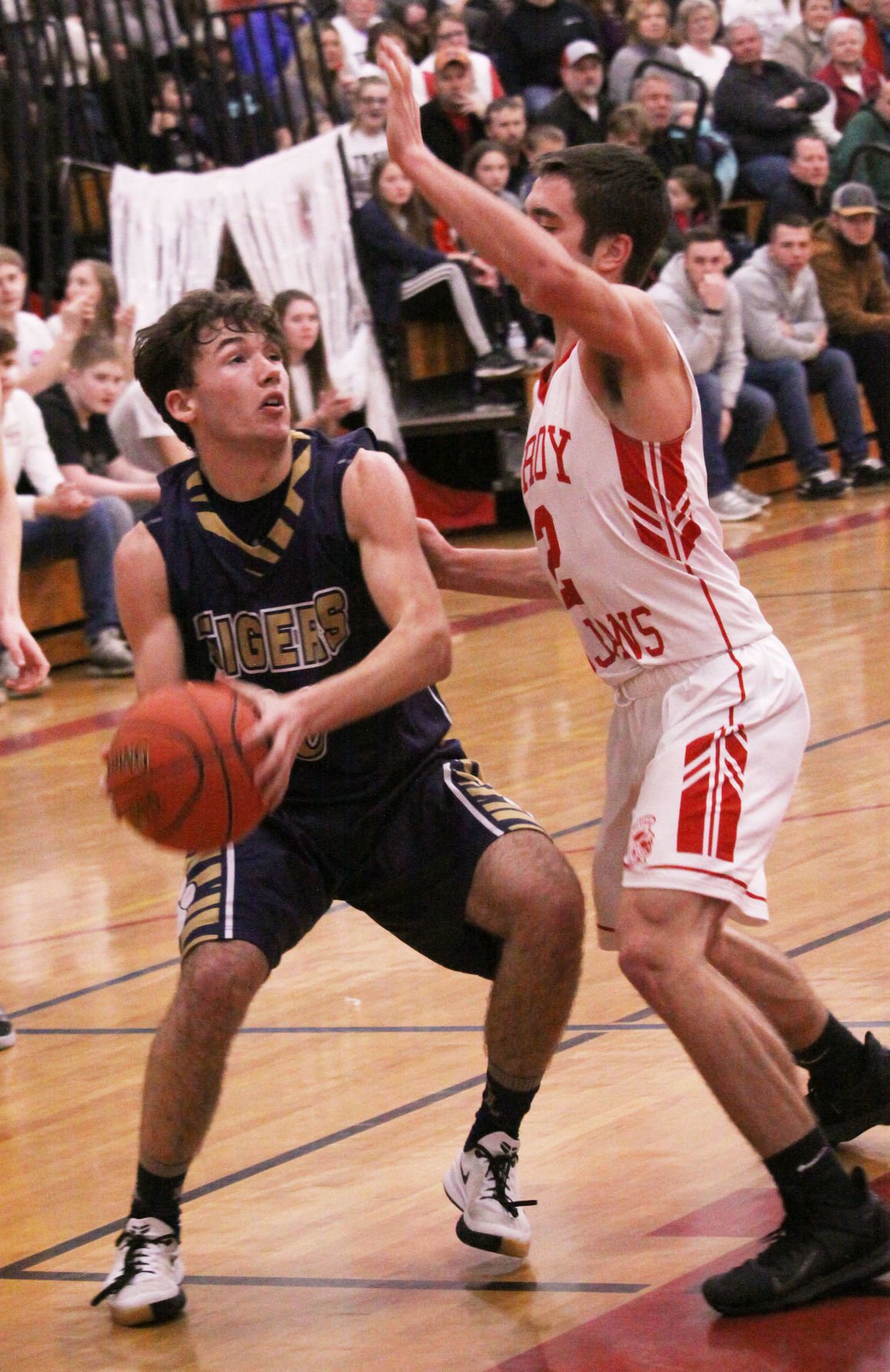 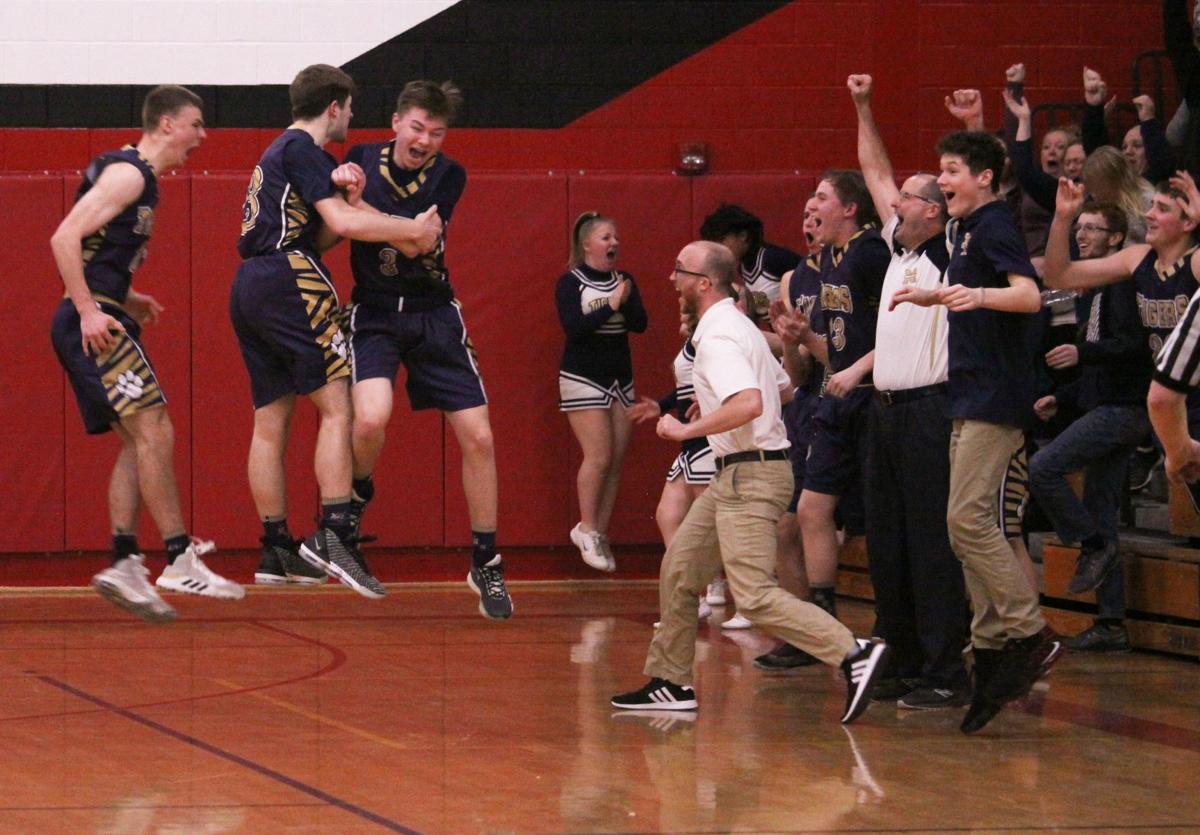 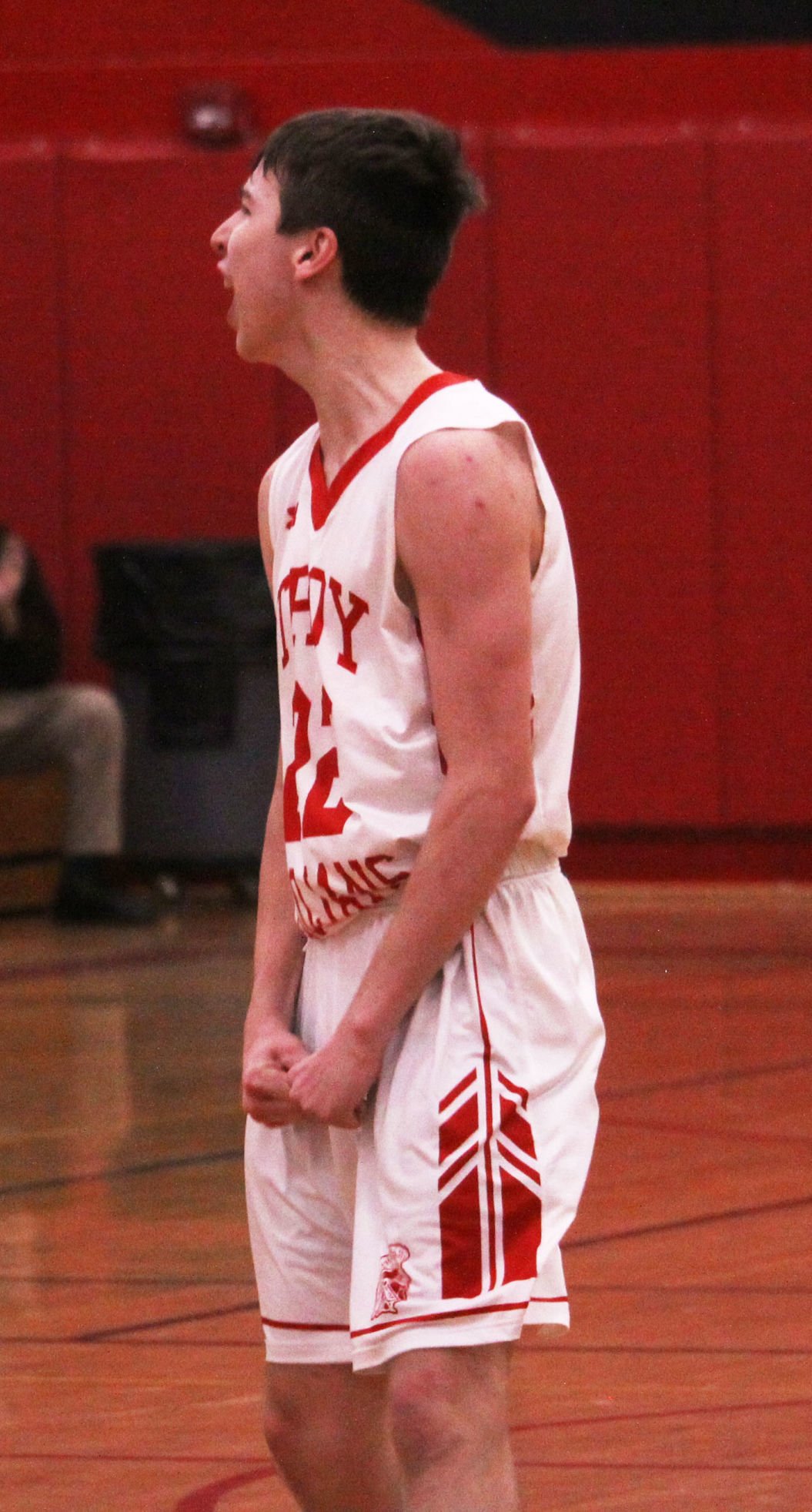 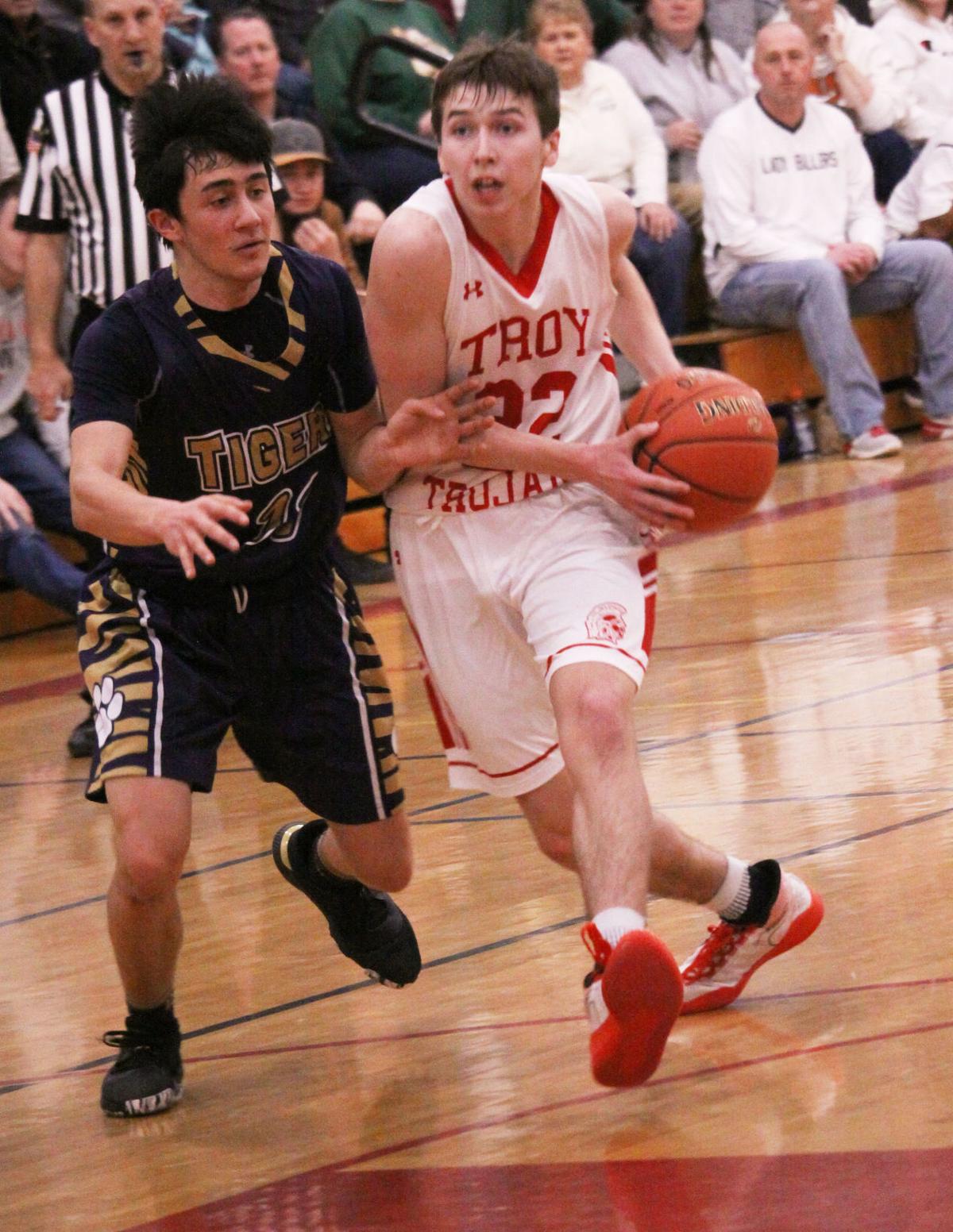 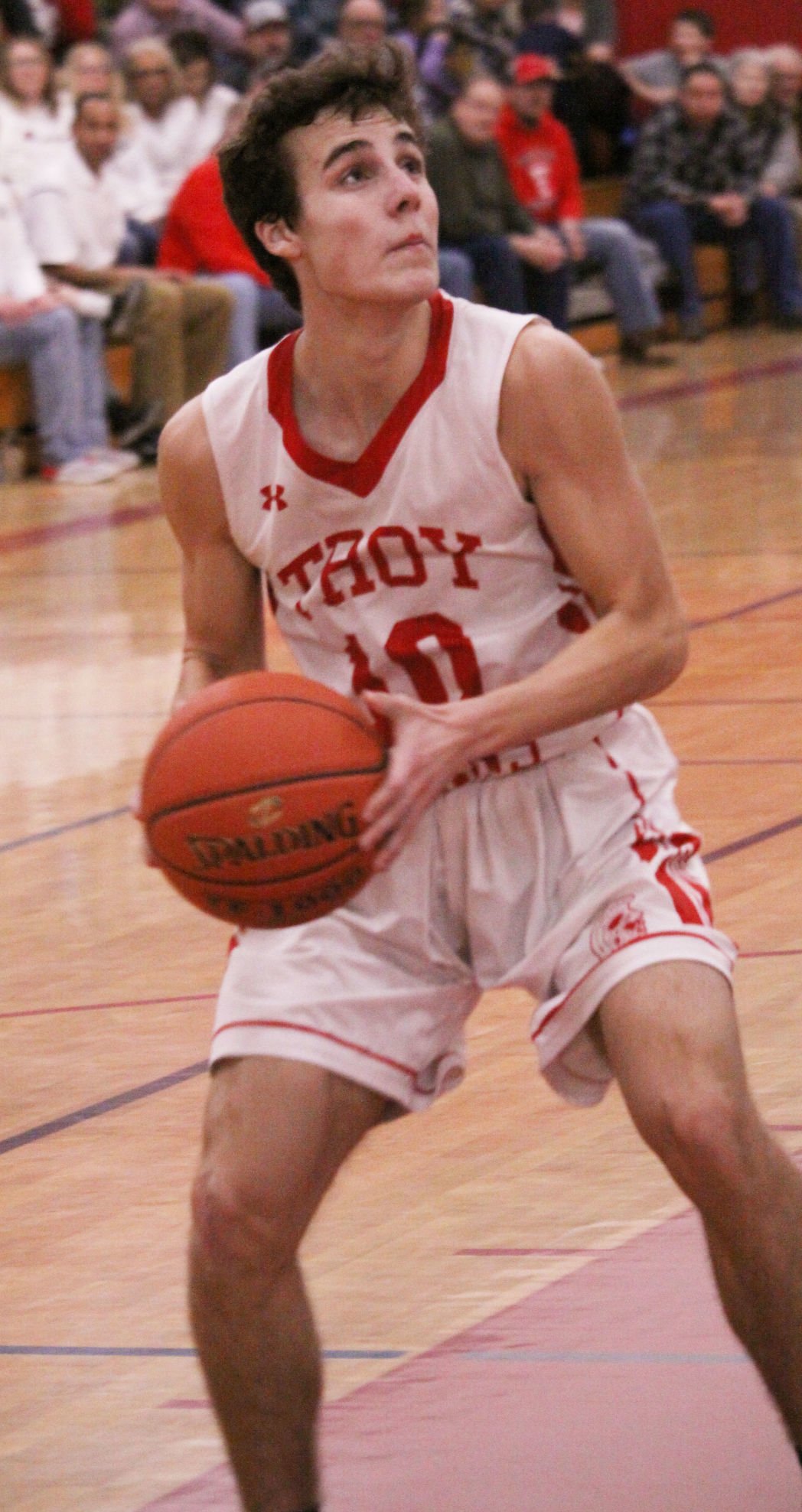 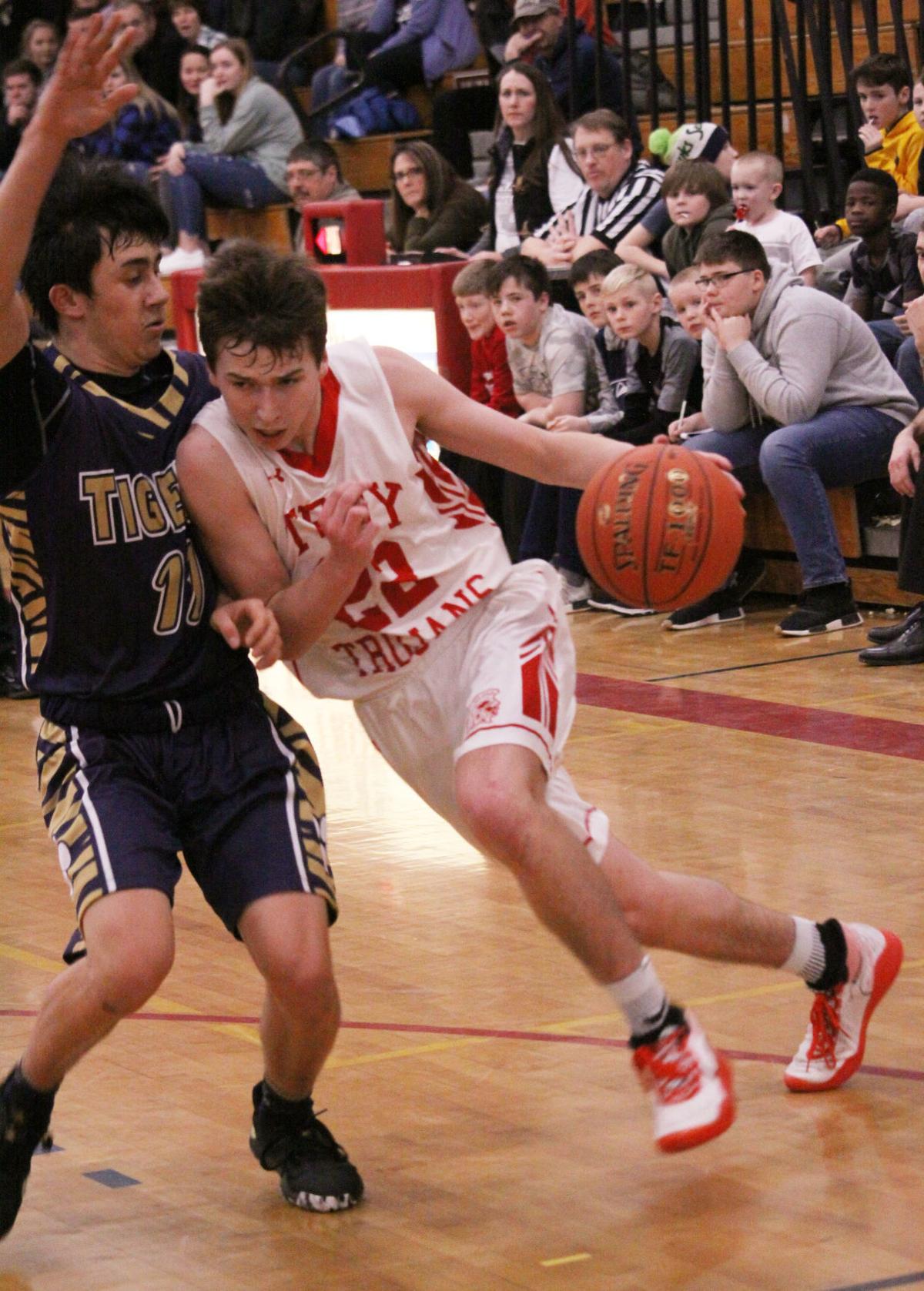 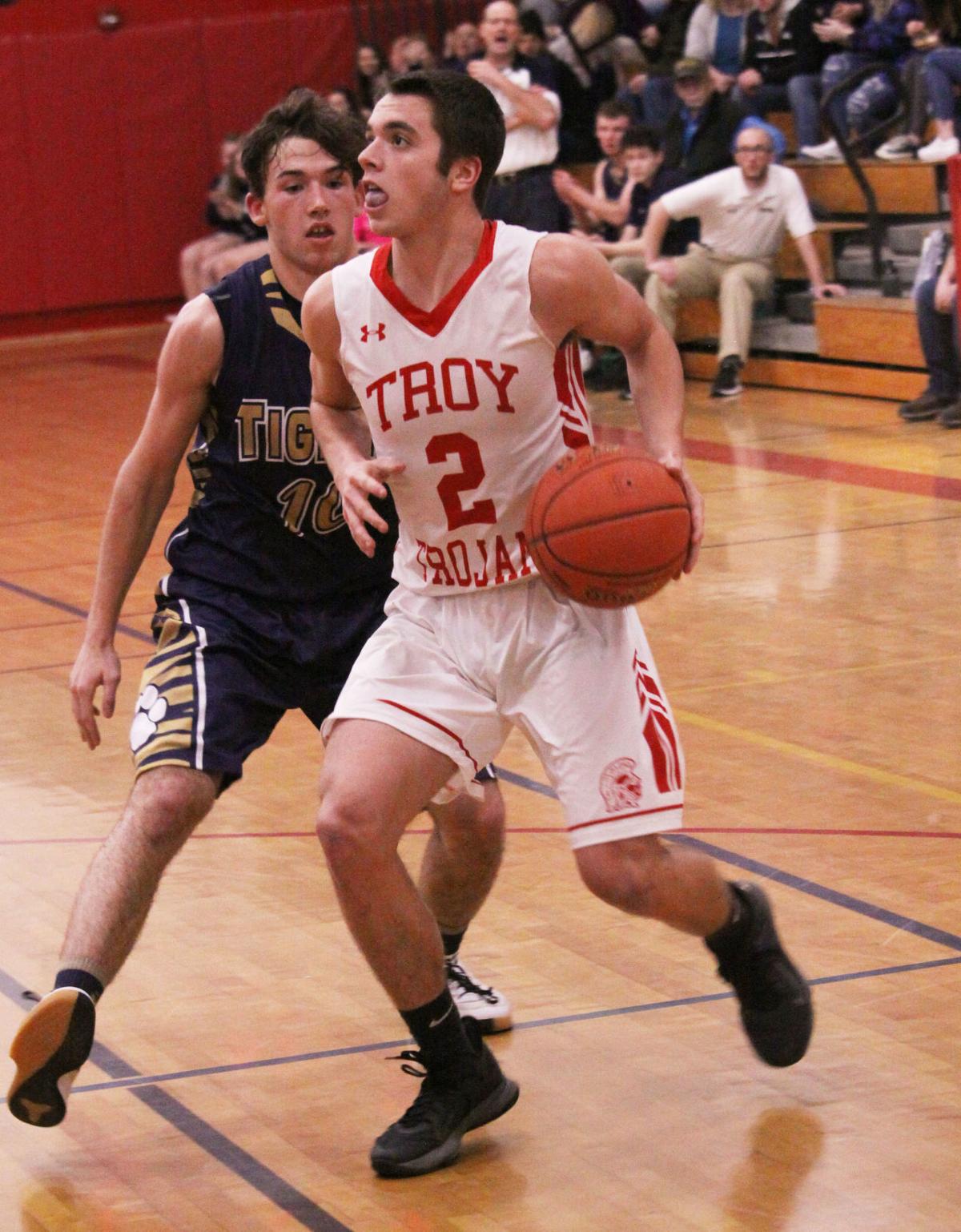 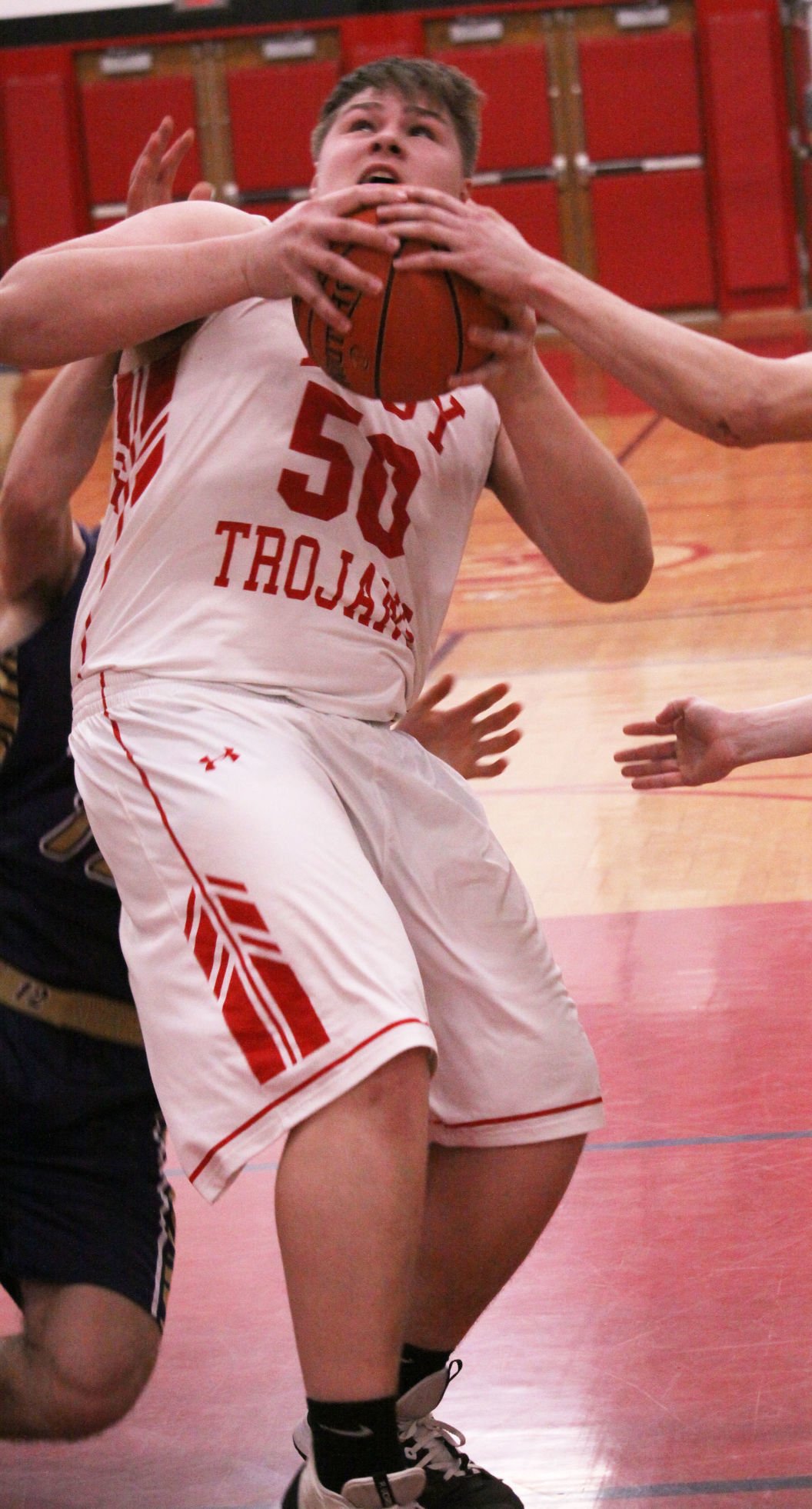 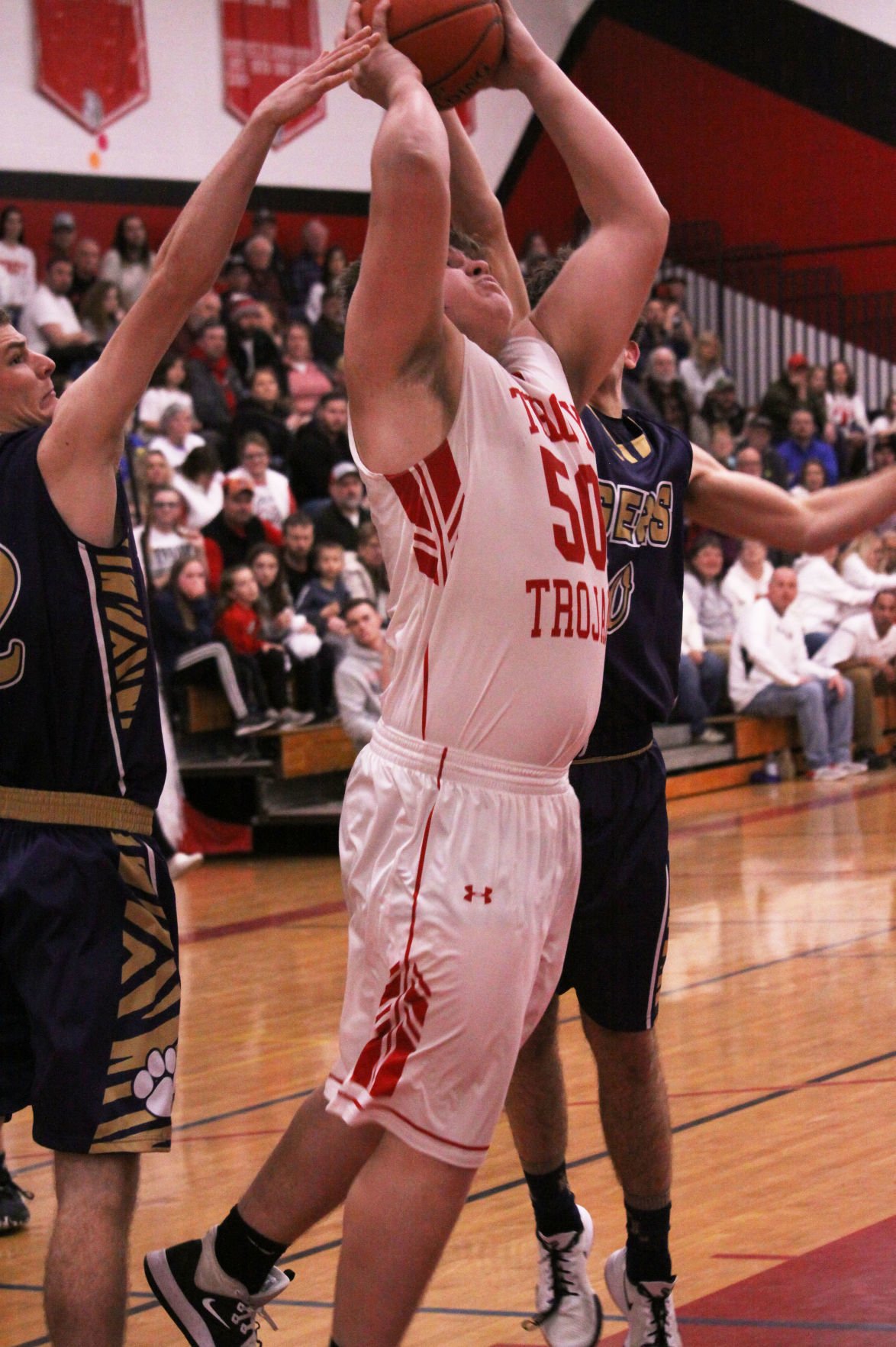 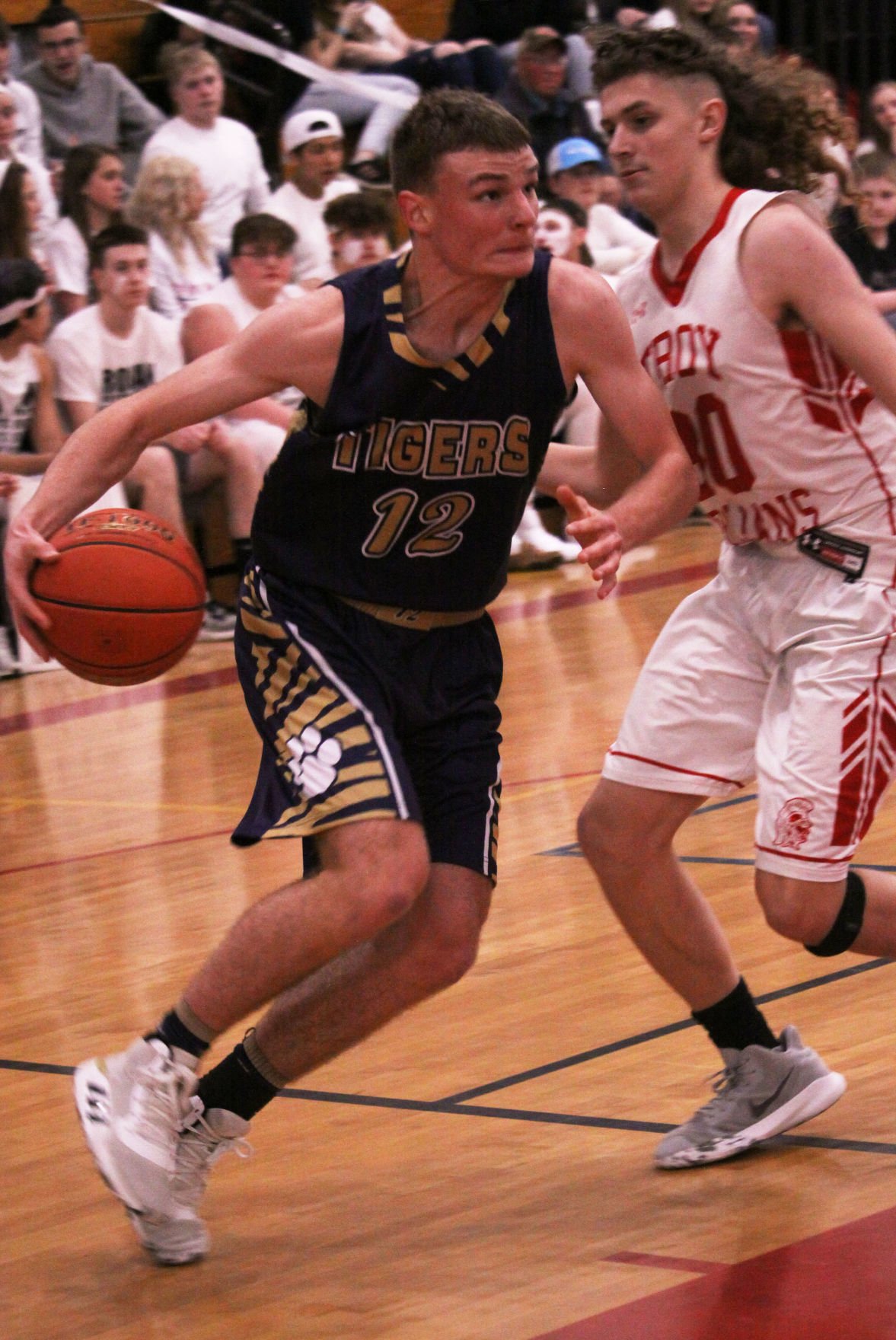 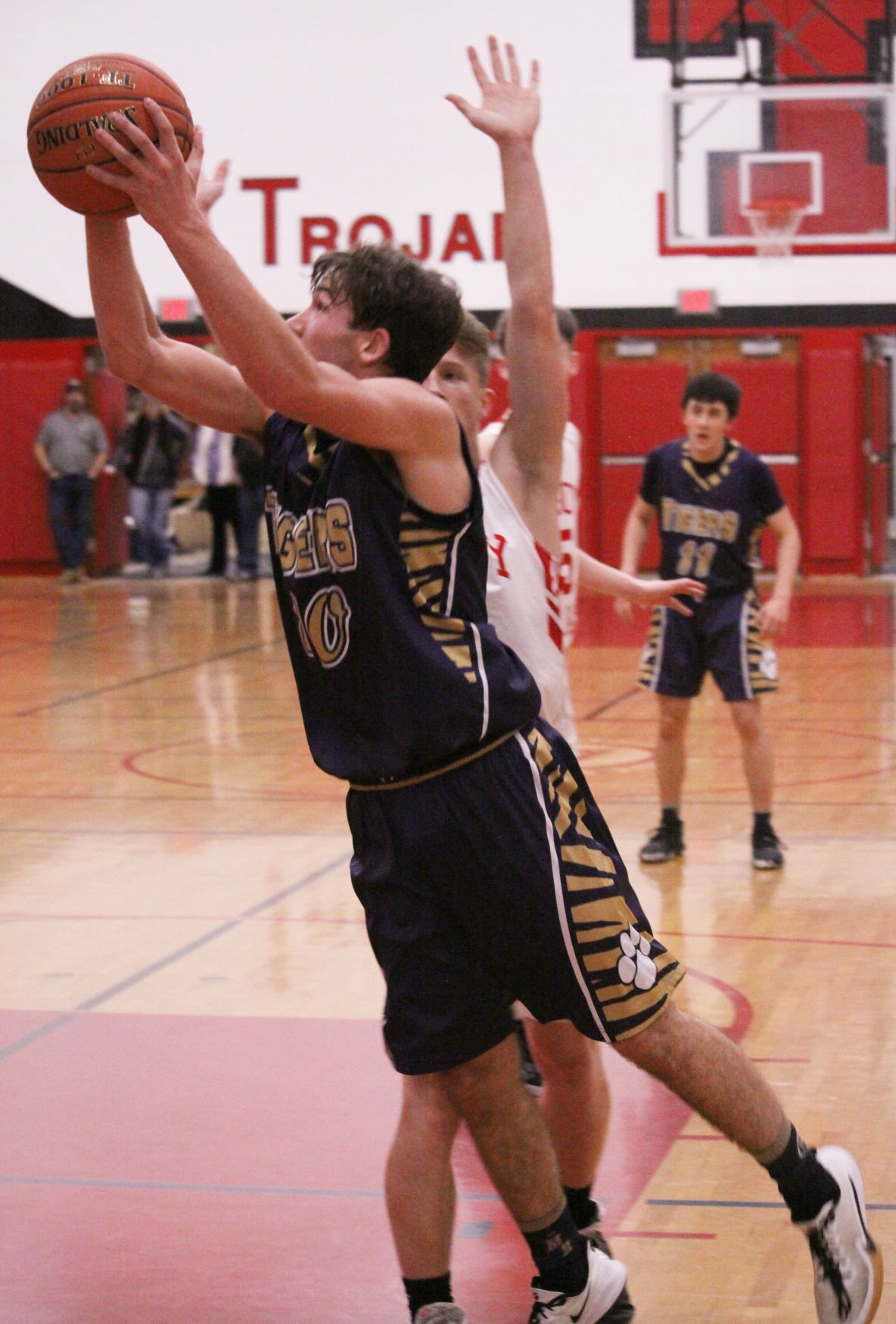 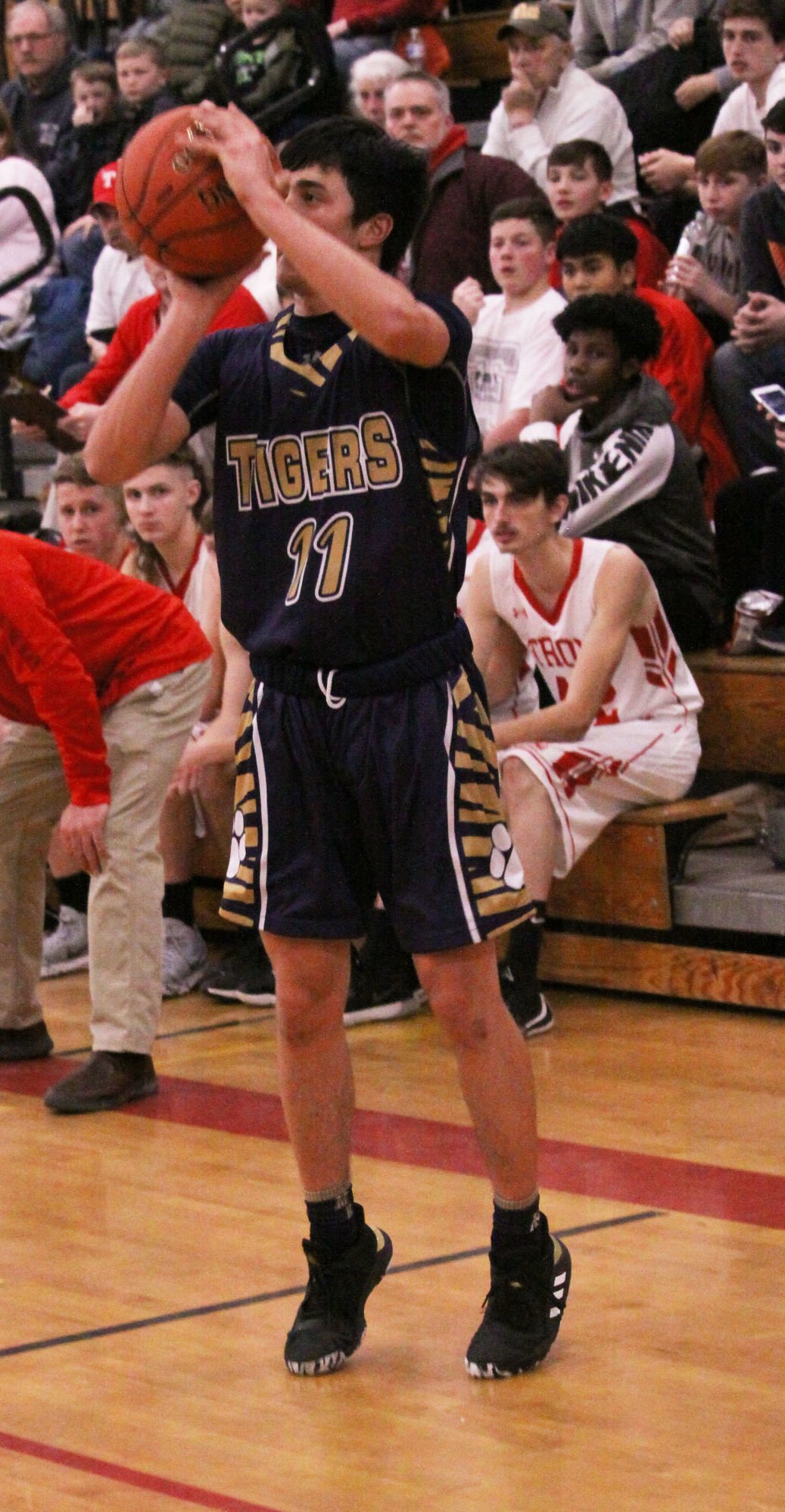 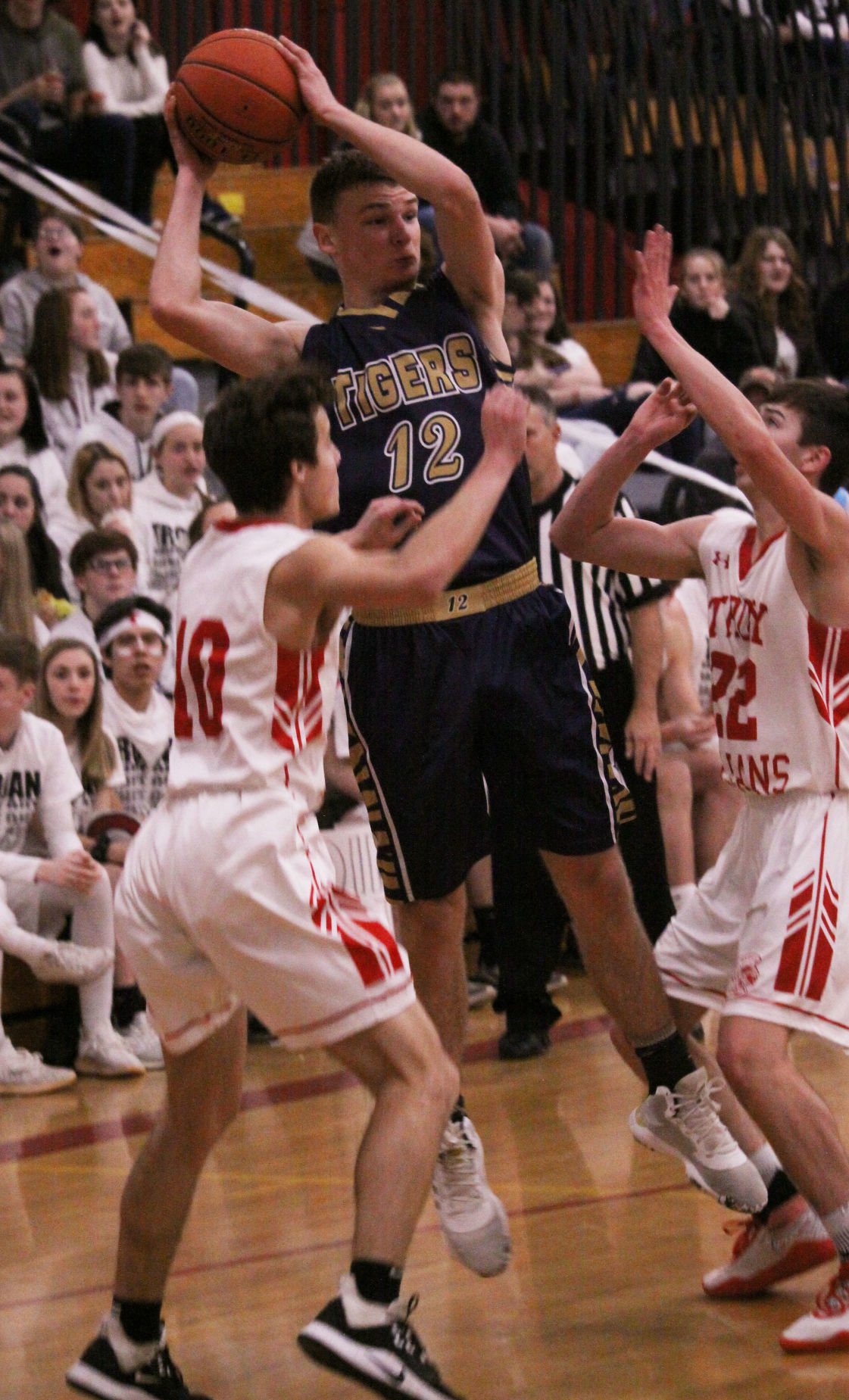 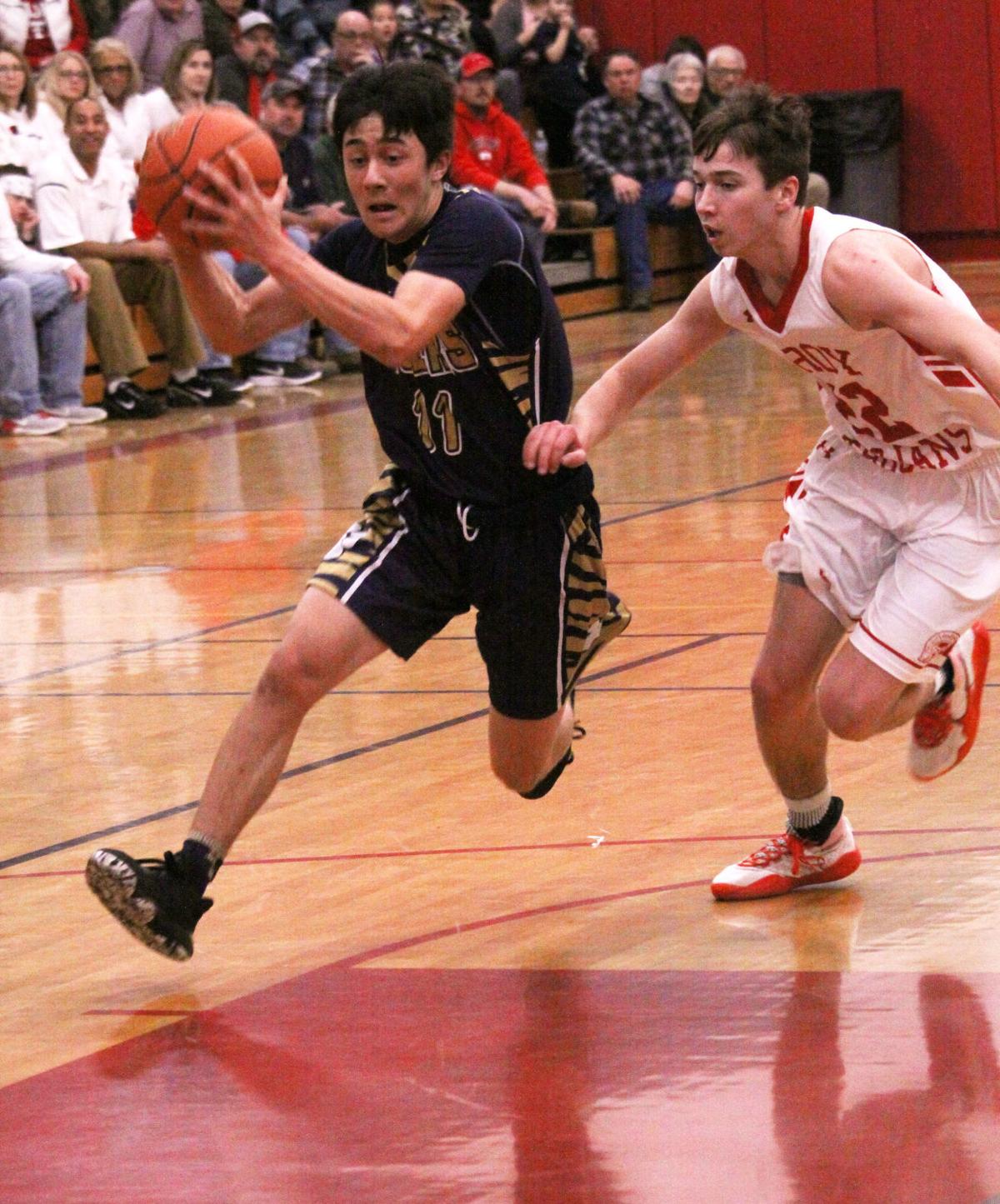 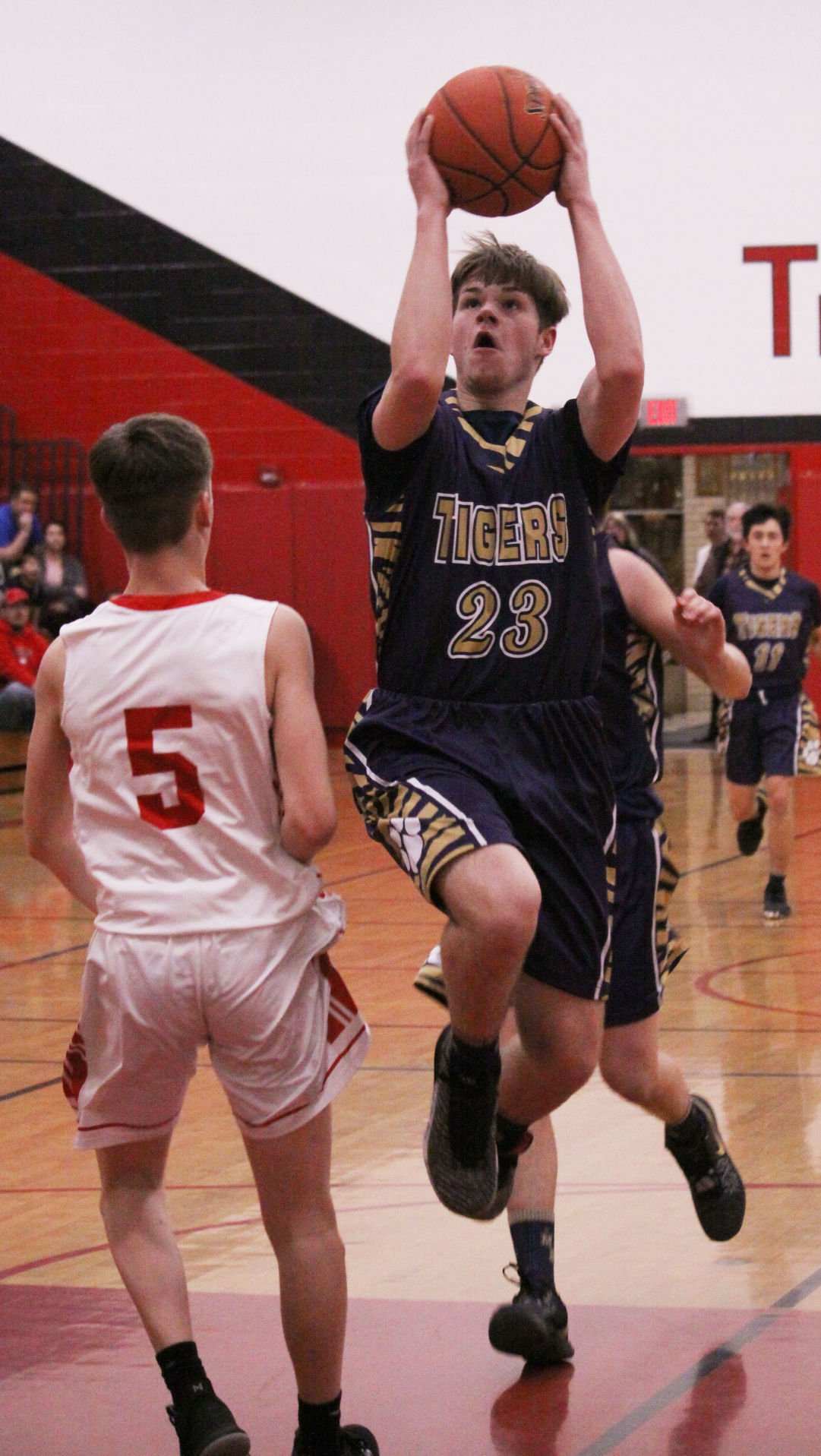 TROY — This NTL Division-I boys’ basketball season was crazy already but it got crazier on Thursday.

With a win Troy would take the championship but North Penn-Mansfield was coming off an upset over Athens to put the Trojans in the driver’s seat.

After going back and forth all game it looked like Troy had it won when Ty Barrett hit the go ahead jumper with 10 seconds to play.

On NPM’s ensuing possession Alex Stein’s jumper with three second to play came up short. But Logan Tokarz was Johnny on the spot, nabbing the offensive rebound and putting it back just as the buzzer rang to give the Tigers the 50-49 win.

“I know Troy won the battle on the offensive glass but that was the biggest offensive rebound of the night,” said NPM coach Kipper Burleigh.

The NPM victory drops Troy into second with Athens moving into first, as they defeated Towanda, for the division.

“We’ve sure lost enough of them on the other side,” said Burleigh. “I was pleased with the way the kids executed the first play and I was pleased with how the kids executed the second play. I’m really proud of Alex Stein for only his defense (on Ty Barrett) but he was willing to take that huge shot. Then I’m prouder of our senior captain Logan who never gave up on the play.”

The energy at the Commons Building was electric and it showed on the court as both teams were amped up. Turnovers were high and there were only five 3-pointers between them but the effort and emotion they showed matched the importance of the contest.

The Tigers led for most of the first half, taking a 7-4 lead with 5:00 left in the opening quarter.

They pushed it to 10-6 with 3:09 left to play but four straight points for the Trojans, one on a Barrett assist to Dom Ayers and the other by Barrett himself knotted the ball game up at 10-all with 2:00 left.

Dominick Garverick put NPM up on a drive with 1:00 left to play but a Barrett 3-ball off a Nick Williams assist with 10 seconds left in the quarter gave the Trojans a 13-12 lead after one.

NPM came out strong in the second quarter, scoring four straight points to go up 16-13 and holding the Trojans scoreless until the 4:45 mark.

A Mason Imbt put back ended the Trojan drought and cut the deficit to 16-15. The two teams traded buckets then on back to back possession NP-Mansfield got field goals from Garverick and Curtis Craig to take a 22-17 lead with 1:50 to play in the half.

Much like the last quarter Troy finished strong as Imbt had a put back and with 15 second to play Barrett found Imbt for a lay-up to make it 22-21 at the half.

The Tigers came out strong in the third as Garverick scored four straight points to put them up 26-21 within the first minute.

That’s when Imbt took over for Troy.

He had a put back and got fouled. He missed the free throw, got his own miss and was fouled on the lay-up attempt.

A Craig bucket made a 3-point game again but Troy followed with a 5-point rally.

Ethan VanNoy started things off with a free throw followed by back to back buckets from Imbt to give Troy their first lead of the second half, 30-28, with 4:50 left in the quarter.

NPM found their range with back to back threes from Stein and Tokarz sandwiched around an Imbt put back to give the Tigers a 34-32 lead.

With 2:58 left to play in the quarter Stein hit two free throws but back to back jumpers by Barrett pushed Troy ahead 38-36 with eight minutes left to play.

It was back and forth through the final quarter as nobody could get more than a 3-point lead.

Barrett hit two free throws to make it 45-44 Troy but a jumper by Craig followed by a steal and lay-up from Tokarz put the Tigers up 48-45 with 2:40 left to play.

After they forced a turnover and on the ensuing possession had a lay-up but it rimmed out with 1:33 left.

NPM tried to hold the ball but Barrett got a steal with 48 seconds left to set up his fade away jumper.

Coming out of timeout NP-Mansfield had nine seconds to try and score. Troy’s defense made it difficult for them to find an opening for a shot.

Stein dribbled to the left baseline and, double teamed, forced one up with three seconds to play. It came up short and fell into the hands of Tokarz who laid it in just before the buzzer.

It was a balanced effort for both teams as Tokarz led NPM with 15 points followed by Garverick with 14 points and Craig scoring 12. Stein finished with five points and Jacob Evans netted four.

Barrett had a game high 22 points, 11 in the fourth quarter, as Imbt finished with 16 points, 10 of them in his big third.

VanNoy and Ayers finished with four points each as Williams netted three.

For Troy they face Waverly next Monday before traveling to NP-Liberty in the first round of the NTL Showcase the following Thursday.

NP-Mansfield is done until districts where Burleigh is hoping they can make some noise.