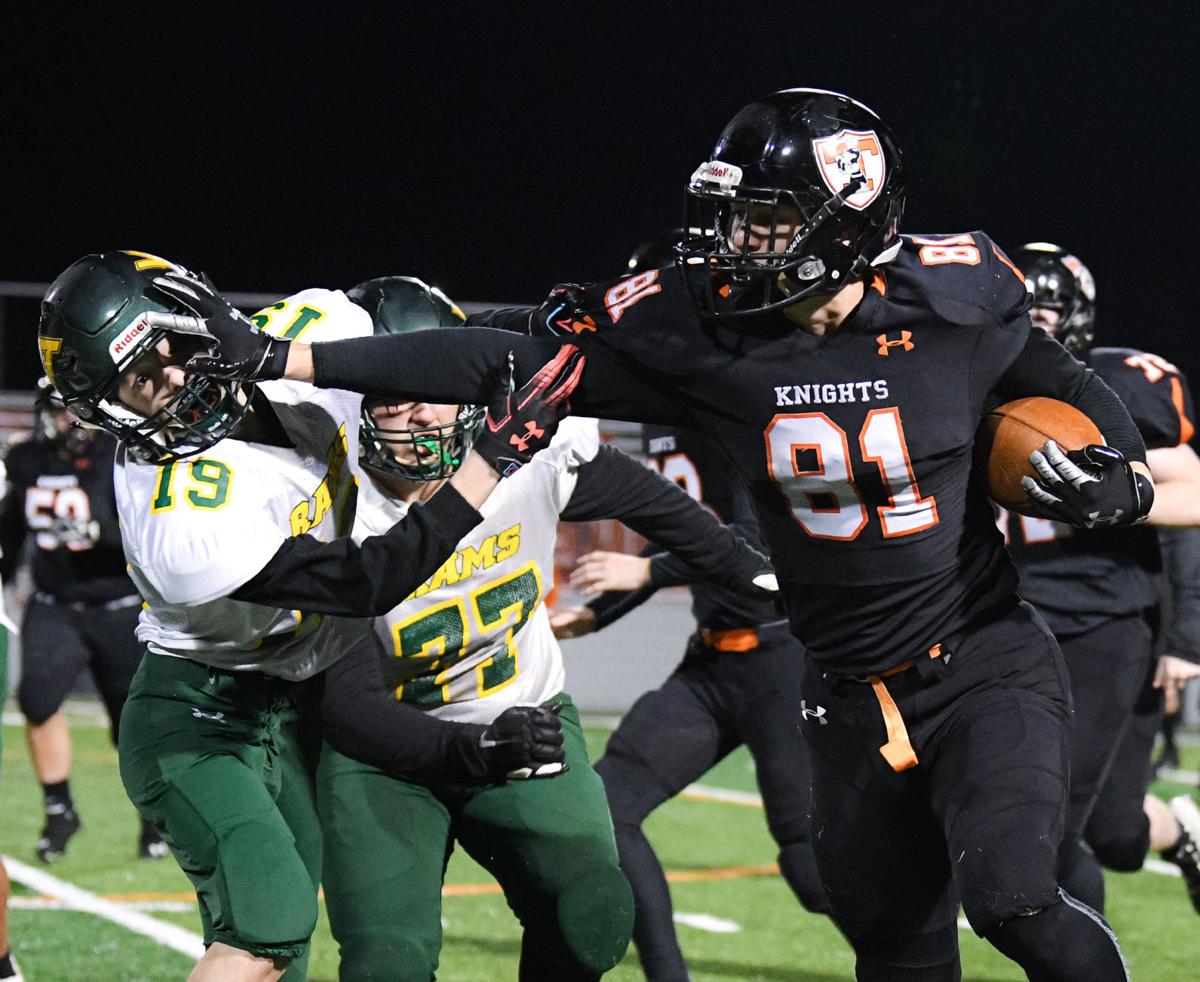 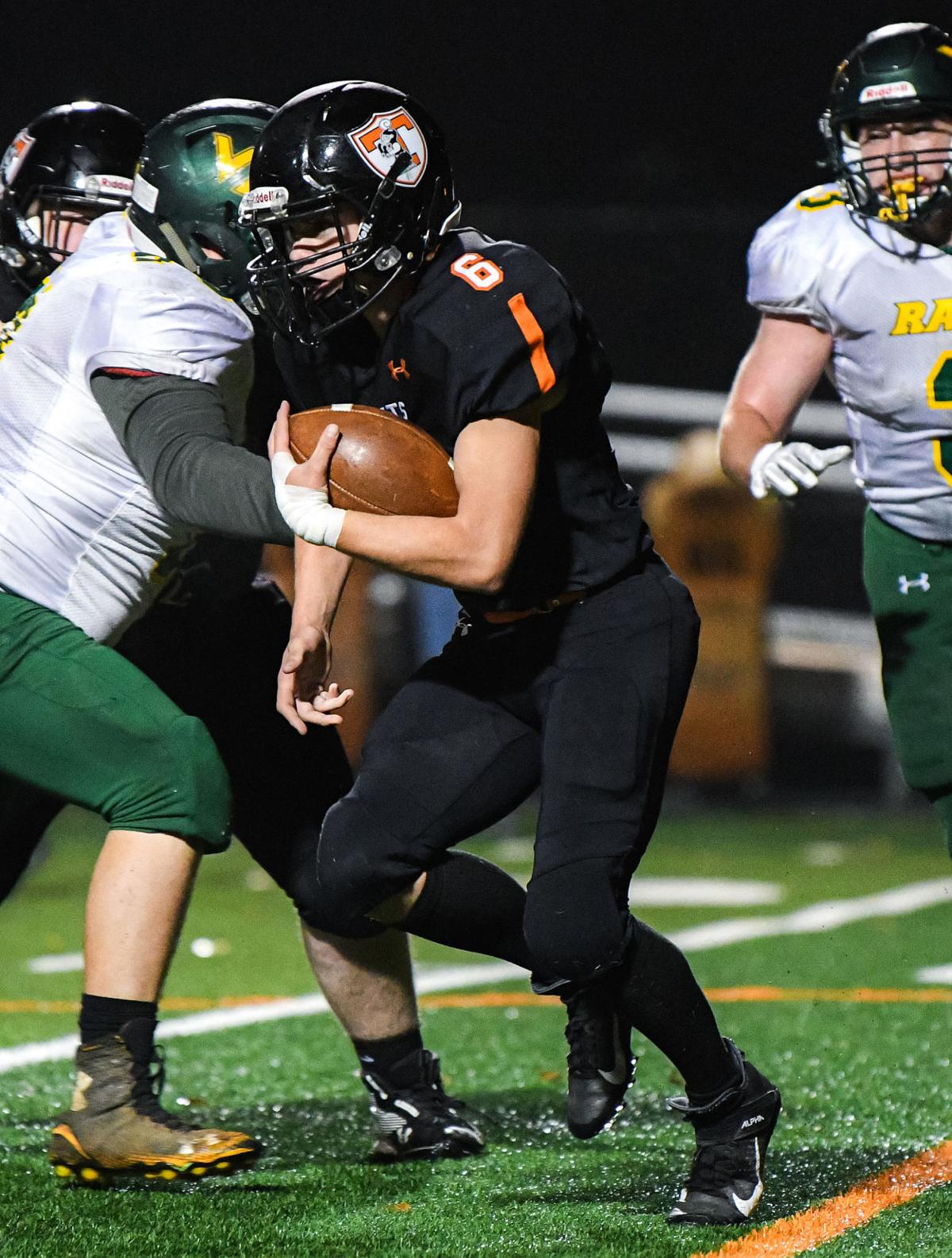 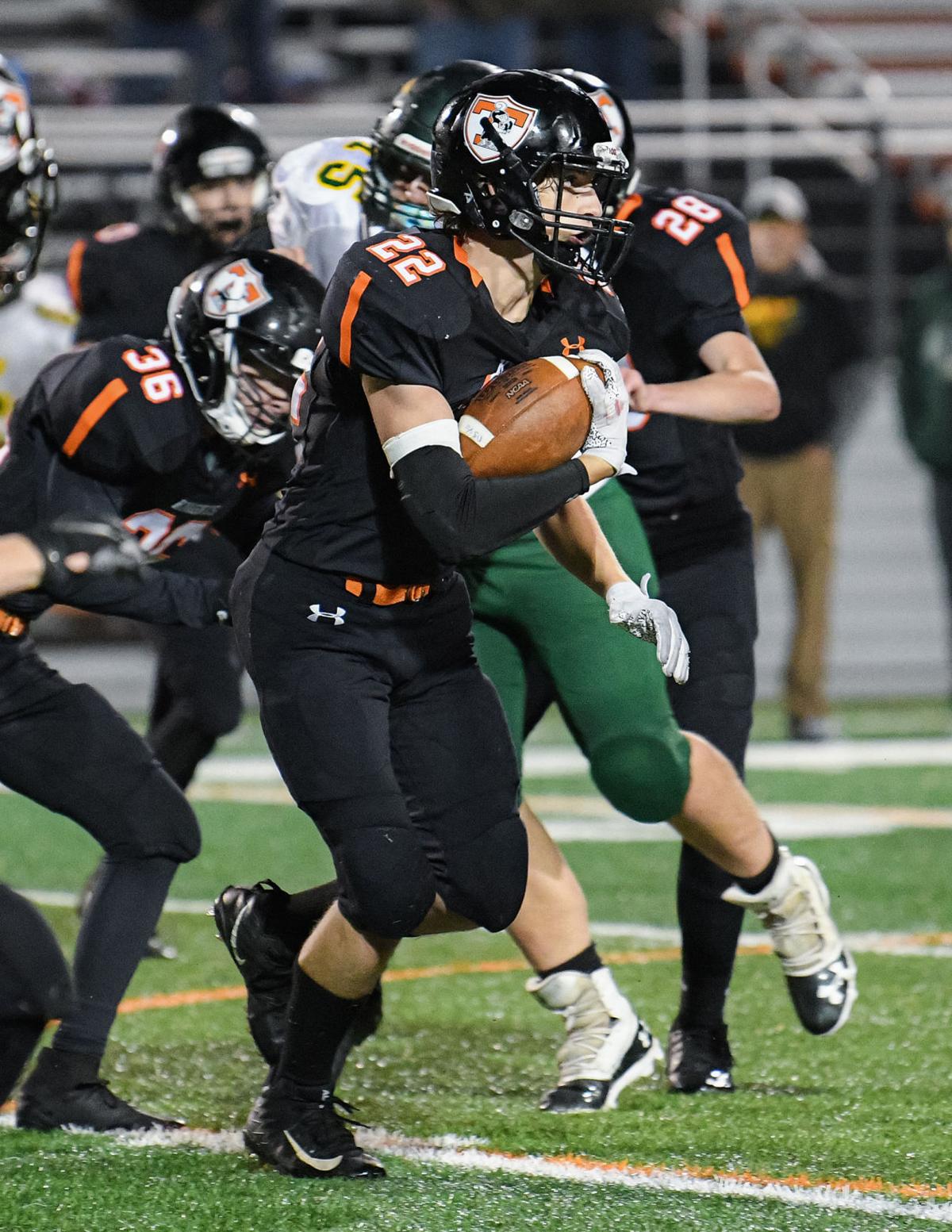 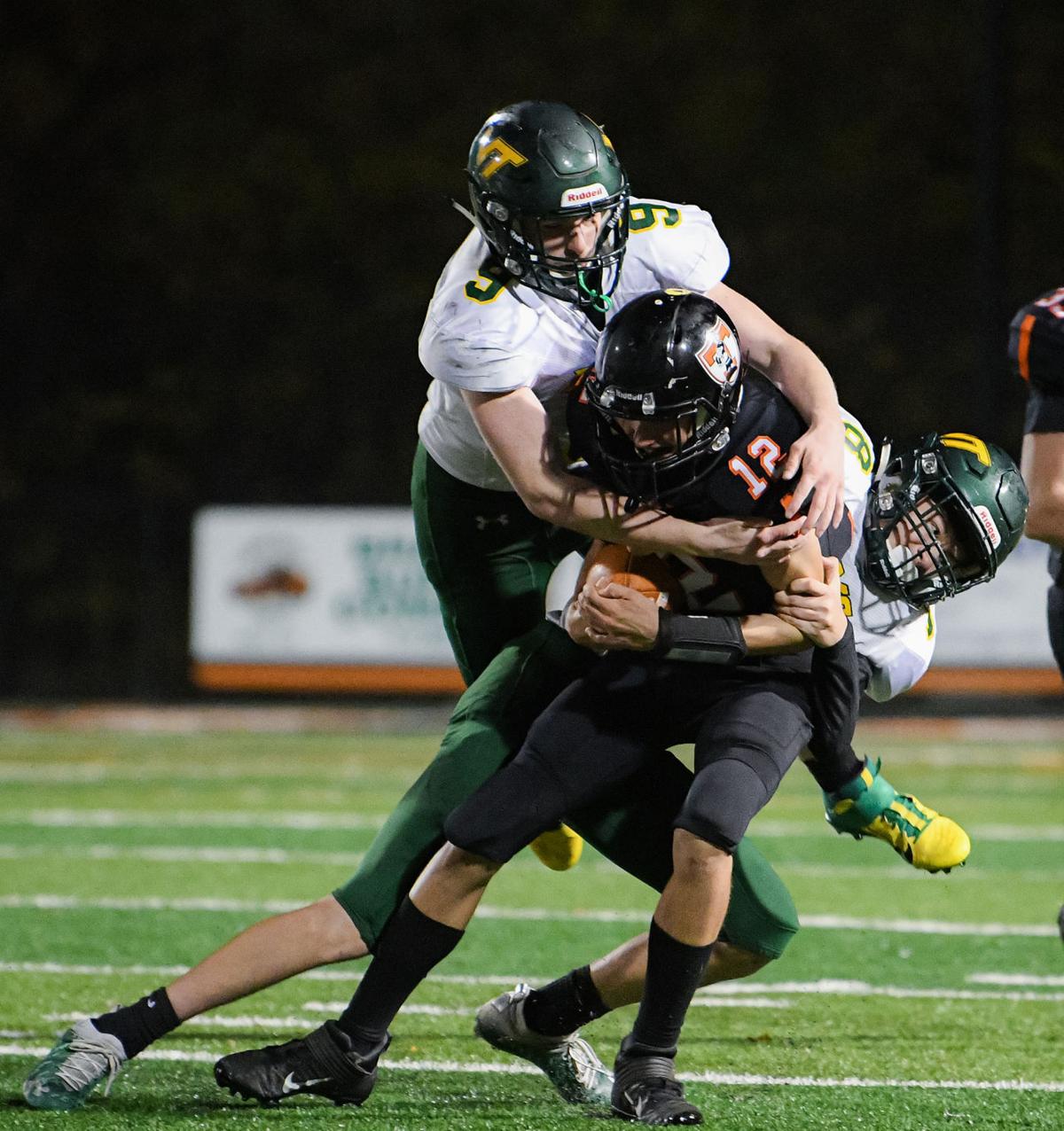 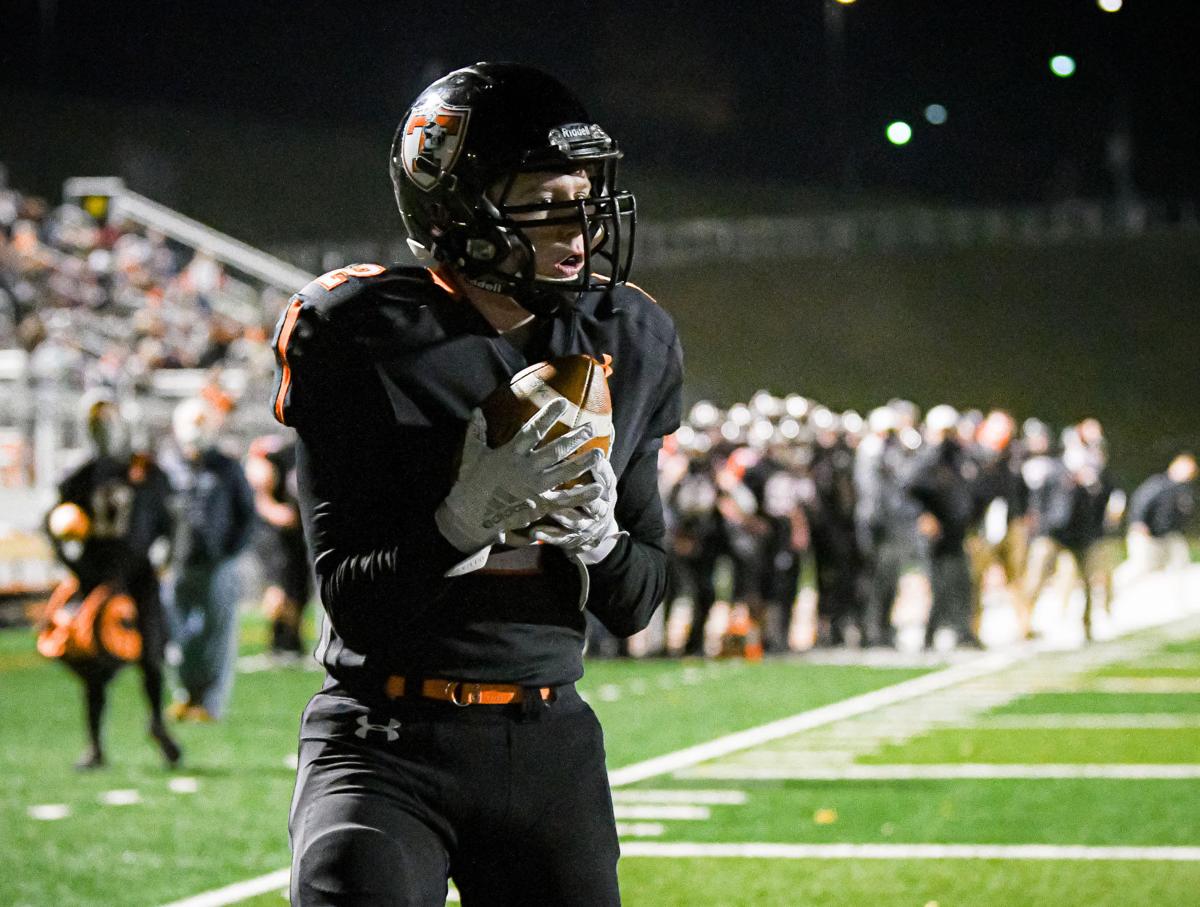 TOWANDA--One week removed from a 43-0 loss at Wellsboro, the Towanda varsity football team found themselves back at home on a Friday night still in search of their first win of the season.

Temperatures dipped below 40 degrees Fahrenheit, but the Black Knight offense finally found their rhythm to turn in a red-hot performance over the Columbia Montour Vo-Tech Rams. A huge three-touchdown third quarter lifted them to their first victory of 2020 over the Rams by a score of 45-8.

It took Towanda just one drive to get on the board first early in the first frame. A crisp running game tuned up the offense to set up a 13-yard touchdown pass from sophomore quarterback Mitchell Mosier to senior receiver Ethan Sparrow. That play gave the Black Knights a 6-0 edge at the end of the first. It ended up being a microcosm of what would be a great game through the air for the young quarterback.

“He’s just getting better all of the time,” Towanda head coach Craig Dawsey said of Mosier. “We put him at backup quarterback in July not knowing that our starting quarterback would go down. Mitchell was thrown into a really tough situation, but he’s a really tough kid mentally, and he’s getting it done.”

In the second quarter, the Black Knights were once again able to pound the ball in the red zone, but unable to connect on a touchdown. They instead settled for a 23-yard field goal from sophomore Logan Lambert to give them a 9-0 lead at the half.

Towanda saw an offensive explosion in the third quarter, where they were able to find the endzone three times. The first was on a senior receiver Trent Kithcart 5-yard run. Two offensive plays later, Mosier found Kithcart in stride for a 29-yard touchdown pass. On the next drive it took the Black Knights just one-play to take it to the house. Junior running back Rhyan West went 91 yards untouched to give his team a 31-0 lead heading into the final period of play.

In the fourth quarter, it was CMVT who drew first blood on a 3-yard run from senior running back Jake Shotwell. Shotwell carried the ball 10 times in that drive alone to ensure the Rams would not go down without a fight. A good return on the ensuing kickoff would set up the final touchdown of the evening which was engineered by sophomore Wyatt Delameter for Towanda off a 1-yard run. That was the nail in the coffin as the Black Knights secured the win by a score of 45-8.

Shotwell accounted for most of the Ram offense as he went for an outstanding 147 yards on 24 carries. Mosier got the Towanda passing attack in a groove as he finished with two touchdown passes for a combined 42 yards. West led in the rushing department with 149 yards and one touchdown.

“From a momentum standpoint, this win is really big for us,” said Dawsey. “They get to smile and laugh a little more now, so that’s a good thing.”

With their first victory of a wild 2020 season, the Towanda Black Knights now move to 1-4 and will travel to South Williamsport next Friday night to take on the Mountaineers. The CMVT Rams will head to Shenandoah Valley on Tuesday night with their 0-5 record in search of their own first win.