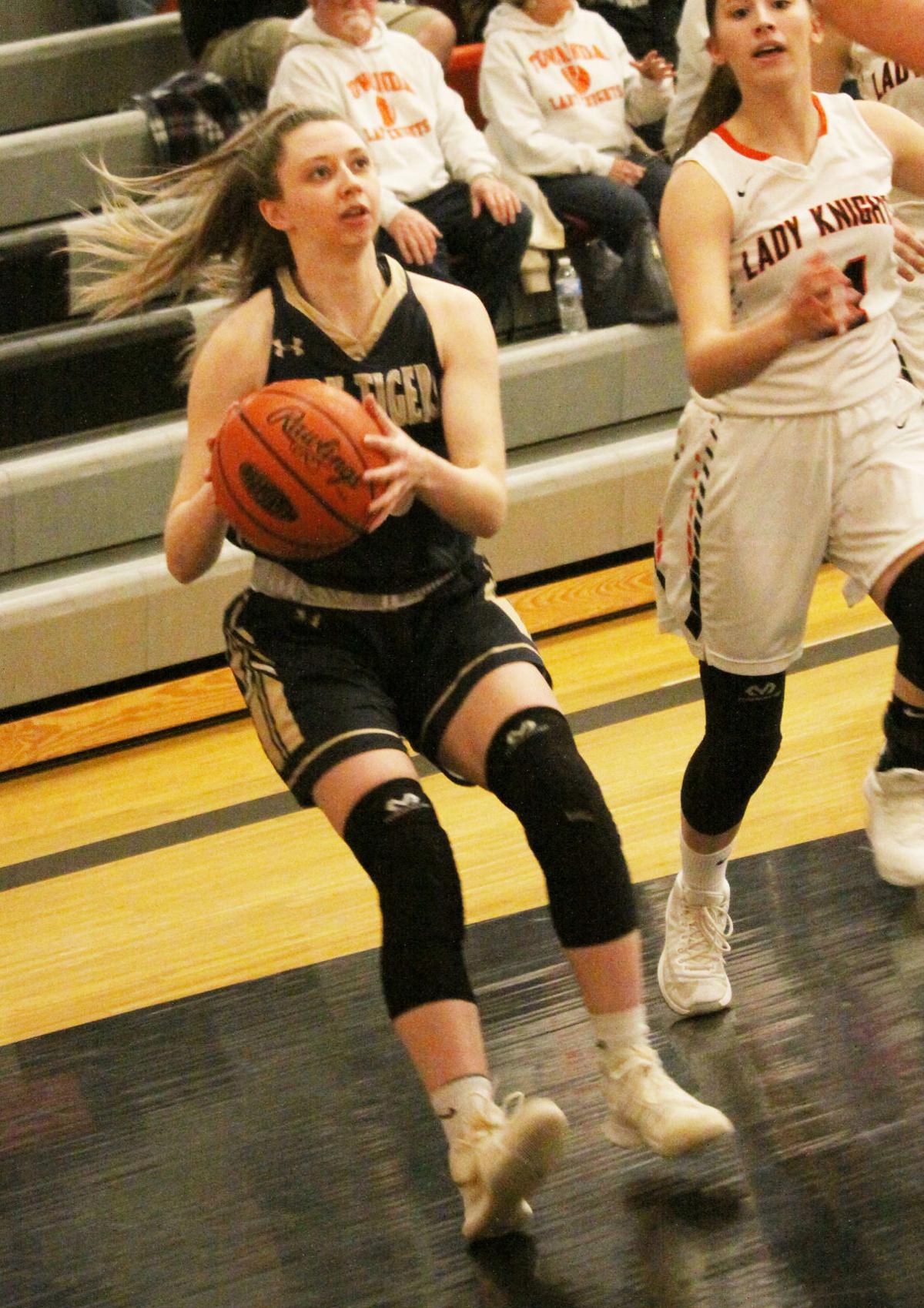 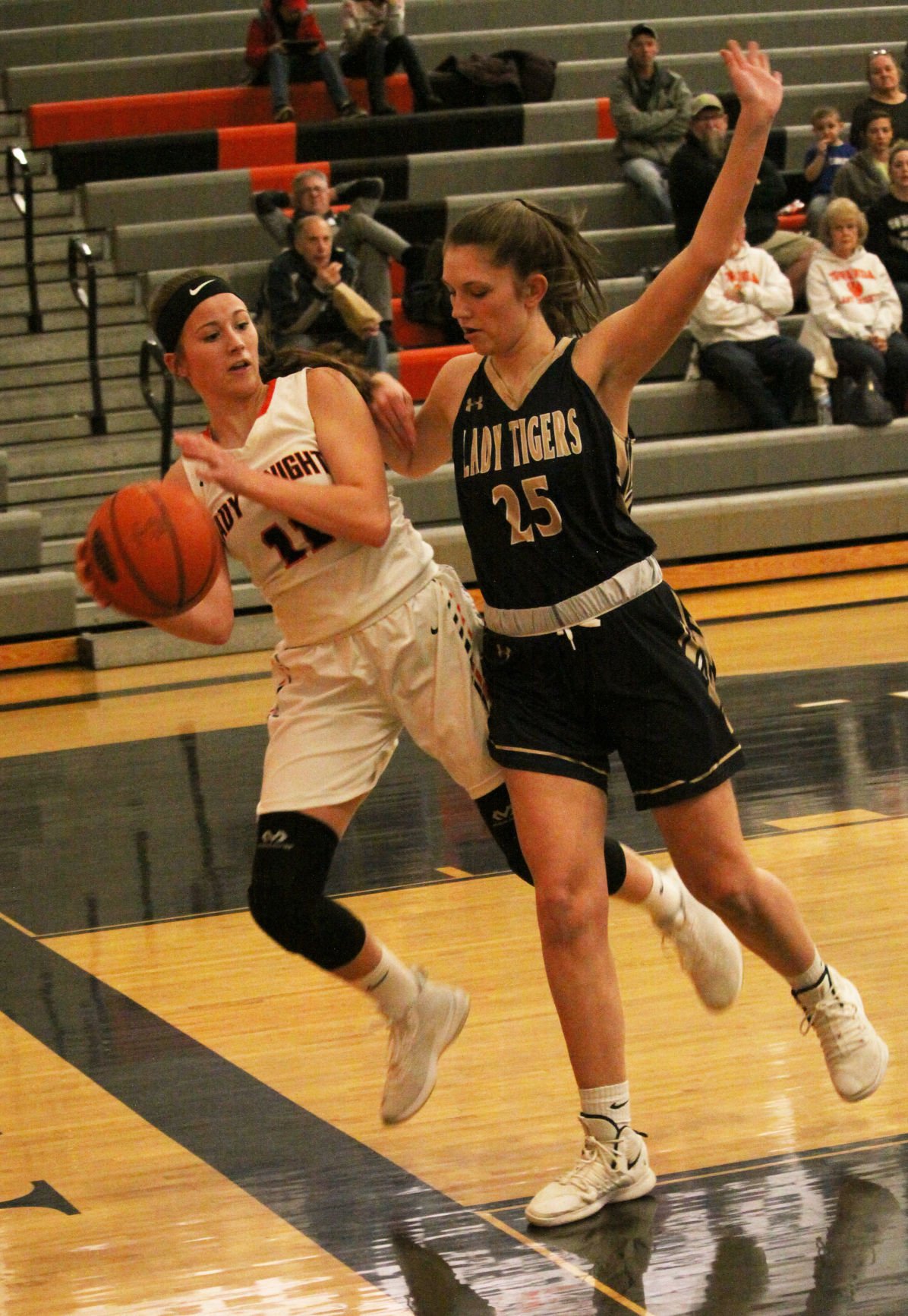 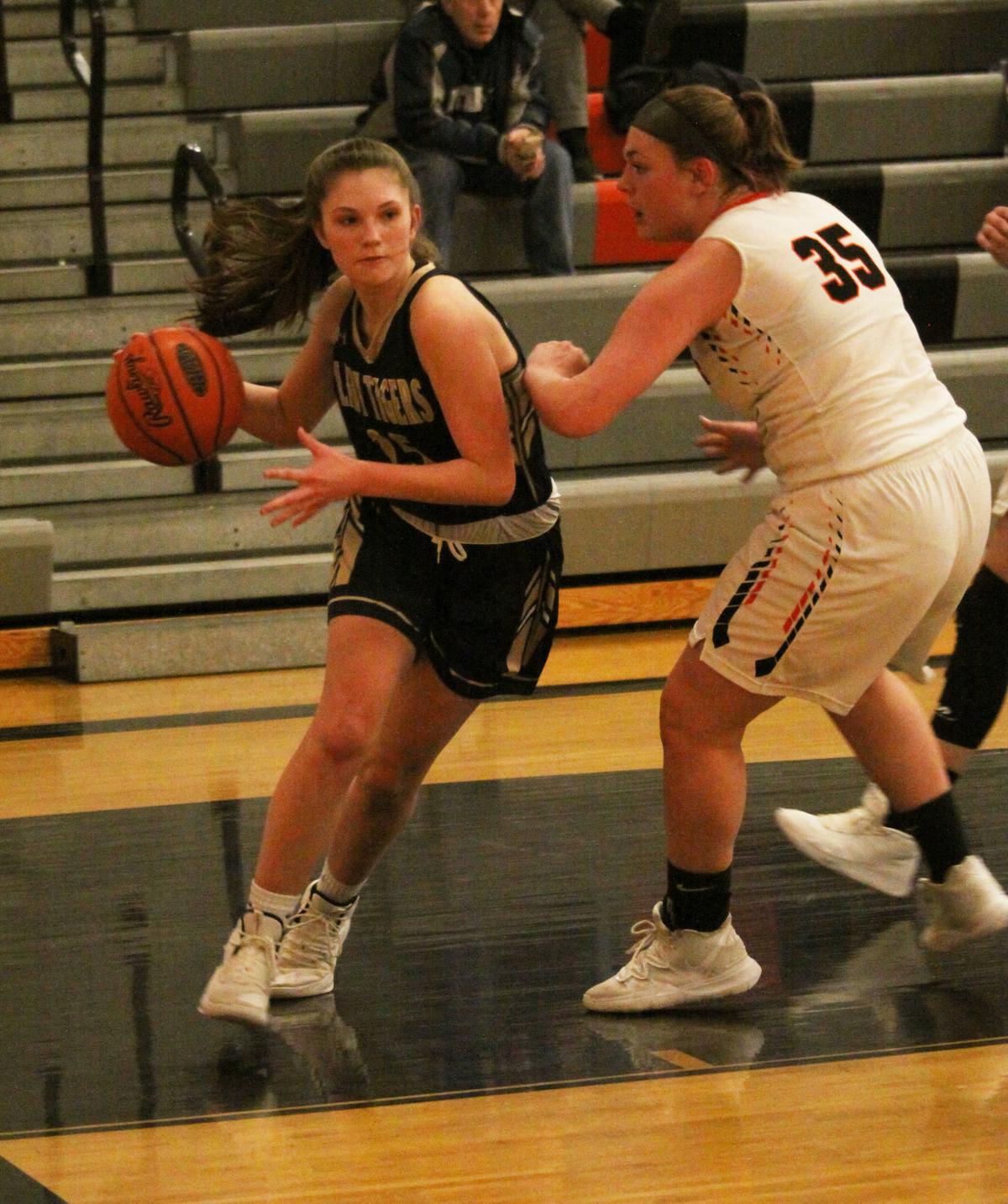 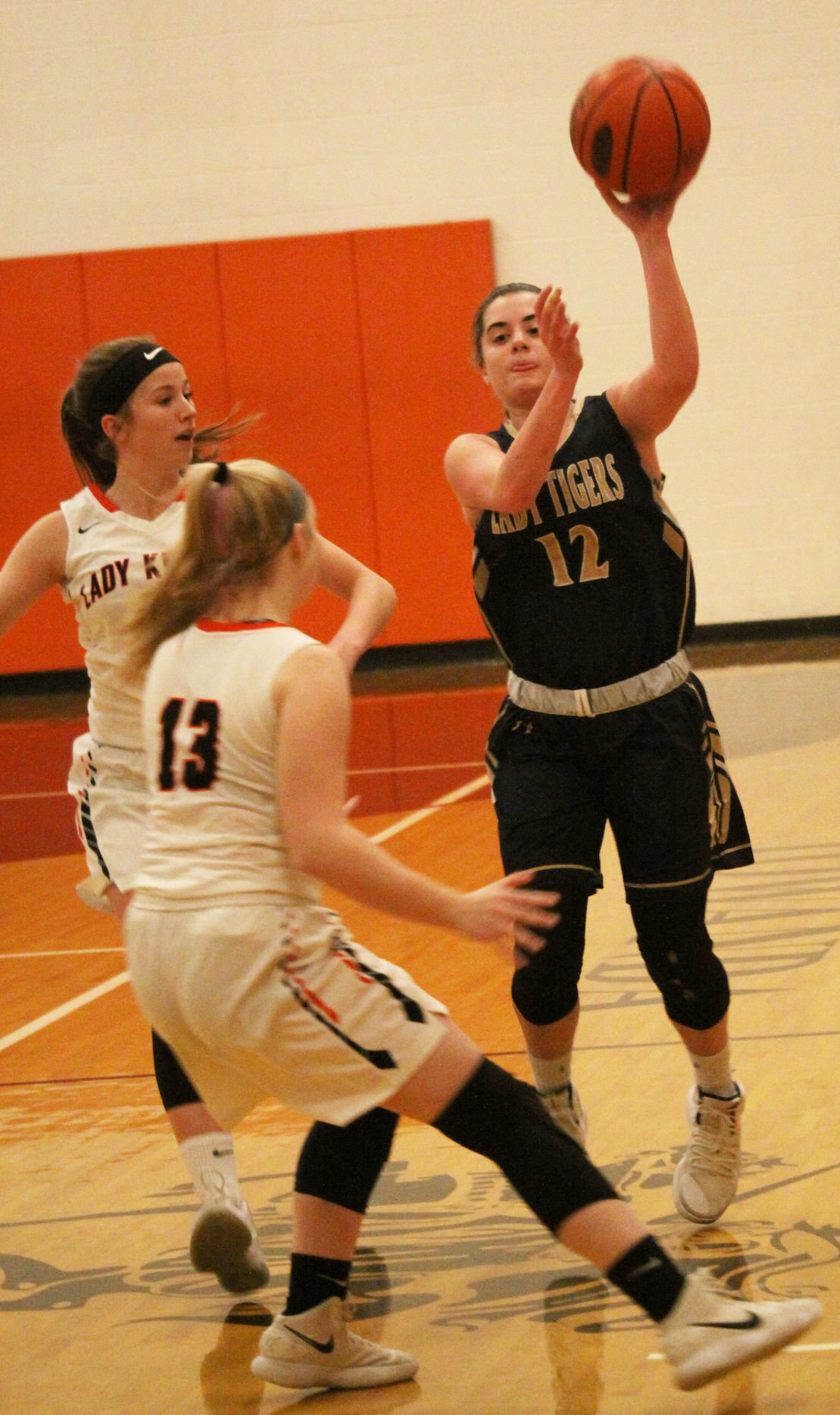 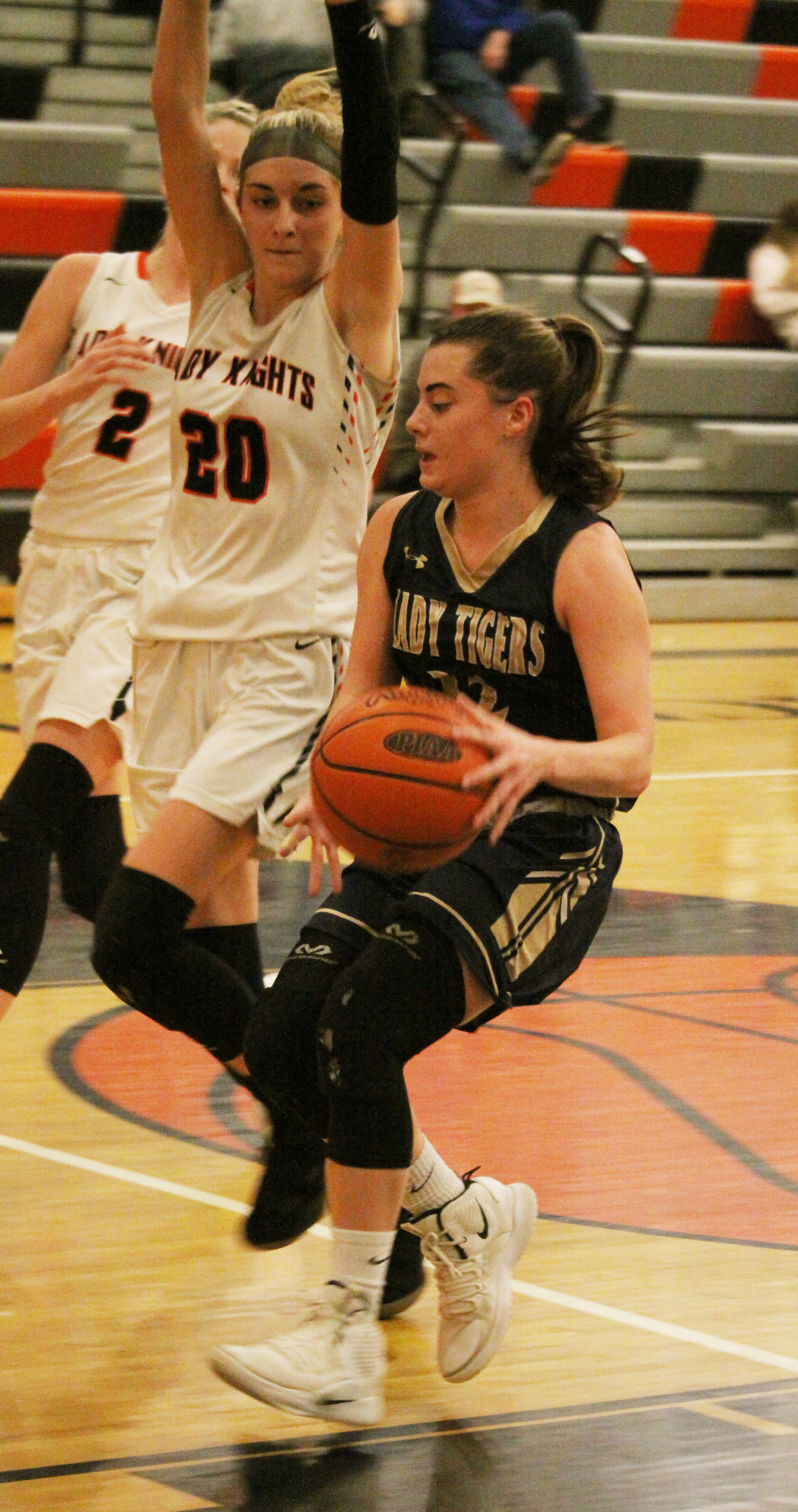 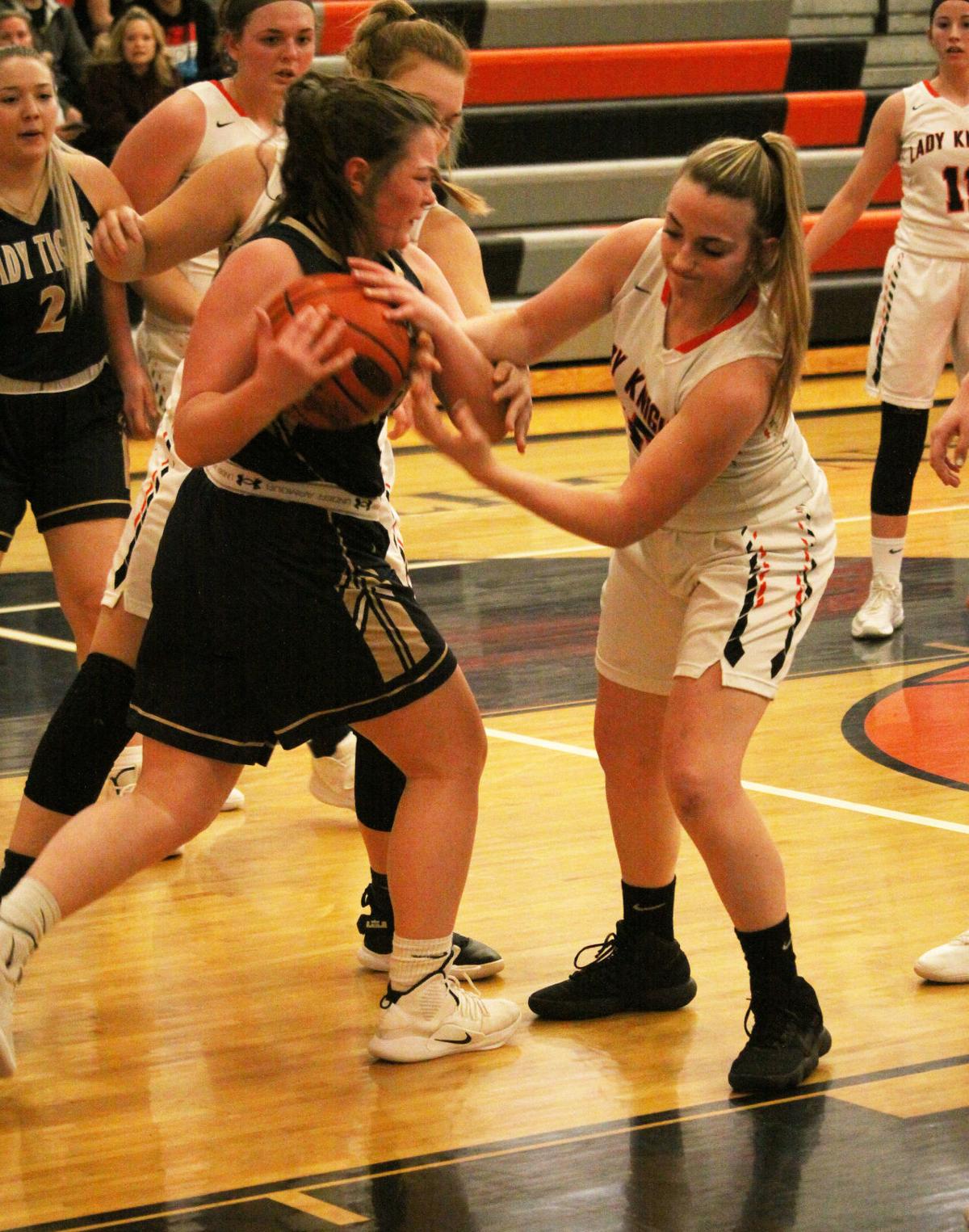 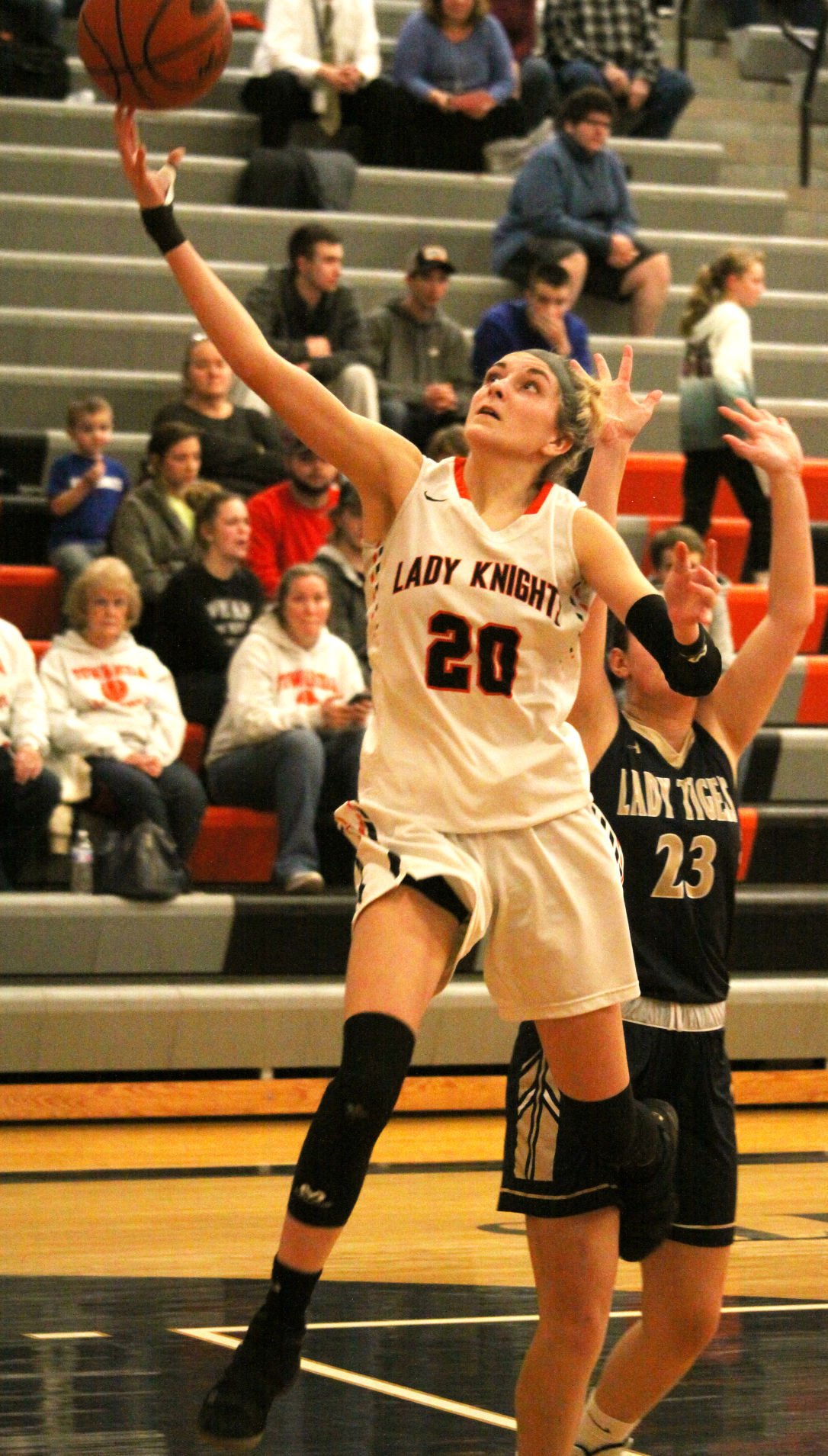 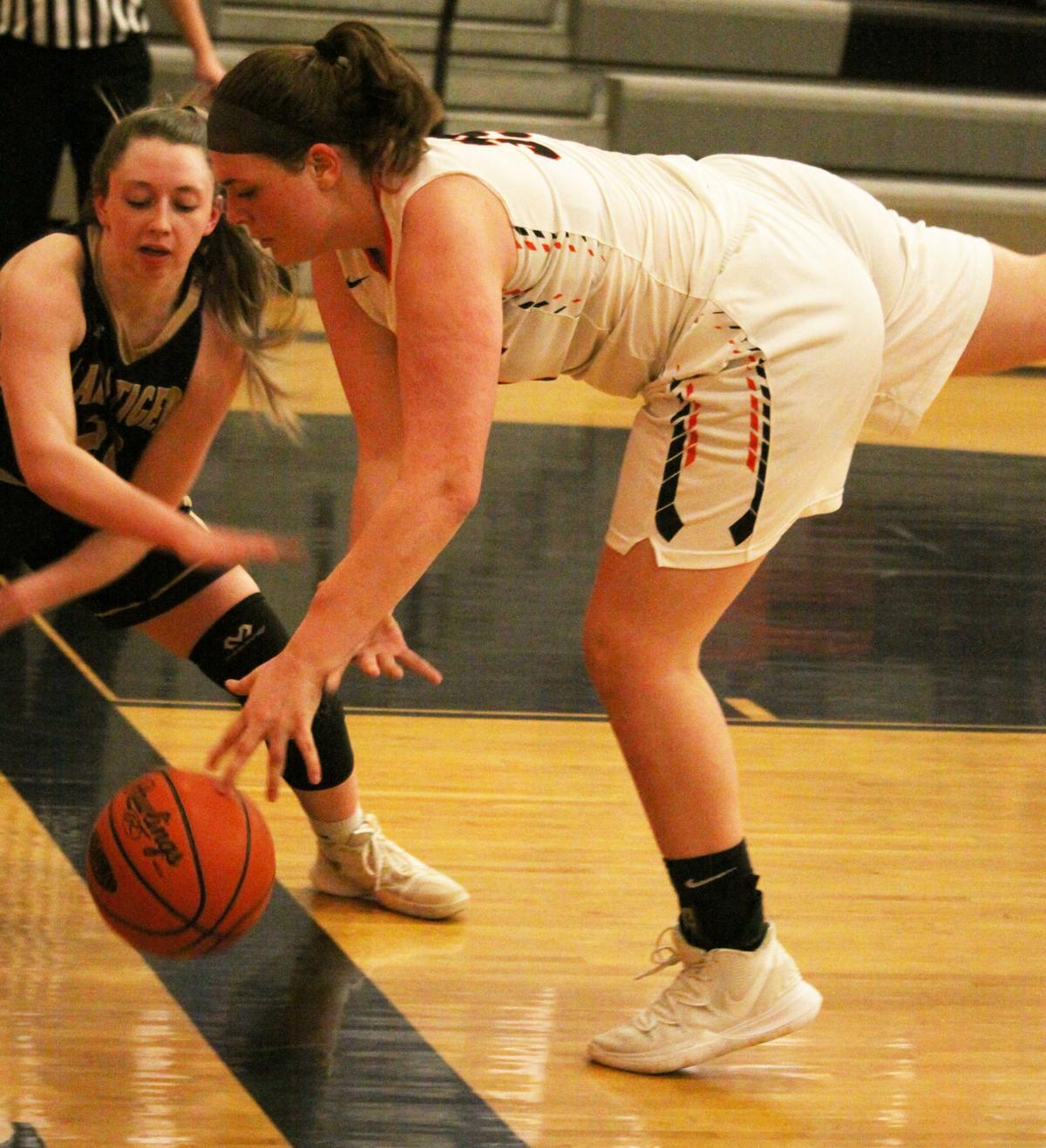 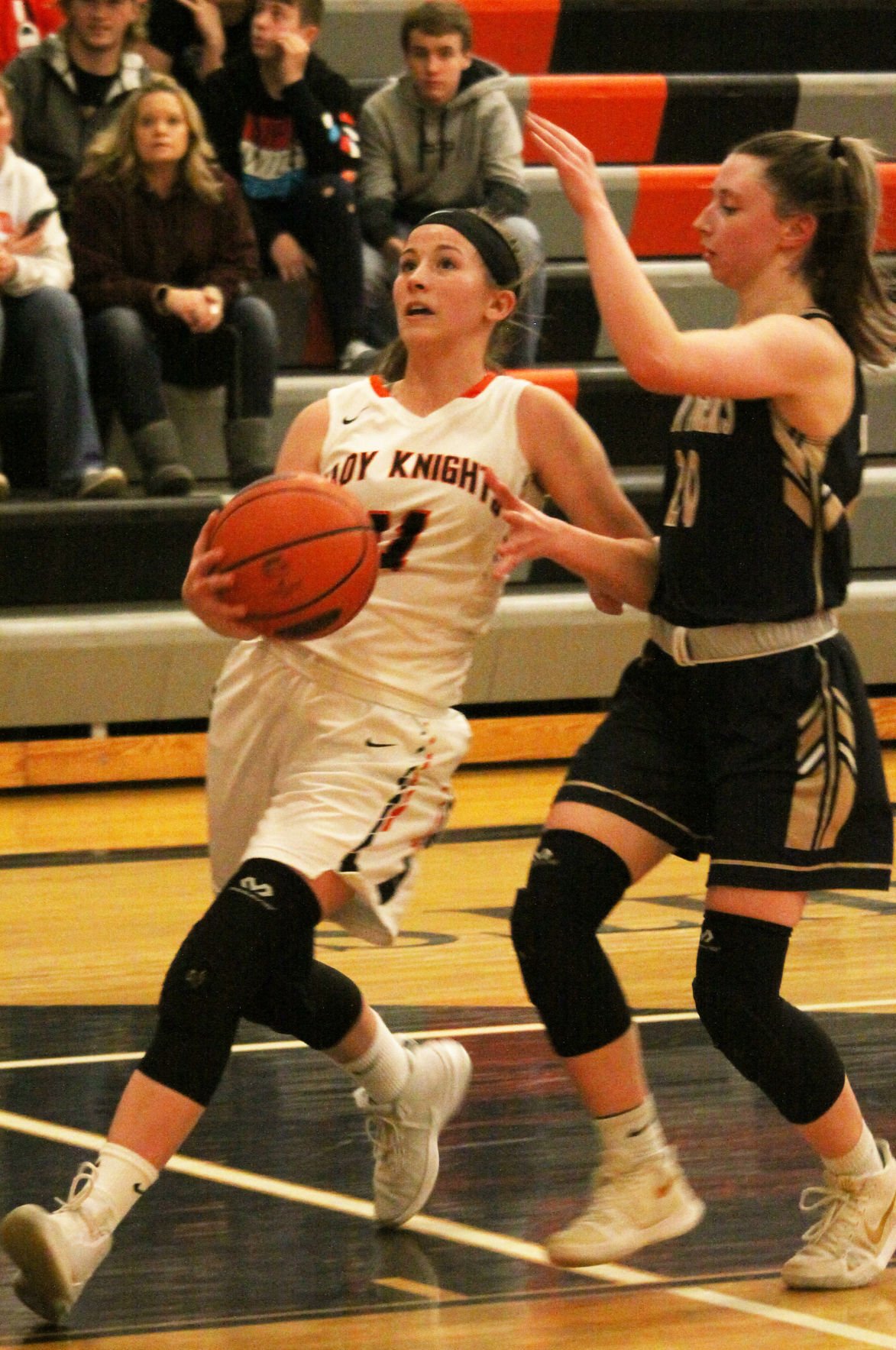 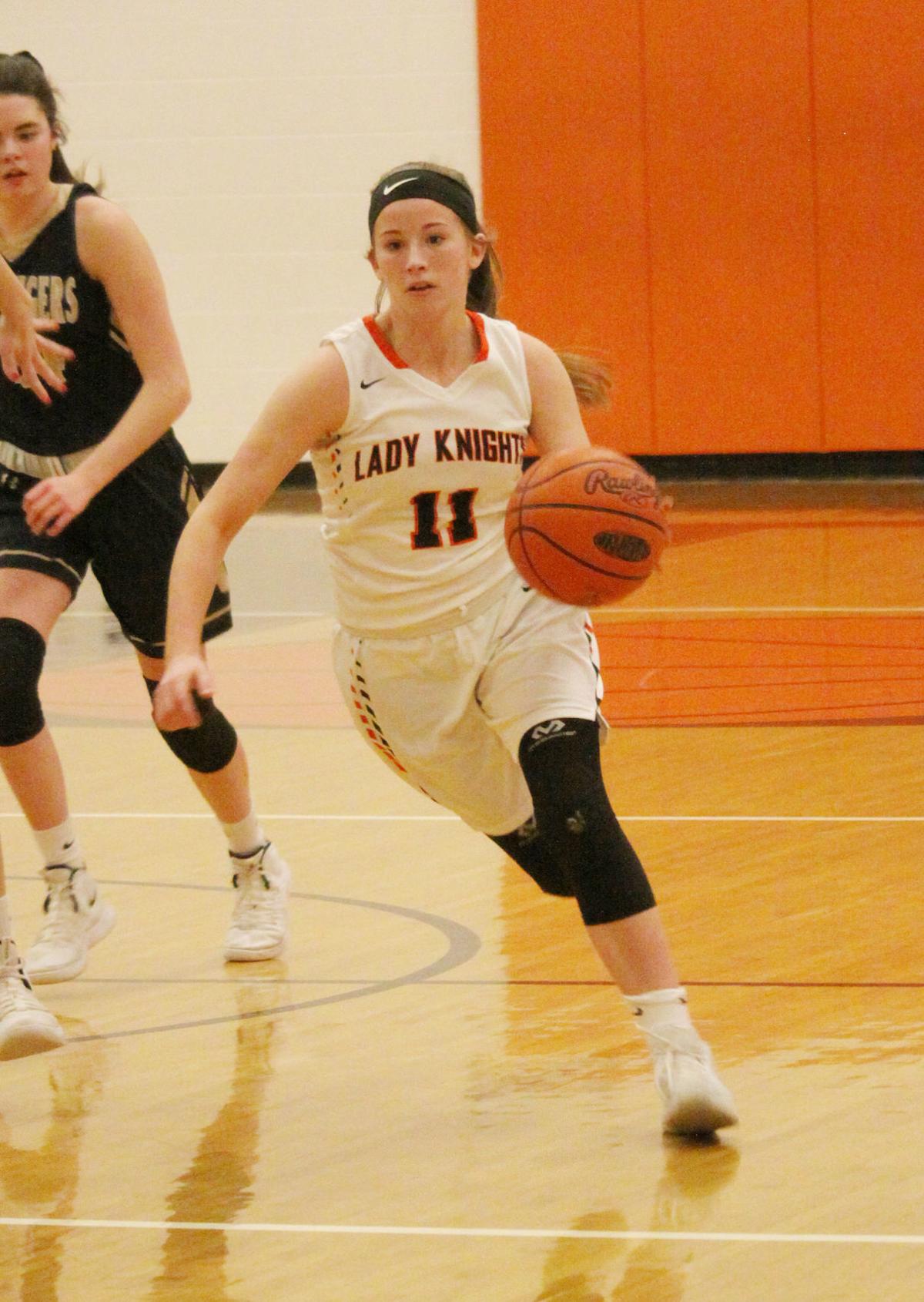 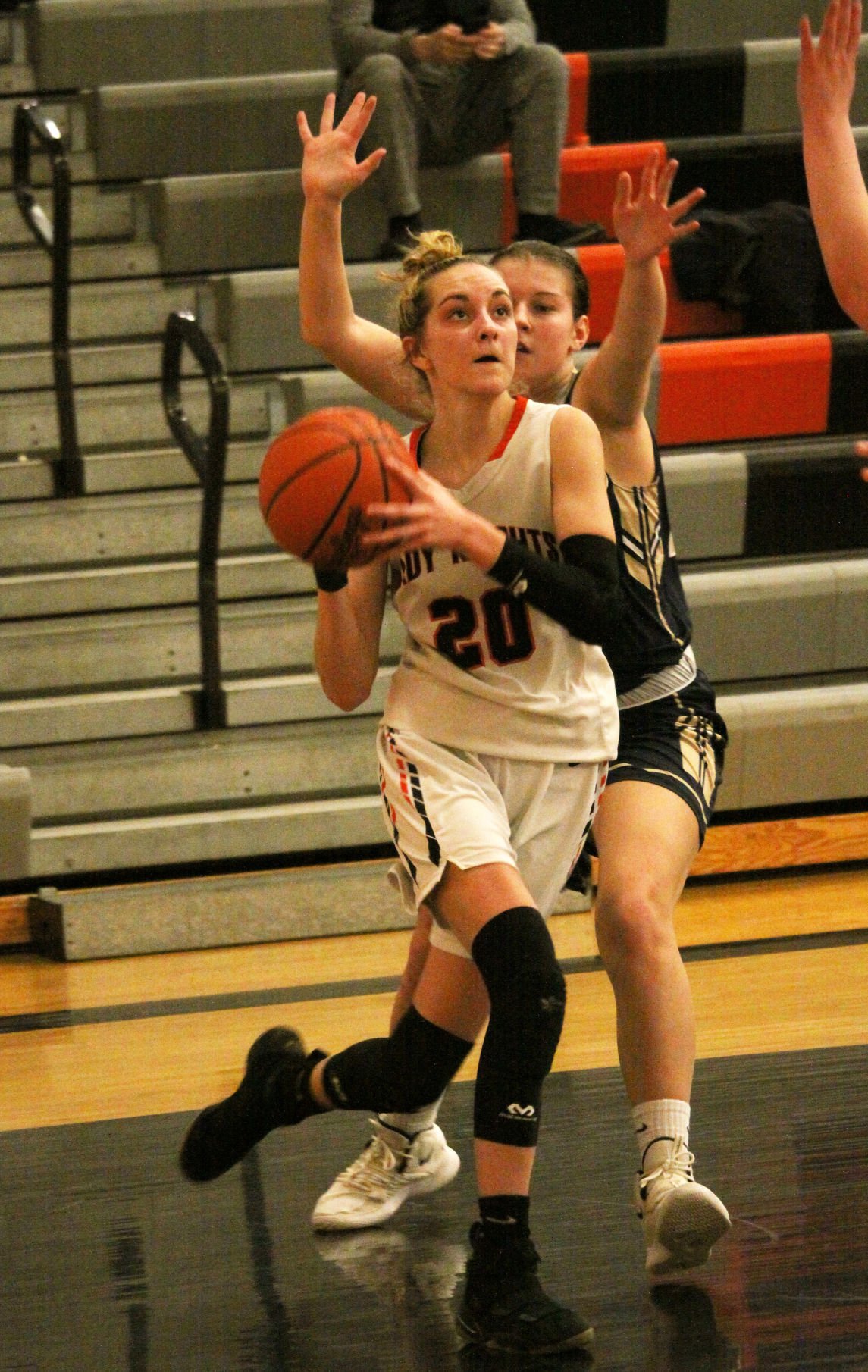 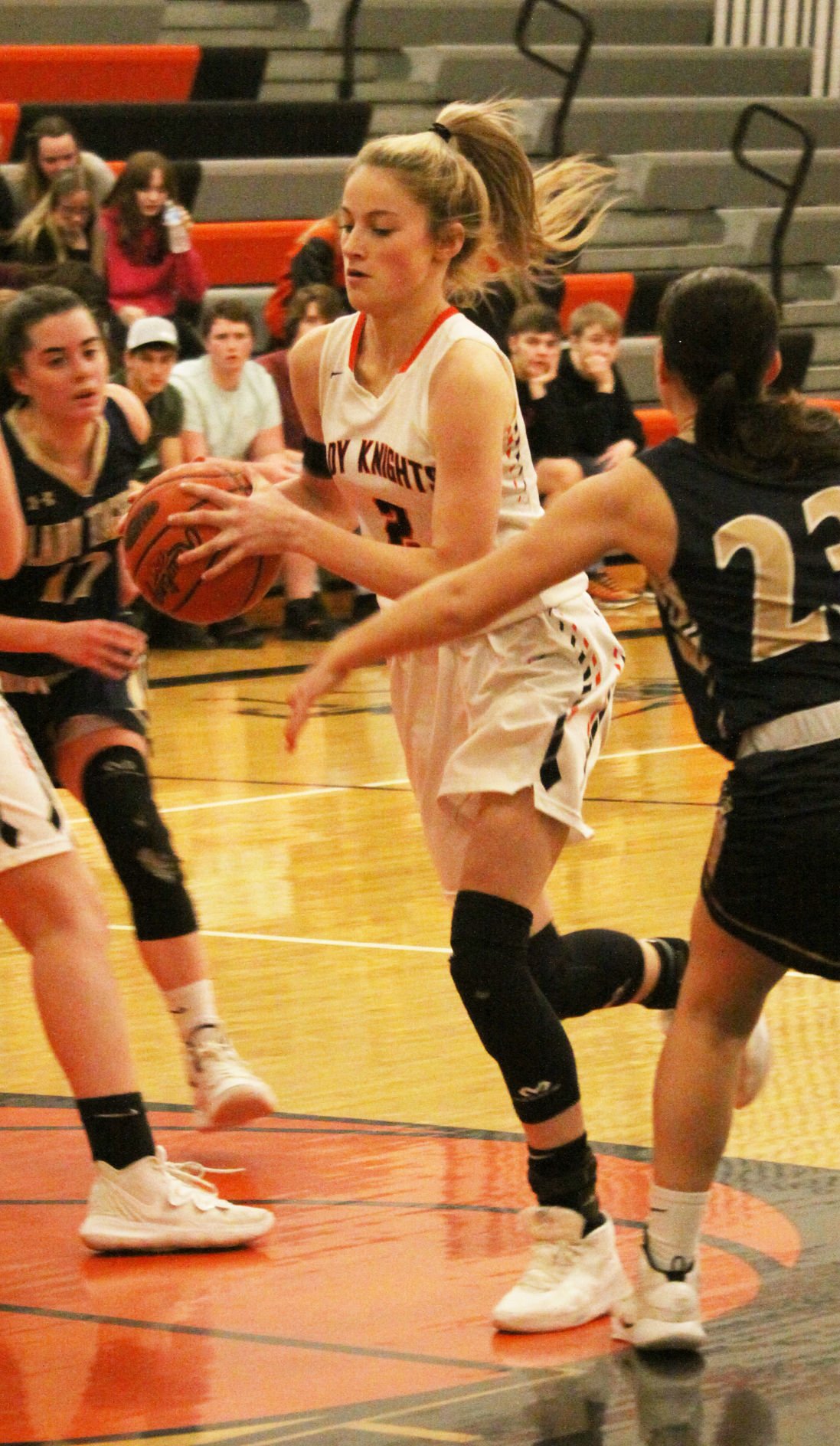 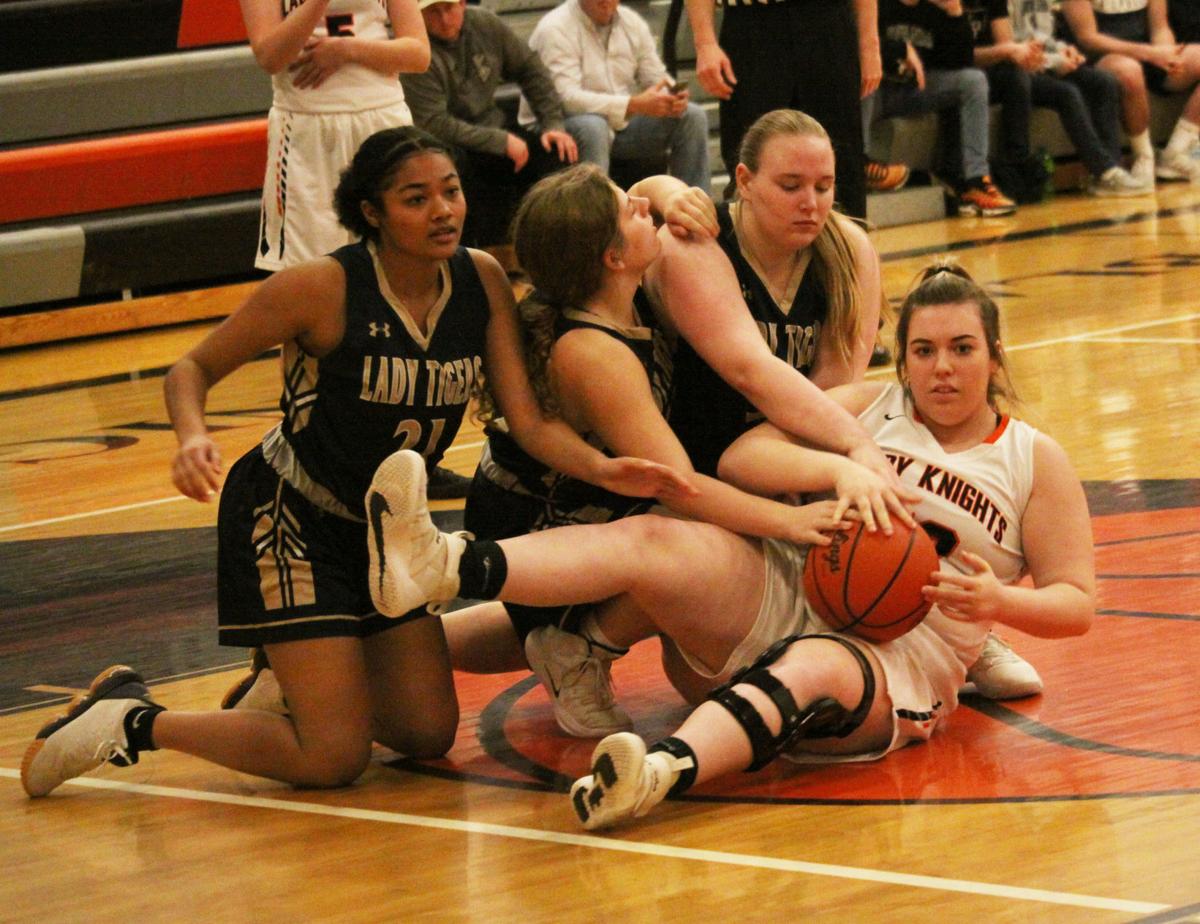 TOWANDA — All year long defense has been a focus for Towanda girls’ basketball.

Three months of honing their resistance and turning that into offense showed in their 61-44 win over NP-Mansfield in NTL Showcase semifinal girls’ basketball action Thursday.

“In my entire career we haven’t been to the showcase so it’s pretty cool,” said Towanda’s Erin Barrett.

The Knights’ got off to a fast start, survived some foul trouble in the second quarter and then surged in the third quarter to put the game away.

Amanda Horton added 11 points, including eight big points in the third, while Barrett came away with eight points, eight boards and six blocks.

Paige Manchester came away with nine points, despite foul trouble, with Gracie Schoonover and Maddie Maynard scoring two points each. Ally Hurley chipped in with one point.

“We had a tough loss to Tioga (Wednesday night) and it was good to see the girls bounce back,” said Towanda coach Rich Sutton.

NP-Mansfield could never solve Towanda’s defense and didn’t hit a 3-pointer until the fourth quarter, when they were already down by 20 points.

The Tigers finished with 25 turnovers and, despite playing tough half court defense to keep it close at the half, never got that big rally they needed to get into the game in the second half.

Towanda hounded them into turnovers in the open court while Barrett’s presence around the rim kept Mansfield from putting in lay-ups. Add in jump shots that weren’t falling made offense tough for the Tigers.

“We worked really hard on our press and we come up with a lot of defense to see whichever one we need and we pretty much had them locked down in the traps,” explained Barrett.

JoAnne McNamara had nine points to go with four assists while Shaelyn Berguson had 10 points and eight boards.

The game was chippy, and sloppy at times. In the fourth Barrett left the game with a cut above her eye.

“They were kind of letting everything fly,” she said.

Towanda jumped out to a 7-0 lead in the first minute thanks to two lay-ups and a Horton 3-ball.

Emma Palmer got NPM on the board off a McNamara assist but the Knights scored the next six points off buckets from Barrett, Manchester and Bennett to make it 13-2 with 3:45 left in the opening quarter.

A pair of Emma Palmer free throws stopped the bleeding but the Knights went on a 7-2 run over the last 3:25 of the quarter, anchored by four points from Barrett, to make it 20-6 after one.

The Towanda offense has boom or bust this year and from the late first quarter into the early second they went bust, not scoring for nearly four minutes.

That allowed the Tigers to get back into the game as they went on a 6-0 run to start the second quarter.

Jaime Palmer hit back to back buckets followed by a Kahl lay-up cut it to 20-12. Chandler and Manchester came back with buckets for Towanda to push their lead to 24-12 with 5:20 left to play.

It stayed there for three and a half minutes as neither team was able to put the ball through the hoop.

NP-Mansfield kept turning it over while the Knights watched their shots clang off the rim.

Finally, with 1:58 left to play Manchester put in a shot for Towanda to end the drought and pushing their lead to 26-12.

It was only free throws after that with Towanda hitting three and NPM two for a 29-19 halftime lead for the Knights.

Foul trouble reared it’s head for Towanda as Barrett and Manchester both picked up their third fouls in the second quarter.

The Knights came out strong out of the half, scoring the first 10 points in two minutes to push their lead to 37-19.

There was little scoring the second half of the quarter with the Knights earning a 5-3 edge for a 47-24 lead.

NPM looked to get some momentum late but a Chandler jumper just before the horn pushed the Towanda lead to 47-24 with eight minutes to play.

Barrett and Manchester were also on the bench with four fouls each, giving them a tight window to get back into the game.

A McNamara 3-ball cut into it again but down the stretch Towanda held them to seven points to secure the win.

Sutton was pleased to see his team play a complete four quarters.

“We have a habit of coming out strong and getting a lead early,” he said. “Sometimes we give it up but today we were able to keep that momentum and never let them back in the game.”

The Knights will now get a rematch with Athens, 54-49 winners in overtime over NEB, at Mansfield University Saturday with a 6 p.m. start.

The teams split during the regular season — with the home team coming out victorious.

“We want redemption from our last time,” said Barrett. “We’re tied up because we both won one so it comes down to who plays harder, who plays better defense and who communicates overall.”