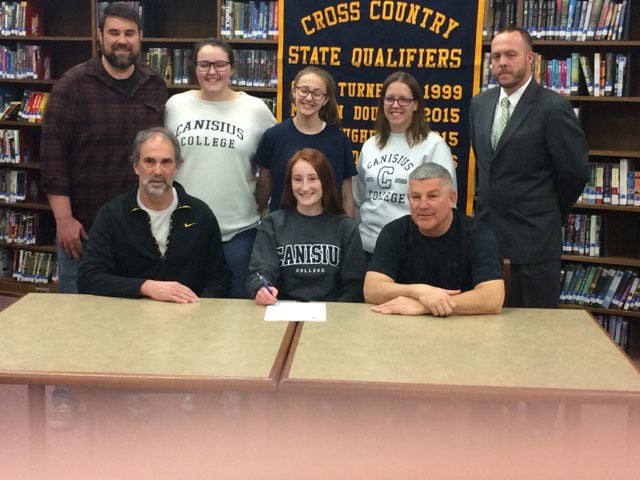 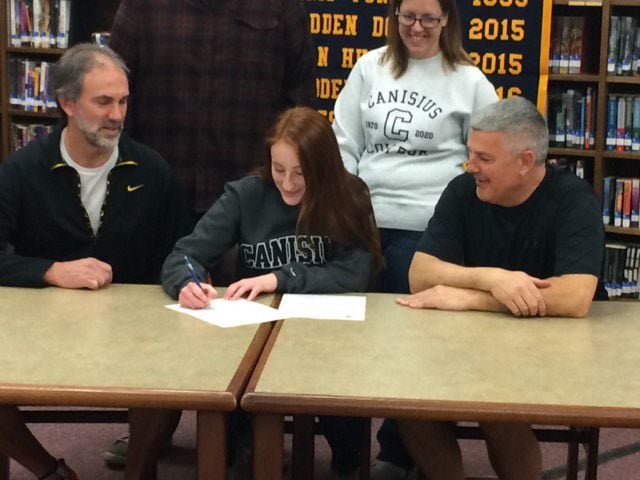 Jules Jones has been one of the premier runners on the track and in cross country in the NTL for her entire career. The multi-time state qualifier signed her National Letter of Intent to Canisius College located in Buffalo. The division one school is adding a runner that has not reached her potential yet, according to the distance coach for Williamson Track, Coach Kauffman.

“She’s going to be such a good runner in college,” he said. “She’s spread so thin right now. She does so much other stuff other than running that when she just focuses on that she will set all sorts of records.”

For Jones, Canisius was the perfect fit. Jones is a great student and Canisius is one of the elite liberal arts schools in the country. It also met her athletic goals.

“When I visited there, I just loved it. I loved the campus,” she said. “I love how it’s more urban than where I’m from. It will be different but it’s something I’m looking forward to getting out and seeing and experiencing something different.”

Running at the D1 level was something Jones

realized was possible for her pretty early on in her career.

“Even back in junior high this was a goal of mine. I started putting in the miles and I just love to run. It’s my stress reliever.”

Jones prefers the track to running on cross country, for serious and not-so-serious reasons.

“I like track because it’s more cutthroat and strategic,” she said. “In cross country, out there in the woods, I tend to get lost in my own thoughts.”

Running middle to long distance in college is hard work, as with indoor track, which Canisius has, the season never stops. Jones has been putting in the miles to make sure she’s ready.

In High School Track, there is only the 1600m and 3200m for long distance. In college, there is also the 5000m and 10k. However Jones has her preferences.

“I’ll do whatever my coaches tell me, but I would like to run the mile.”