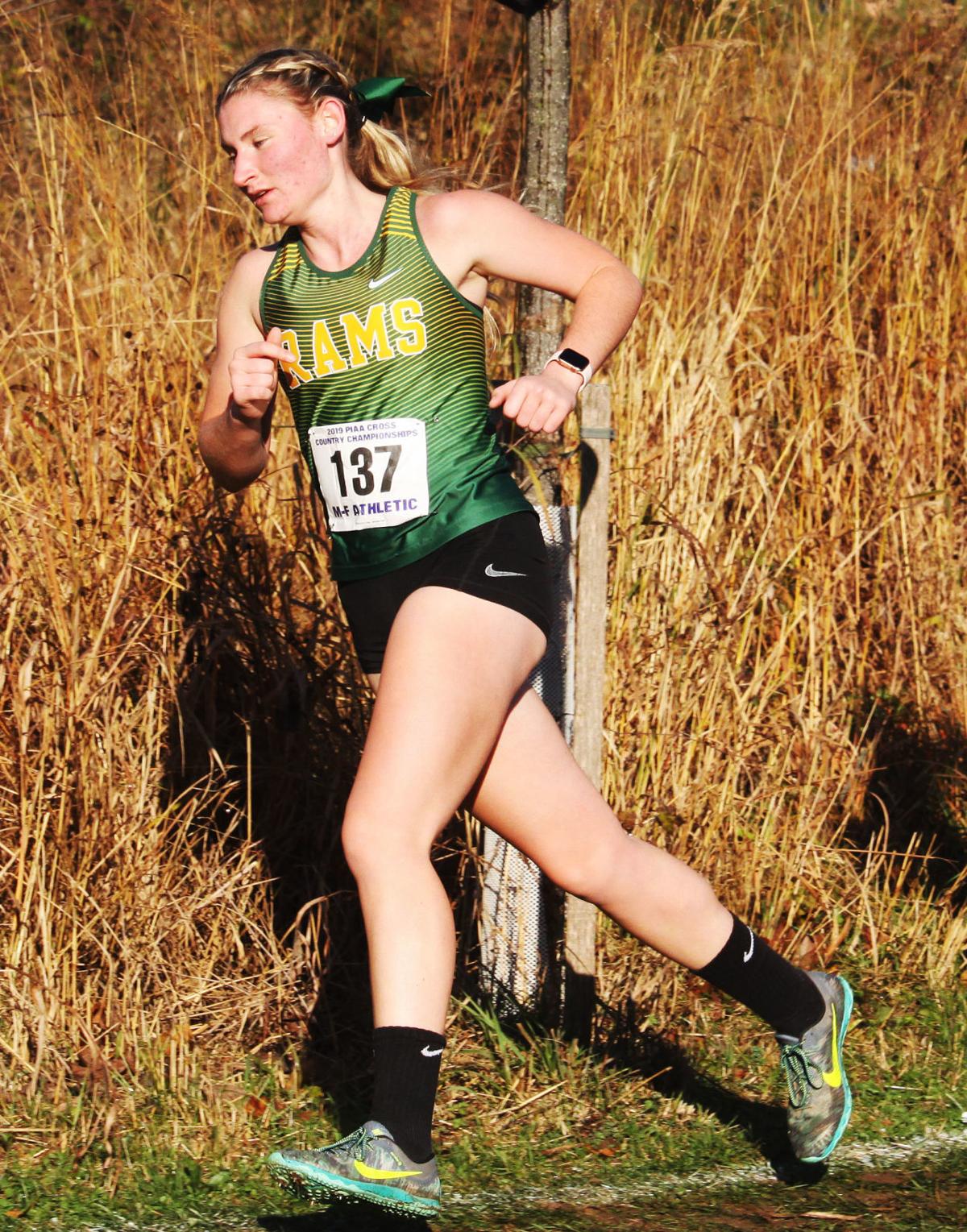 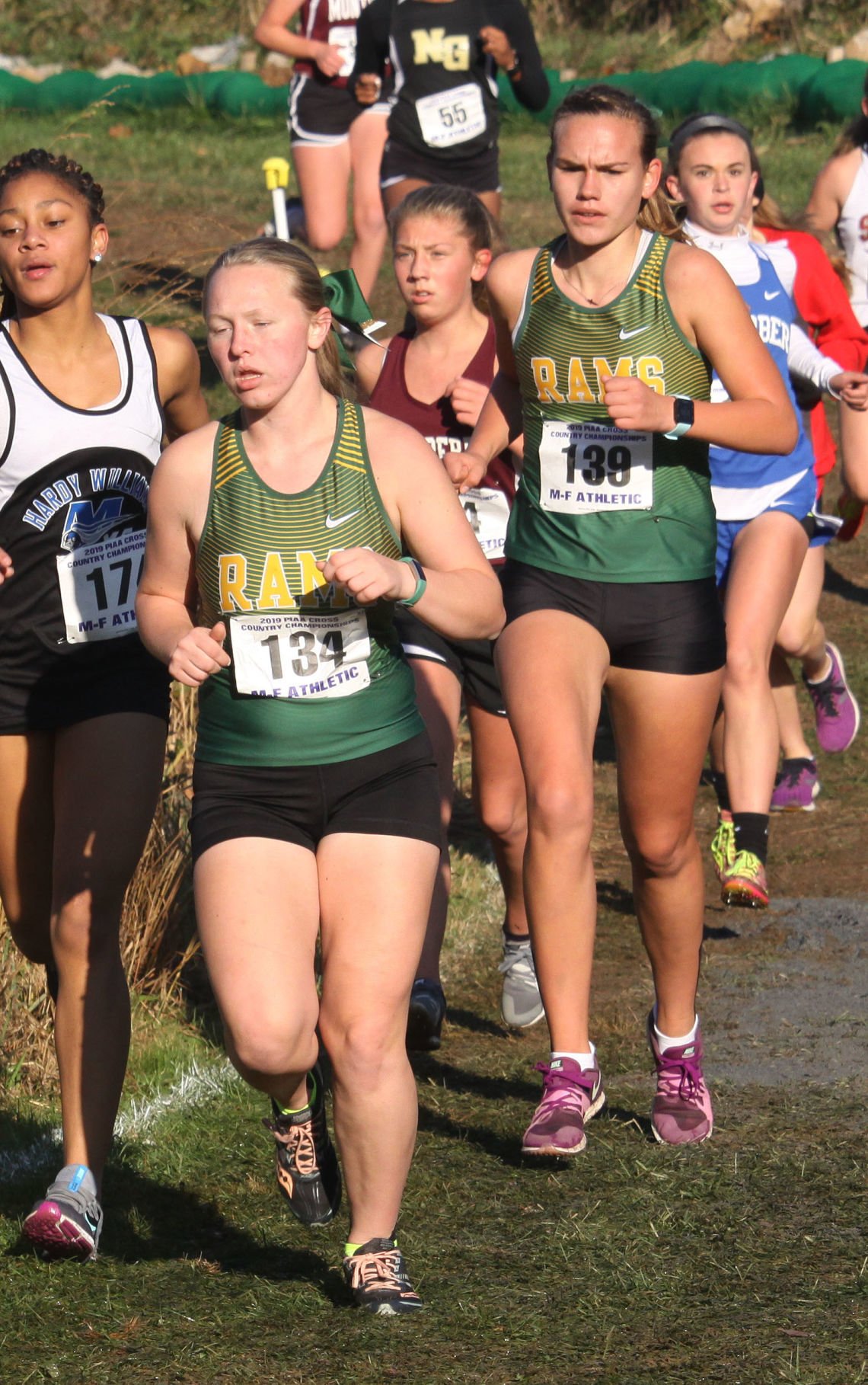 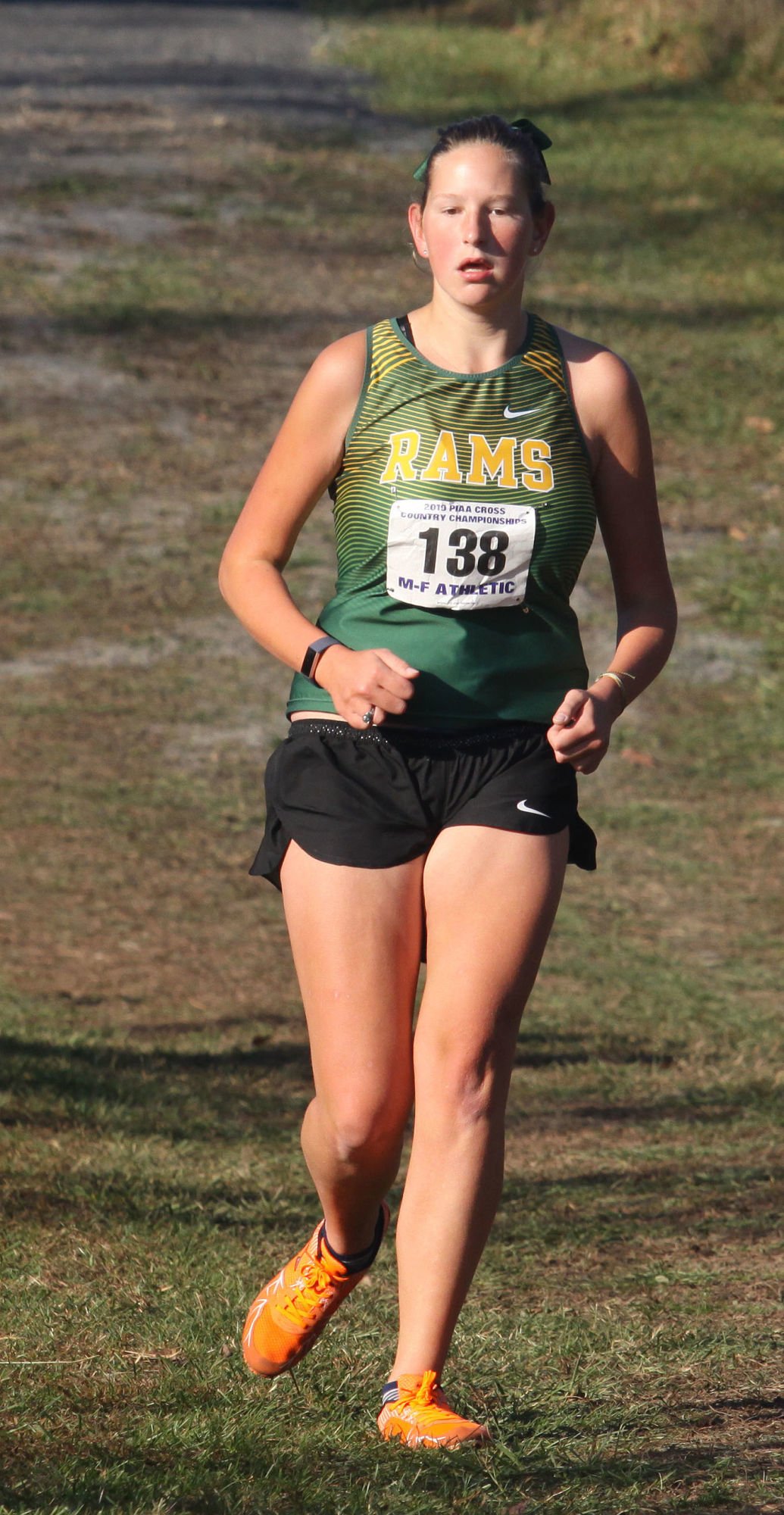 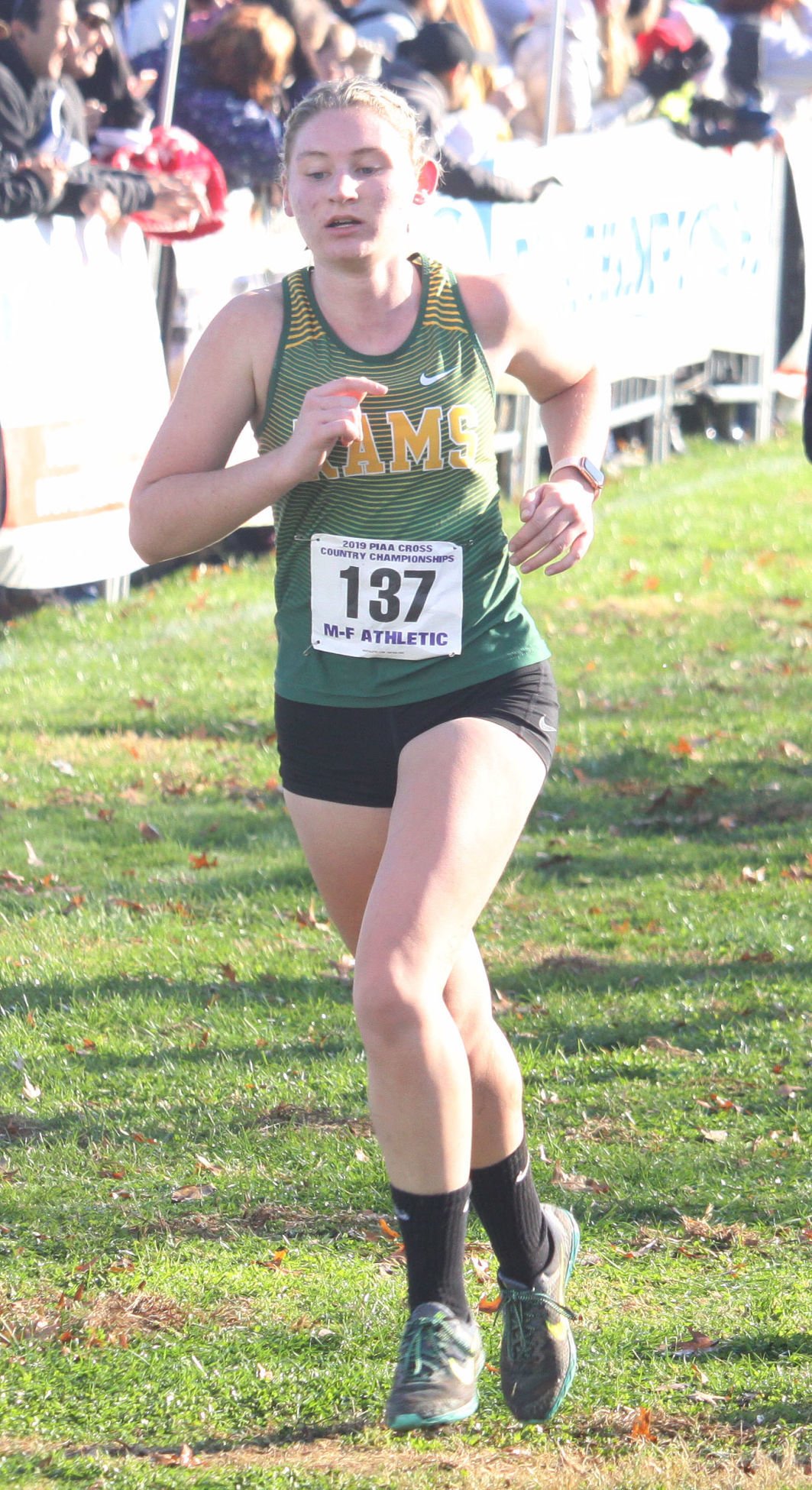 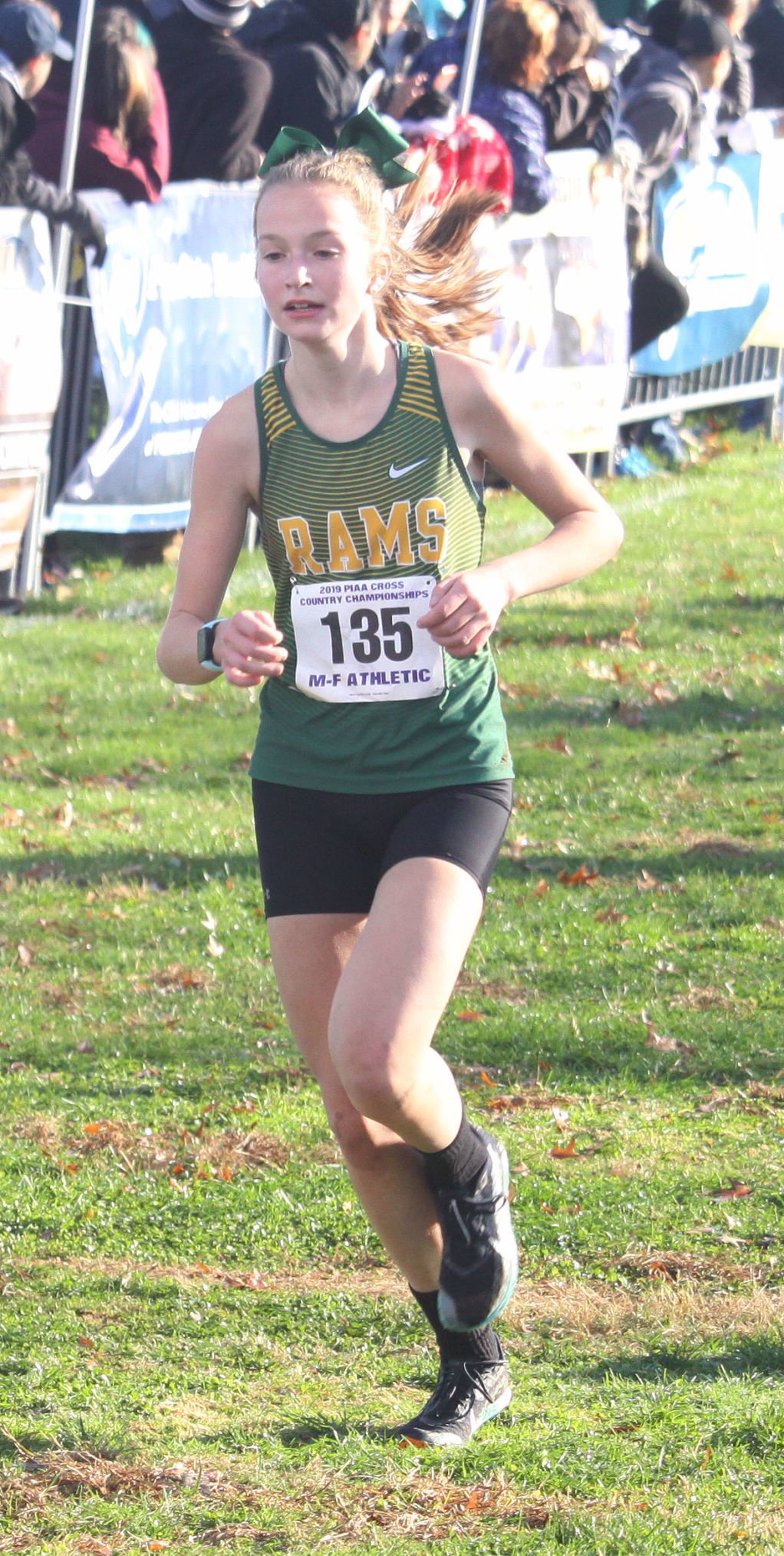 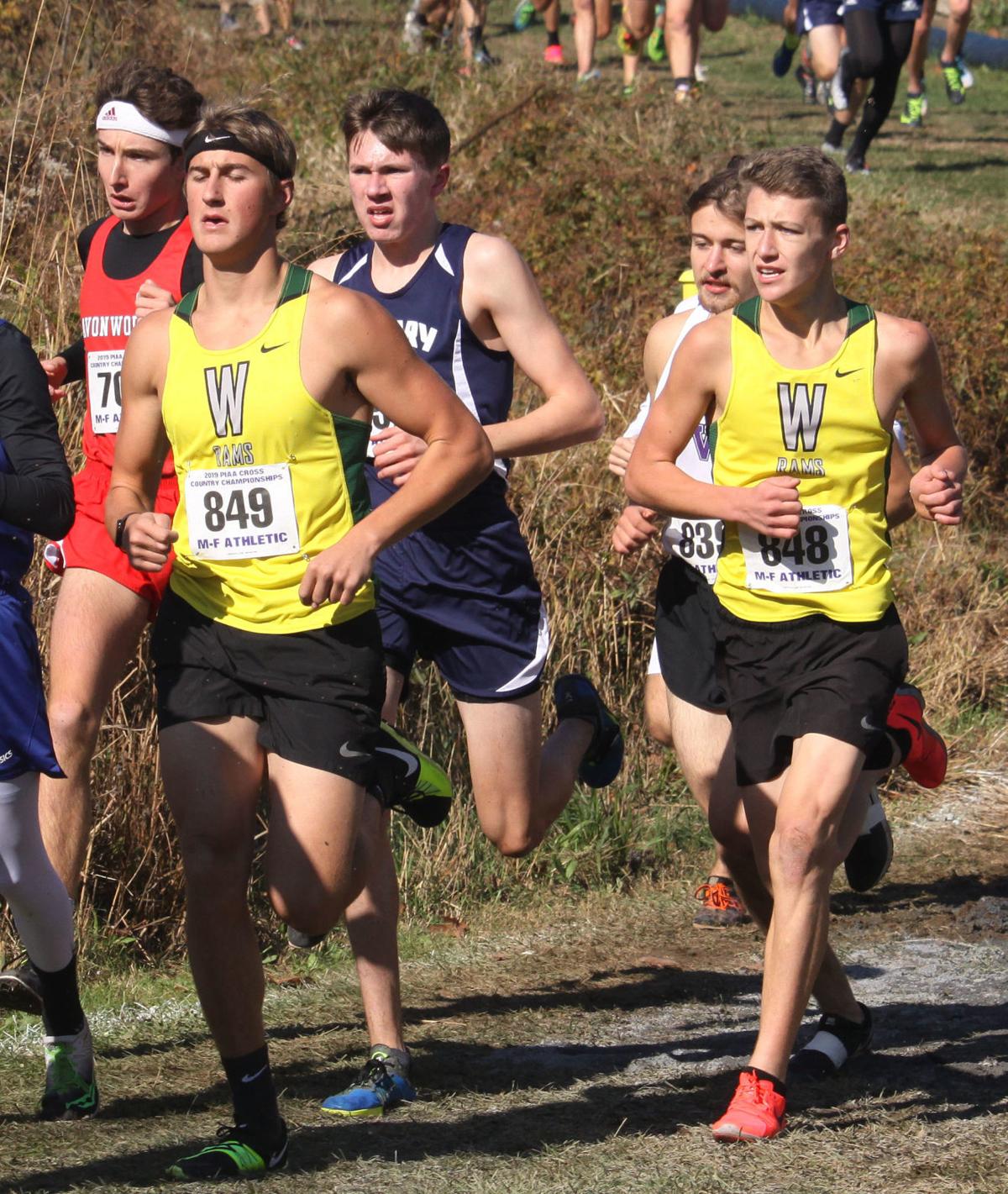 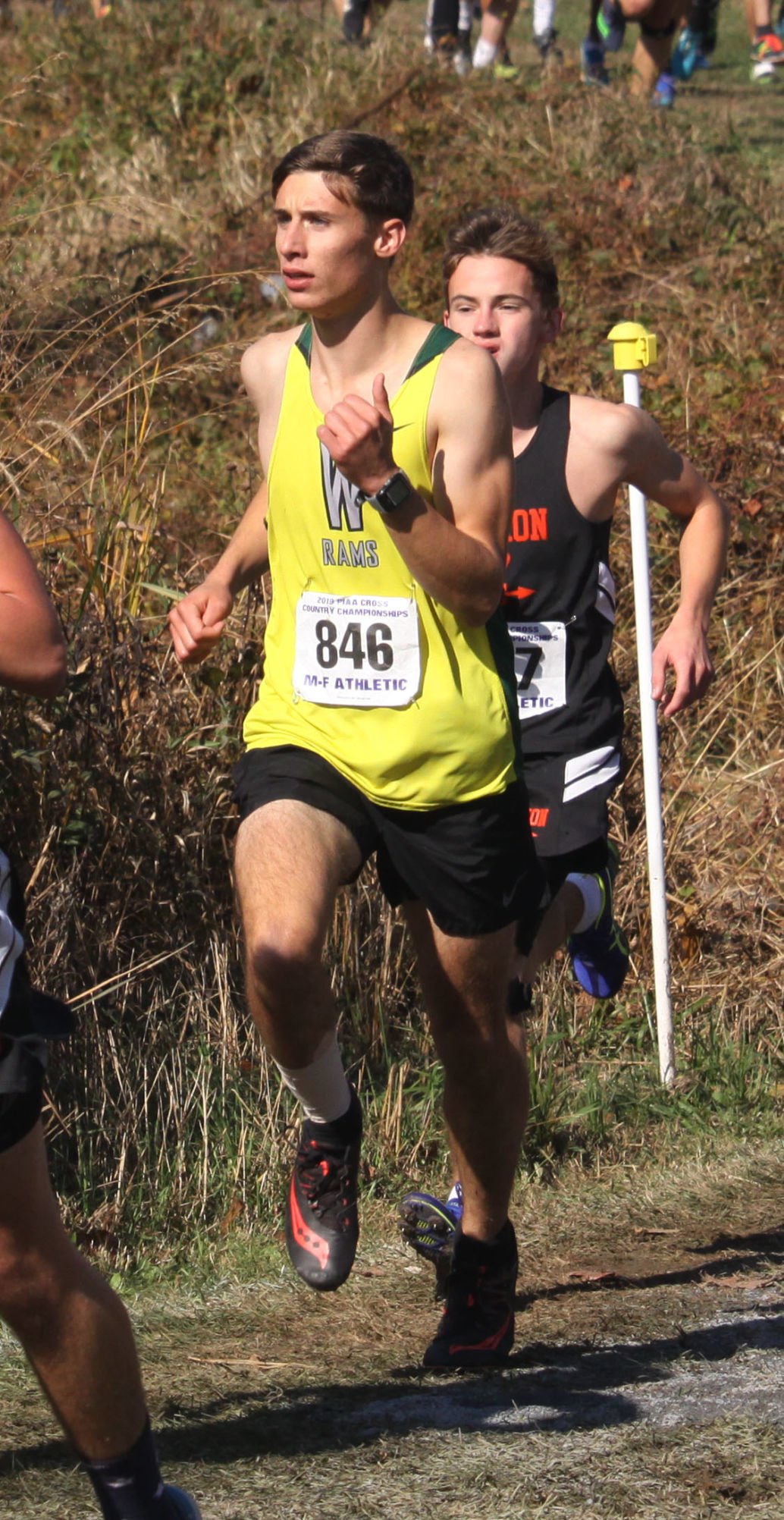 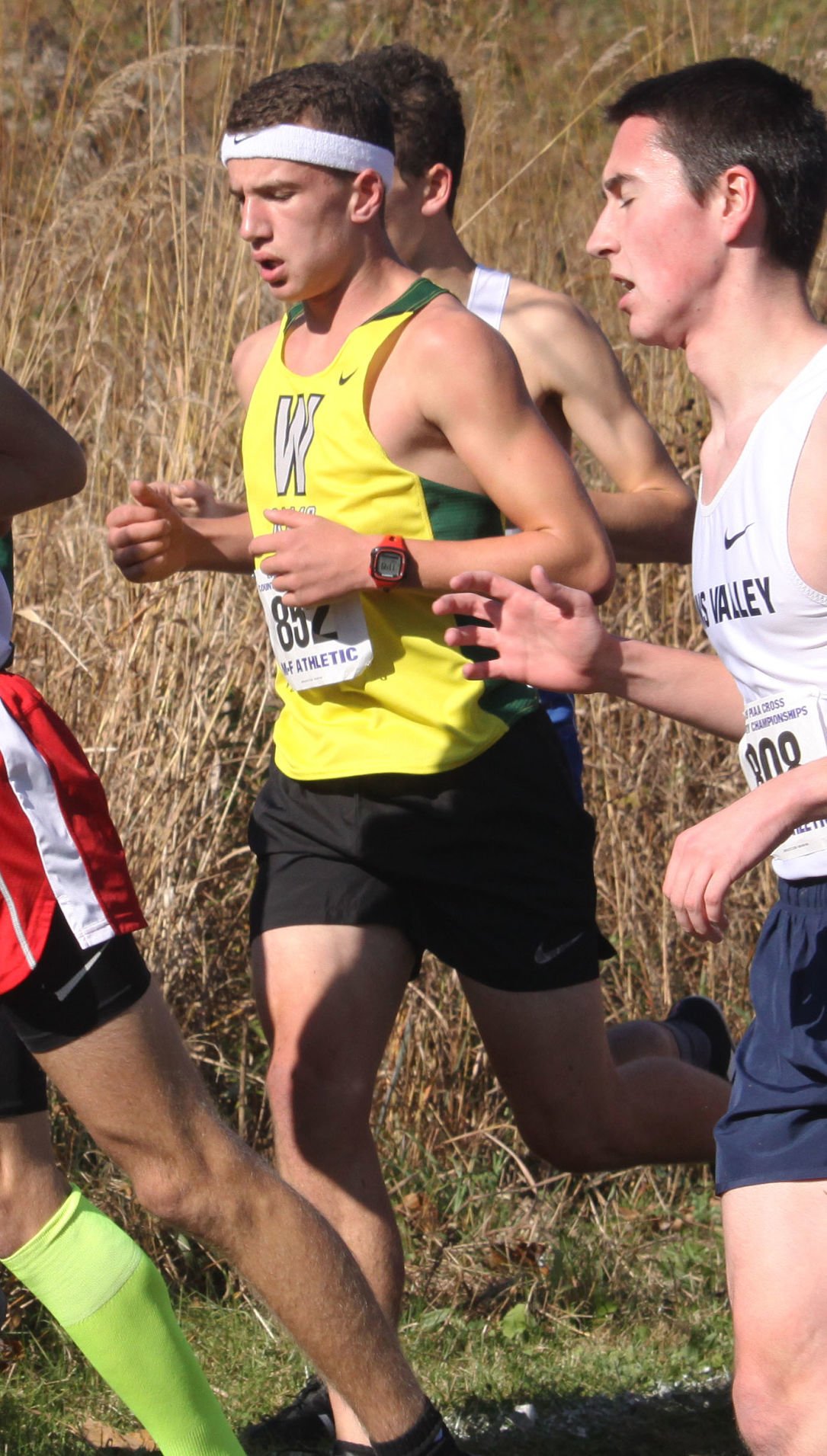 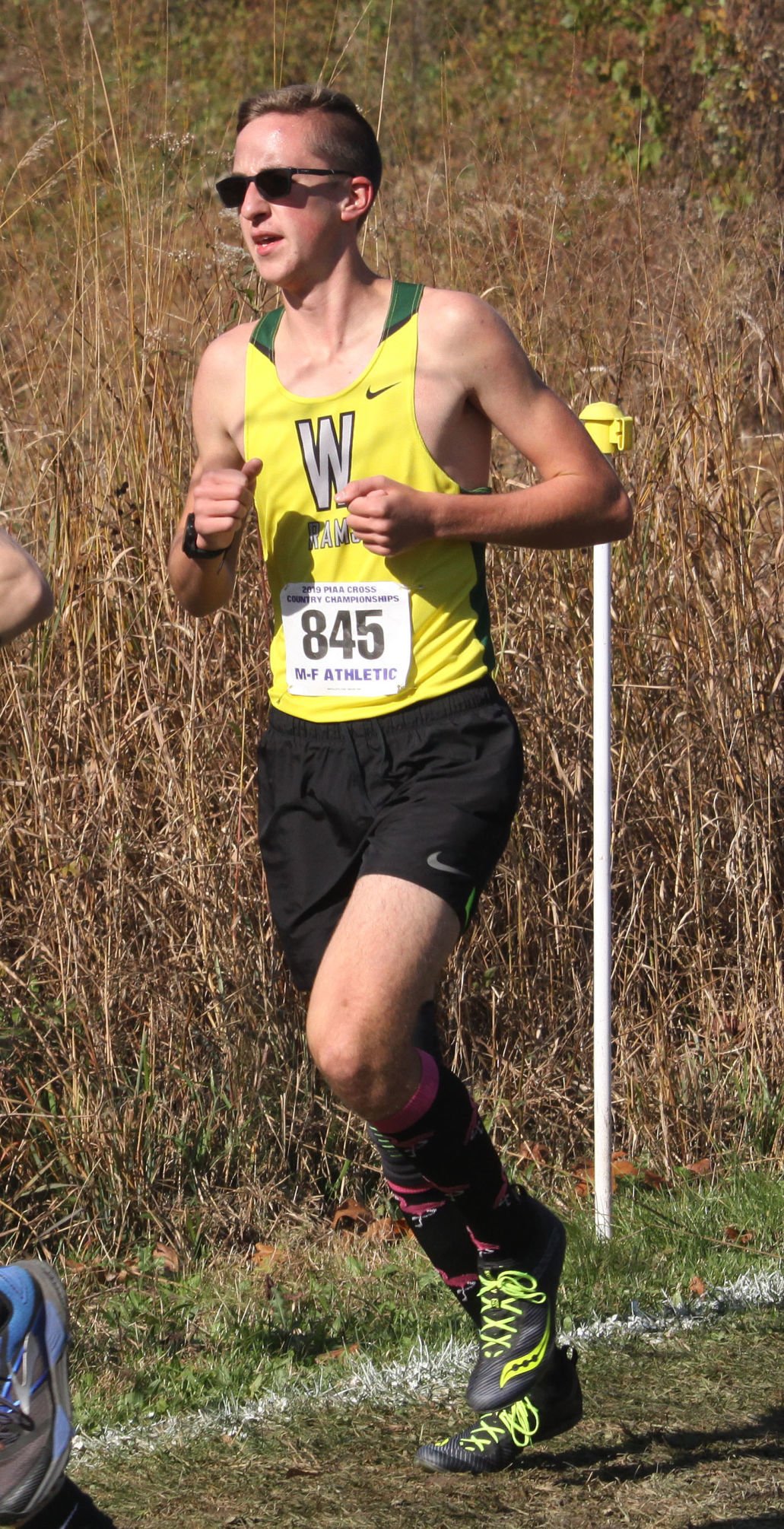 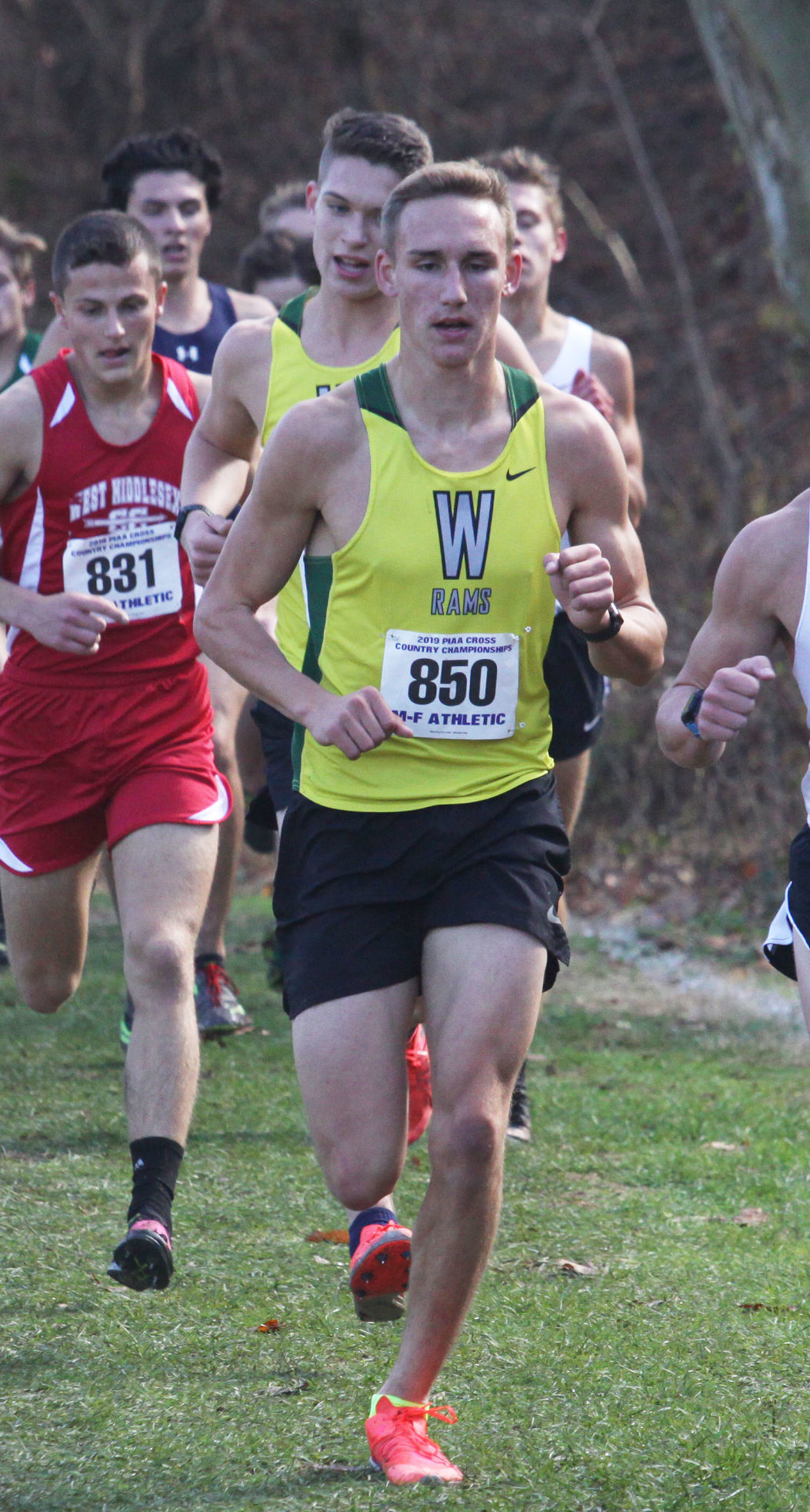 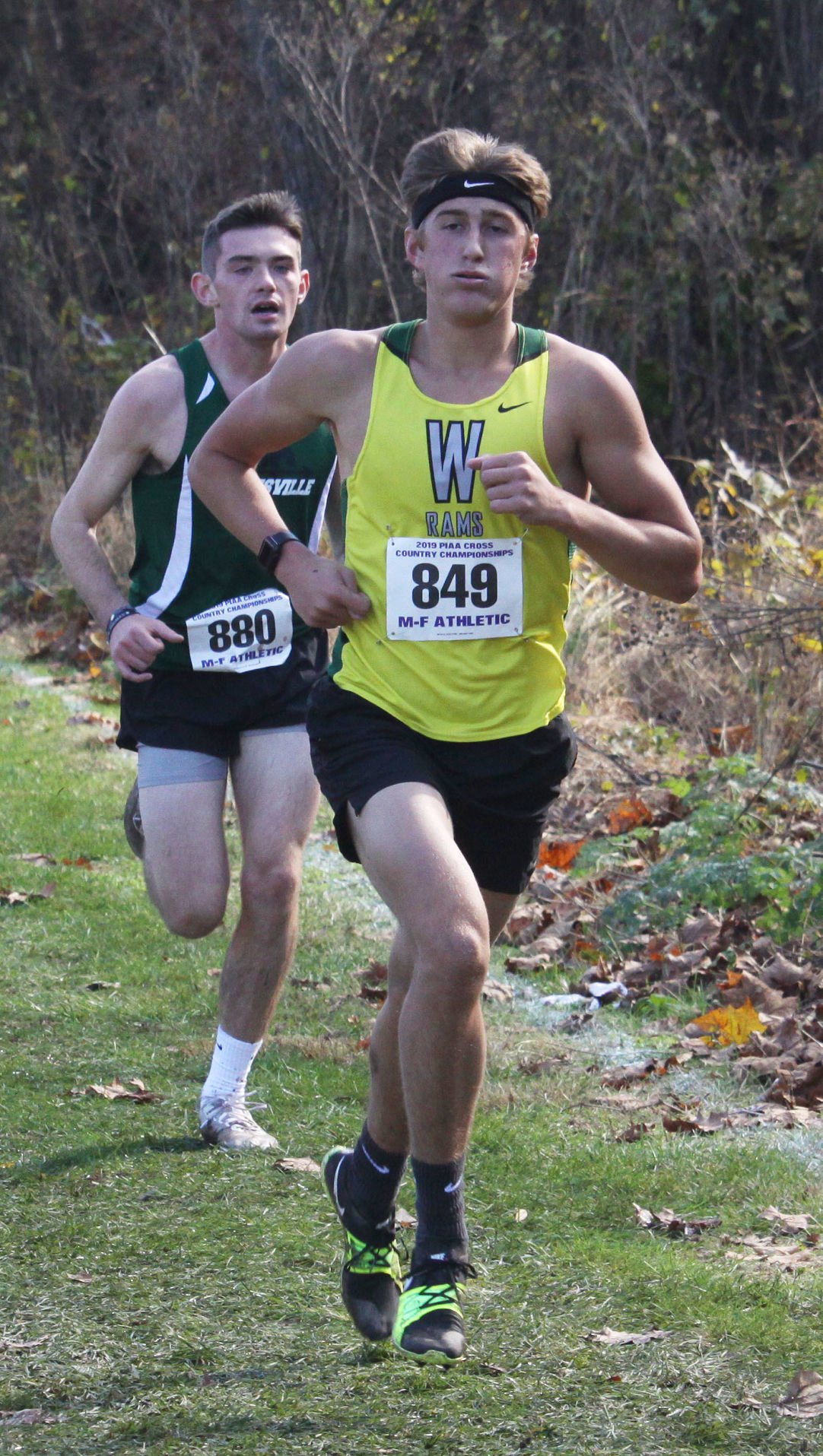 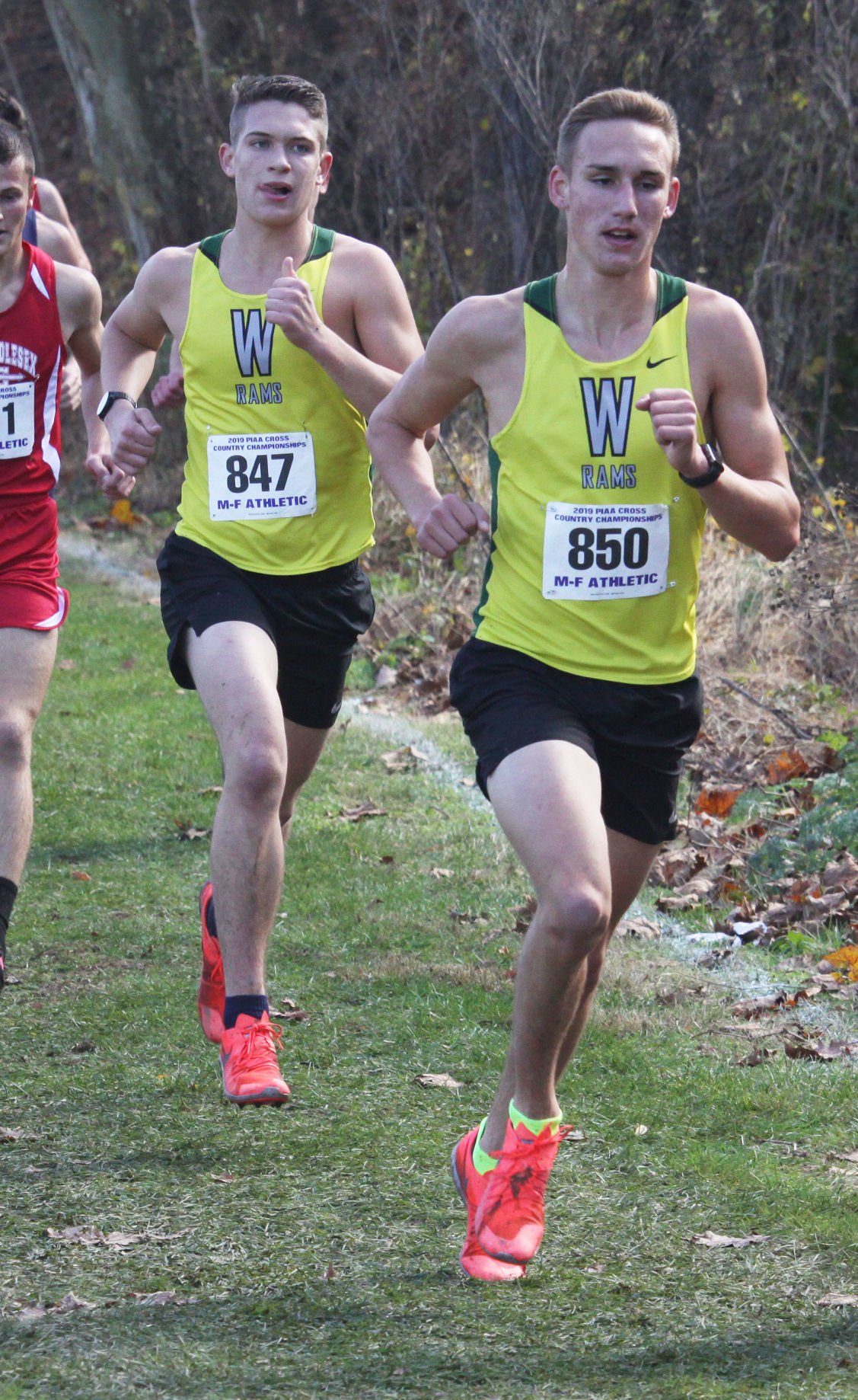 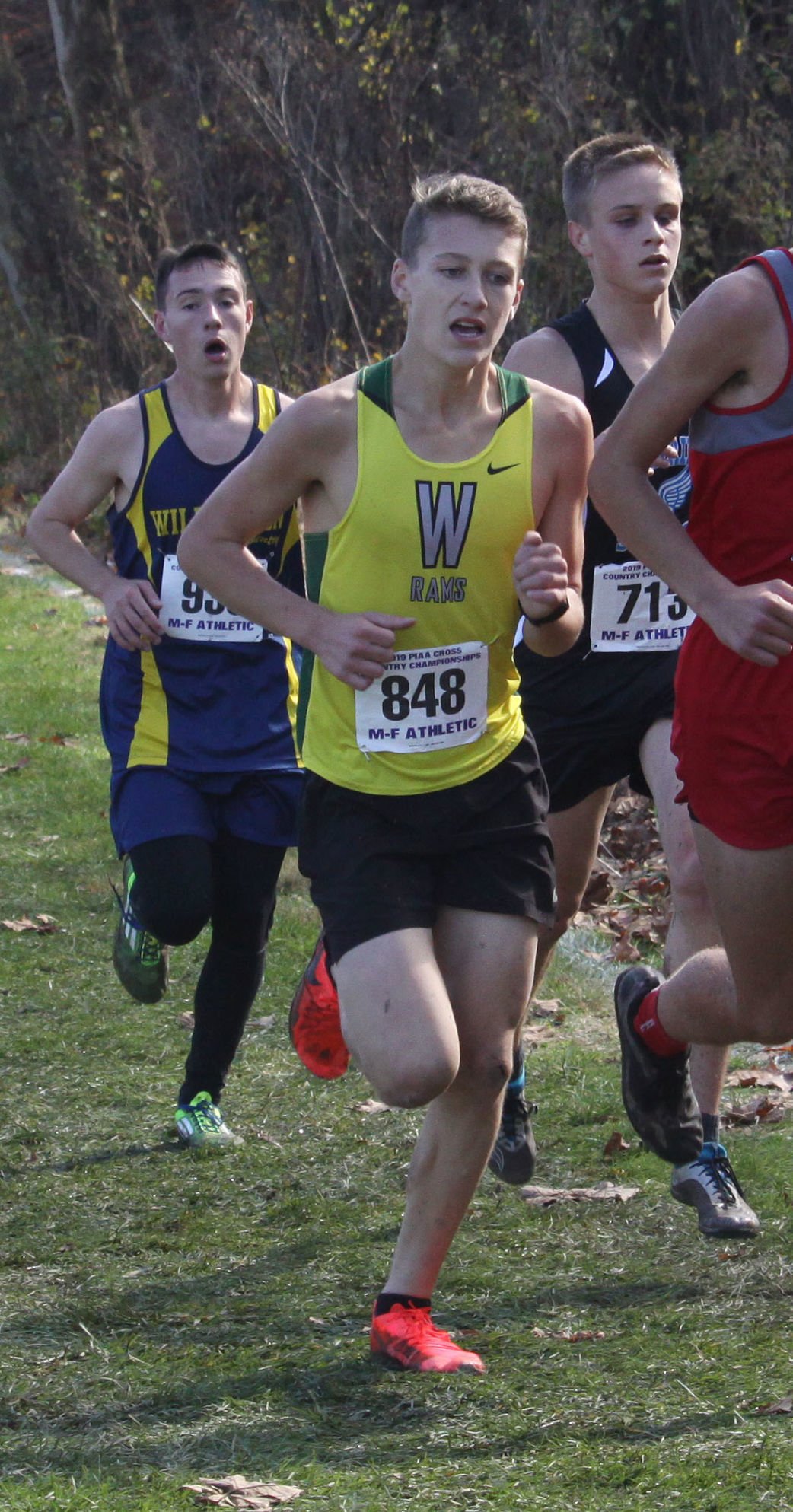 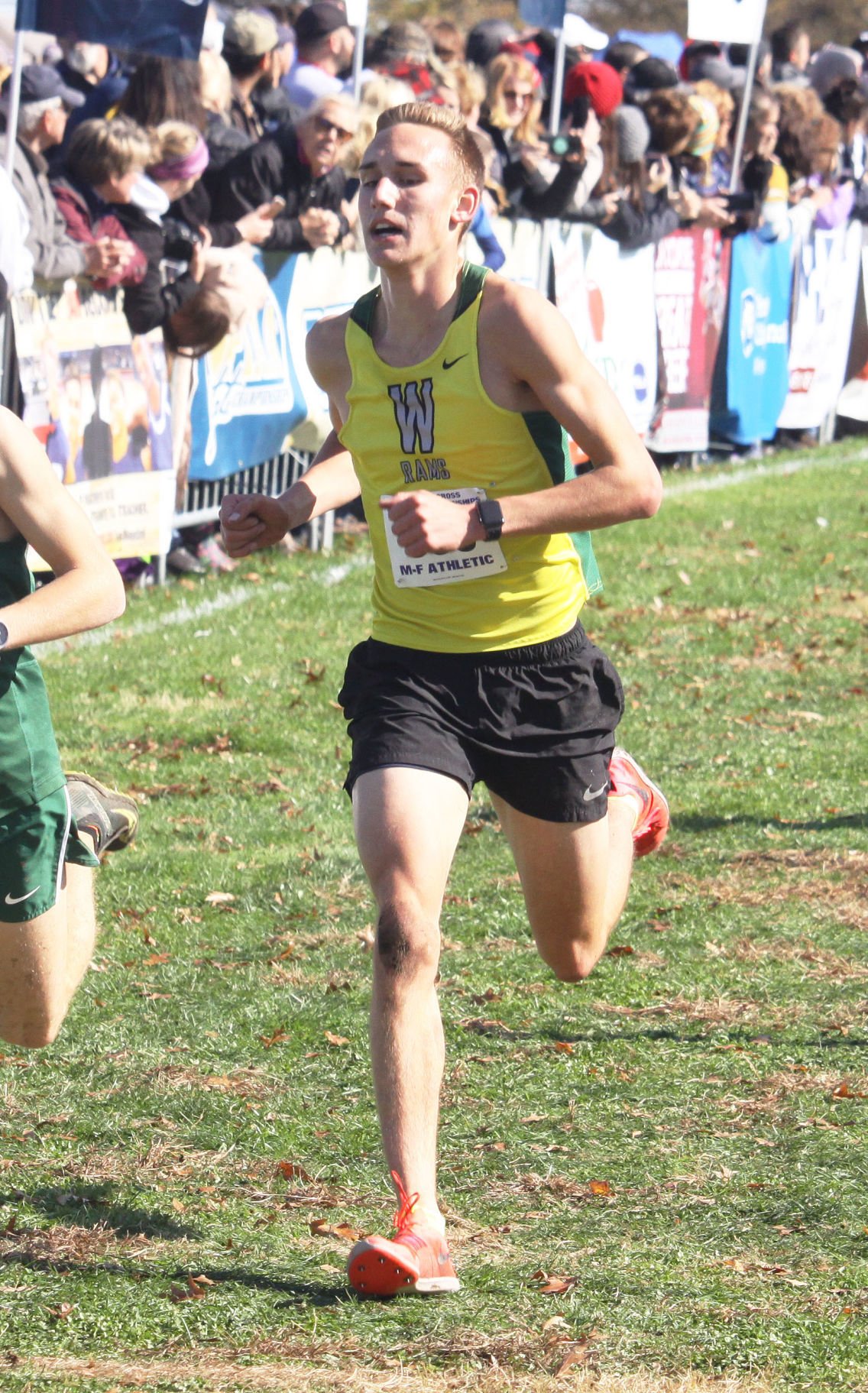 But a tough start put them behind the 8-ball early and they weren’t quite able to get top two as a team, taking fourth with 161 points, just behind Jenkintown (160).

“It was kind of a rough start and with the conditions on the course it took away being able to make up positions throughout as the race went along,” said Wyalusing coach Jim Schools.

Alex Patton (16:48) and Kemuel Laudermilch (16:57) both ended their careers with medals, though. Patton was 11th and Laudermilch took 20th.

“At this point of the season me and Kem were expecting to medal,” said Patton. “We just wanted to finish off the season the best day possible.”

They got caught in a pack at the start, a pack they couldn’t get out of.

“I really got shut in,” explained Kemuel. “I couldn’t move my legs at all. At some point I felt myself walking to try to get around people. The start was really, really bad this year.”

“Usually you’re lucky enough to get on the edge and make some moves,” added Patton. “But when you’re in the middle like that there’s no where to go.”

They were able to make up ground once the pack started to thin out.

“Before we got down on the gravel path going out towards the 1k I tried getting around to the outside to move up,” explained Patton. “Once we got to the hills coach always tells us to maintain pace up the hill and power over the crest and that’s where you’re going to pass a lot of kids.”

They were able to make up some ground but there was a lot of ground to make up for them to reach the top group.

“We were trying to get into that group,” said Kemuel. “When we finally broke away we were really far behind. We had a lot to do.”

Competition was also little stiffer this year, something that doesn’t always factor when going for places year to year. Catch the state meet on an upward swing and runner faster can actually feel being slower.

“I thought they did pretty good,” Schools said about his top two runners. “It took them a while but they going going and both Alex and Kem made up some pretty good spots in the second half of the race.”

Despite the finish they felt, under the circumstances, that was the best they could.

“I know I left it all out there,” said Patton.

Logan Newton (17:25) was just outside the medals in 33rd for his final race in a Rams’ singlet.

“The field was a little tougher than I expected but I think did well,” he said. “Right off the bat states gets packed, I didn’t expect to get that clustered. I broke away at the halfway point.”

He did much better than last year and has been a rock for the team all season.

“We know what were going to get from him in the race,” said Schools. “That give everybody else a lot of confidence.”

“I think that was a big moral boost for the team,” said Schools. “They were all really excited for him to come back. We knew his fitness level wasn’t going to be quite up to the rest of the team but we knew he was going to be pretty decent.”

On the girls’ side the Lady Rams had a good showing, taking 14th with 329 points.

“I’m really pleased with the girls,” said Schools. “As I was looking around I figured that we as a team could run a 1:54 total and that’s what we ended up running.”

Catherine Brown (21:24.8) continued her strong second half of the season, taking 54th overall to lead Wyalusing.

“I think I cut over a minute off my time from last year so that’s pretty exciting,” she said.

“My coach the whole third mile told me to go after her,” said Brown. “She’s right there, the district champ.”

“Catherine had a great race,” said Schools. “Maddie had a great race. Kayla had a good race. Carina struggled a little bit and Sierra was sick yesterday but as a team they really put it together nicely.”

Brown believes this was just a dress rehearsal for next year.

“I knew were a really young group,” she said. “We have no seniors and this is most of my girls’ firs time at states besides me so just getting on the course and experiencing it this year was what we wanted.”