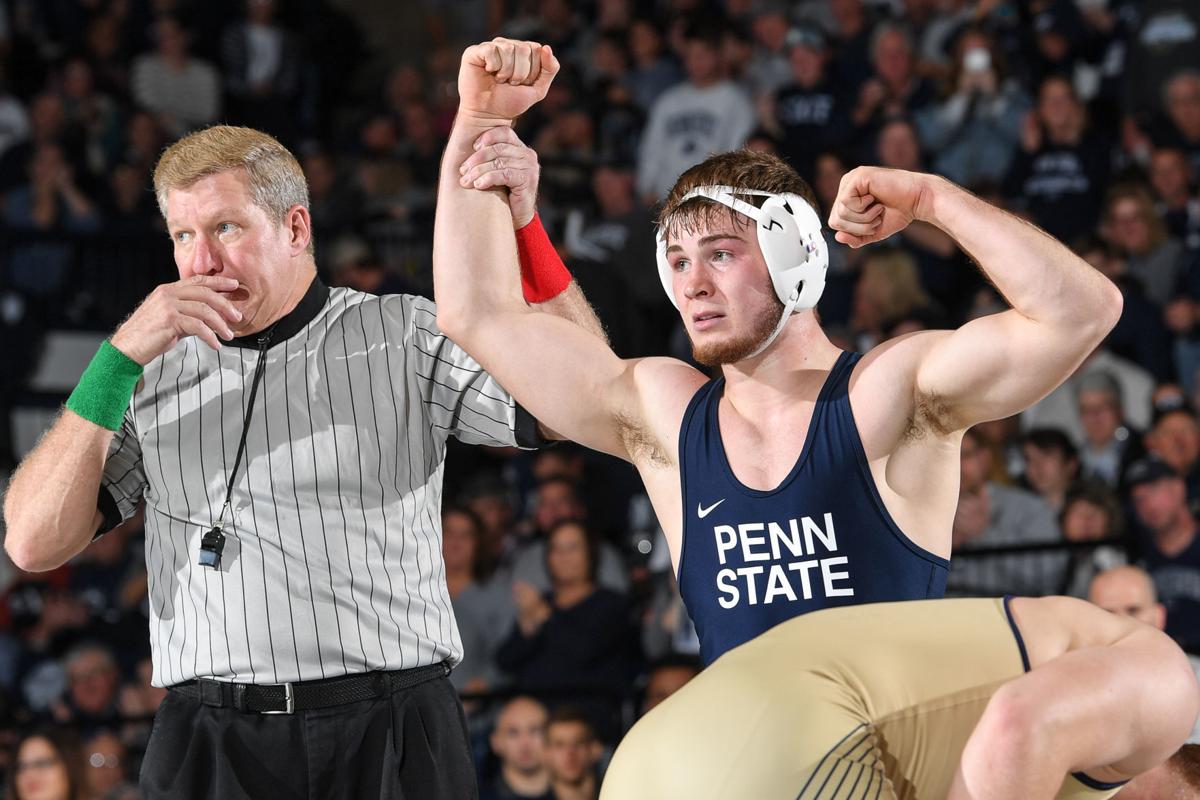 Creighton Edsell defeated Navy’s Andrew Buckley, 5-2 in Penn State’s opening match on Sunday. The No. 1 Nittany Lions opened up the 2019-20 campaign with a resounding 45-0 win over Navy in sold out Rec Hall. 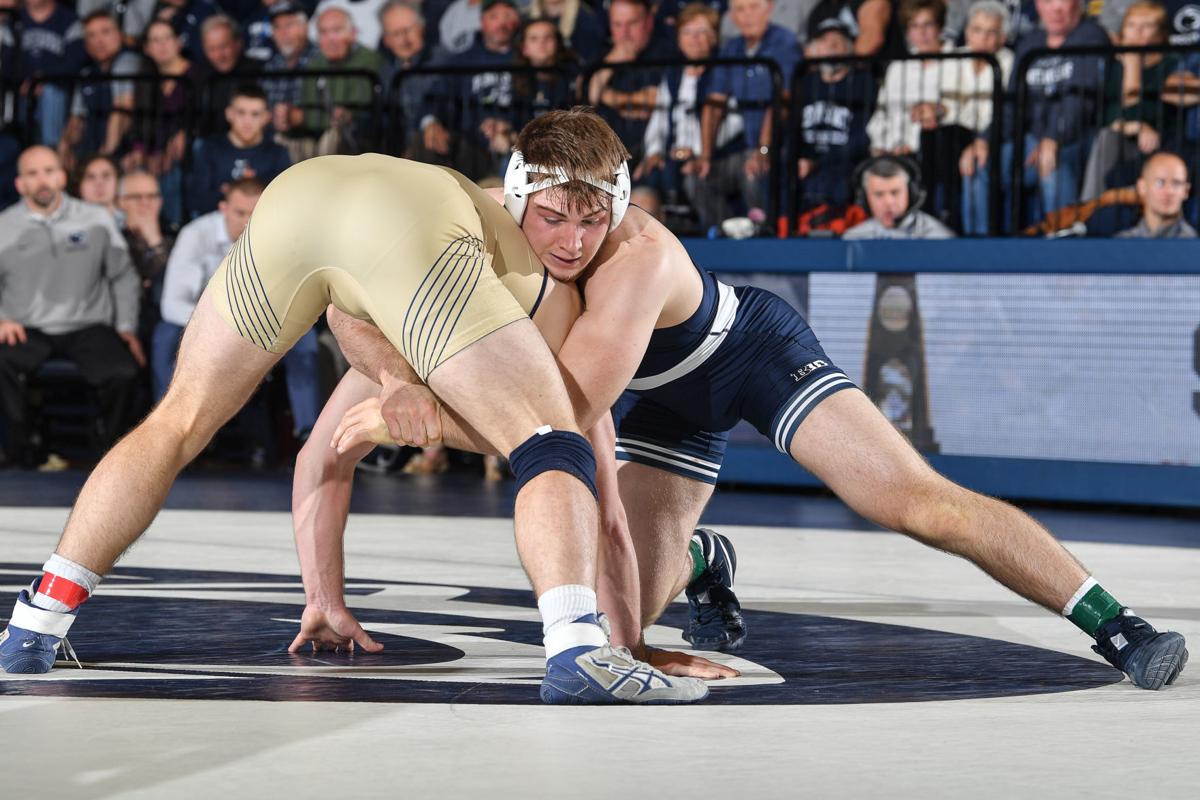 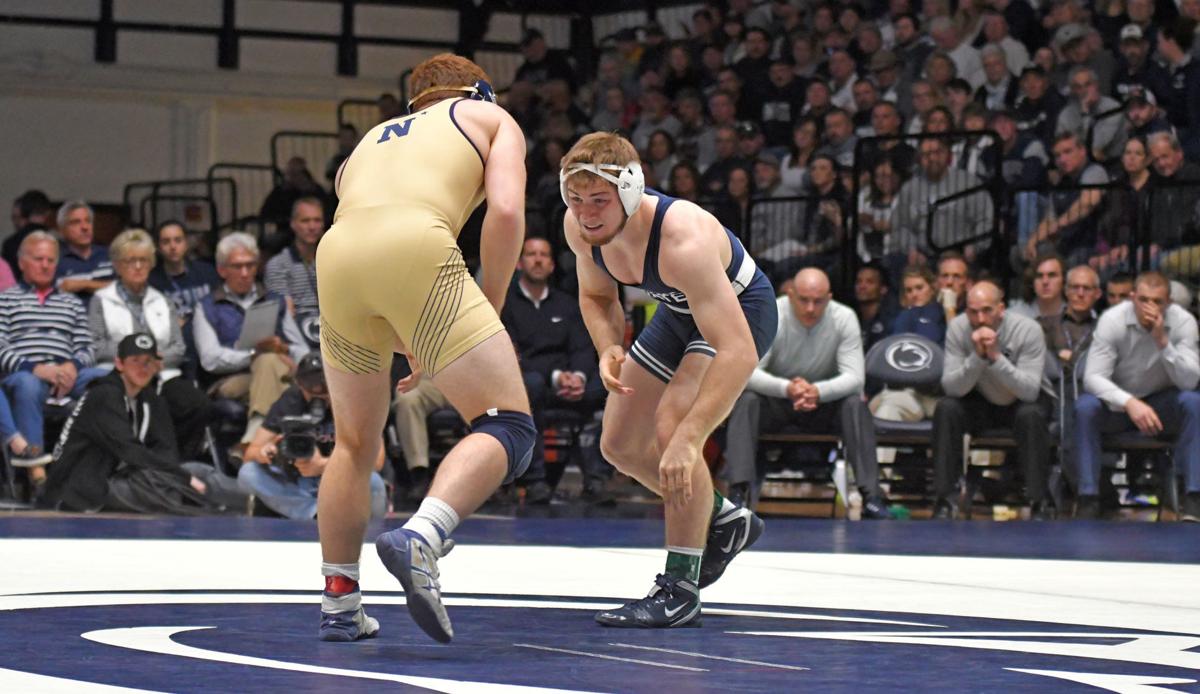 Creighton Edsell defeated Navy’s Andrew Buckley, 5-2 in Penn State’s opening match on Sunday. The No. 1 Nittany Lions opened up the 2019-20 campaign with a resounding 45-0 win over Navy in sold out Rec Hall.

UNIVERSITY PARK- A year ago Creighton Edsell was injured, missing an entire season of wrestling.

On Sunday afternoon the Wyalusing grad was on one of the biggest stages possible, in the lineup for No. 1 ranked Penn State in a dual meet against Navy at Rec Hall.

“Yes, for sure it is a dream come true,” Edsell said of making his dual meet debut for the Nittany Lions. “And, to look back at where I was a year ago, it’s crazy. Last year having a torn labrum at this point in time, sitting out the whole season, just kind of makes me look back and just reminds me of how grateful I am to have an opportunity like this.”

For Edsell, a moment like Sunday is very special.

“I haven’t wrestled since my senior year at PIAA states, so to get back out there and do my thing felt so good,” Edsell said.

“I am just blessed with the opportunity.”

Edsell made the most of his opportunity as he beat Andrew Buckley of Navy 5-2 at 184 pounds as the Nittany Lions won 45-0 in front of 6,490 fans, the 49th straight sell out at Rec Hall.

“Obviously everyone likes to win, no one likes to lose, yes it was that much better to win, but my main focus going into that match wasn’t worrying about winning, just scoring points and having fun.”

Stepping in for the injured Shakur Rasheed, Edsell and Buckley spent the first minute locked in a scoreless match. Buckley took a shot at 1:30, but Edsell fended off the shot and the match stayed scoreless.

Edsell then worked his way in on a high single and took a 2-0 lead with a takedown on the edge of the mat with 1:05 on the clock.

Buckley escaped to make it 2-1, and Buckley choose down to start the second period and got another escape to tie the match at 2.

The Penn State redshirt freshman Edsell eluded anther Buckley shot at 45 seconds and Edsell got an escape to start the third period at 1:40 to go on top 3-2 and a late counter by Edsell sealed the 5-2 victory.

For Edsell, being in the starting lineup for the No. 1 team in the country was special, but it is also something he’s worked hard for.

“It felt awesome, but honestly, right at the same time I’ve visualized myself being in the lineup ever since I got here,” Edsell said.